Marginally More News To Me 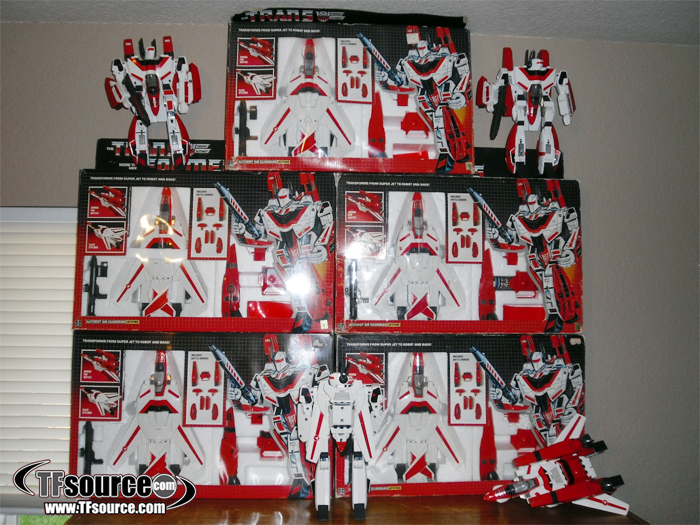 Under the weight of newer Transformers products, one can sometimes find it hard to keep up with every new variant and development that comes along, never mind continue to catalogue the unyielding tide of vintage discoveries that continue to be made. In some cases, the vintage revelations are news to most of us who hadn’t paid close enough attention to certain areas of G1 Transformers, while to others it is knowledge hard earned from giving particular niches of the hobby distinct focus and commitment. The beauty of this community is that eventually, it will all make its way to the surface and continue to decorate the Transformers G1 tapestry.

This week we continue our “News To Me” series with features that are slightly less ground-breaking and undiscovered than in past chapters. Maybe it’s because in the last 6 to 8 months I have completely moved away from vintage Transformers, or maybe because the discoveries are genuinely slowing down, either way there are no brand new Diaclone or minibot colour variants this week. Having said that, the items in this article are fully worthy of notice and as the title says, very much news to me. 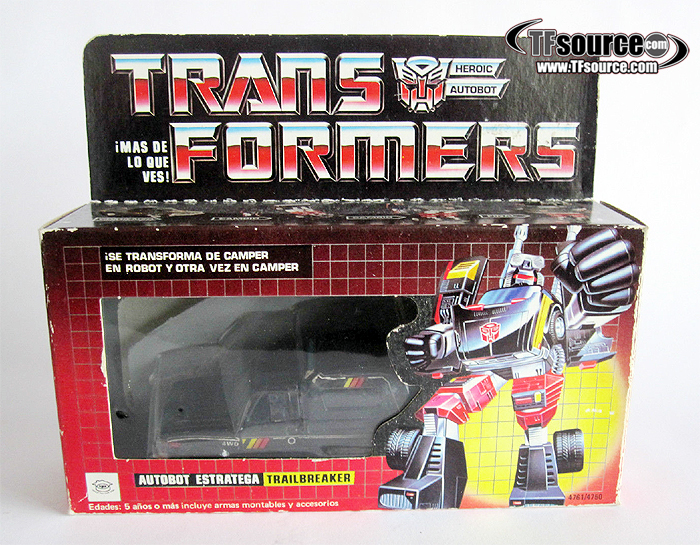 Looks exciting in there, huh? 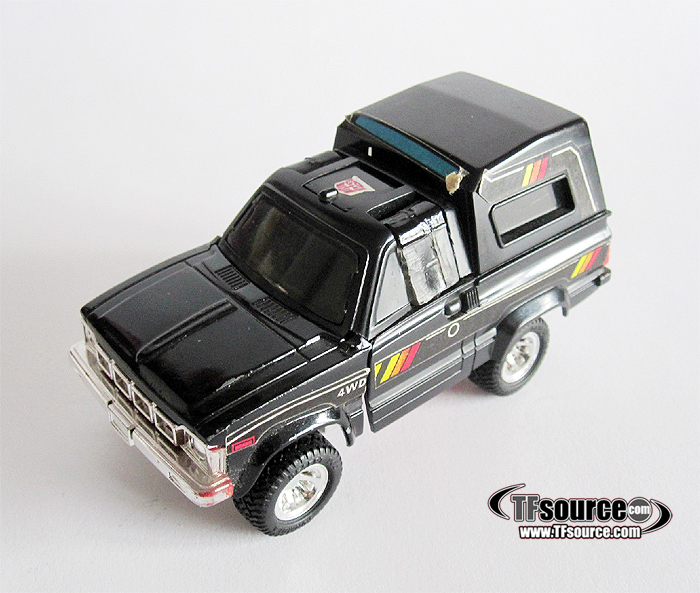 On the face of it, there is nothing spectacular or noteworthy about the Mexican release of G1 Trailbreaker, other than its manufacture by Plasticos Iga in Mexico as opposed to Hasbro or Takara. There is no rubsign, the factory stickers are of lower quality to Hasbro and Takara release, and the paint probably contains traces of lead! Typical Mexican variant then, with some minor paint and moulding differences thrown in.

Or is it? Compare the above with another boxed Trailbreaker from Mexico: 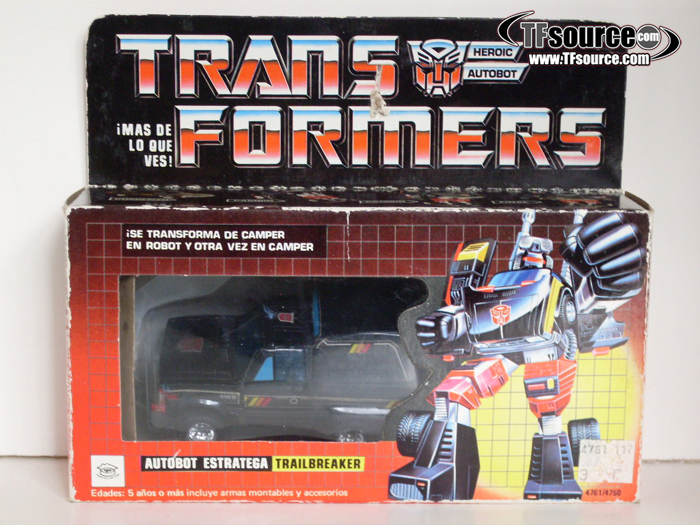 Spotted it yet? Of course not, it’s really not that massive a variation or significant a difference. If we look at a normal Hasbro or Takara Trailbreaker, the driver and passenger-side windows have a triangular blue sticker and then a clear blue plastic section to mimic windows. That blue translucent plastic doubles up as the robot’s shoulder joint. The figure also has a blue translucent windshield. You can see the blue window in the second boxed Mexican Trailbreaker above in vehicle mode, and you can also see it in a regular Takara-manufactured pre-Trailbreaker in robot mode below: 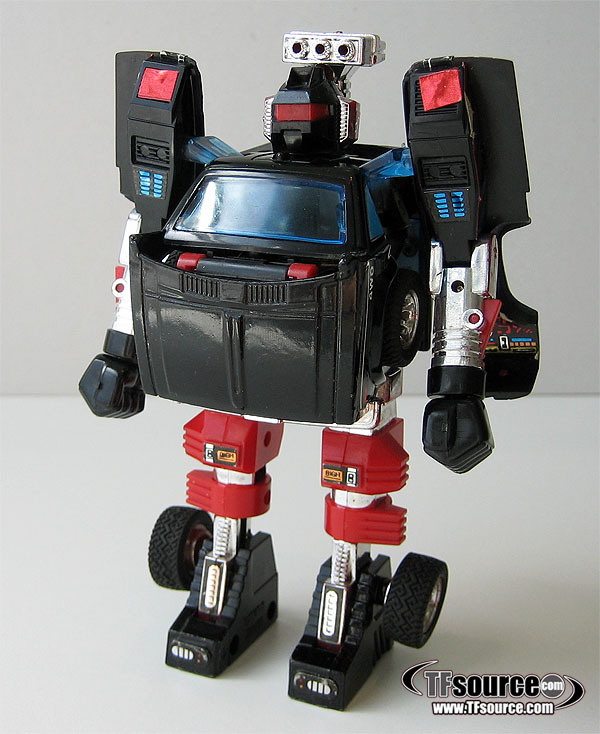 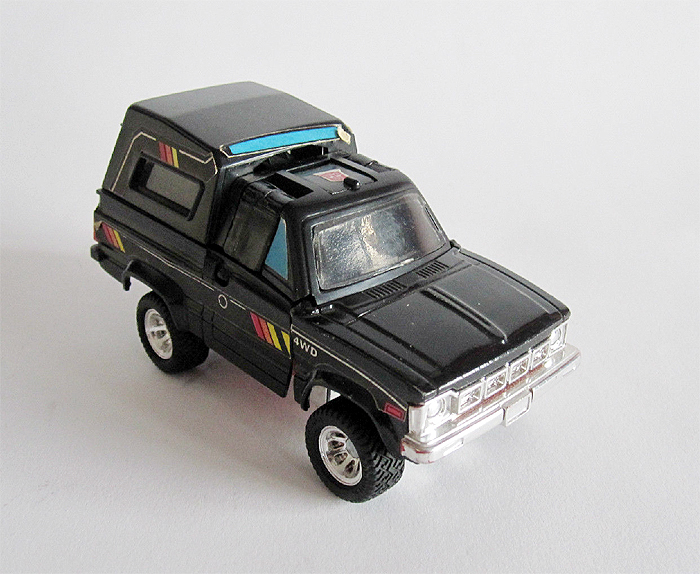 They are in fact colourless, almost black in fact. Now this is the only variant of Transformers Trailbreaker that I know of which doesn’t have translucent blue windows. You have to go back to Japanese Diaclone Hilux 4WD toys (black, blue and yellow versions) to find this toy with clear translucent windows not tinted blue. Our second boxed Iga Trailbreaker above shows that even within Mexico, there is a blue window version. Like I said, the world hasn’t changed, but for Mexican variant enthusiasts it’s one more to add to the list.

It doesn’t end there for Mexican Trailbreaker though, have a look at the colour of the cardboard between the cellophane window and the artwork on the box front: 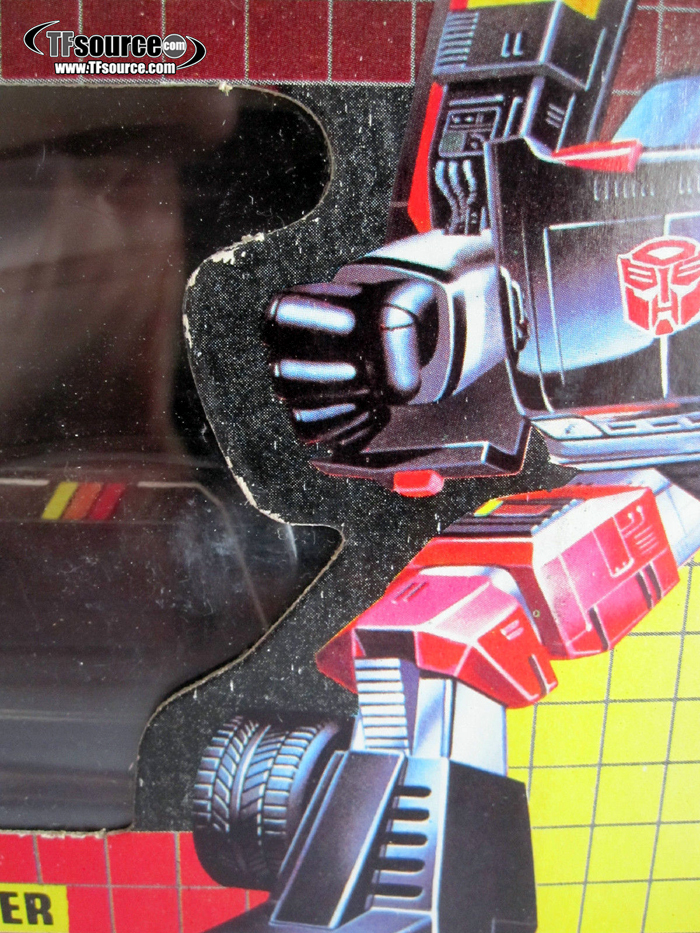 No Grey, No Grid!

By now most of you who follow this blog will be familiar with “NGB” (No Grey Border) variant G1 packaging from the US where that section between the art and the window contains the same coloured grid pattern as the rest of the packaging. G1 boxes very quickly changed that section to all grey, but Iga Trailbreaker goes one step further and has that section coloured black. Once more, not a massive eye-catching difference, but a difference nonetheless. This is definitely a quirky little release that was previously (and probably still remains) totally overshadowed by the bizarre Mexican Hoist. 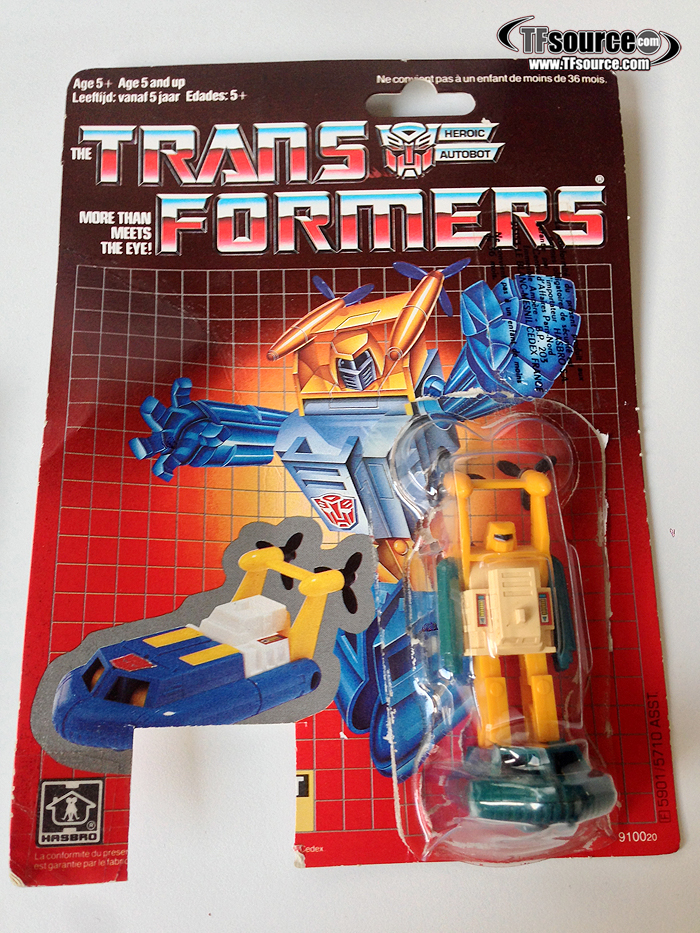 What could be more exciting than a Seaspray variant? I did warn you! In all seriousness, for those of us who collect and document European G1 Transformers from the earlier years, this is a major discovery and confirmation. Some minibot collectors had suspected for a while now that strange G1 Seasprays and Cosmos variants in their collection might be from the bizarre short line of variants that Ceji in France manufactured for Hasbro/Milton Bradley in mainland Europe before the company folded. 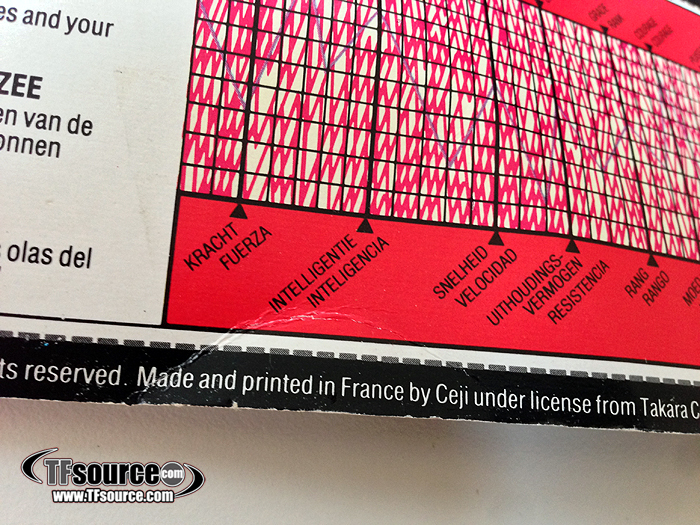 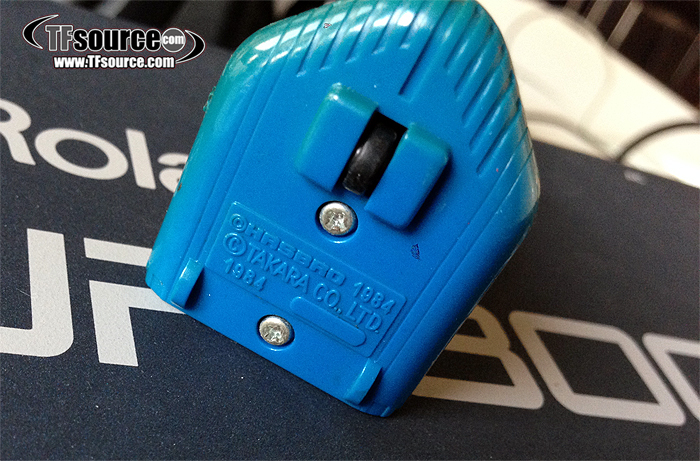 Being slightly diffferent to the normal G1 or Chinese Seasprays, the copyright had thrown collectors for a loop. There are no known Mexican Seasprays either so the block over “Japan” was a mystery, until the carded Ceji showed up above. Ceji are known for more exciting variants such as G1 Yellow Devastator,  blue and white “Pipes” Huffer (or Puffer), red-foot Optimus Prime, hard nose/black plastic wheeled G1 jets, orange-chested Insecticons and the like, but their range of toys made for Hasbro Bradley in Europe seems to expand by the year as further packaged discoveries are made. 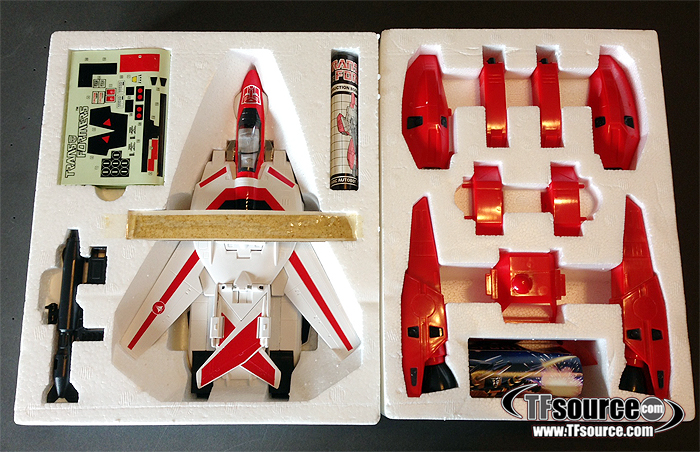 Stops you dead every time

Now, a reward for those of you who made it this far. No more beautiful a sight exists in G1 Transformers than a boxed, mint G1 Autobot Air Guardian Jetfire. We discussed the origins of this mould from the wonderful world of Macross a few weeks ago in our “Pre-Deluxe” article, and the above Matsushiro variant G1 Jetfire is one of the real gems of the early North American Transformers scene. 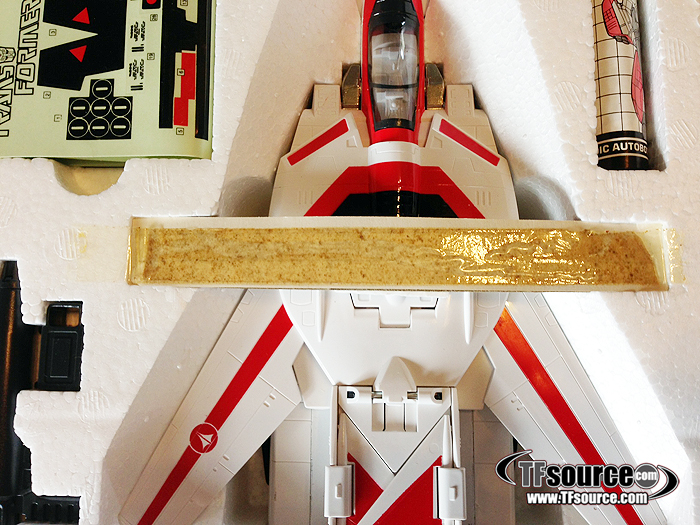 This isn’t news though, the “rare” Jetfire variant that still has the Macross-style “U.N. Spacy” logo sticker on its wing is very well known throughout the community. That throwback to its Macross heritage is not the most surprising thing about this variant though, and neither are the early versions which have “Matsushiro” stampings, notched Macross-style antennae or even the painted logo versus stickered logo on the wing. What really got me recently about this toy after speaking to a couple of Jetfire experts was the stickersheet. 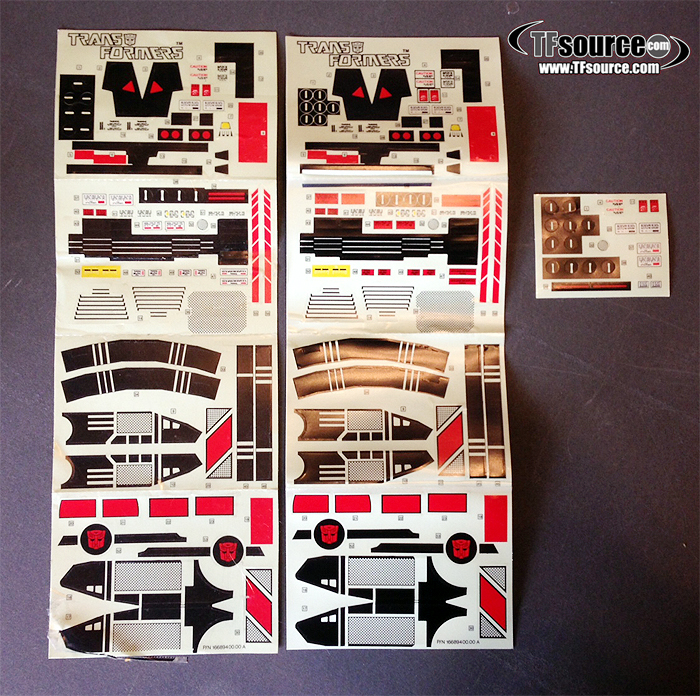 To quote Rich Schulze: “As you can see on the right, the Matsushiro has the same two lower sections as the Bandai, but at the top there are many different stickers and what’s very noticeable is the black border that goes around the Matsushiro stickers. Look at the caution sticker on the right and then look at it of the Bandai one to the left. It’s not there”.

It’s not just that a number of stickers show marked differences that shocked me, it’s the fact that the Matsushiro has a completely separate extra little stickersheet! 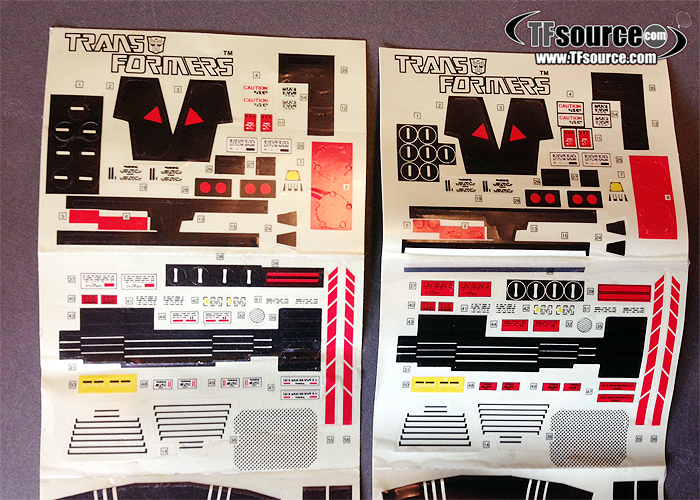 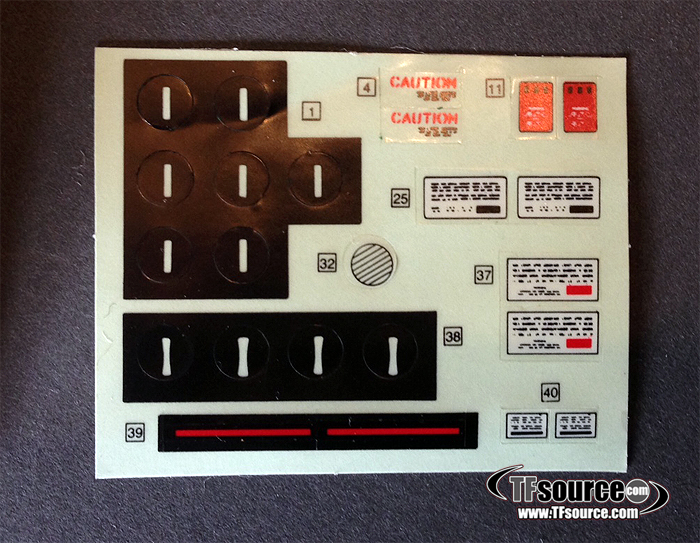 “Also notice the black circle line up on the Matsushiro vs Bandai. Matsushiro his the same six in a row and one off to the right, whereas the Bandai has the 7th one on top and the circles have no border going around them. I can go on and on about how many differences there are.

“Looks like the extra sticker sheet with the Matsushiro was used to eliminate the red stickers on the second section of the Matsushiro along with the red lines as well to finally make the Bandai version”.

Rich is also adamant that no Matsushiro Jetfires came with missiles and that it is an urban myth, and that for the most part it is the sticker-wing logo versions that have the notched antennae and the painted-wing logo versions have smooth antennae. To be able to produce the picture seen at the head of this article, the Matsushiro Mountain, one must have handled a few of these things and so I’d have to defer to his experience on this one. 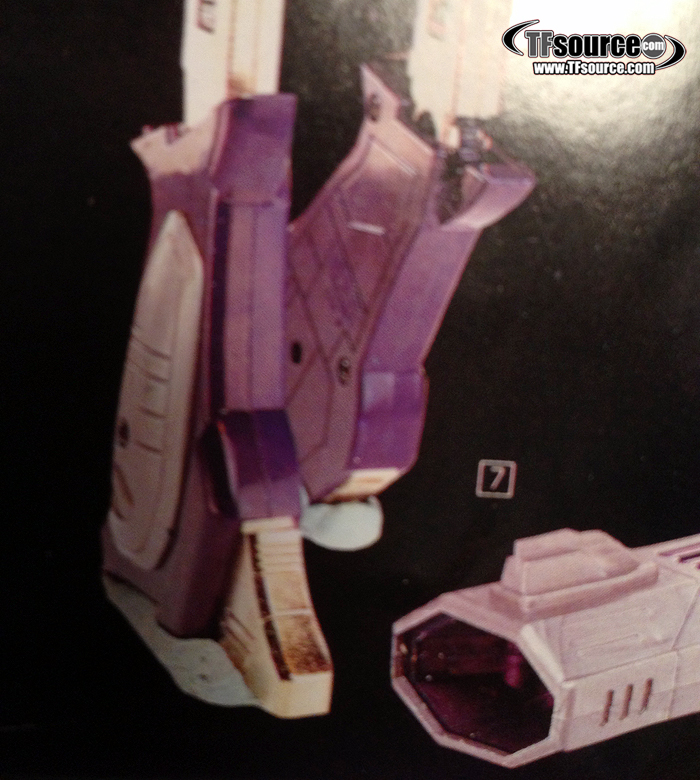 Strike a pose. With Blu Tak.

To wrap up, a few more things I came across recently that resulted in one eyebrow finding itself positioned higher than the other. The above image of the 1985 US Hasbro Transformers catalogue – the incredibly common one – shows G1 Shockwave in a very appealing walking pose, albeit with copious amounts of Blu-Tak holding the shaky bugger in place! 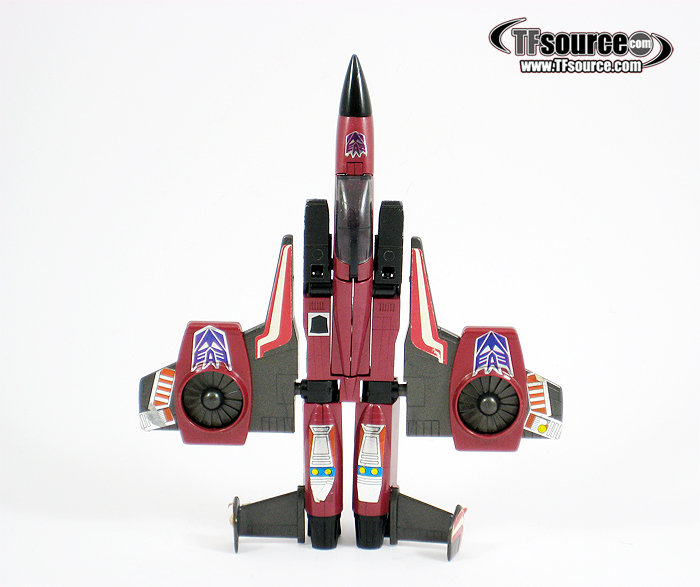 Can you see the nosecone isn't rubber? 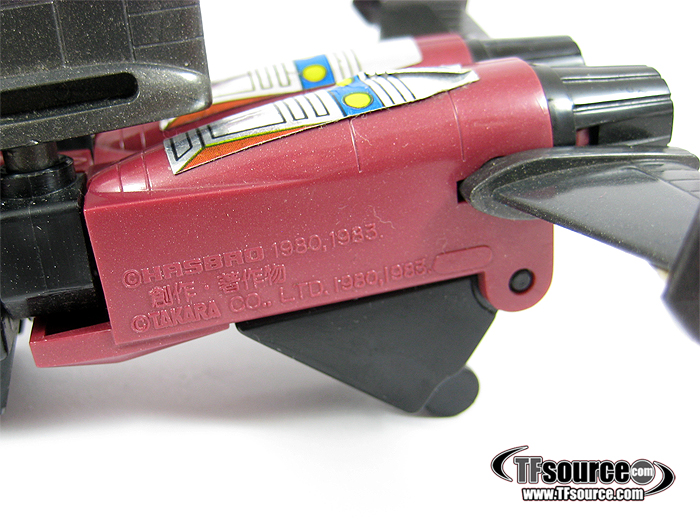 The European Ceji-manufactured Thrust from 1986 was also a confirmed release, but thanks to Marco Salerno’s kind gift I was able to inspect one in person. As expected, the nosecone is solid hard plastic (like Ceji Starscream, Dirge and Ramjet), the wheels are black plastic instead of silver die cast metal and the copyright blocks out Japan as country of manufacture. This toy was of course manufactured in France by Ceji and released across many mainland European countries.

One hopes that bigger discoveries and untold stories lie just around the corner, and certainly with the very recent uncovering of a 1983 Tokyo Toy Show video showing prototype Diaclones and other amazing Japanese toys of the time, those hopes have every chance of being answered. 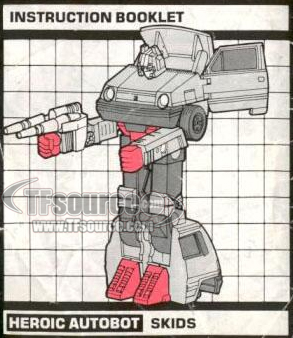 Many kind thanks to Rich Schulze and Mijo for amazing contributions this week, I would have been lost without you guys this time.

Marginally More News To Me