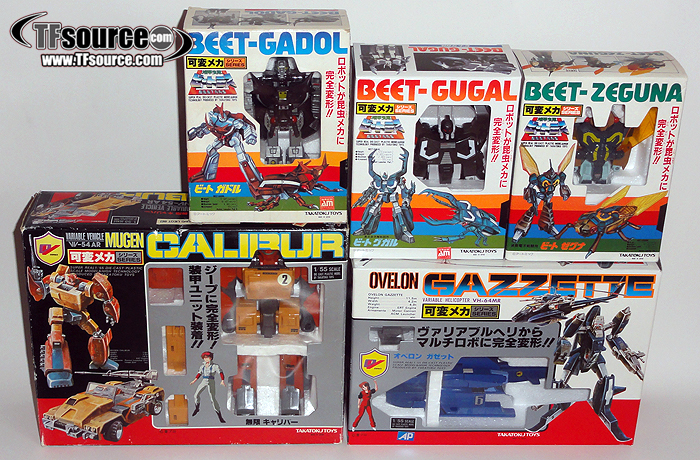 Just as the Takara-designed Autobot Cars, minibots, Decepticon jets, Megatron, Soundwave and his cassettes have their roots in the early 1980s Takara Japanese toy-lines Diaclone and Micro Change Series, a number of non-Takara Transformers – like the Deluxe Insecticons, Deluxe Autobot Vehicles, Omega Supreme and Jetfire – originate from older Japanese toy lines as well.

Last week we had a look at the Transformers Deluxe Insecticons Venom, Barrage, Chop Shop and Ransack, Autobot Air Guardian Jetfire, Deluxe Autobot Vehicles Whirl and Roadbuster together with Autobot Defence Base Omega Supreme. We discussed their origins a little, but this week we will actually start having a look at the Pre-Transformers toys that spawned those beloved figures that originally helped pad out the 1985 Hasbro Transformers selection in the Western world. 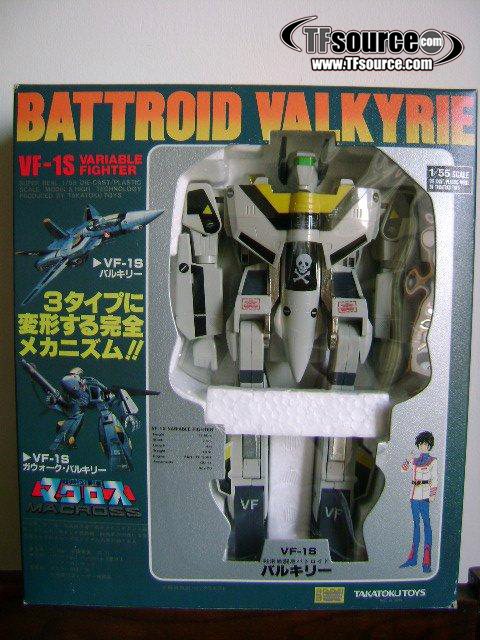 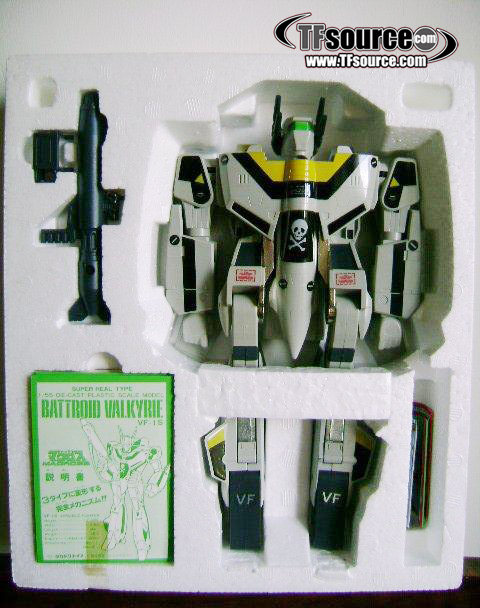 Last week, our first featured toy was the Autobot Air Guardian Jetfire whose origin lies in the Japanese toy line The Super Dimension Fortress Macross, so why not start there this week as well? To Transformers collectors, Macross can often seem like a rainbow of different-coloured Jetfires with myriad variations, but of course it’s more complex than that. The highly simplified history of the toys being manufactured by Takatoku, and then eventually being released by Bandai when Takatoku went bust is also suitable enough for our purposes. The images above are of the VF-1S Battroid Valkyrie which was first released without the now-signature clip-on armour that Jetfire and later Valkyries are famous for. 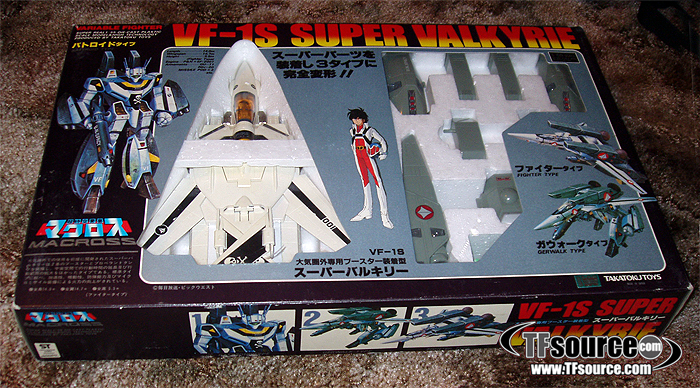 If I ever see this listed as "Diaclone Jetfire", I swear... 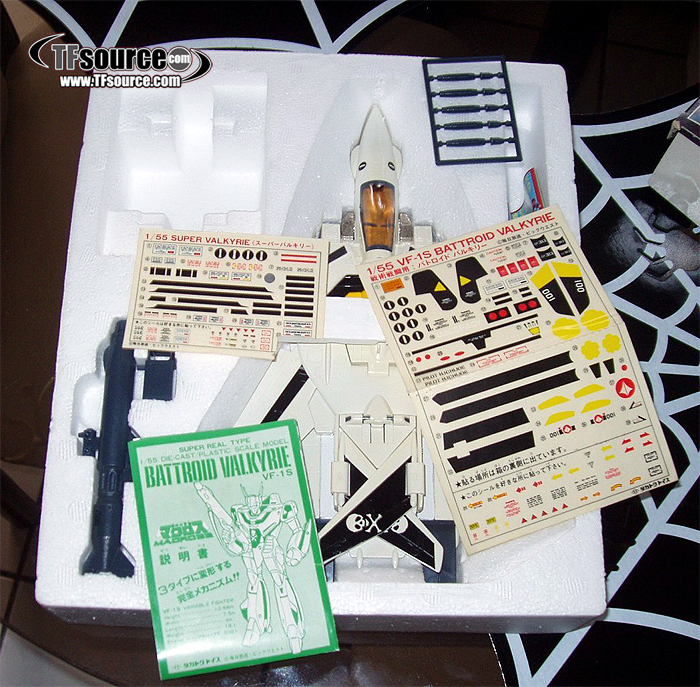 Those should keep you busy for a while 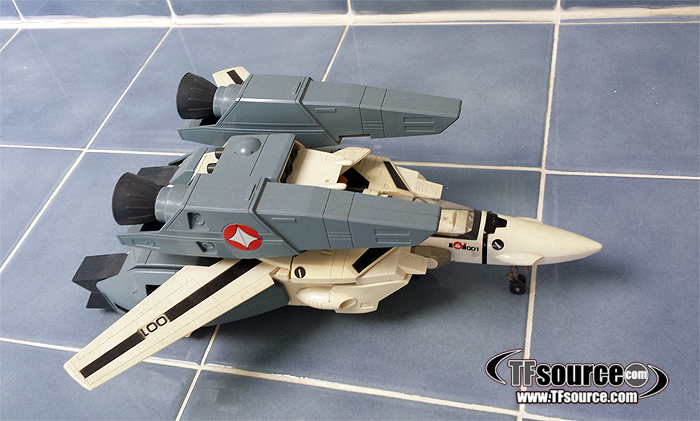 Looking at the later VF-1S Super Valkyrie release with armour, the similarities to Jetfire are evident all across the VF-1S, and on first viewing the lack of red on the Macross Valkyrie – and the yellow in its place – can seem incredibly strange, quite akin to the first time one sets eyes on Diaclone Car Robot variants of their Autobot heroes. The UN Spacy logo is emblazoned across the boosters, the same logo seen on the wings of the Matsushiro variant TF Jetfire. There are of course other Variable Fighter moulds; the VF-1A, VF-1J, the Elintseeker and Super Ostrich types, and while they are all based on the same jet, the robot heads, armour design and peripherals are different enough to give them unique character. Some of them are completely different colours, blue, brown or red jets even. A slippery slope for a Jetfire-lover, without a doubt. 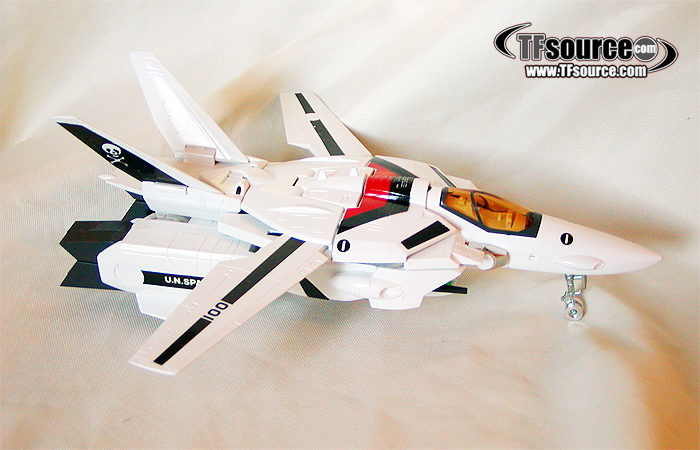 Getting closer to Jetfire 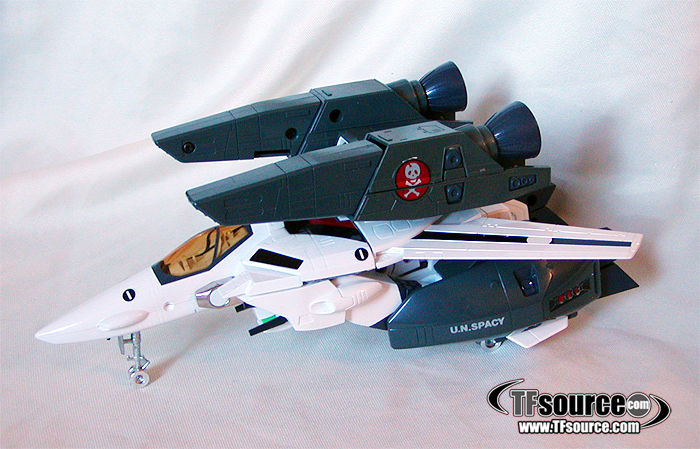 One of the boosters reveals a strike cannon 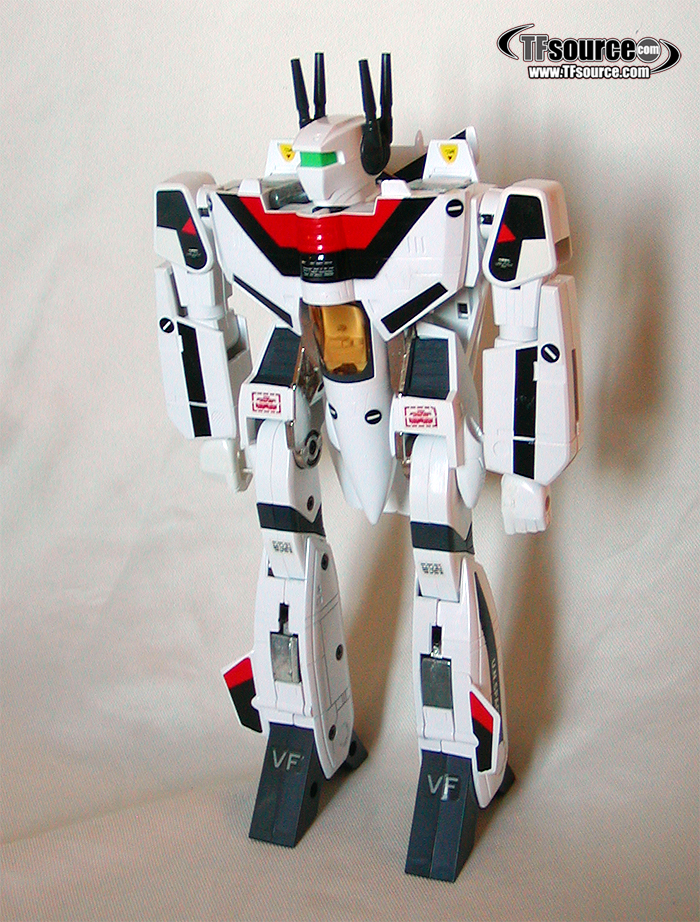 It seems, though, that the Jetfire colour scheme is closest to the VF-1S mould Strike Valkyrie from the “Do You Remember Love” Macross movie, and the rounded nosecone on the Transformers toy is borrowed from/shared with the Super Ostrich variant. So while the VF-1S Skull seems to be the most straight-up origin for Jetfire, there are other derivations in its eventual appearance. 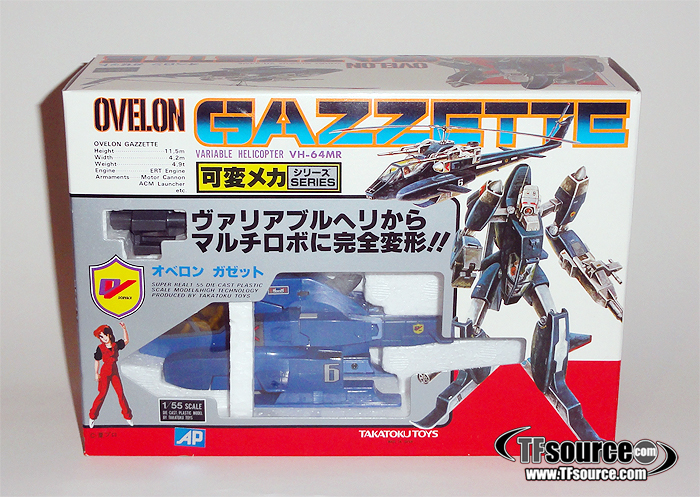 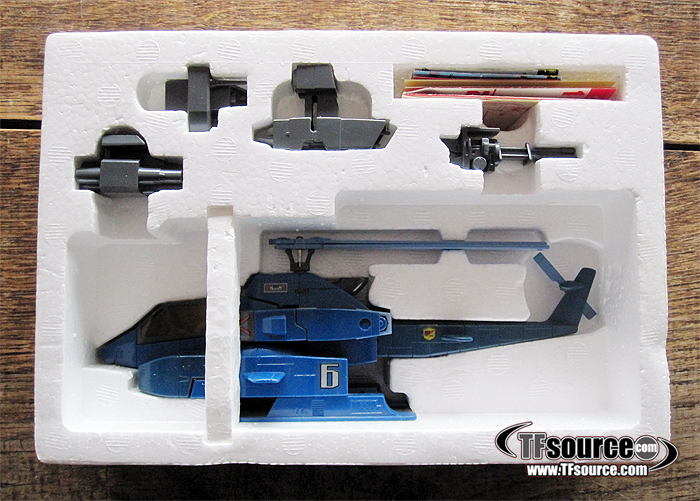 Last week we also touched on the origins of the G1 Autobot Deluxe Vehicle Whirl, and here is the original Special Armored Battalion Dorvack Ovelon Gazzette VH-64MR, by Takatoku Toys. Immediately we can see the unique artwork for the Gazzette, that he comes with a pilot, the typical and lovely Japanese styrofoam packaging and “AP” Ashi Productions animation studio sticker on the box front, just as Transformers Whirl had, the significance of which was discussed last time out. We can also see that like the Takatoku Macross Valkyries, this Ovelon Gazzette is made to a 1/55 scale. 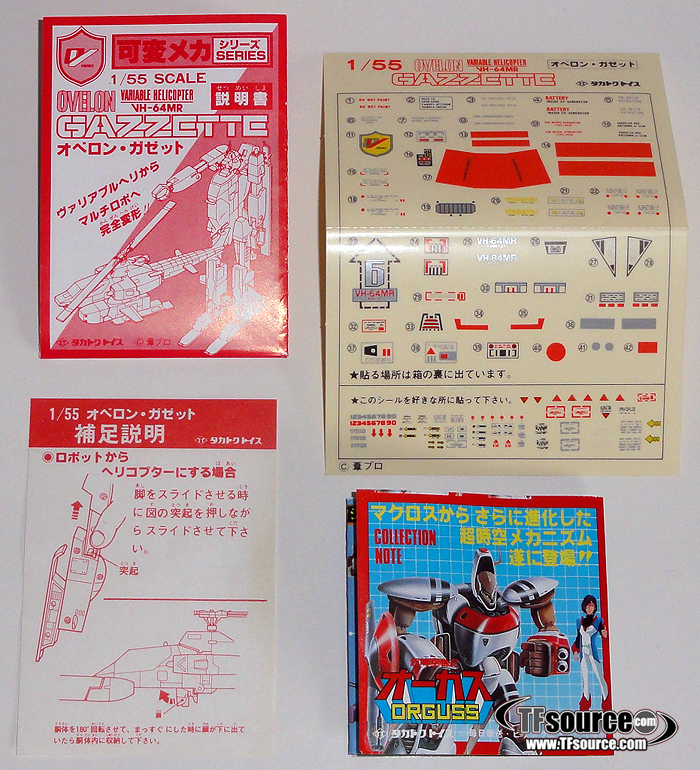 Back in the days of proper paperwork

All the Takatoku toys we are featuring tend to have similar paperwork, aesthetic and design. The stickersheet for the Gazzette is not completely unlike Valkyrie decals or Deluxe Insecticon decal sheets; many many labels, all very finely detailed and mostly on a clear background. We had the “VF” Variable Fighter Macross jets and now the “VH” Variable Helicopter Ovelon Gazzette, the terminology evidently being quite similar across the two Takatoku ranges as well. 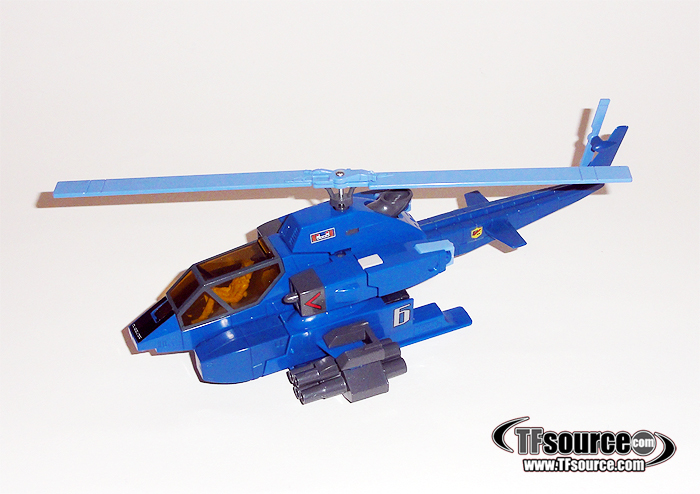 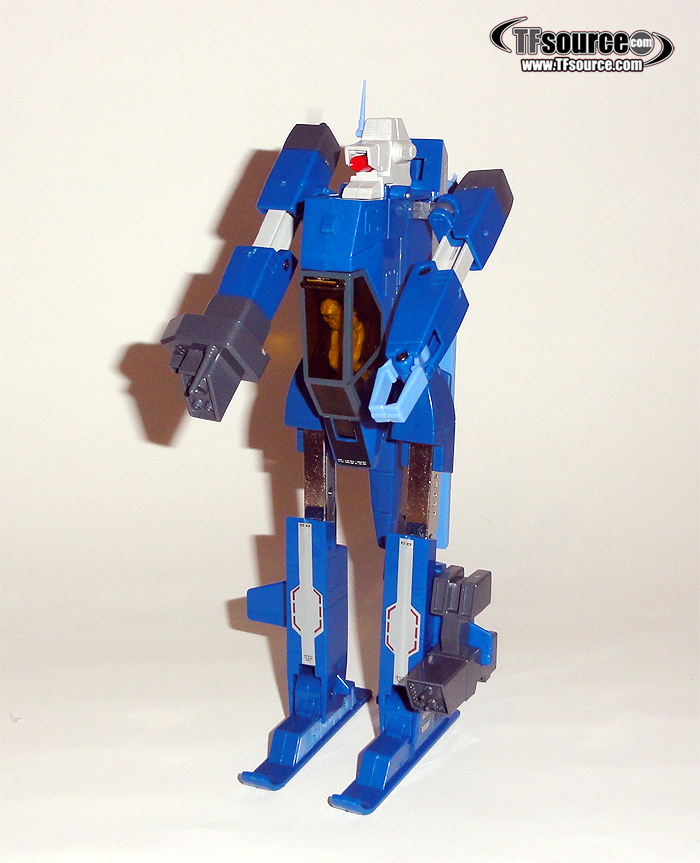 Robot mode a shade duller than its TF descendant?

Compared to Whirl, there’s a much more overall blue scheme to the Gazzette, the main parts of the figure being darker than Whirl, and even the blades and robot claws being blue. While the robot head and elbows look white, they are in fact a very light grey, along with just the red robot eye, dark grey shoulders, accessories and metal thighs they provide the only real break from blue. I prefer its helicopter mode to Whirl’s, but the Autobot has the nicer robot mode in my opinion. The pilot you can see inside the cockpit is “Louise Oberon”, hence the correct pronunciation of the toy being “Oberon Gazzette”, spelled “Ovelon” on the packaging. 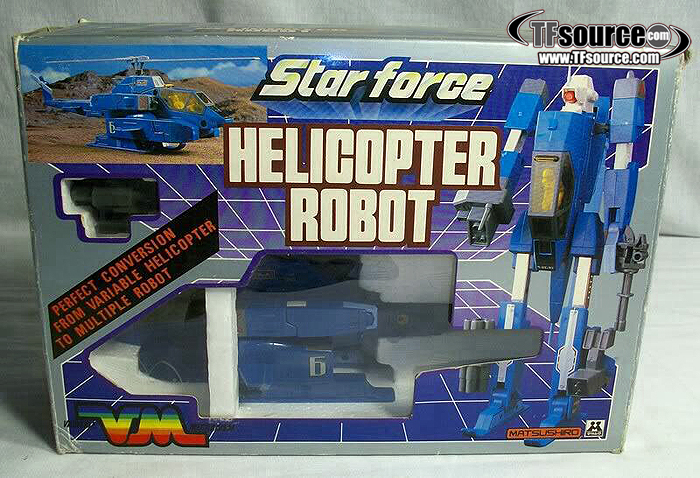 Can't believe it's not bootleg 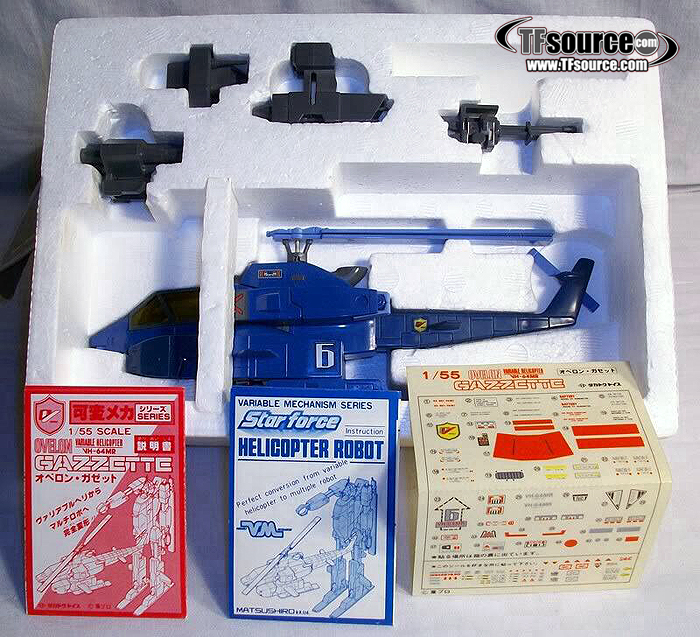 Interestingly, there is also an extremely rare English language version of the Ovelon Gazzette where it says “Matsushiro” on the box (who were known to be involved in the manufacture of Takatoku toys), so it is an official toy. Apparently this “Star Force Helicopter Robot” was produced for the European market (specifically the UK, although this one has a German price tag), and it is not to be confused with the vintage English language bootlegs of the Gazzette. No box art, a gloriously tacky box design and the stickersheet is the same as the Japanese Dorvack version, it seems to come with both Japanese and English instructions, and it has the same “Variable” terminology. Things like this are why I love this hobby. My absolute favourite part, though, is this… 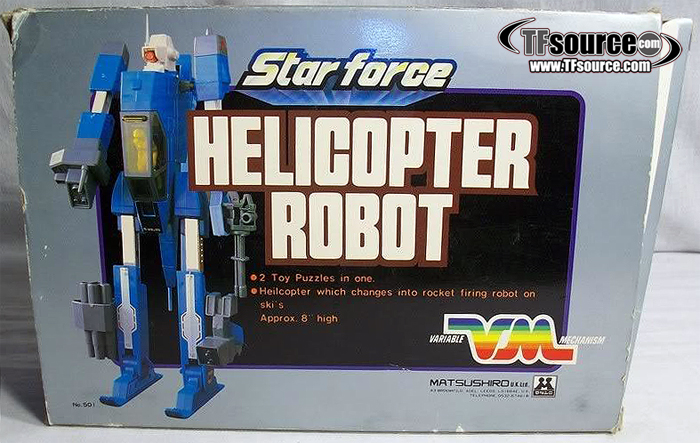 That is seriously SO Whirl

A Japanese company produce a very classic mecha-style aesthetic variable helicopter, even a dedicated animated series and story line and package it beautifully with glorious artwork, it’s so impressive that the toy gets picked up for Transformers. Now this same toy gets sent to Europe via Matsushiro and how do the local distributors market this lovingly-designed figure abroad? “Helicopter which changes into rocket firing robot on ski’s”! No, THAT is why I love this hobby. 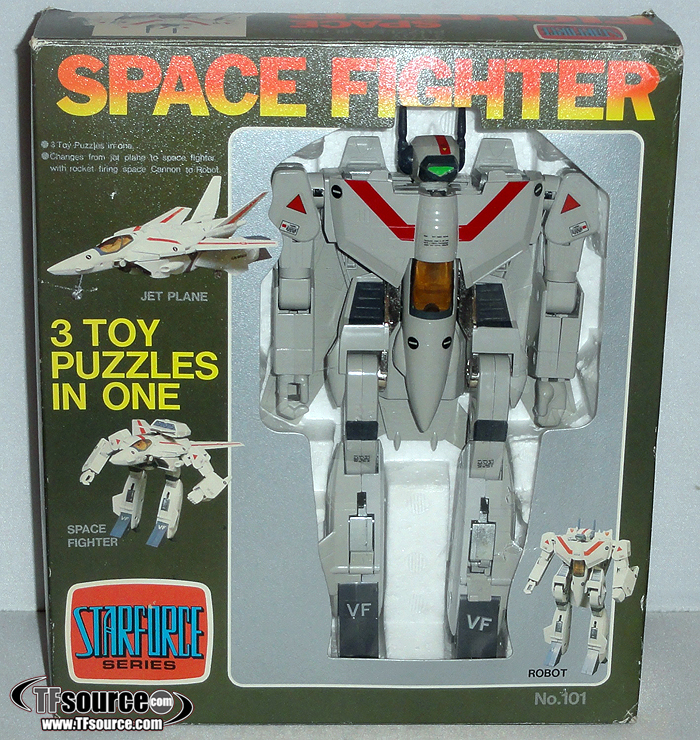 A number of Takatoku designs were released under “Starforce”, including a Macross VF-1J which happens to be “3 toy puzzles in one”, and links nicely to our pre-Jetfire theme at the start of the article. 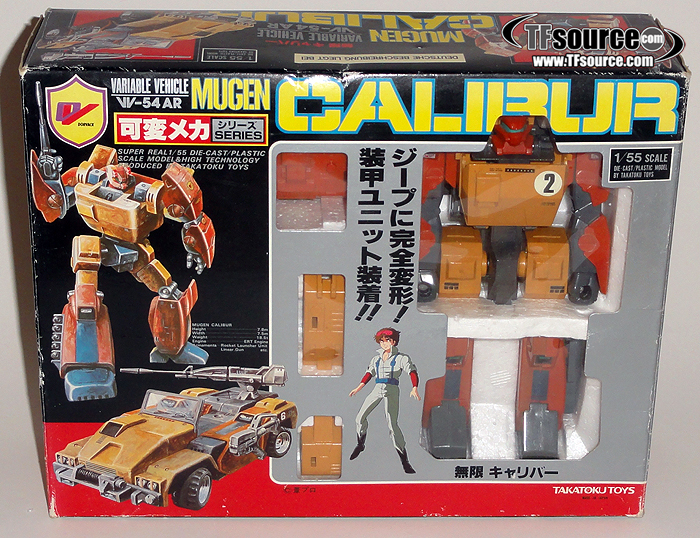 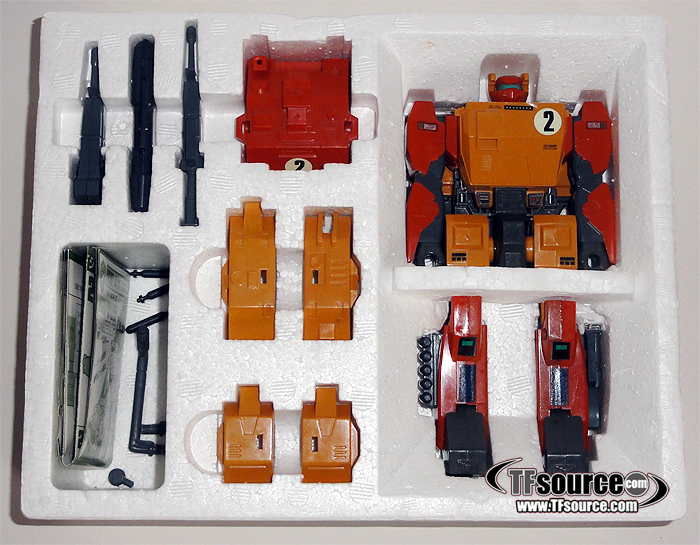 Onto the pre-Roadbuster, the Special Armored Battalion Dorvack Mugen Calibur VV-54 AR, VV standing for Variable Vehicle. Once again manufactured by Takatoku in 1/55 scale, one has to admire the uniformity of the Takatoku toy lines. The original king of snap-on armour and accessory extravaganza, The “Mugen” in “Mugen Calibur” comes from his pilot’s name being “Masato Mugen”. The Calibur has wonderful box artwork, and the robot pose is not completely unlike Transformers Roadbuster’s art, which is clearly derived from that pose. Styrofoam insert as per Japanese standard and similar paperwork to the Gazzette and other Takatoku offerings from the time. 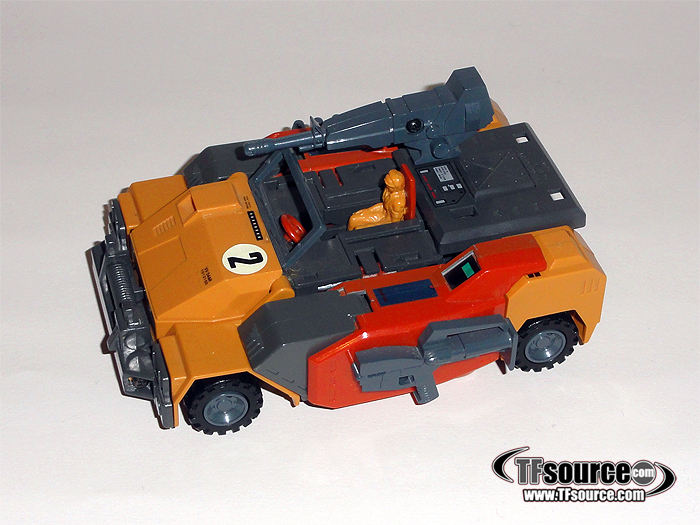 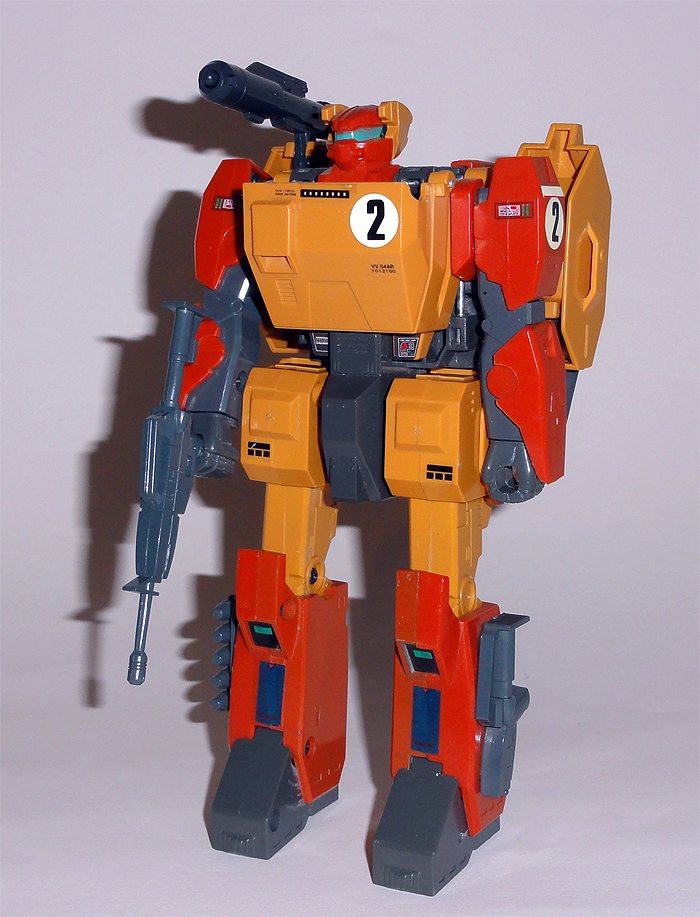 The colours are far more subdued on Mugen Calibur than on Transformers Roadbuster, which is hard to believe if you describe it literally as an orange and brown…vehicle. The mixing in of all the grey parts and the lack of jarring contrast have a lot to do with that. The significance of the “2” is lost on me sadly, I can only guess it might be his designation in the 3-toy Dorvack line. Interesting that he has a blue eye bar, which is very Autobot. Despite my implying that the colours on Roadbuster are jarring, I prefer the scheme on the Transformers version to the Calibur because it affords him more character, but then the Mugen Calibur isn’t sentient, he is piloted mecha, so his scheme does make more sense in that context. 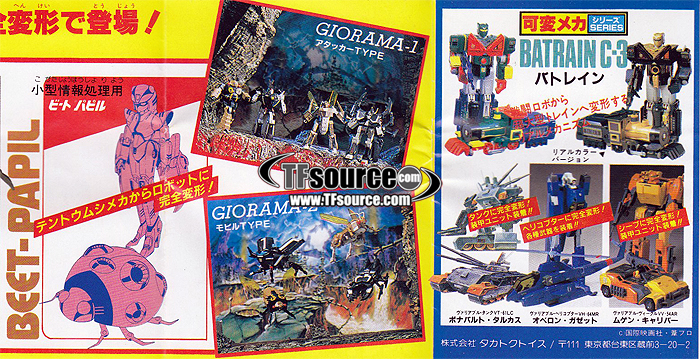 Arcee as an Insecticon

Looking at the paperwork above, you can see the third Dorvack vehicle, the Bonaparte Tulcas tank which obviously never made it to Transformers, but it does make you wonder if Hasbro came close to licensing it. If you’ve ever seen the Tulcas “robot” mode, you’ll be left in no doubt as to why Hasbro only selected the Ovelon Gazzette and Mugen Calibur for their flagship robot toy line.

On the subject of things not making it to Transformers, we saw last week that not all 4 Deluxe Insecticons had pre-Transformers versions officially released, the pre-Ransack having not made it to full final Beetras production through Takatoku. Above you can also see the silhouette for the fifth Beetras mould, the female ladybird “Beet Papil” which never made it past the prototype phase, although there have been bootlegs based on the mould that never was, and that’s where we’ll pick up our non-Takara Pre-Transformers story again next week! For now though, we’ve just had a peek into how rich the pre-Transformers heritage of these toys really are. 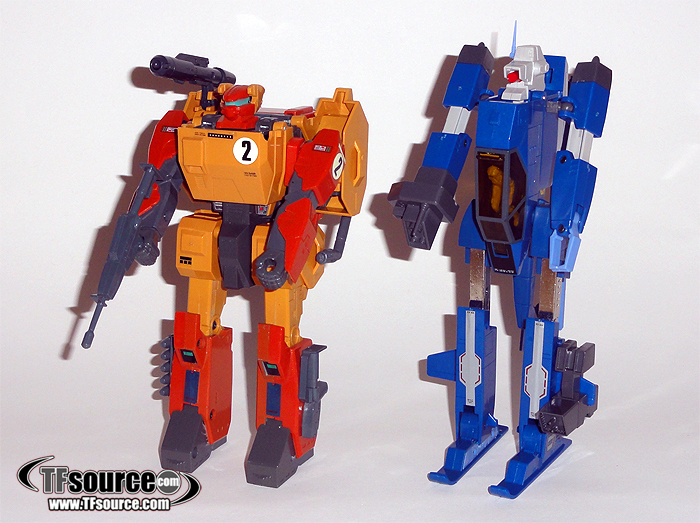 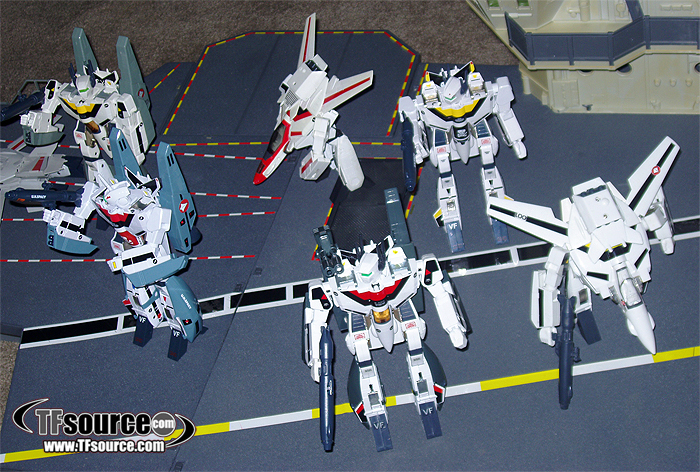 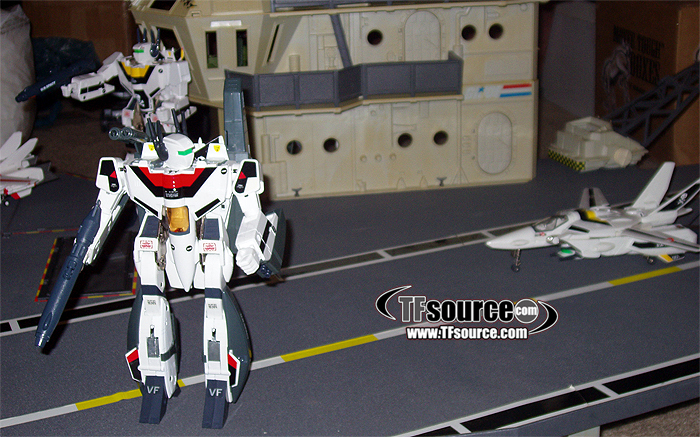 Many kind thanks to Colin Pringle, Jeremy Kaufmann, Jim Sorenson, Mike Northern and Curt from TFSource for their photographic contributions, and to Jeremy Kaufmann again for continuing his valuable supply of information and corrections!