Are We Ready For A Return To ‘Beast-formers?’

If you follow any of the major Transformers news sites, such as TFW2005, you’ve probably come across the recently revealed renders for Transformers: Age Of Extinction; not to mention the continuing swarm of movie news. Your reaction to the Optimus Prime, Bumblebee, and Grimlock renders probably will have varied depending on how well liked the live action movies are in your own opinion… 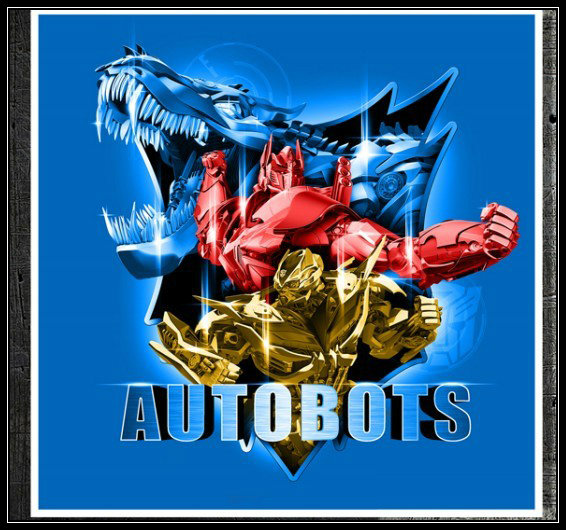 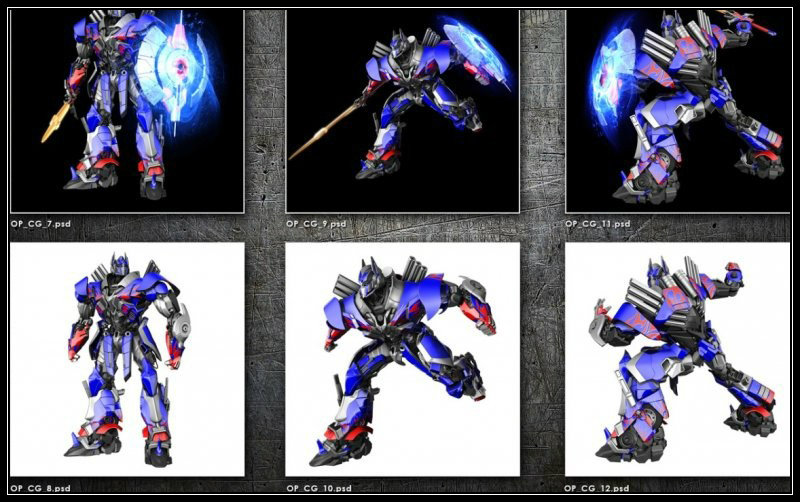 I was excited by the above new reveals (samurai looking Optimus Prime – why not?), but I also felt exhausted by them, “burned out” from being exposed to the “Bay” Style of Transformers for over seven years now. Is it time for something more fresh?

Now before you jump to conclusions, no, this article is not going to be a Bay bashing, “you ruined my childhood” type of article. I absolutely have loved the live action movies and everything they’ve brought to our hobby, while still anxiously waiting for Transformers 4: Age of Extinction. However, I want to ask a question to all Transformers fans and collectors in light of the recent swarm of TF4 news. 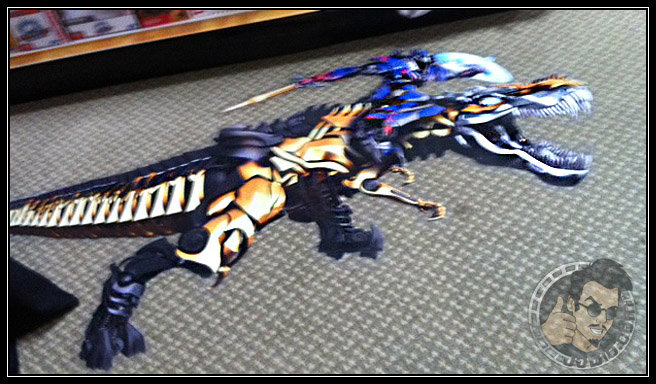 Anyone else hoping this is much more than just a toy display? Image taken from original TFW2005 report.

Sparked also by recent discussion I’ve had with several local Transformers collector friends of mine, I wonder if Transformers is in need of something new, something fresh to break up the all too normal influence of movie style aesthetics and themes. For over seven years we’ve seen the live action movies forcefully influence nearly everything about our hobby, for the overall better whether you want to admit it or not. We’ve seen it in our toys, TV shows, heck even BotCon itself has been influenced by the movies (two words: Pasadena, California).

Is it time for something different, though? Can Transformers fans handle a change? I ask these questions because I think it might just be time again: are we ready for a return to ‘Beast-formers?’ 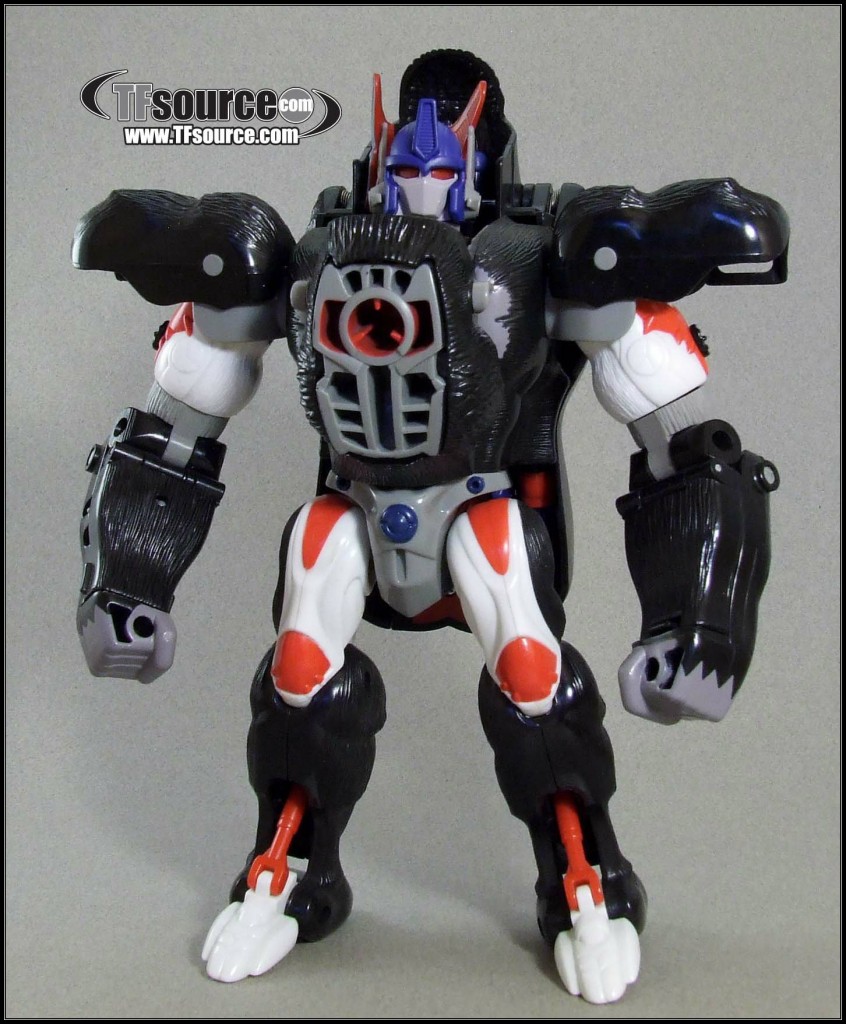 When we think ‘Beast-formers’ the predominant imagery that comes to mind are from the cartoon series and toy line: Beast Wars. Characters such as Optimus Primal, Cheetor, Waspinator, and Megatron (the purple T-Rex) arguably helped save the Transformers franchise from the pits when it was at its lowest point in the early 1990’s; maybe it was the sole reason Transformers did not go the same route as Go-Bots. 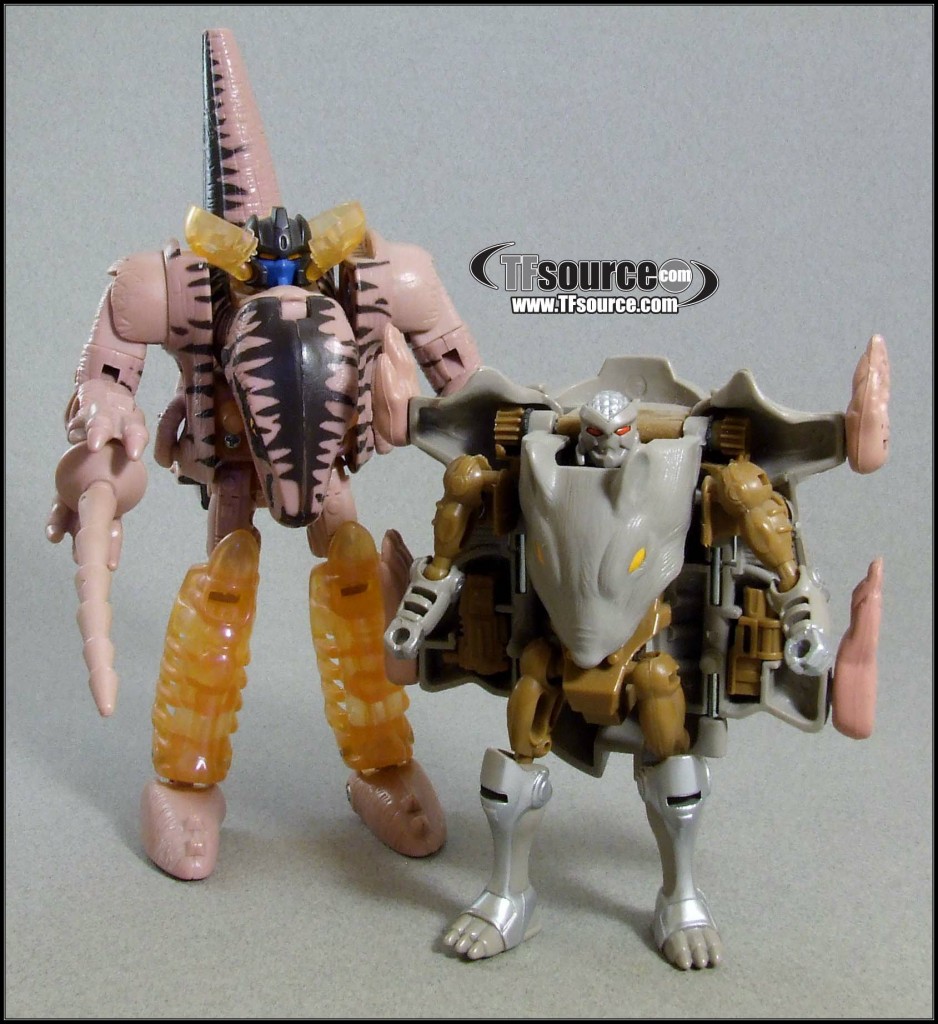 Two of the absolute best characters in Transformers history.

At the current time when Transforms is without question the biggest it’s ever been with the boom of Masterpiece figures, 3rd Party offerings, and yet another live action movie coming in 2014, one also has to take notice of the potential of a stalling point with the current trend of Transformers. In other words, has the current “face” of Transformers peaked and are we seeing the decline of the movie era/Transformers as we’ve known it to be for the past seven years?

Undoubtedly I believe the answer is yes even when things are still going strong and still darn good. That’s not a bad thing mind you, it’s just a signal for change perhaps. 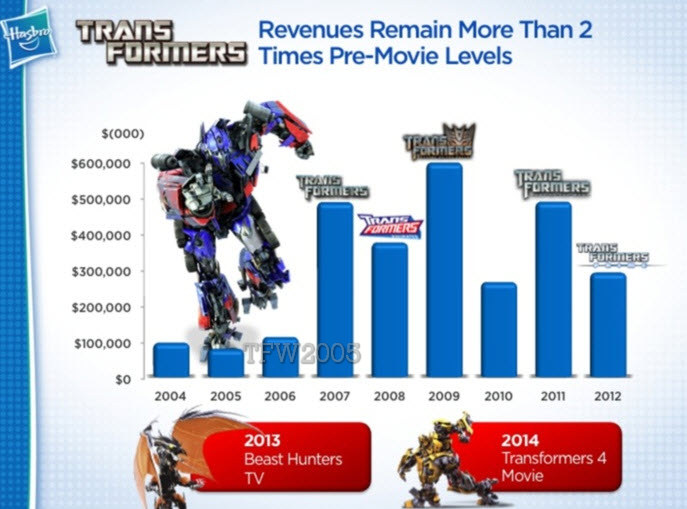 Toy sales peaked during the live action craze … but we’re seeing a decline.

It goes without question the Movie era is the biggest time revenue wise and has opened the door to all new possibilities (Masterpiece figures, Generations figures, video games, comics, etc.). All great things come to an end though … or maybe we just get bored of them. Either way, the future of live action movies beyond Transformers 4: AOE is up in the air. That’s saying a lot considering how much influence the movies have been in nearly everything Transformers. 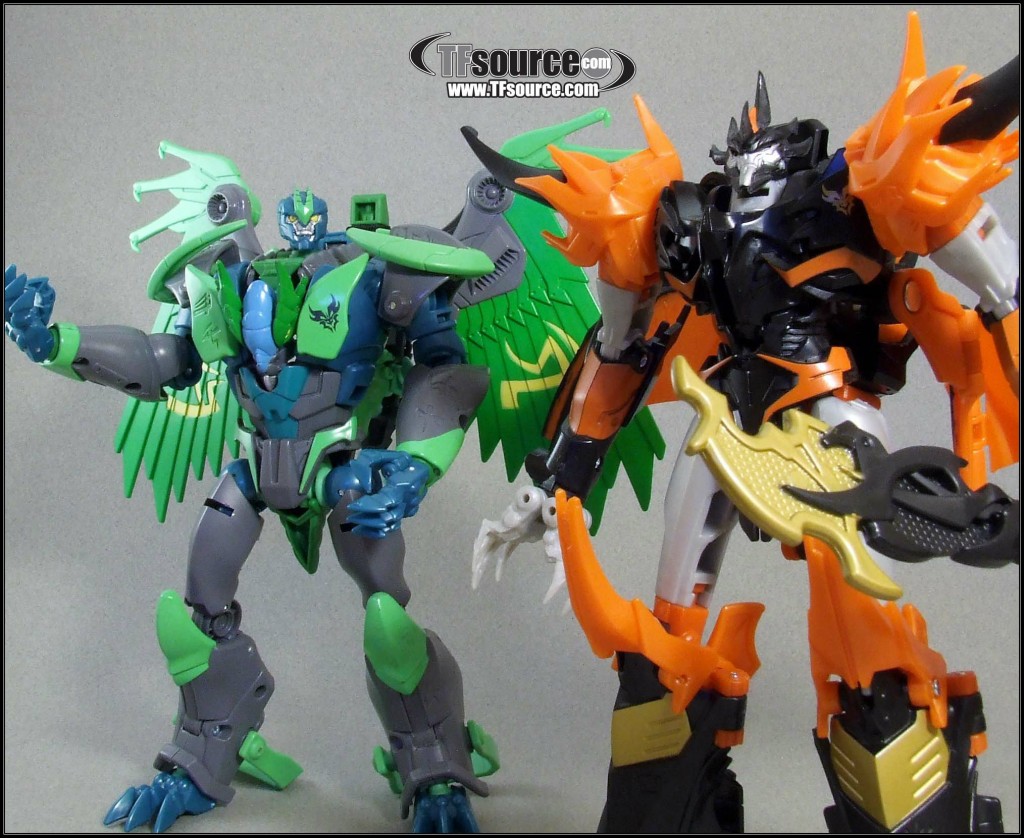 Testing the waters for more beast-formers?

Most fans should know by now how “Transformers Prime” played out, both as a continuing toy line and TV show: it was received fairly well among fans, had its ups and downs between three TV seasons and a “movie,” had some terrific figures along with its epic flops (looking at you Airachnid), but it wasn’t ground breaking by any means. The important thing to take note of is the inclusion of beasts into key parts of the toy line and TV show. Beasts were the reinvention part of this Transformers genre. Sound familiar, kind of like what Beast Wars did? 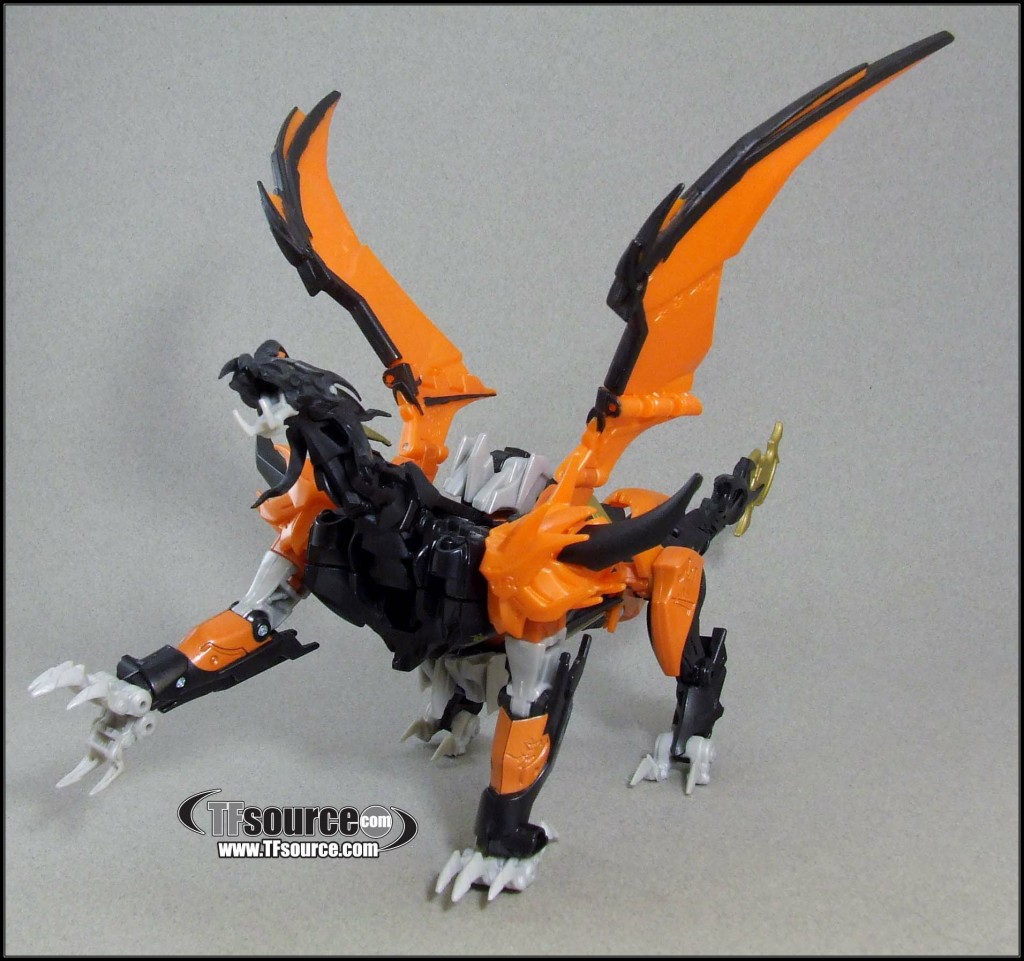 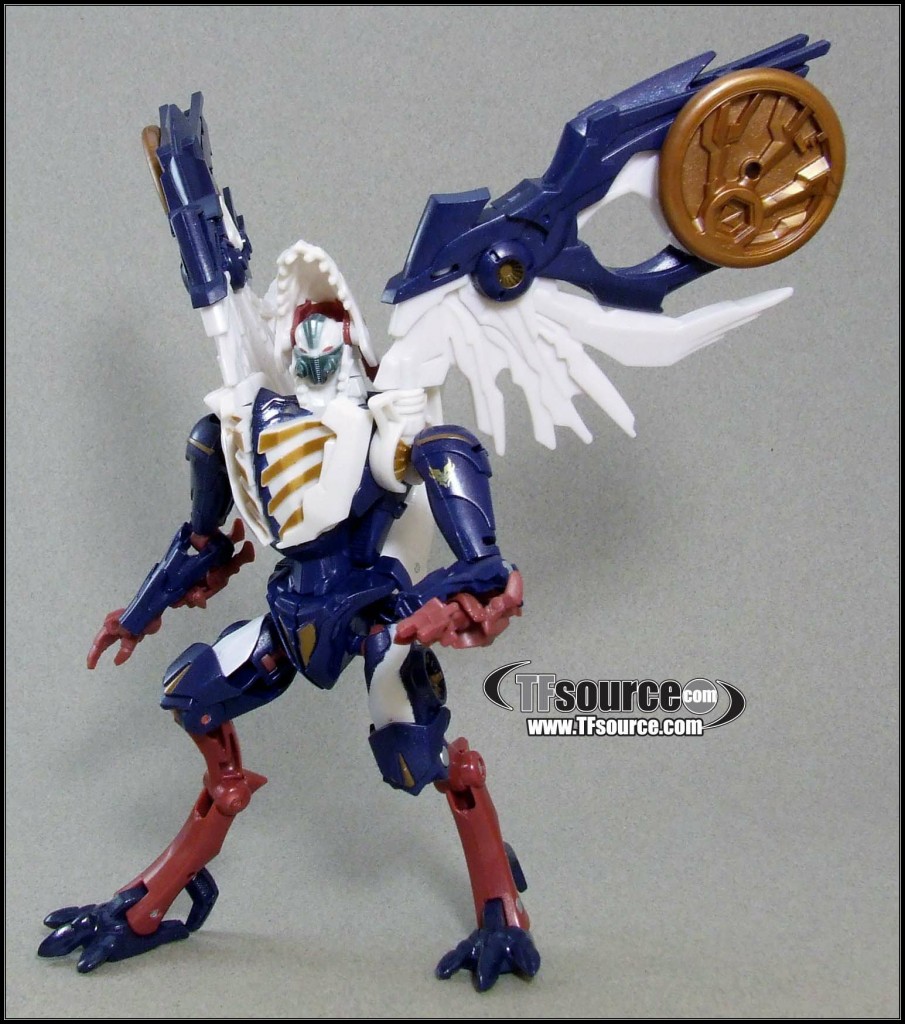 During the Transformers Prime series, specifically the Beast Hunters portion, we saw characters such as Predaking, Sky-Lynx, Darksteel, the Insecticons, and many more toy only characters still being released. Was this inclusion of several Predacons on toy shelves and TV screens a way to test the waters of bringing beast-formers back to the main spotlight of Transformers? Were Beast Hunters the reinvention Transformers needed to break up the common trend of “movie styled” characters?

Obviously the Predacons were not the sole focus of the TV show and toy line, but the leader of all Predacons, Predaking, received one of the biggest pushes toward the spotlight we normally would see reserved for Megatron, Optimus Prime, and Bumblebee. How intentional was this? Given how “average” the show and toy line were, did beast-formers help or hurt the “Prime” era? 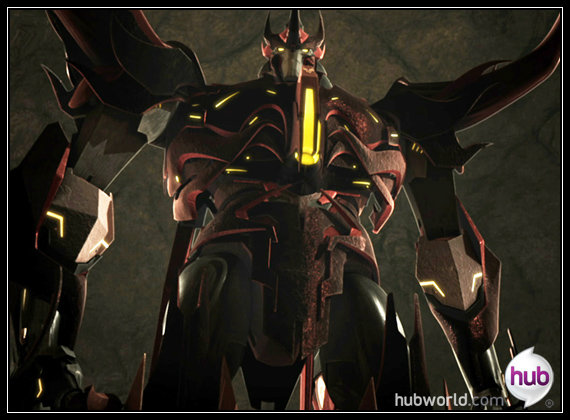 Predaking as we know him from Transformers Prime: Beast Hunters – Image courtesy of the HubWorld website

We’re also seeing both Hasbro/Takara and the official Transformers Collector’s Club throw some love towards the fans of beast-formers. To much applause, Hasbro will be releasing a Generations/Classics version of Waspinator and Rhinox (due out now actually). Is this based on popular demand or is Hasbro just turning out figures from all Generations, seeing how we have an Armada Starscream coming as well? 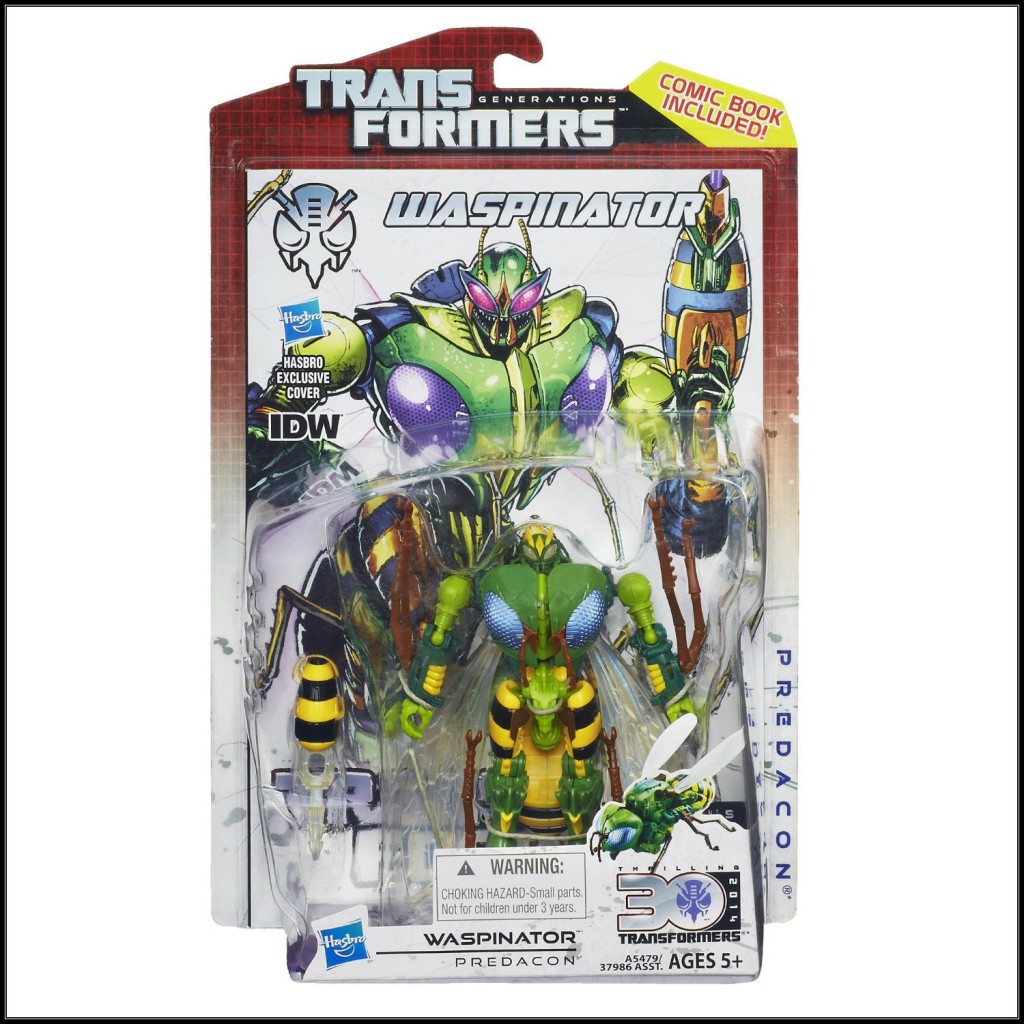 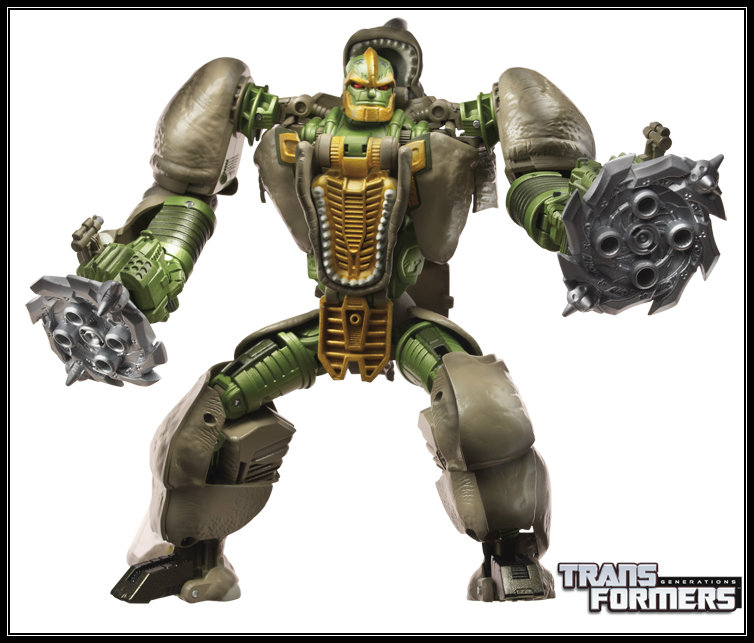 The TFCC with their Subscription Service will also give Collectors the chance to own Ultra Mammoth, a Beast Wars Neo redeco of a very popular Beast Wars toy in the first year of the service. In the second year we’ll also get Thrustinator, another Beast Wars toy from a mold that was never released in North America.

Sure, both Hasbro’s releases and the Subscription Service hits home with more eras of Transformers, but Ultra Mammoth and Thrustinator have been generally well received by fans. Hasbro’s Rhinox and Waspinator as already mentioned were almost unanimously praised across Transformers forums. How long will we wait until we see another beast-formers type BotCon set? More Hasbro Generations releases? 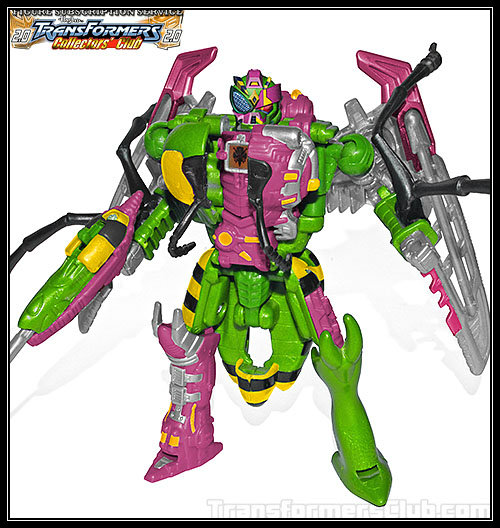 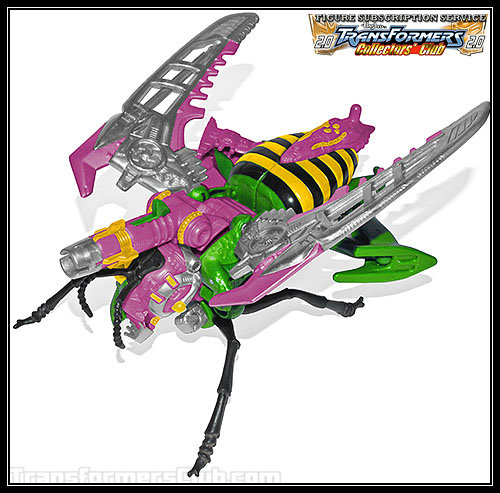 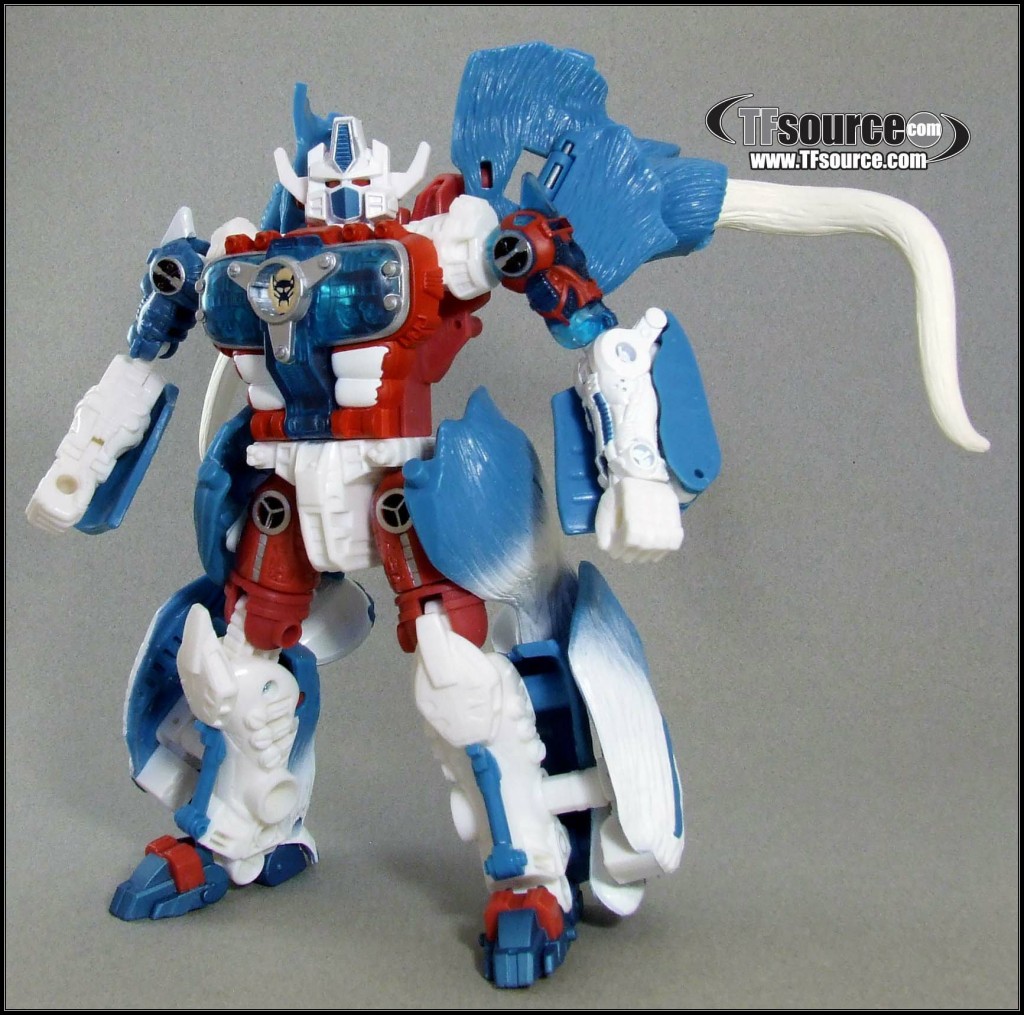 And of course, let’s also not forget the hottest talked about Transformers item we’ll have for the next year: Transformers 4 – Age of Extinction . We’ll need to put up with those same movie aesthetics, the swarm of Bumblebees that are bound to hit toy shelves, and even questions surrounding the longevity of this era, but there’s also something new being included into the film, something other than a metal alt form with wheels. The most famous beasts of them all: Grimlock and his Dinobot crew. Should we be surprised there’s another popular beast-former being thrust in the spotlight? 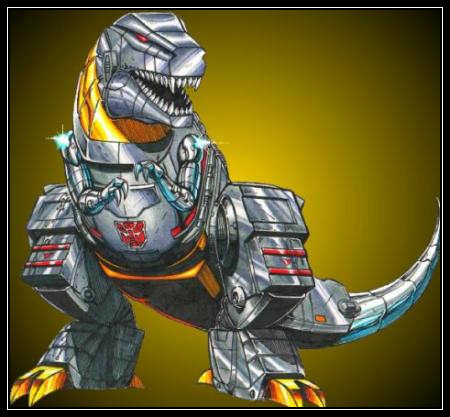 Grimlock, I really have no idea what Michael Bay plans to do to you.

I know the argument will come up so I’ll address it now, Grimlock and his fellow Dinobots are not organic style Transformers like Waspinator or Ultra Mammoth are, but they are still beasts; a robotic Transformer with ties to beast life (no wheels on these guys). Not only are the Dinobots beast-formers, but they’re easily the most popular of all. And hold on to your chairs guys: the Dinobots will probably be getting toys (potential spoilers for TF4)! Not a bad way to test the waters for a possible return of beast style Transformers, right? Wrong? 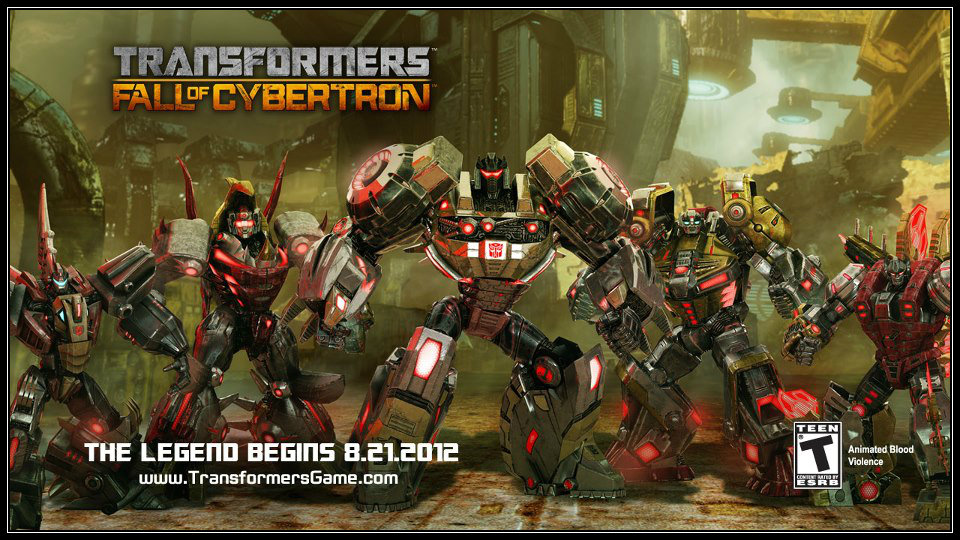 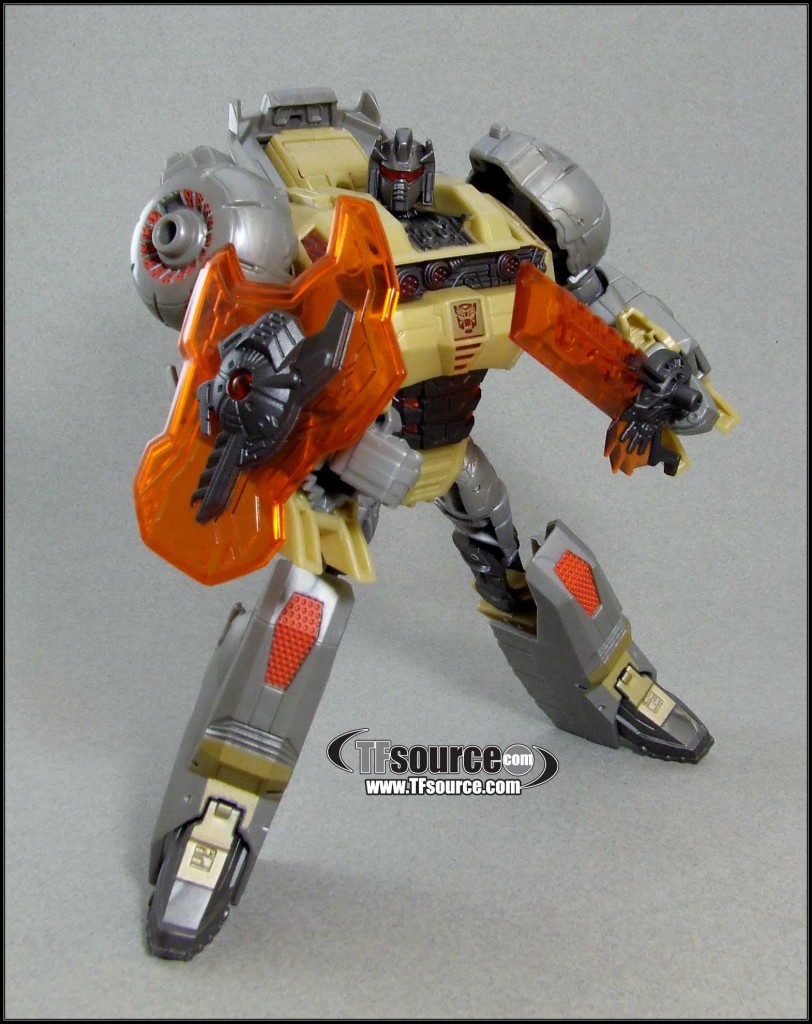 Will the “Bayverse” Dinobots look something like Fall Of Cybertron’s representations?

The last point I want to bring up is the timing of all this and it sits close with me. Beast-formers although always a part of Transformers since the days of Generation 1 (Dinobots, Insecticons, Predacons, etc.) predominately started in 1996 with “Beast Wars.” This was when Transformers saw a complete abandonment of vehicular alt modes in favor of organic beast forms, and later alternate beast modes with rockets, wheels, and other cool stuff (like jet propelled snowboard things). 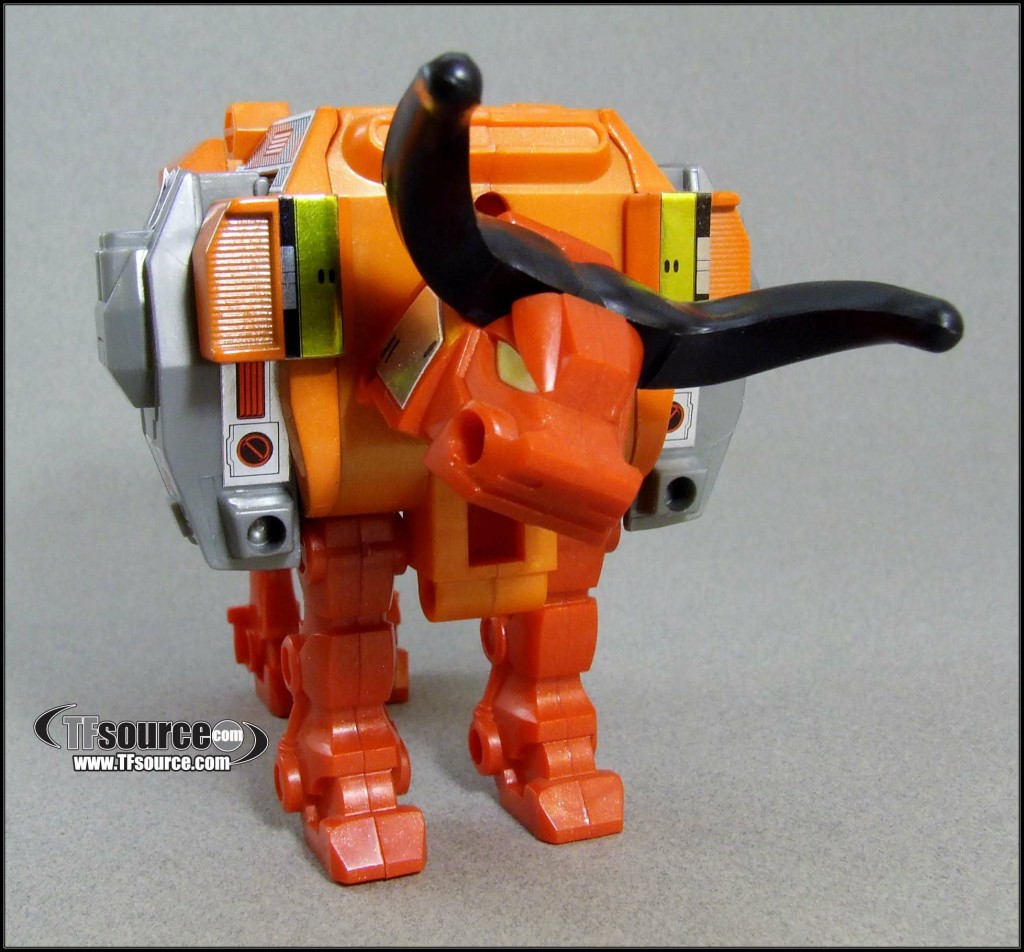 I’m 24 years old and making more money than I ever have before (which still is not a lot unfortunately), but I do have the means to buy some figures here and there, something not possible a mere five years ago. Most 20 something fans grew up with Beast Wars and now are getting that nostalgia bug; that all powerful virus that makes us want to re-buy or finally buy the toys from our childhood. In other words, the “Beast Wars” era of collectors are looking for toys and media to fulfill their nostalgia needs. Will Hasbro and Takara capitalize on this potential like the “Classics” line did for G1 fans? Is the time now for that potential? 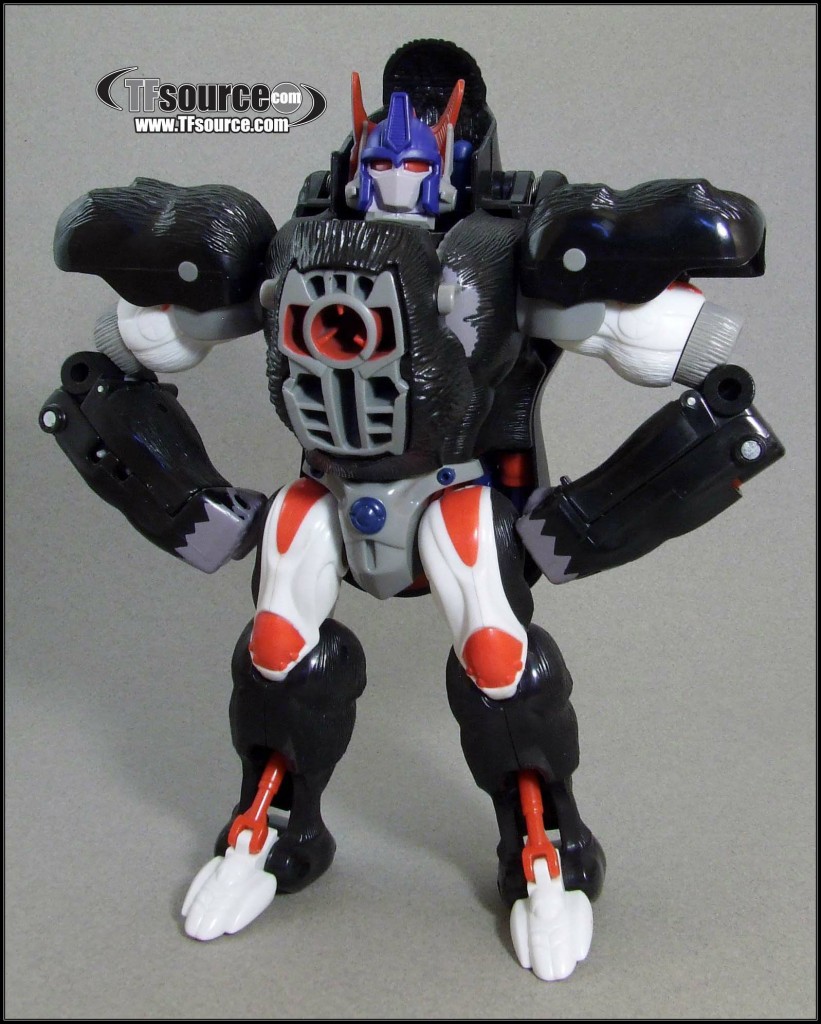 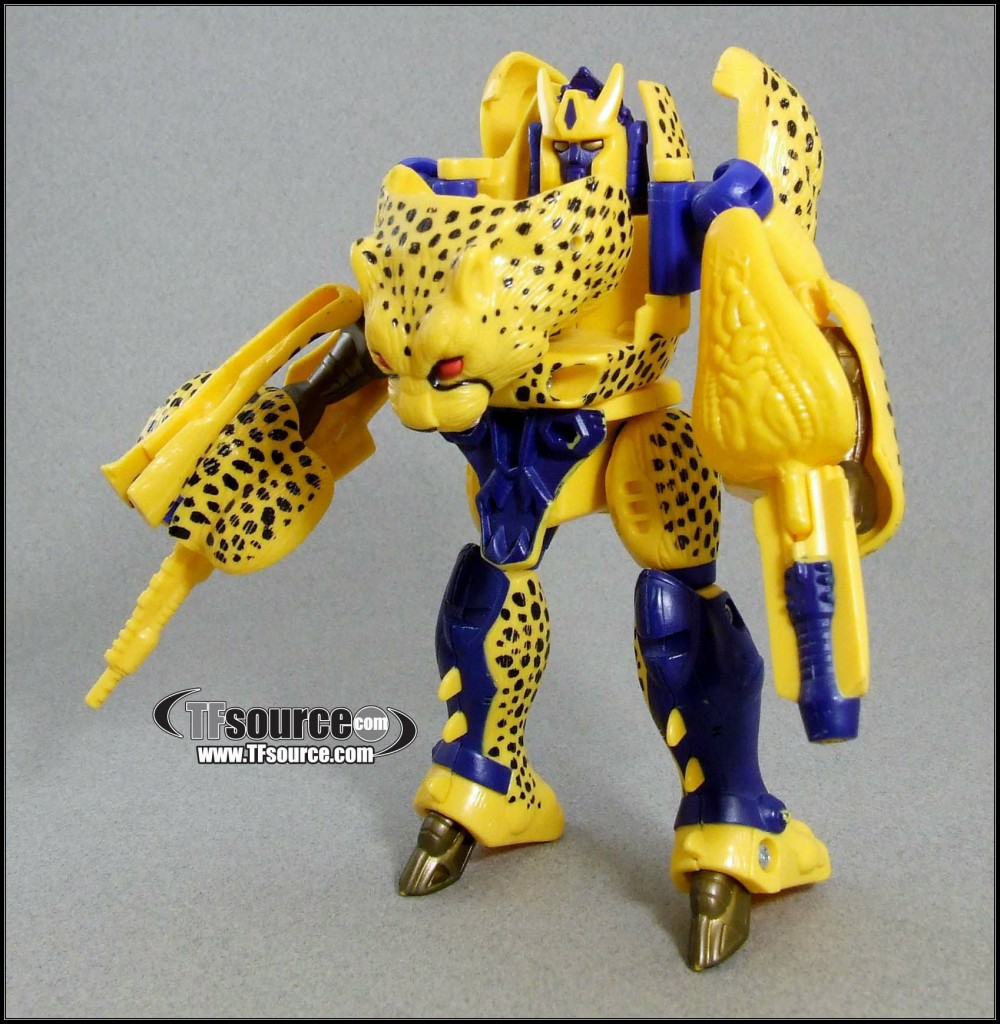 A part of me believes what we saw with Beast Wars will never happen again; it was so unique and came at such a desperate time of Transformers that beast-formers may not cut it today. I do believe however, fans could welcome a full on return to a show and toy line similar to Beast Wars, but the more realistic scenario would simply keep beast like characters as “main event” players in our comic books, TV shows, and toy lines like we’re seeing now to “reinvent” the brand and freshen things up: Beast Hunters, Age of Extinction, toy releases from TFCC and Hasbro, and heck, even potential future opportunities for a Masterpiece beast-former figure.

What do you think; are Transformers fans ready for a return to beast-formers?

Huge thanks to NIBMRatchet and the rest of the TFW2005 staff for their awesome coverage of all things movie related to assist my research, and my local collecting friends that always seem to spark the perfect conversations.

Thanks for reading all.

Are We Ready For A Return To ‘Beast-formers?’