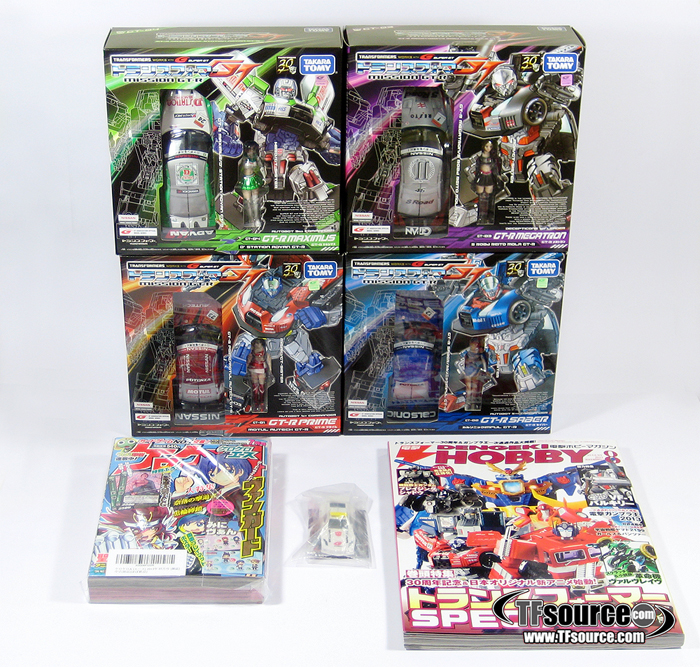 As quietly as it came, TakaraTomy’s Transformers GT toy-line has seemingly given us its last offering and wrapped up with as little fanfare as when it launched. That’s not for a lack of trying on TakaraTomy’s behalf though, this gorgeous short-lived series has suffered primarily from being perceived as nothing more than expensive repaints of existing Alternity moulds and trying to wrestle fans’ attention away from the immensely exciting Masterpiece and 3rd Party scene currently grabbing all the headlines. Well, it got my attention, and with the series now complete, It deserves its moment in the spotlight. Again!

Late September 2013 saw the release of GT-04 Maximus, the fourth and final primary member of the Transformers GT series of toys. A series that saw TakaraTomy and Nissan showcase the glorious SuperGT touring cars so popular in Japan as Transformers, specifically based on the Nissan R35 GT-R Transformers Alternity mould from a few years ago, but re-tooled to resemble the Super GT silhouette racers. GT-R Maximus joins 01 Prime, 02 Saber and 03 Megatron, as well as the very limited race-day giveaway Legends-class “Safety Prime” figure. Our previous articles on TFGT can be found here, here and here. With no further releases on the horizon, we finally get to put all the Transformers GT items together and see the (little) big picture. 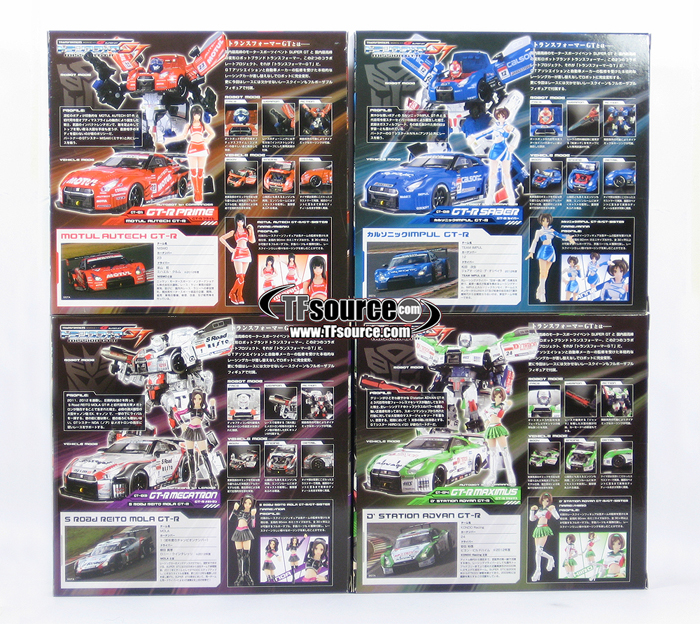 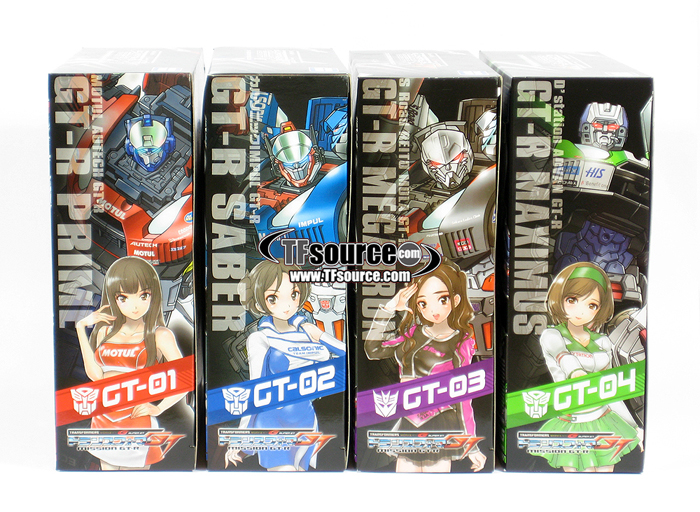 Just another example of the effort TT have put in

While the IDW Transformers comic continuity has helped me get used to the idea that Fortress Maximus doesn’t have to be city-sized, I still expected to find GT Maximus the most unusual of the 4 Transformers GT characters released using the GT-R template. Once the figure was in-hand, all such concerns evaporated as TakaraTomy have – somehow – managed to incorporate the majesty of the great Fort Max into a relatively tiny racing car. 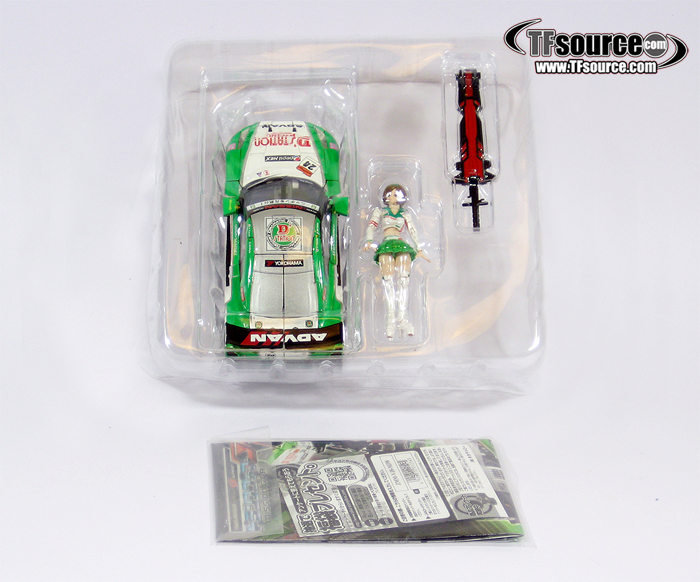 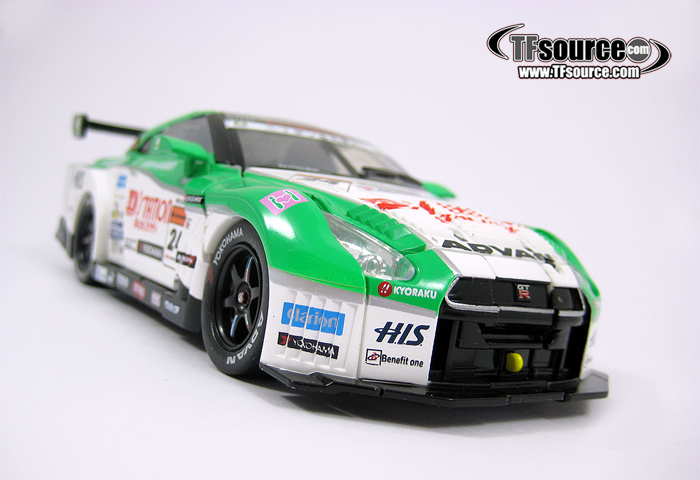 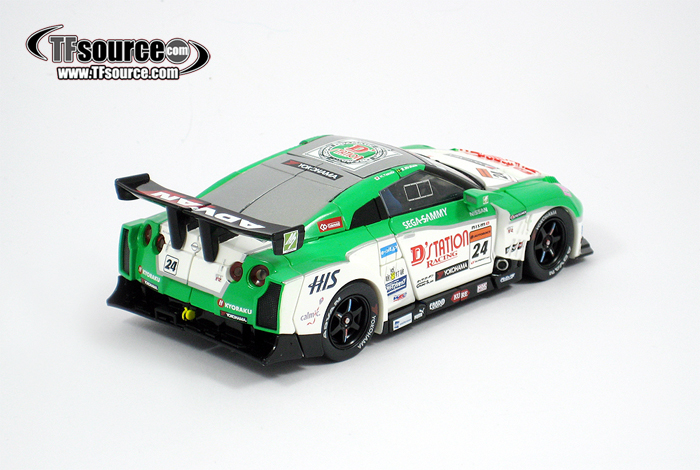 Fort Max as a Nissan

GT Maximus is based on Kondo Racing’s D’Station Advan-sponsored GT500 entry, this very striking green and white livery stands out considerably from the cars already in this series. One imagines it’s also very easy to spot the real Kondo #24 GT-R on a track! Maximus is covered in sponsors’ logos in vehicle mode as has become par for the course with Transformers GT, recreating the look of the real racing vehicle down to the tiniest detail, if we forget for a moment that the TFGT toys use the road car frame instead of the bespoke racing silhouette. 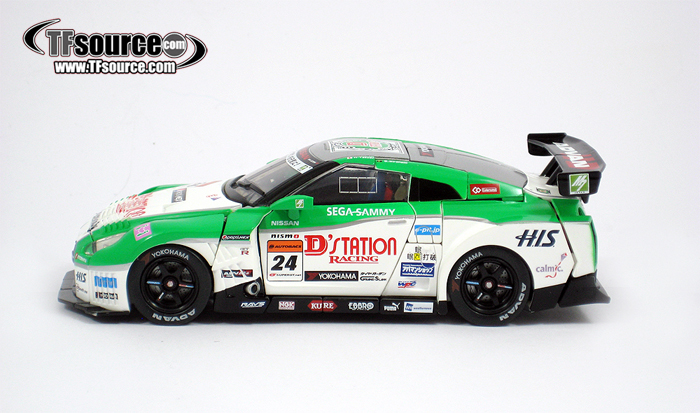 Stunning from every angle 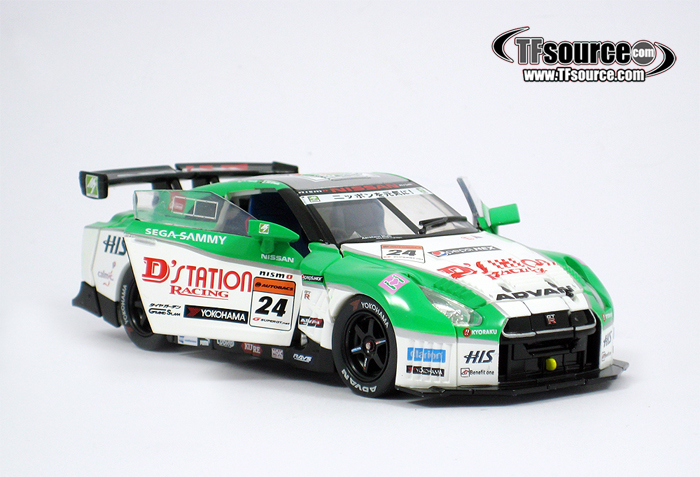 Can MP Lambor open its doors? 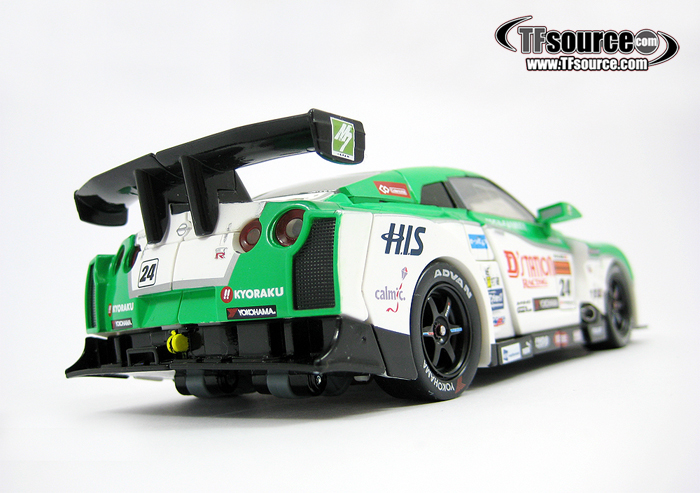 Attention to detail is exemplary

The detail in the paint application and the presentation of these Transformers GT toys trumps that of Masterpiece figures, I’m sure that will offend the hardliners, but it’s as clear as day to me. Let’s also not forget that they are the same size as the Masterpiece cars but with die cast content and rubber tyres. That doesn’t mean they are above having quality control issues, far from it – it seems no product at all can escape that these days. As a racing follower, as a GT racing enthusiast and a long time fan of Super GT machinery, I feel I can appreciate these for being much more than just the same mould milked four more times and laughably called a “toy line”. 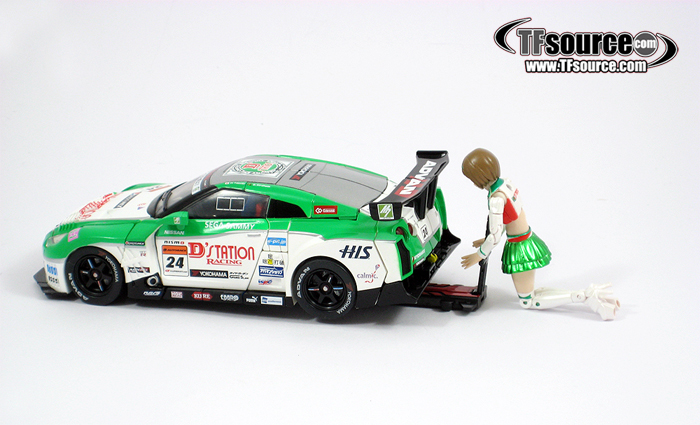 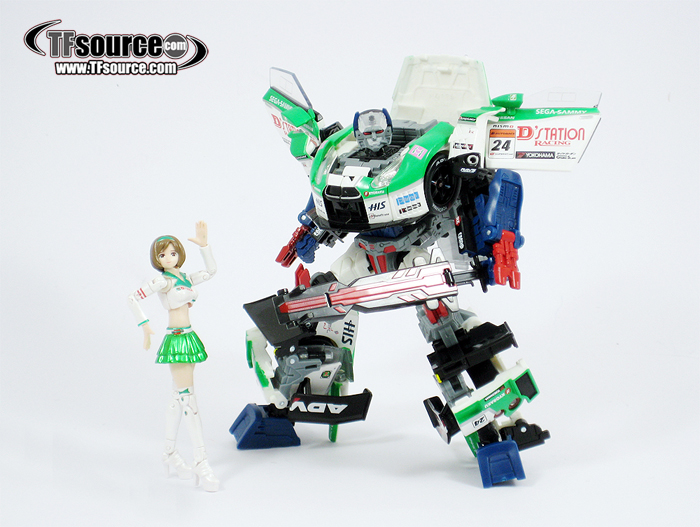 Maximus, like the other GT releases, is accompanied by a Microman-style poseable human figure GT Sister called “Hiiro”. Of all the GT Sisters released so far, maybe because of the type of boots they’ve given her, I find Hiiro the absolute hardest to pose and stand. There’s a shot later with all 4 Sisters that took me damn near one hour to set up thanks to their inherent instability. Maximus also has a very cool accessory, his Master Sword which doubles up as a jack, and is therefore called his “Master Jack Sword”. I’m still amazed at just how much of the essence of G1 Fortress Maximus the designers were able to embed into a predominantly green and white Nissan racing car. 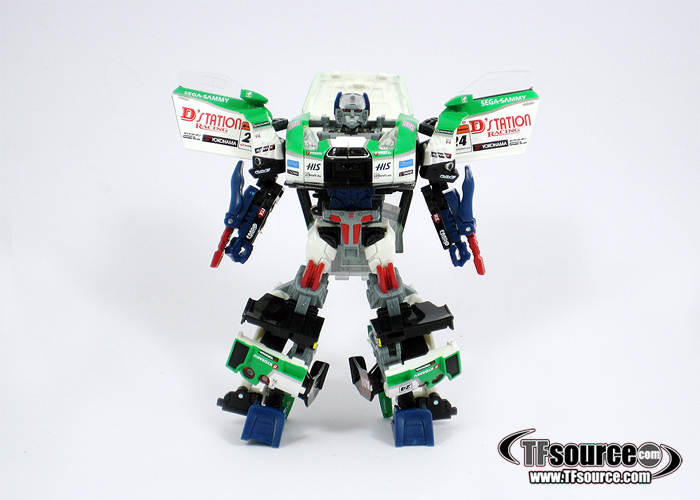 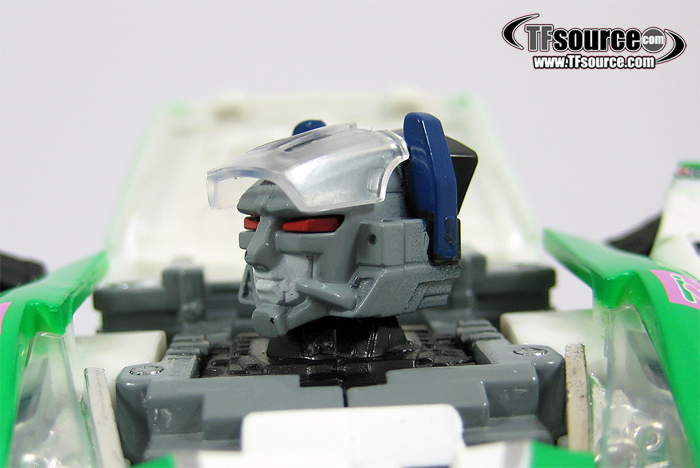 Nice touches all round

That shade of blue and grey used with red highlights on the knees, feet, crotch, hands and head give it the unmistakable Maximus feel.  The double-barreled cannons on the back of the arms make more sense on Maximus than any of the previous TFGT characters, and that head-sculpt is just spot on. However, mine comes with a few paint chips, and that’s about as unfortunate a place to have a QC issue as you can get. Like the other GT characters, Maximus has a clear visor to imitate a race driver’s helmet and a microphone/mouthpiece for his car-to-pit radio. Four toys in and I am still absolutely sold on this idea, a nice touch and well implemented on all four characters. 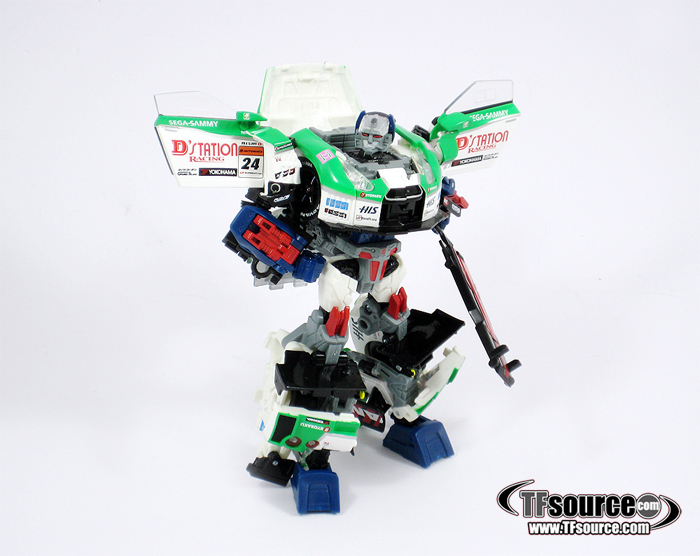 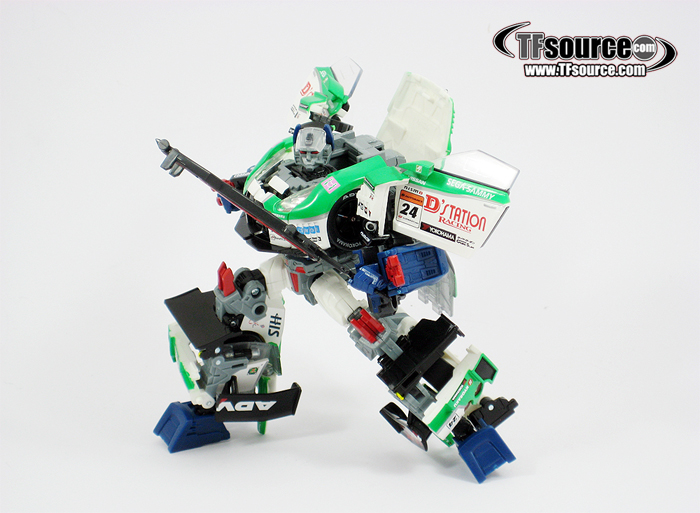 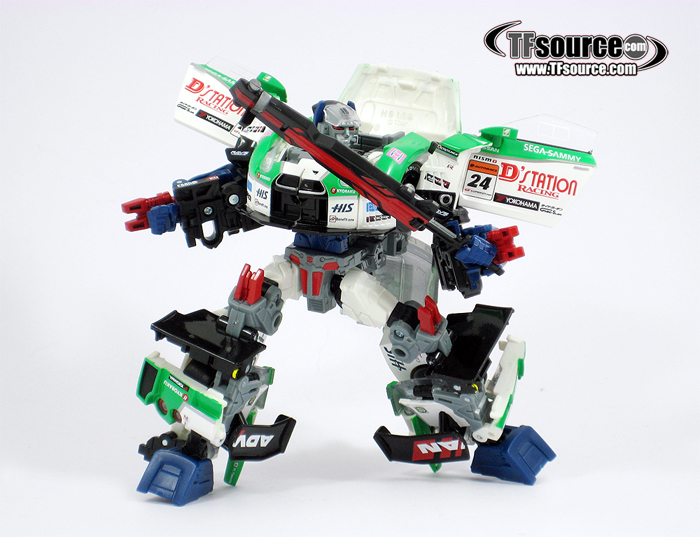 The original Fort Max toy had the green window/flap on his shoulder so that colour is not completely out of place on GT Maximus. The extra bulk of the Super GT version of the Alternity GT-R mould suits Maximus right down to the ground, and he is arguably the closest in feel to the original toy of the 4 Transformers GT releases, partly explaining why some have opted to buy Maximus and skip the others.

You know you can hear the engine notes

Speaking of the others, while each individual member of the TFGT toy line can be appreciated thoroughly as a standalone marvel and a solid addition to any collection in their own right, as racing cars, the pull of creating a grid of Transforming Super GT GT-Rs was what got me hooked in the first place. When displayed together, the figures make a whole lot of sense, especially in vehicle mode. 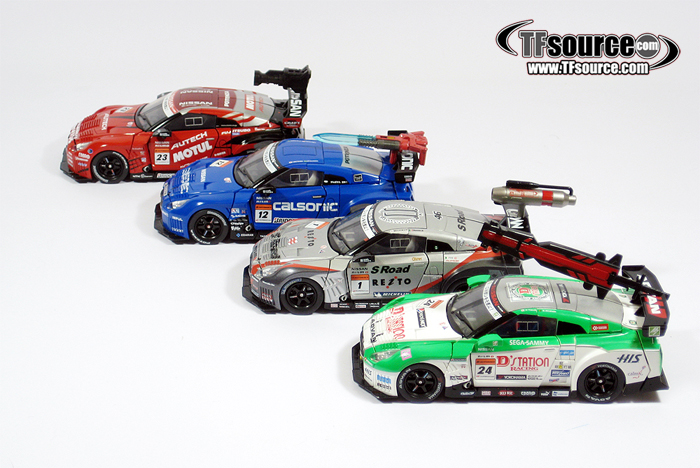 Yokohama tyres on Maxmius, Michelin on Megs and Bridgestone on prime and Saber

When you look at them you either see 4 more recolours of Alternity GT-R or you see a perfect amalgamation of one of the most recognisable racing series in the world given life as well-known Transformers characters, executed beautifully and with thought.  These toys are all about display options and looking good. The accessories – all of them racing themed – can be held as weapons, attached to the vehicle mode for some purpose and still retain their G1 references. Even if the cars are more modified road car than bespoke race car, next year’s Super GT rules will mean these boys will look a lot like the actual track cars from 2014, so that’s something. 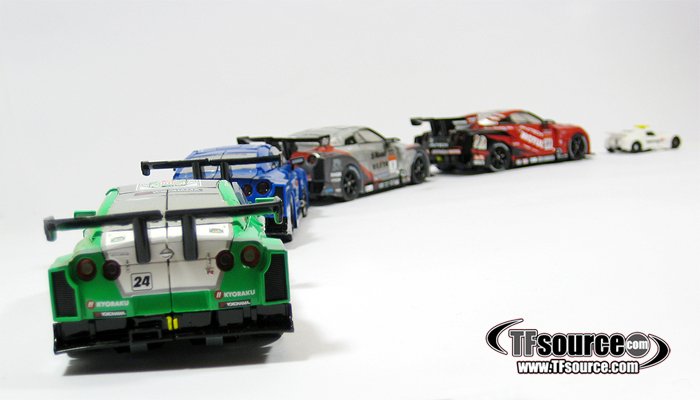 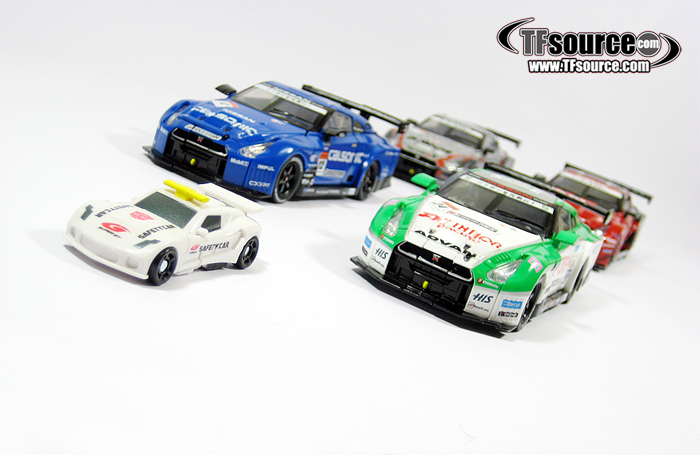 Scale? Who cares about scale...

Like I said, display options. Even though the race-day exclusive giveaway figure “Safety Prime” is legends class, and the GT sisters are too large to be properly in scale with the cars in vehicle mode, it doesn’t matter. Transformers GT does not have the crippling weight of G1 nostalgia that is evident through the Masterpiece line where The Scale is holy. It doesn’t even experience shame at advertising the compatibility with MP-10’s trailer on GT Prime’s packaging. 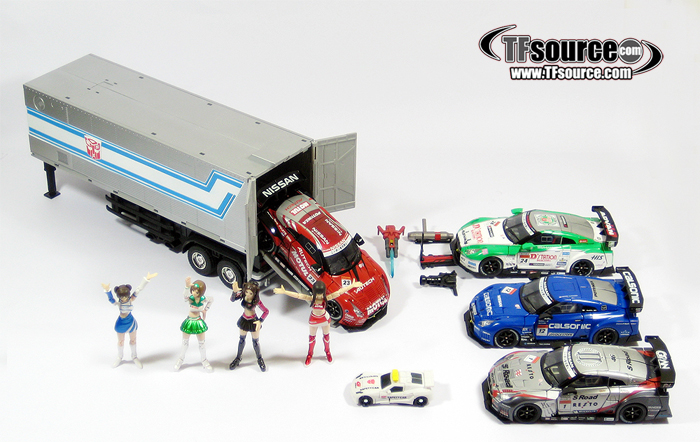 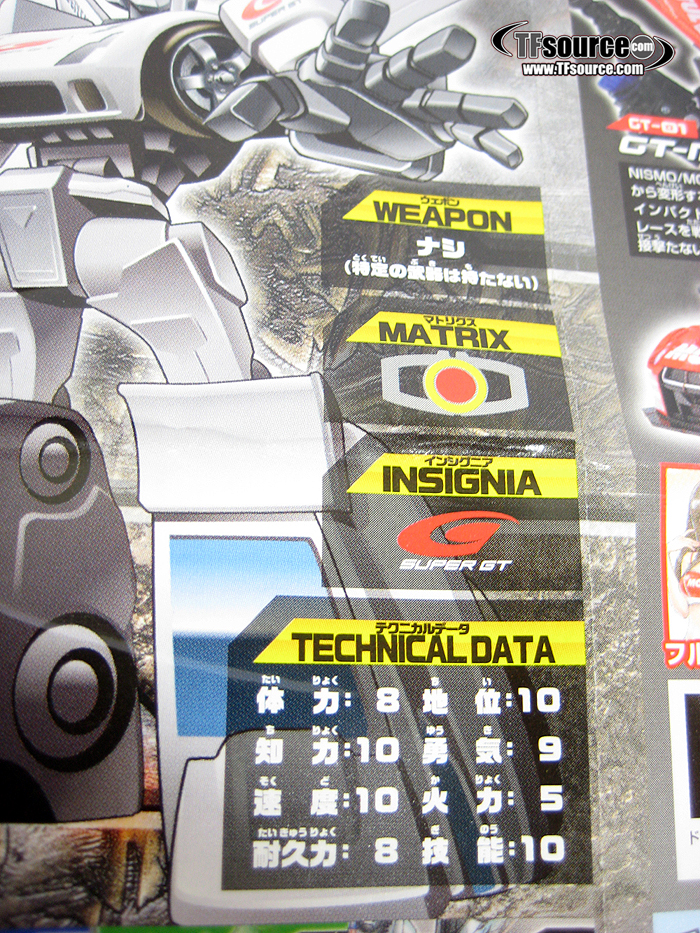 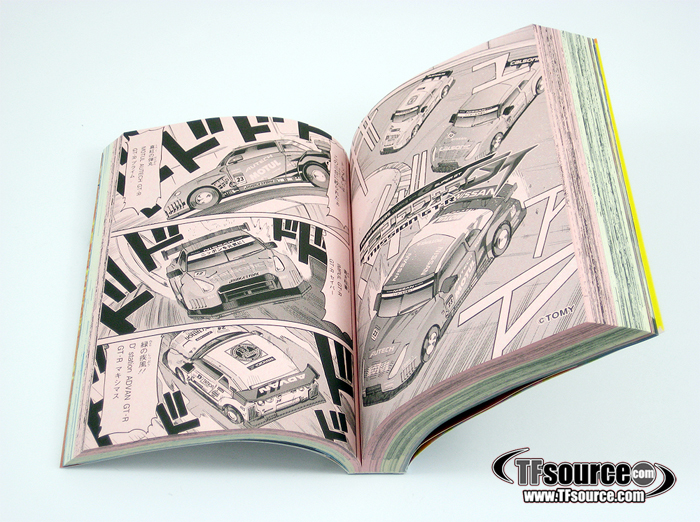 The one shot TFGT manga that was featured in July’s KeroKeroAce magazine – while it does exist in a pre-established universe – is completely its own thing. Trying too hard to fit this line of figures in with some of the contemporary Transformers products on the market now or from recent years is just going to result in a lack of appreciation for what Super GT and TakaraTomy have achieved with this collaboration.

Oh yeah, this is Autobots vs Decepticons after all 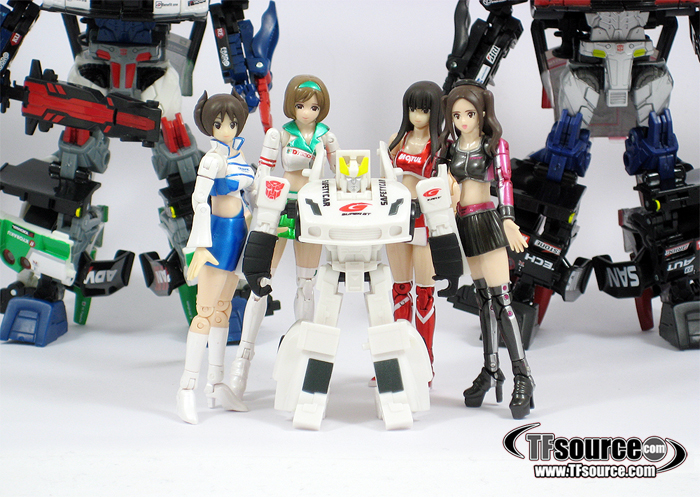 Safety Prime gets all the girls (AKA "the 1-hour shot")

All the figures together do make some degree of sense in a racing context, because Star Saber, Fortress Maximus and Optimus Prime versus Megatron – refereed by Midget Prowl – certainly makes no sense in a Transformers context. No amount of photography, gushing or justification via motor sport enthusiasm is going to stop the naysayers seeing these as over-priced repaints that would ultimately take funds away from their Masterpiece, vintage or 3rd party collecting. Maybe If I hadn’t originally gotten GT Prime and Saber in hand to review for this blog, I may never have decided to divert my money away from other things to commit to the whole line either, once seen in person I think any Transformers collector can understand the appeal of these figures. 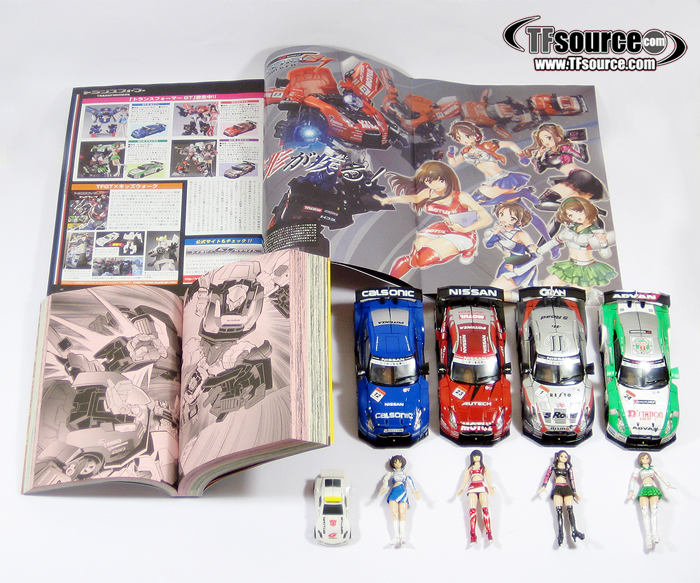 Transformers GT - in its entirety 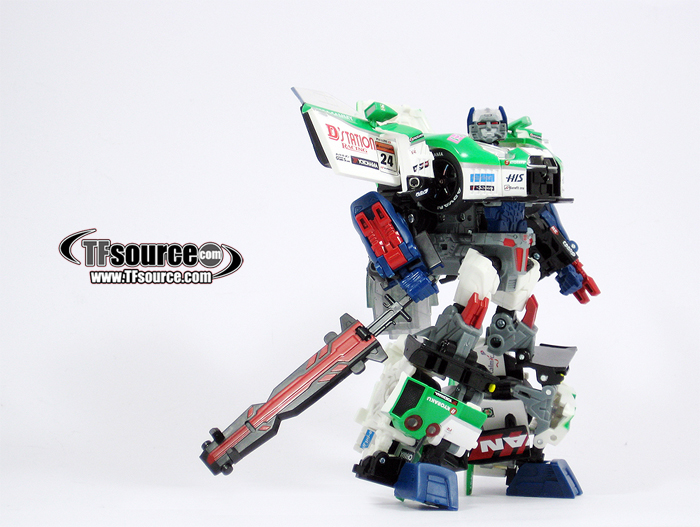 GT-R Maximus ends this wonderful series of figures on an excellent high, no doubt about it. There is nothing at all awkward about the shoehorning of the former citybot into a line of 1:32 scale racing cars, and as the above picture demonstrates, he still looks imposing despite his diminutive size.  Yes, it bothers me that we aren’t getting the whole SuperGT grid of Honda and Lexus GT cars and that the hood/front grill sections do not always align properly. It’s a shame that the recent Dengeki Hobby- featured full-size 1:32 Safety Prime was just a custom made from Alternity Magnus and not another official release for this short-lived adventure, but we have what we have. And what we have is a welcome return to some imagination that isn’t dragging around a ball and chain dated 1984, and fully sponsor-laden race car Transformers. 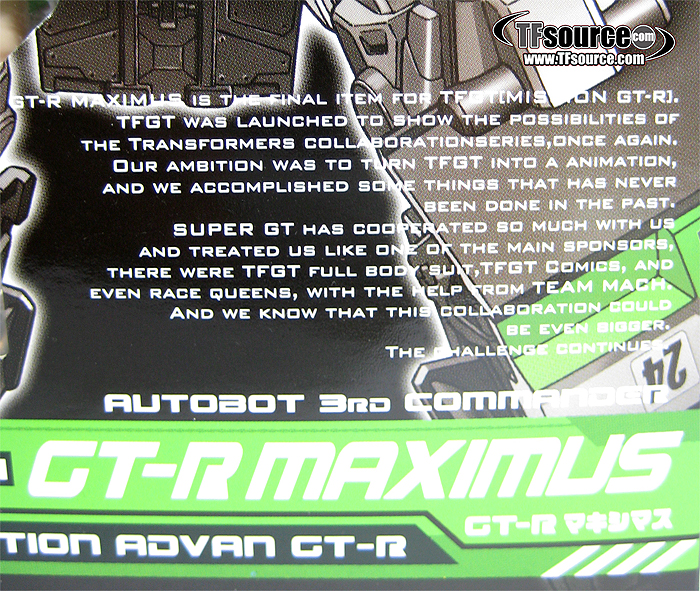 Quoting from GT Maximus’s box front, here’s their tribute to the series in place of the character history we got with the three previous releases:

“GT-R Maximus is the final item for TFGT [Mission GT-R]. TFGT was launched to show the possibilities of The Transformers collaboration series, once again. Our ambition was to turn TFGT into a animation and we accomplished some things that has never been done in the past. Super GT has cooperated so much with us and treated us like one of the main sponsors, there were TFGT full body suit, TFGT comics, and even Race Queens, with the help from Team Mach. And we know that this collaboration could be even bigger. The challenge continues”.

So who knows, maybe there will be a future revisiting of the relationship between SuperGT and Transformers, I’d welcome such a thing wholeheartedly. I wouldn’t be surprised if it was through Nissan again, just tonight I was the subject of an interview about how Nissan and Sony PlayStation3’s Gran Turismo GT Academy had increased awareness and people’s opinion of Nissan as an innovative and forward-thinking brand. For now, I’m just thrilled to finally be able to create the long-promised “Dream Pit Stop”. Take it away, Sisters… 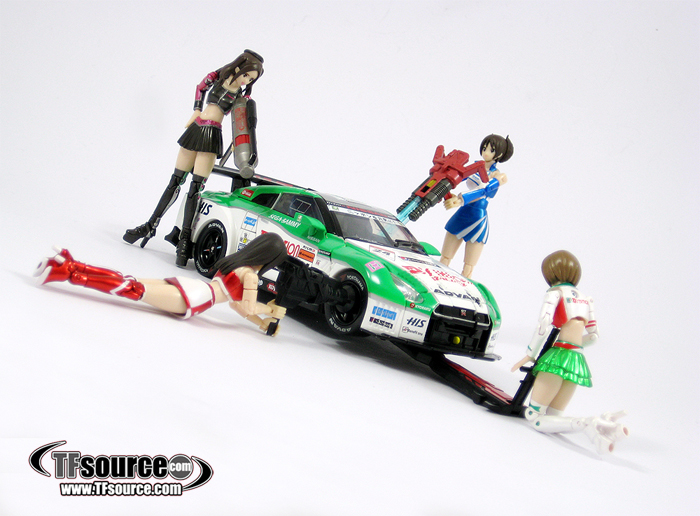