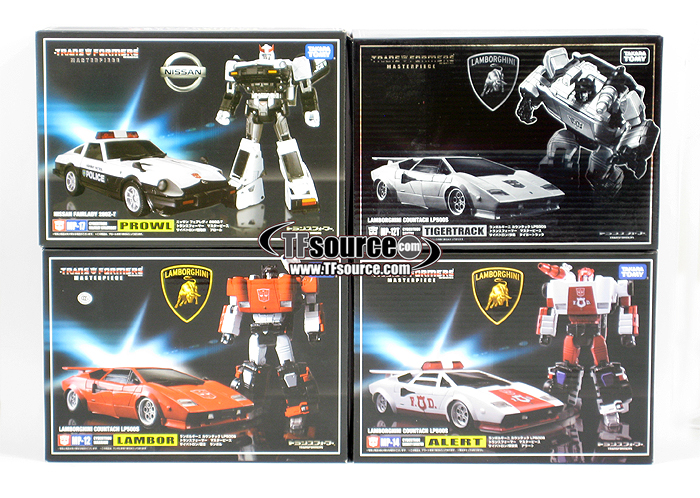 In the world of Transformers collecting, instant gratification is big – just listen to the complaints when a package is late. So this pre-ordering game for Masterpiece Transformers or 3rd party products is a bit new to some of us, paying for something in March and receiving it in October, 7 months later. During that time, the company responsible for capturing our imaginations tweet shots of prototypes, distribute production sample photos and entice us with images of the items on display at various Asian toy shows or events. When the frenzy reaches climax and online retailers begin to ship out orders, do these toys meet our expectations?

October 2013 has seen the arrival of Masterpiece MP-17 Prowl and Mastermind Creations Feral Rex member “Bovis” (3rd party version of Predacon Tantrum), two of the most highly-anticipated figures of the last decade, surely. Prowl has brought the dream of an entire season 1 Transformers G1 cartoon cast one step closer to reality, and MMC have threatened to blow the other unofficial Predacon releases out of the water with their Feralcon team, of which Bovis is the first. This week we focus on Masterpiece Prowl,  and next week we’ll turn our attention to Bovis together with another Transformers-related release that has been hotly anticipated. 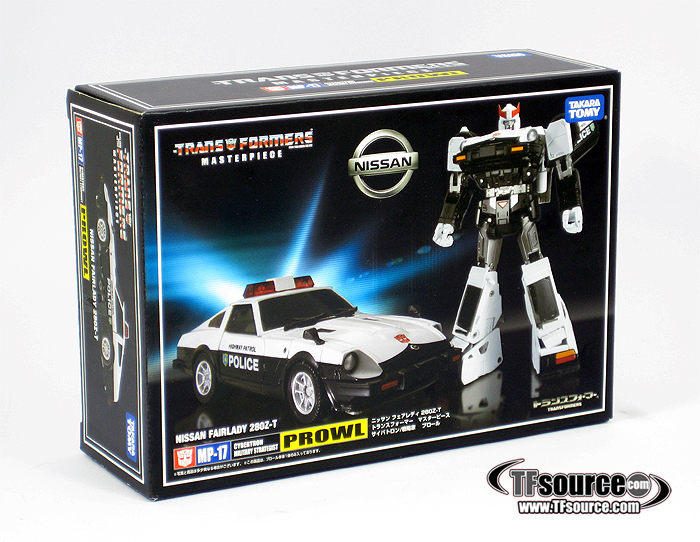 Nissan and Transformers - a beautiful partnership 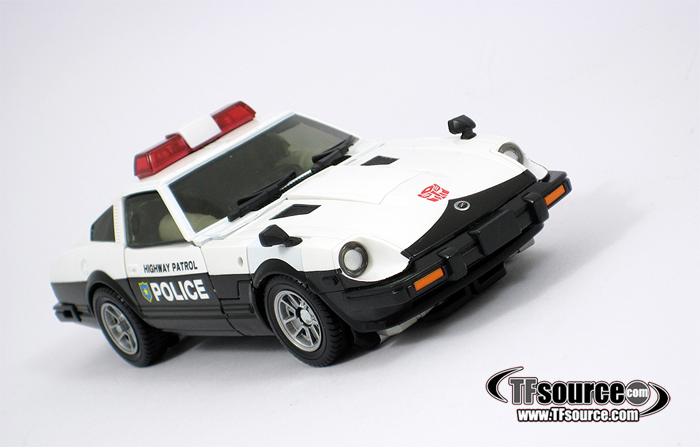 The Masterpiece Sideswipe (Lambor) mould was, by and large, a huge success. Any brand new Masterpiece mould immediately becomes the most talked about thing on collector forums, so when TakaraTomy announced the Datsun trio of Prowl, Bluestreak and Smokescreen, temperatures rose and pre-orders flowed. MP-17 Prowl had a lot to live up to and its success, its quality, could be used as yet another assurance that TakaraTomy would not let us down in fulfilling our long-term dream of assembling the crew of the Autobot Ark in the Masterpiece image. 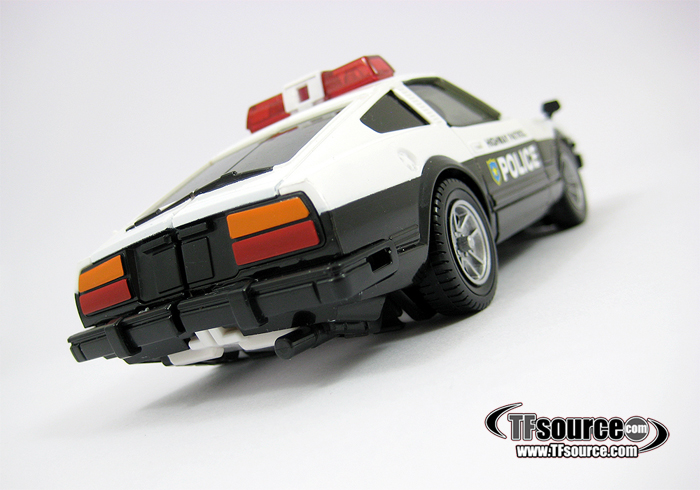 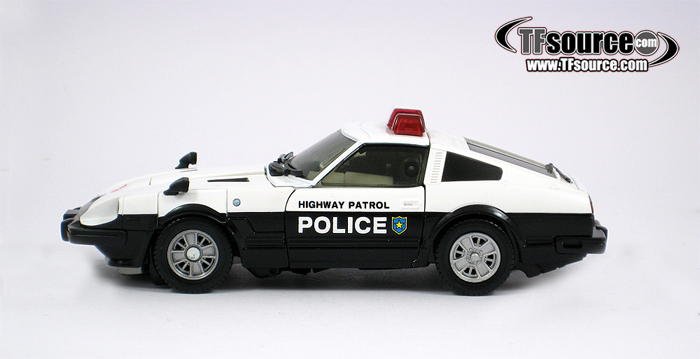 The usual concerns were bandied about prior to release, “The legs are too thin”, “I want rubber tyres and die-cast metal”, “What the heck is Highway Patorol?”, but I think it’s fair to say that when Prowl finally started reaching collectors about 2 weeks ago,  he was worth every second of the wait – which even saw it delayed by a few weeks. The excitement for Bluestreak and Smokescreen, at least for me personally, has gone up a notch. Collectors are now also clamouring for official images of the alleged Masterpiece Wheeljack and Bumblebee that online retailers have offered for pre-order. 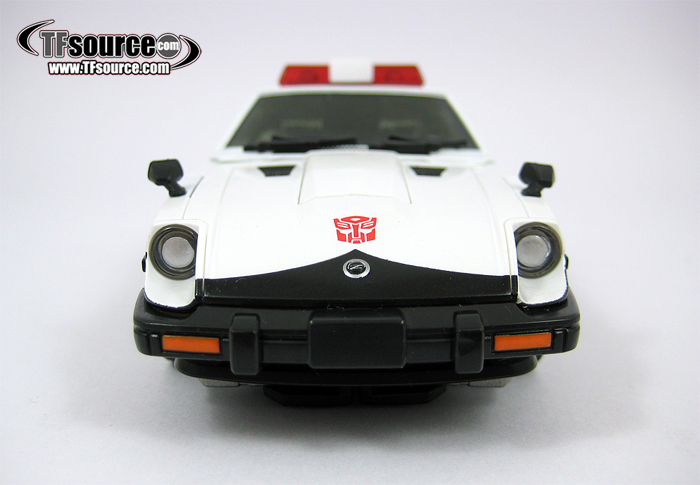 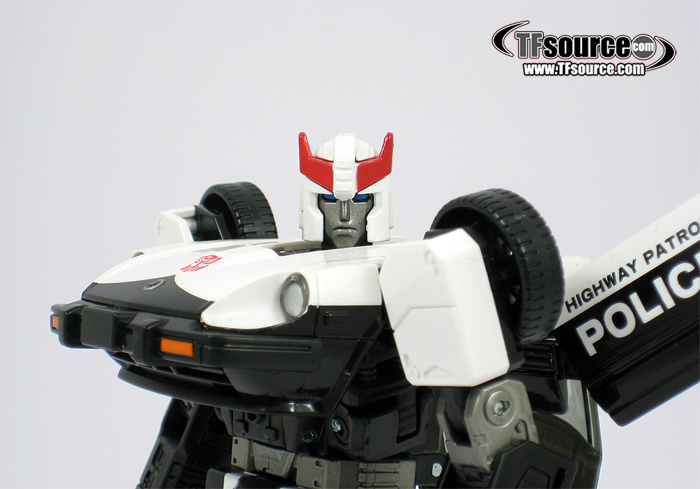 The best head-sculpt on a Transformer ever?

This glorious officially-licensed Nissan (Datsun) Fairlady 280Z-T police car transformer, our beloved Autobot strategist Prowl, is a delicious combination of a faithfully recreated Datsun 280Z and the Sunbow cartoon model of Prowl, right down to the breathtakingly nailed head-sculpt and face. They simply could not have gotten his look more…right. Compared to the Lamborghini Masterpieces, from what I can see Prowl has far fewer paint application issues that could cause rage and offence, but then I was never adversely affected by the finish of the Countaches. 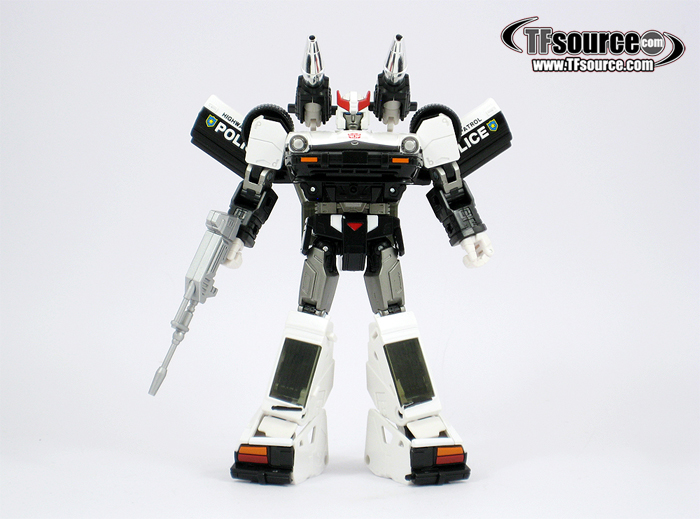 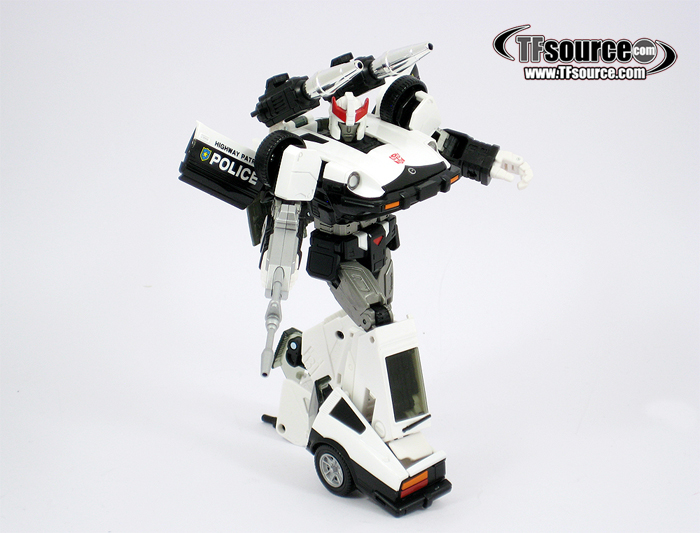 If cartoon accurate looks and real-life vehicular accuracy aren’t enough for you, there’s always the Amazon-exclusive missile launchers that are based on the original G1/Diaclone toy accessories. In the style of Binaltech BT-07 Smokescreen GT, Masterpiece Prowls ordered from Amazon in Japan came with one exclusive launcher sealed in a baggie. So if you want a complete set of launchers, you need to buy 2 MP Prowls or as the original intention and premise suggests, order MP-18 Bluestreak from Amazon too in order to get another launcher. Sneaky, underhand, expensive and altogether unacceptable. Once you’ve gotten over that, they’re bloody gorgeous. They fit over the built-in white launchers which are based on Bluestreak’s cartoon-model launchers. There is an image in the paperwork with Prowl sporting the same type of launchers in one episode of the G1 ‘toon, but it seems that scene featured a mis-coloured Bluestreak, so you can draw your own conclusions about the provenance of the thing. 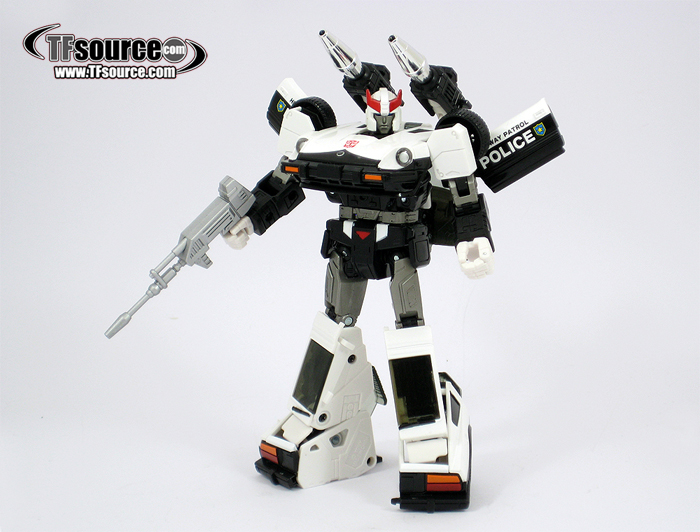 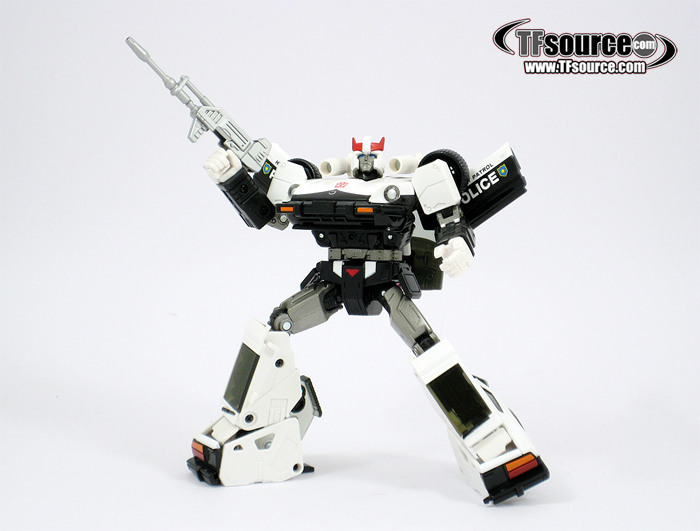 Yes, maybe Prowl should have been released with the launchers seeing as how he’s quite light on accessories, but then again if you are someone who appreciates a fully animation-accurate representation, they’re just surplus to requirements anyway. I felt they brought a nice completeness and balance to the figure, and I appreciated having the display choice. I’m sure Dr Wu will satiate those who have not gone the Amazon route.

Prowl’s transformation is just as complex as it needs to be, with the precise order of what to do with the legs posing the greatest challenge. While the shoulders don’t click into place as some would prefer, his poseability is everything you could want, allowing him to be displayed in a range of dynamic action poses or relaxed authoritative stances. What TakaraTomy have accomplished with the design and functionality of his feet is particularly impressive. 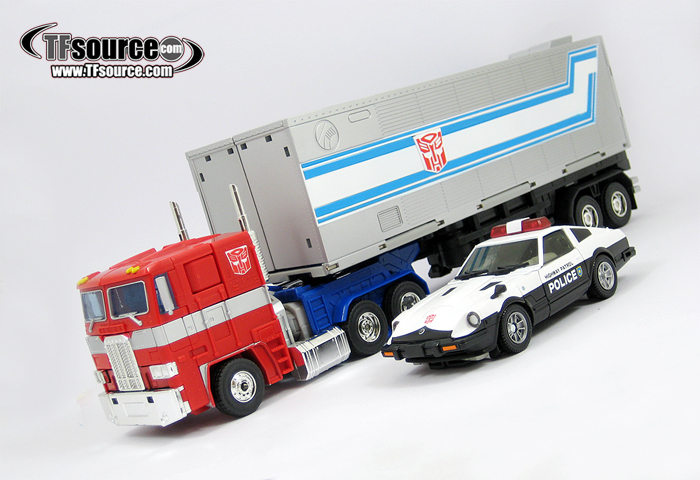 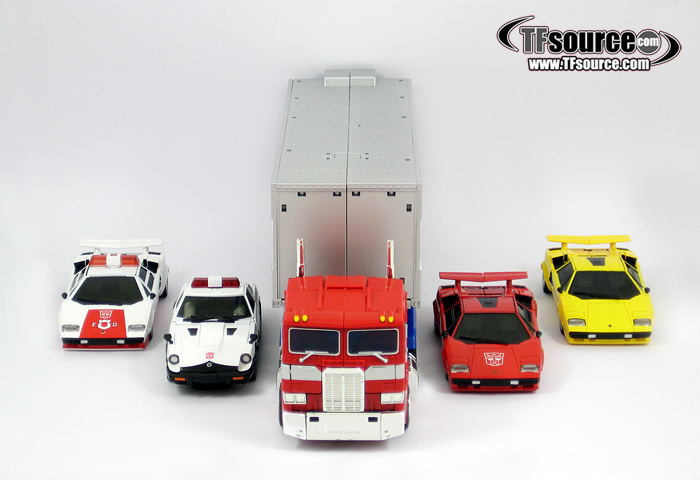 As stunning and remarkable as these Masterpieces toys are as standalone figures, it’s the growing ranks that really bring out the best in this line, the big picture that has so many collectors throwing in their vintage, Classics and Prime towels to focus solely on assembling ‘the cast’. Even though Tigertrack wasn’t an original G1 cartoon character, and really doesn’t quite fit the bill as a Sunstreaker stand-in, just seeing Prime surrounded by Autobot cars can be quite stirring. 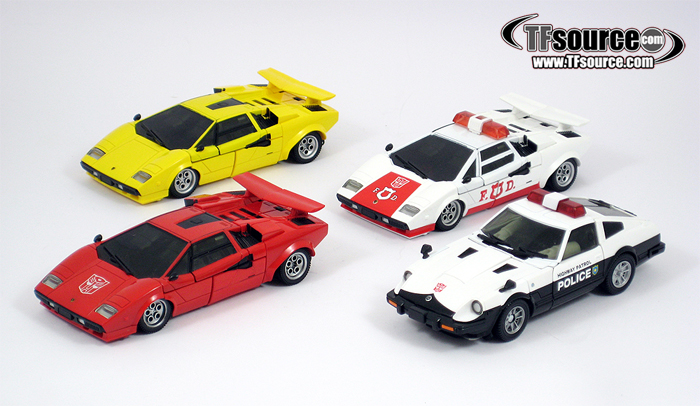 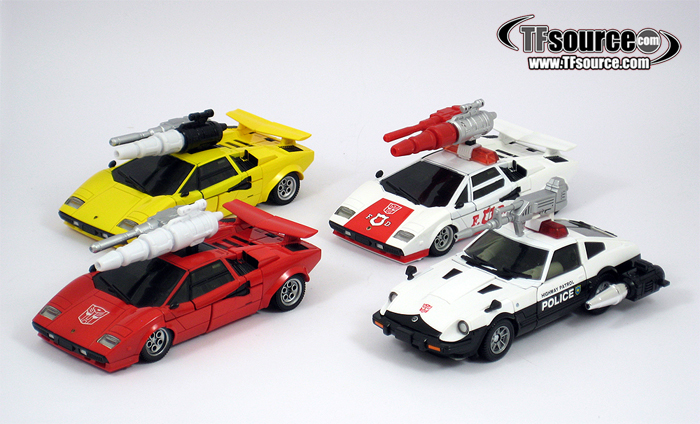 Just the cars alone are a display marvel, and the thought of adding Bluestreak and Smokescreen to their number within a matter of weeks – apart from giving me palpitations about display space – is a tremendously exciting prospect. Even the slightly awkward-looking attack modes seem to sing when the cars are together. Prowl fits in with the current Masterpiece releases effortlessly, and some would even argue he is more of an achievement than Sideswipe, certainly featuring less obvious compromises to meet the price point and scale. 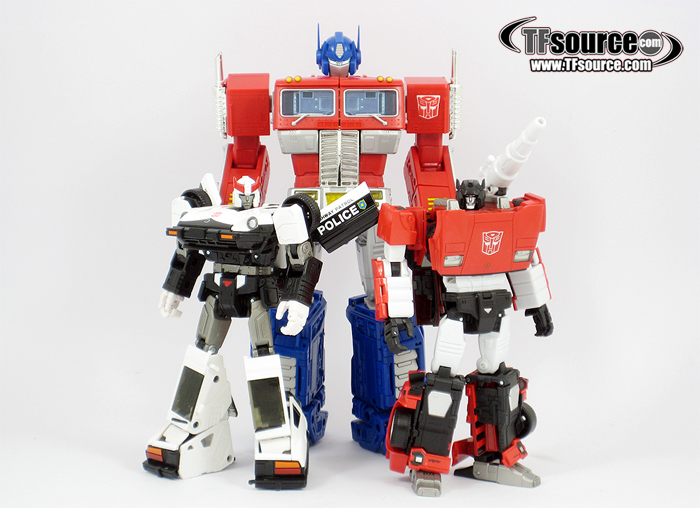 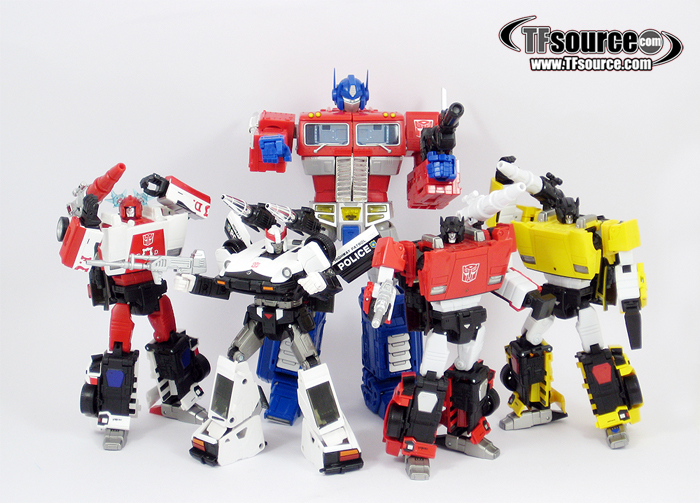 Can you imagine this with Bluestreak, Smokescreen, Wheeljack...

While Prowl cannot boast the complexity of the larger Masterpiece figures, the dripping sex appeal of the Lamborghini Countach vehicle mode done justice or the gimmicks and add-ons of Soundwave, there is not one capacity in which I can class him as a disappointment. Quite the opposite in fact, I actually struggle to express how ‘right’ they got everything, starting with the he-just-walked-off-my-TV-screen looks and finishing with numerous display options he affords the collector. 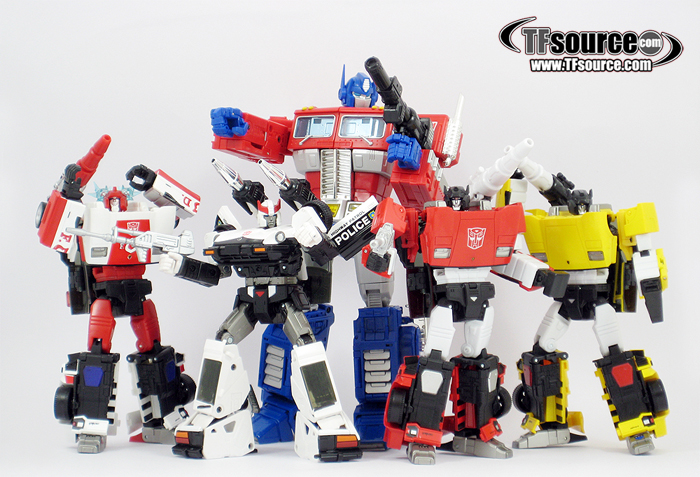 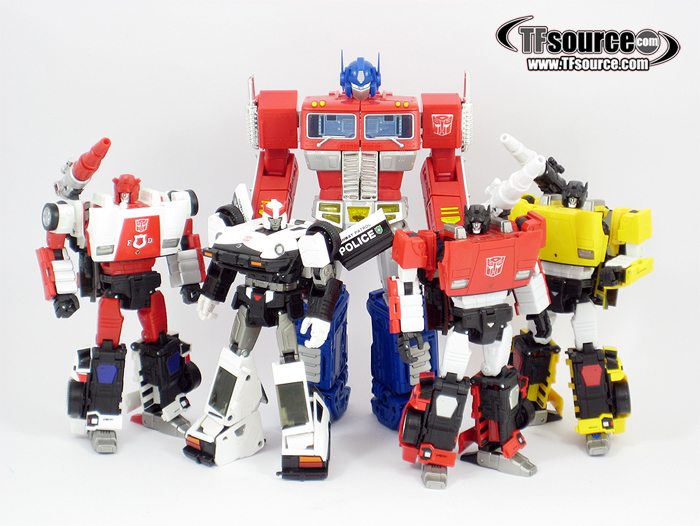 I have to be honest, my commitment to the Masterpiece (re-) revolution was beginning to wane, I was considering opting out of my Feralcon pre-orders and even backtracking on the Soundblaster/Ratbat, Bluestreak, Wheeljack, Bumblebee and Smokescreen orders I had placed. Space and cost concerns were beginning to add up and I needed a reason to continue down this path. Prowl is that reason. At a time when I care more for comics than toys, and opening newly-arrived pre-paid-for toys is more incidental than inspirational, I just have to admit that MP-17 has won me over and renewed my enthusiasm. There’s also something to be said about jumping on pre-orders before more wretched counterfeits muddy the waters further. 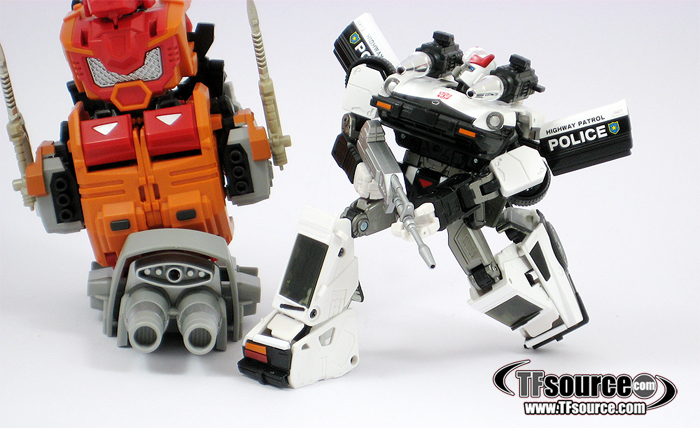