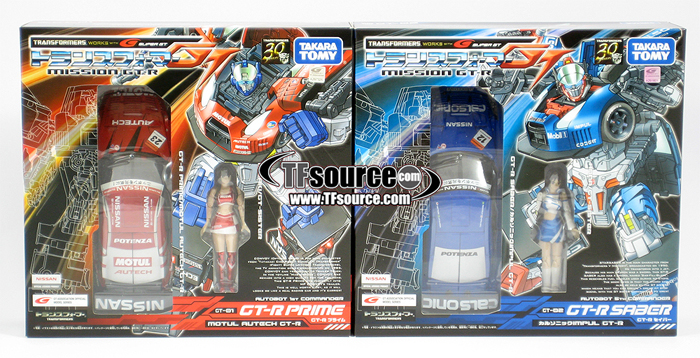 What do you get if you cross G1 Transformers characters, moulds from the Binaltech/Alternity conceptual era with Japan’s premier touring car series made famous in the Western world by legendary Sony PlayStation racing series Gran Turismo? Other than the messy shrapnel from my blown combined-hobby-overloaded mind, the result is Takara Tomy’s 2013 exclusive sub-line “Transformers GT”. Combining the much-used 1:32 scale Transformers Alternity Nissan R35 GT-R mould with the Japanese Super GT racing series (formerly JGTC), Transformers GT continues the recent trend of fully licensed car manufacturer branding on new Transformers. And I for one could not be happier.

Transformers GT comes with the sub-heading “Mission GT-R”, making direct reference to the fact that the only four toys announced for this sub-category so far are re-tools of Nissan’s revolutionary and pioneering R35 GT-R used heavily in Takara’s Alternity toy line. The Super GT series in Japan consists of two main categories, the premier GT500 class and the lower-tier GT300 class (500 and 300BHP restricted cars respectively). The GT-Rs featured in Transformers GT are from the GT500 class which also boasts entries from Lexus and Honda. The thing is though, since these toys are based on the 2012 Super GT entry list, and that season only contained four Nissan GT-R race cars – all of which have already been revealed for Transformers GT – unless there are major plans afoot to create new moulds for Honda’s HSV-010 and Lexus’s SC430, this is going to be a very short-lived adventure. 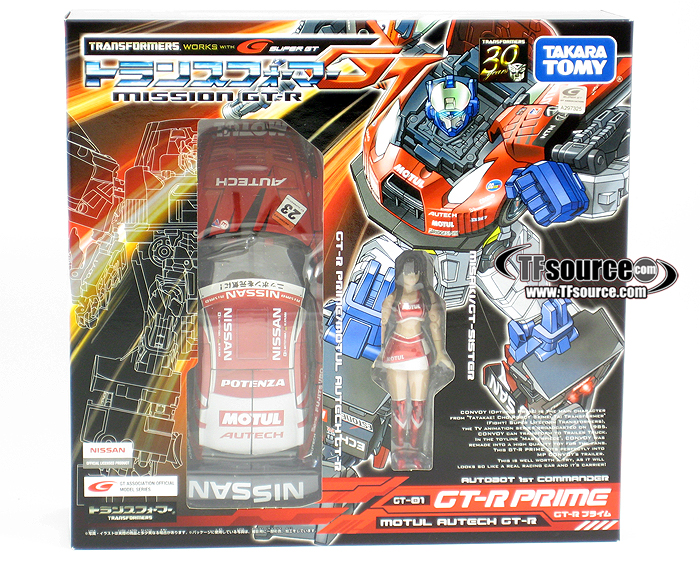 Great art, contents clearly shown, what else you want? 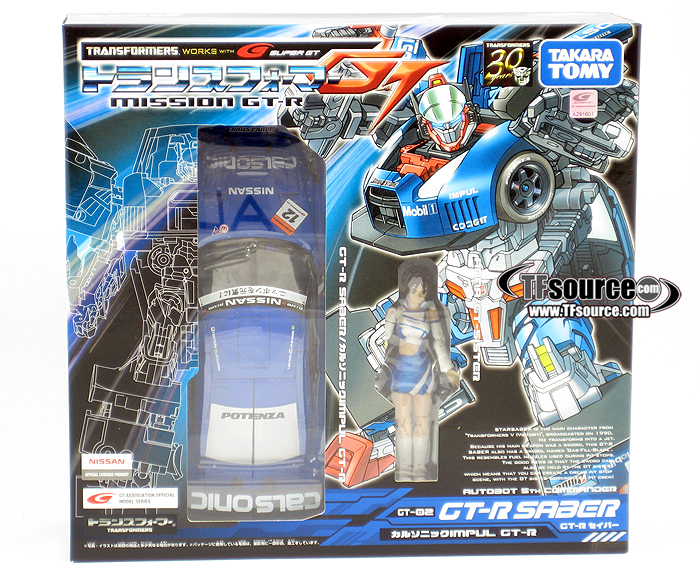 Star Saber as a Calsonic Skyline. My wildest dreams.

Enough for now about motor racing, what about the toy line? Well, Transformers GT launches with GT-01 Prime and GT-02 Saber, both hugely popular and well-known Cybertron (Autobot) leaders in Japanese animated Transformers fiction. Further releases will include GT-03 Megatron and GT-04 Maximus. The Nissan GT-R road car has been re-tooled to resemble the 2012 Super GT race car, so actually the toys are more like road cars with body kits instead of the bespoke race-bred Super GT monsters that bear a very close resemblance to their base road car silhouettes. Super GT cars are much lower and aerodynamic than the sports cars they are modeled after by the manufacturer teams. It should not be a surprise to collectors that Takara Tomy re-tooled the Alternity road car GT-R mould instead of starting from scratch to produce accurate Super GT models – many won’t care because the sponsorship logos and race liveries are utterly breathtaking and perpetuate the illusion of race cars beautifully.

The robots also come with smaller Microman-style super-poseable “GT Sister” partners, race queens, whatever you want to call them. They have their own names and profiles, so they’re not just generic additions, and they wear team colours. The packaging for Transformers GT is quite busy and bright, the toys are stored in vehicle mode and mostly visible with a smaller window to showcase the GT Sister as well. The right hand side of the box front is largely taken up with dynamic character artwork (which will always trump toy photography) with a blueprint-style robot diagram on the left side of the box front. Plenty of logos too.

Not an inch of cardboard left unadorned

The back of the packaging is no less crowded, showing the two modes of the Transformers GT toy within and its key features, a profile for the GT Sister and some team & technical information about the specific race car upon which the character is based. Prime is a #23 Nismo Motul Autech GT-R and Saber is a #12 Calsonic Impul GT-R. In 2012 the Nismo entry was driven by Japanese racing journeyman and legend Satoshi Motoyama and well-known Nissan factory driver Michael Krumm. The Calsonic drivers in 2012 were  Joao Paolo De Oliveira and Tsugio Matsuda. Convoy’s GT Sister is “Misaki”, and Saber’s is “Anna”. 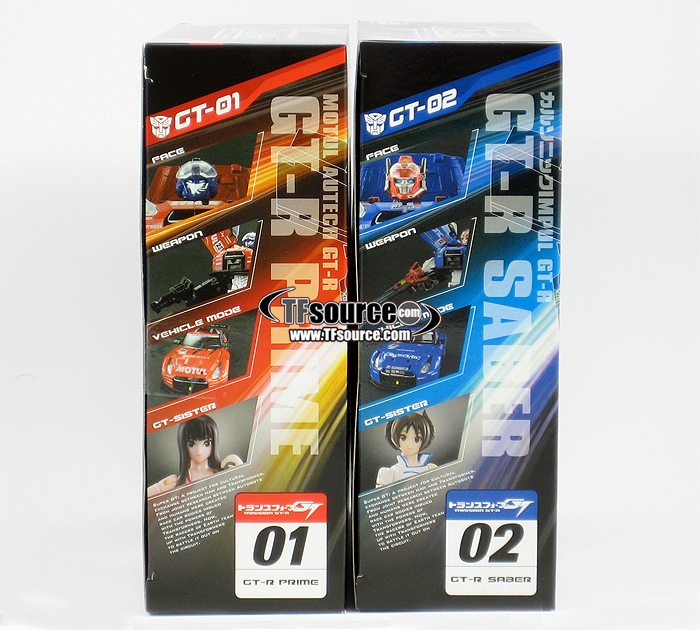 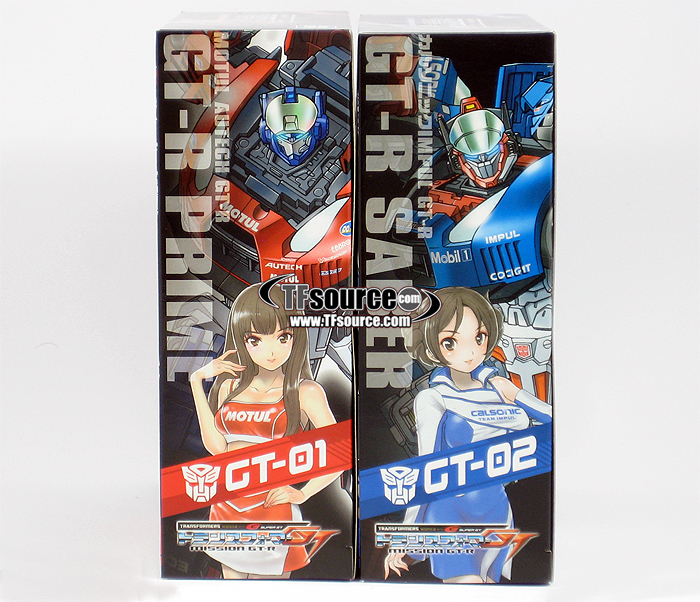 If only we could get the whole Super GT grid

The sides of the packaging could quite easily have been an afterthought, but I like what TakaraTomy have done with them. One side shows only toy and content photography but also a race number-style designation plate “01” and “02” for Prime and Saber respectively. The other side shows robot and GT Sister artwork, also quite attractive and highly uniform. We like uniform display options!

In the first picture, below the GT Sister’s toy image it reads “Super GT: A project for cultural exchange between man and Transformer. From joint research between Autobots and humans were created race car bodies imbued with the power of Transformers. Now, the racers of Earth team up with Transformers to battle it out on the circuit”. This is one of a number of interesting little blurbs on the box and paperwork, fascinating how despite being a Japanese release, TakaraTomy are using “Prime” instead of “Convoy” and “Autobots” instead of “Cybertrons”. Plenty of English text on the packaging too. 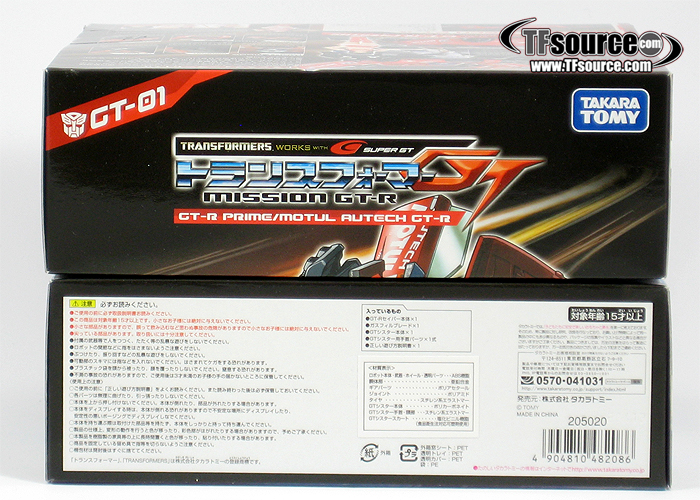 Some writing and the top of a door, finally a breather for your eyes.

Box top and bottom are not particularly exciting, with the top showing the main logos and prominent brand visibility again and the box artwork over-spill. Legal, safety and consumer stuff on the bottom. Here are some close-ups of the various things scattered around the packaging that may be of interest, starting with the top corners of the box front: 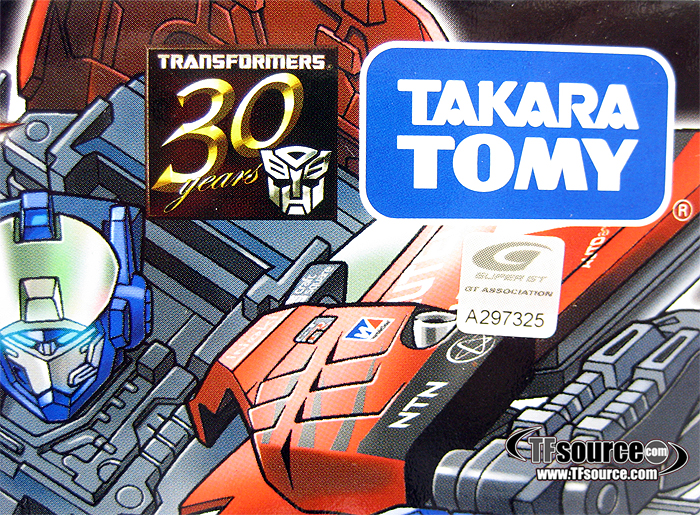 In case you had any doubts as to those responsible 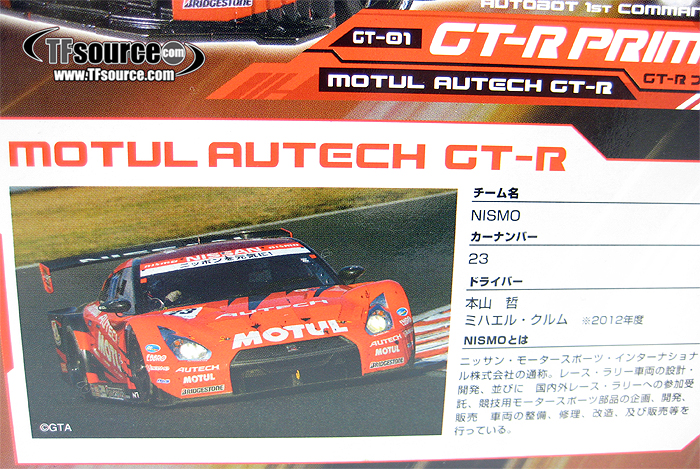 You can see how much lower the actual race car is

Transformers works with Super GT. Damn right it does.

We can see that the Transformers GT line falls very much within TakaraTomy’s 30th anniversary celebration of the birth of the Transformers brand, and also contains plenty of stickers, logos and text to signify the fact that these toys are official Super GT and Nissan-associated products. One can hope that if the line is successful, they might expand to “Mission HSV” and “Mission SC430”. One can also dream on… 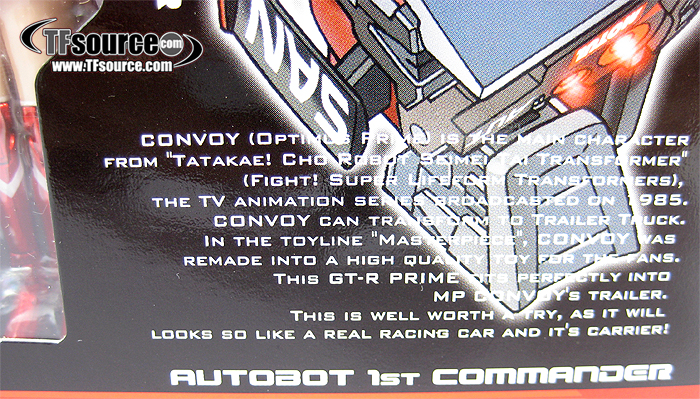 Convoy the Autobot or Optimus the Cybertron?

One very noticeable feature of the character selection for Transformers GT is that only commanders and leaders have been chosen; 3 Autobot and 1 Decepticon. GT-R Prime is designated as “Autobot 1st Commander” and his bio on the box front reads as follows: “Convoy (Optimus Prime) is the main character from “Tatakae! Cho Robot Seimei Tai Transformer (Fight! Super Lifeform Transformers), the TV animation series broadcasted in 1985. Convoy can transform to a trailer truck, In the toyline “Masterpiece”, Convoy was remade into a high quality toy for the fans. This GT-R Prime fits perfectly into MP Convoy’s trailer. This is well worth a try, as it will looks so like a real racing car and it’s carrier!”.

Now, if you just see past the grammar and punctuation issues, this is quite a cool thing to include on the packaging and demonstrates the slightly wider-than-imagined target audience for these toys. For a start they are popular national racing cars that turn into awesome-looking robots, so the appeal for children and hero-worship is boundless. They are also clearly collector-focused, one look at the price tag confirms that. The cross-promotion with Masterpiece toys and the use of both Japanese/US Transformers naming and convention may also indicate that TakaraTomy want Transformers GT to appeal as much to Western collectors as it should to domestic “fans”. 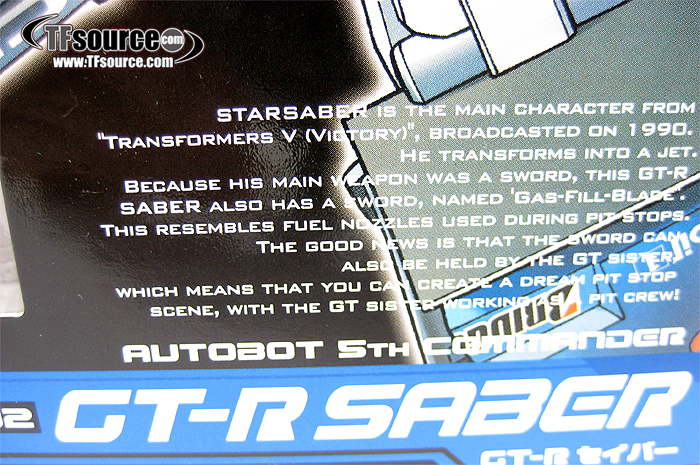 That's not MY dream pit-stop...

Going by Japanese continuity, GT-02 Saber is designated as “Autobot 5th Commander” (after Convoy, Rodimus Convoy, Fortress Maximus and God Ginrai). His bio reads: “Starsaber is the main character from “Transformers V (Victory)”, broadcasted on 1990. He transforms into a jet. Because his main weapon was a sword, this GT-R Saber also has a sword, named ‘Gas-Fill-Blade’. This resembles fuel nozzles used during pit-stops. The good news is that the sword can also be held by the GT Sister which means that you can create a dream pit stop scene, with the GT Sister working as a pit crew!”.

More references to the original Japanese continuity and highlighting of the fact that Transformers GT carries direct homages to the past and its significance in shaping the Transformers universe, while at the same time promoting the play value of these new figures and their racing nature. You can look forward to the “dream pit stop scene” and Masterpiece trailer tomfoolery in Part 2 of this article next week. 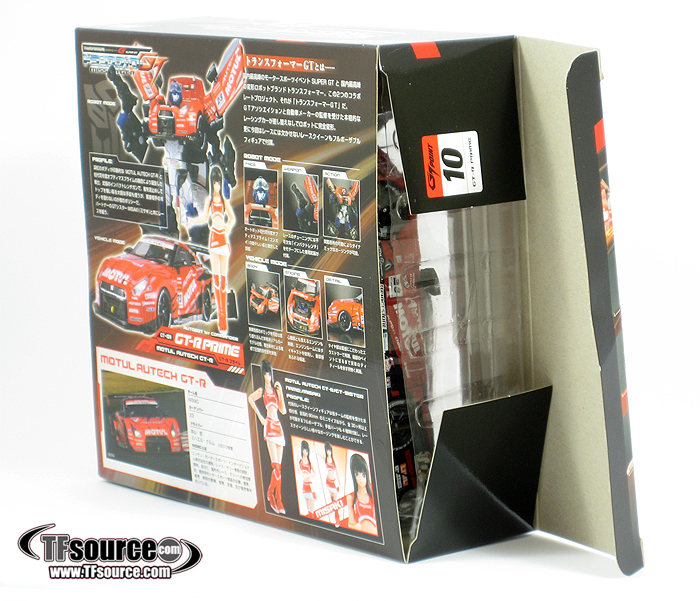 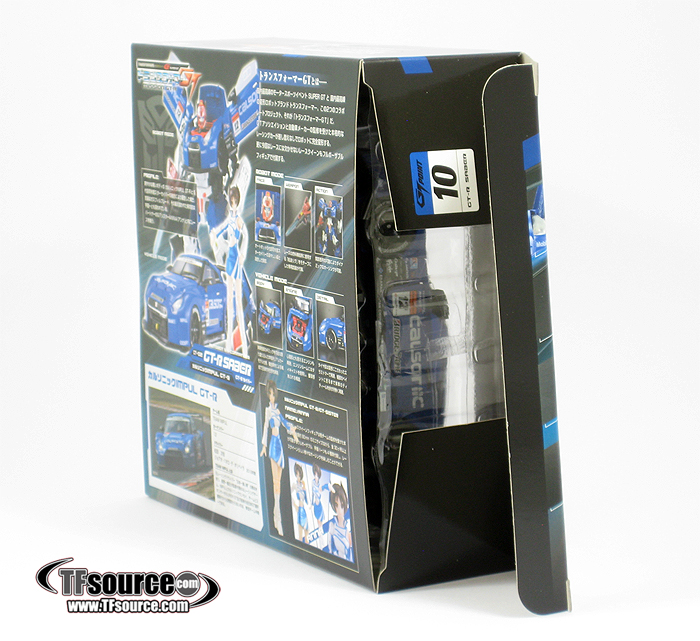 Keeping it blue throughout

Finally, to the contents. Almost. Opening the side flap with the toy photography reveals 10 “GT Points” for either GT-R Prime or GT-R Saber. Apparently these GT Points can be used towards the 30th Anniversary Takara Transformers Masterpiece “Fans Poll” to choose which Cybertron leader Takara Tomy should make into a Masterpiece toy. Apart from that, it’s pretty no-nonsense, you have the GT-R vehicle, hand-weapon and GT Sister in a clear plastic insert tray and a paperwork baggy. No twisty-ties, elastic bands or any such fiddly gimmicks securing the toys in place. 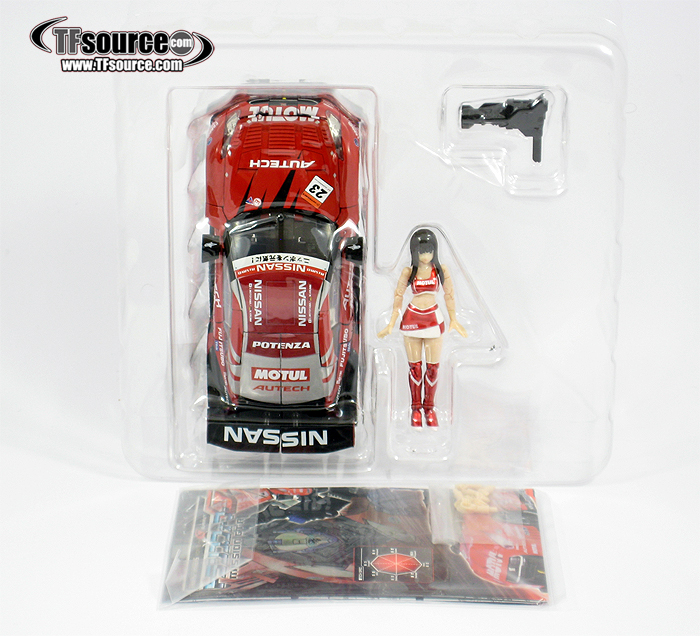 The car, the girl, the gun. 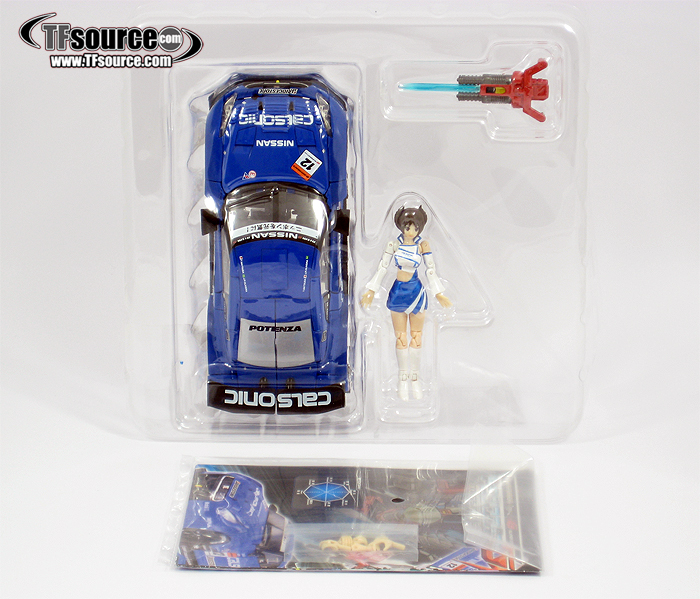 I’d seen the pictures of the toys on display at various Japanese shows, the hi-res stock photography distributed to online stores and I’m very familiar with the actual racing cars these Transformers GT figures are based on, but setting eyes on them for the first time suspended in the clear plastic insert packaging covered in completely accurate sponsorship logos and lovingly painted up was a genuinely moving experience. These toys are a beautiful marriage of one of the best-looking and well-engineered Transformers of this size ever released and my other great passion, racing cars. I knew from the very first announcement that I’d be on board with this series concept-wise, I’m glad to see the execution has not let the concept down. I also quite liked the fresh model-paint smell of these brand new figures. 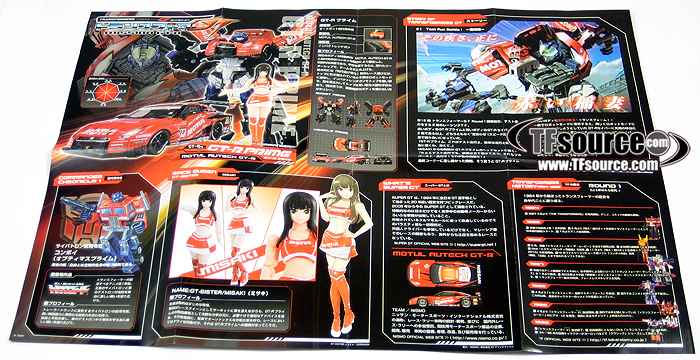 You can't say you're not getting bang for buck... 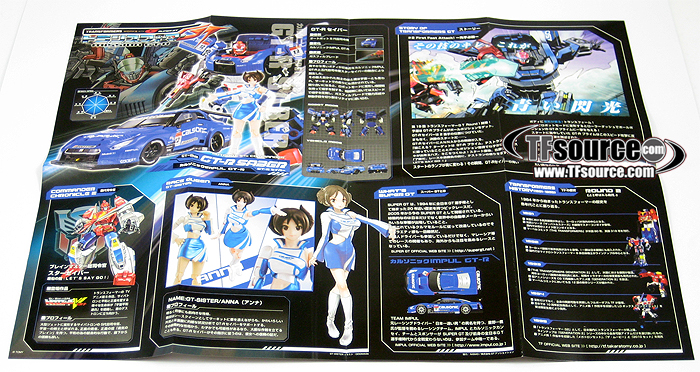 ...but these cost a lot of bucks 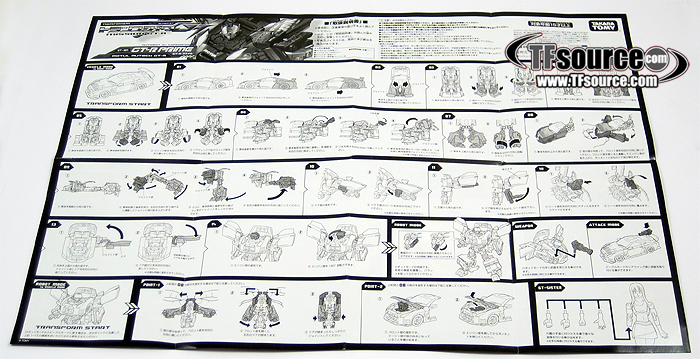 I do confess to needing these at one point

The paperwork for these toys is as crowded and busy as the packaging is, with GT-R Prime’s showing his and the car’s bio and technical details, artwork for the robot and Misaki, some info on the original Convoy (Optimus Prime) and a run-down of Autobot leaders called “Round 1” from Convoy to Dai Atlas. Saber’s paperwork is much the same but features “Round 2” delving into Battlestars and Generation 2 Primes and info on Star Saber from Victory. Both characters have a tech-spec diagram in the top left corner of their sheet also. As you’d expect, the artwork is just lovely. The instructions for each toy are printed on the rear. 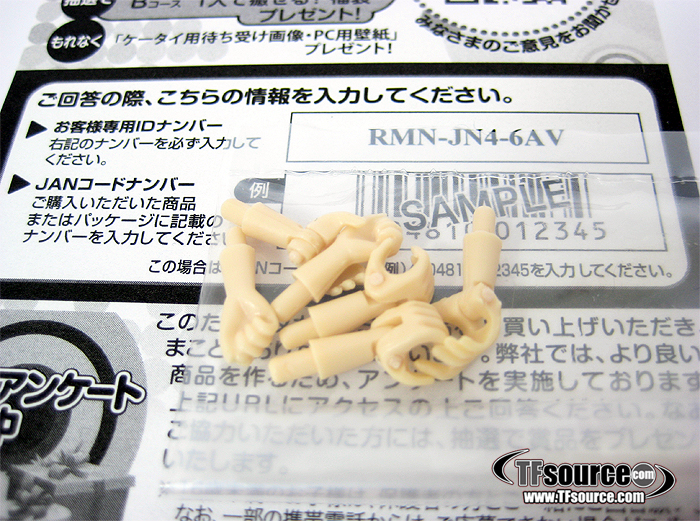 4 pairs of hands are better than one

The little baggy seen here contains 3 extra pairs of hands for posing the GT Sister figurine, including one that helps the little ladies hold the hand-weapons packed with the Transformer. How else are you going to create the dream pit-stop?

The Transformers GT characters do have a one-shot manga comic that features Prime, Maximus, Saber, Megatron, their GT Sisters and a character called Safety Prime. You can read that comic and its translation here at the Allspark, written and illustrated by Naoto Tsushima. It’s clearly very much pitched as a battle that takes place on the circuit, and the relationship between the GT Sisters and the robots is considerably less creepy than it was in Kiss Players. Definitely worth a look and a read. It also appears to support the theory that there are not currently any plans to expand the line beyond the four GT-Rs featured, but I’d love it if they did.

So if this whole article hasn’t been enough of a tease, I’ll leave you with one picture of the Transformers GT Prime and Saber out of packaging as a preview of next week’s Part 2 where we put the toys themselves through their paces… 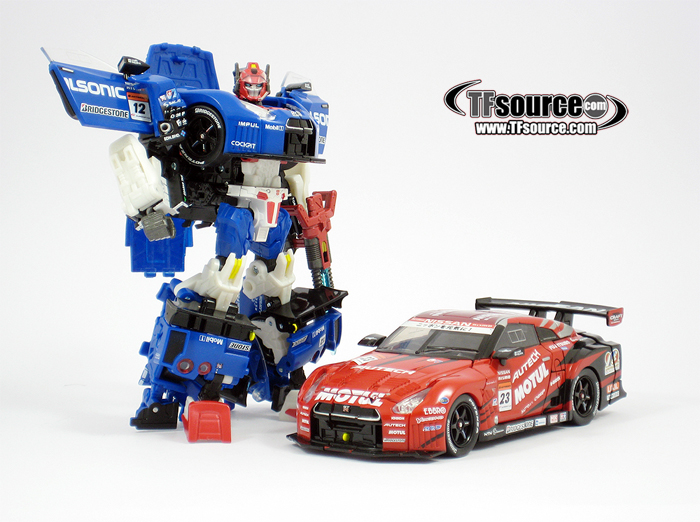