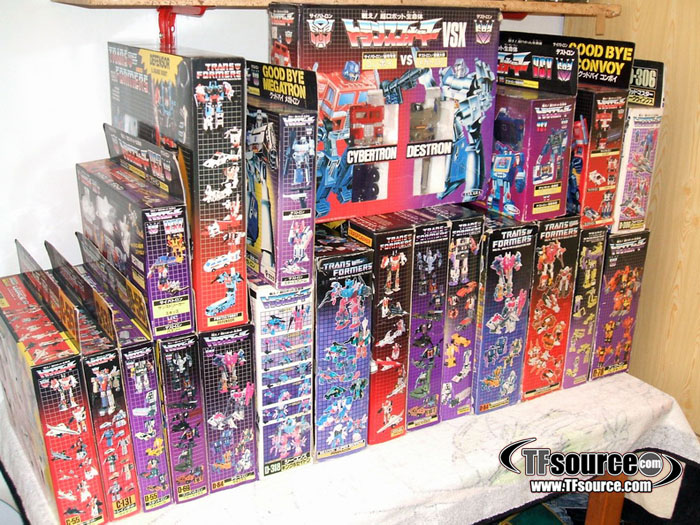 By definition, a giftset should be something that brings happiness. Not just one Transformer, but sometimes five or six, all of which interact with each other to create something more than the sum of their parts, expecially in the case of the combiner sets. Add in a reassuringly large box covered in artwork, a shedload of accessories, and a healthy dose of awe for any child that watched a Transformers cartoon containing one of these giants, and you have a recipe for success. Devastator, Superion, Menasor, Defensor, Computron, Predaking…these are all legendary names in the Transformers universe.

Last week we looked at some of the more obscure members of the global combiner giftset family, odd packaging variants and rare foreign versions with differently presented accessories for example. This week we close up this short look at the Transformers combiner giftset by featuring some of the more well-known and highly sought-after sets from Generation 1 in the US and Japan. 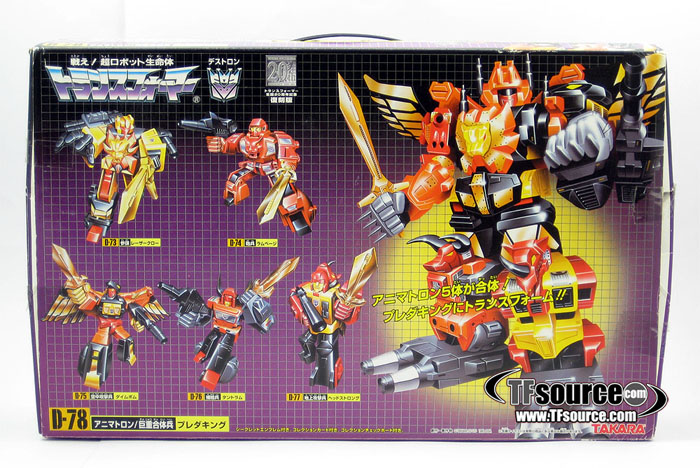 Before the 20th anniversary Takara reissue and the Takara Tomy Transformers 2010 reissue, the sight of a vintage Japanese D-78 Predaking in its original window-less carry-case giftset packaging would have stopped any Transformers collector in their tracks. This was a major collection piece worthy of great attention, respect and a whole lot to appreciate. Japan was the only country known to have received this toy as a giftset, so the Predaking artwork and collective set were exclusive to Japan. The toy was not released in many mainland European countries or the UK (Italy had it), so it was always at the top of wants lists and commanded massive coinage.

Some collectors feel sad that reissues have diminished the awe and prestige that surrounded some original exclusive Transformers such as the Predaking giftset, and that originals have been significantly devalued. Let’s face it, anyone can score a Predaking giftset of some description tomorrow if they wanted, and it certainly wouldn’t cost them $800! On the other hand, as with the new Fortress Maximus Encore reissue, isn’t it nice that so many collectors can now appreciate a perfect and clean version of this astounding toy in their collection without forcing their family to starve for a month? 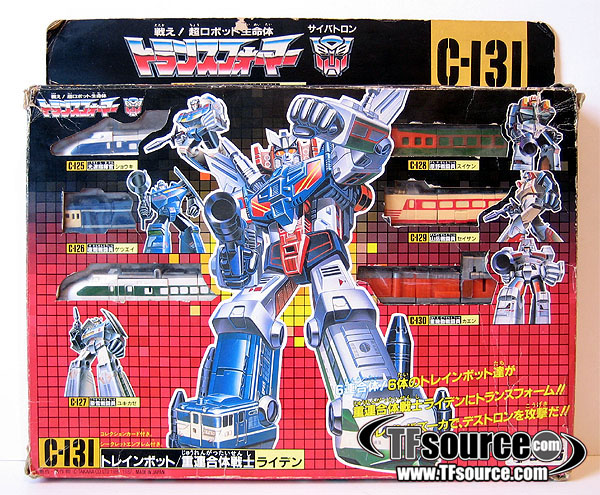 Another Japanese exclusive giftset – and toy – that remains hugely popular to this day is the C-131 Japanese Headmasters Raiden giftset, made up of the 6 Trainbots “Shouki”, “Getsuei”, “Yukikaze”, “Suiken”, “Seizan” and “Kaen”. Originally Japanese Diaclone toys, the 1987 Headmasters release of these toys featured additional parts to make the combiner more sturdy, and of course a stunning giftset box with combiner artwork bang in the middle of it.

I generally prefer pre-Transformers versions of any mould, but it has to be said that the improvements Takara made to the Raiden toys for Headmasters release were essential, allowing a much more sturdy and durable combination of the six trains into Raiden, most notably through the addition of the red chest piece and red back piece, both exclusive to the Transformers version. The Trainbots were released again as part of the 90s Japanese Zone series, but only in single boxes, not as a giftset. 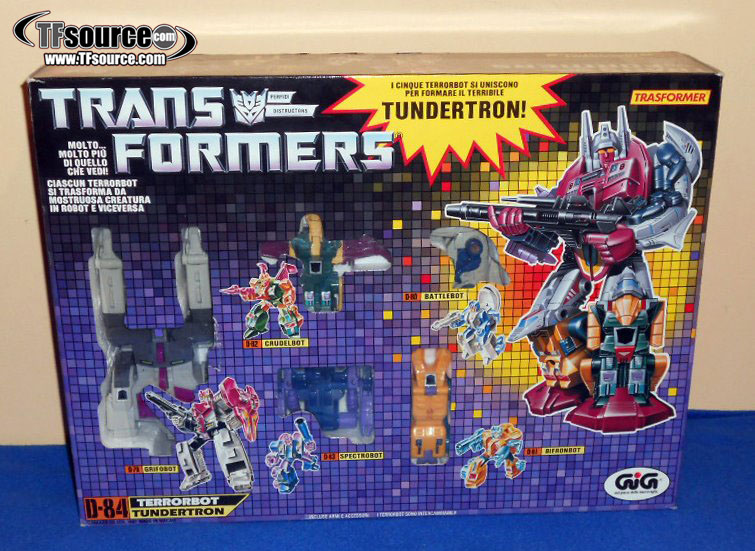 Next up it’s a really odd one, but still hugely sought-after, the GiG Trasformer release of Abominus called “Tundertron” and apparently a “Terrorbot”. This is a classic hybrid style release, blending the Japanese D-79 to D-84 designations and giftset nature of the Terrorcons but presenting it in an overall Hasbro-style package, making it about as close to an official US Transformers Abominus giftset as you can get, but still badged as “Trasformer”. That’s the beauty of giftsets, I have absolutely no love for Terrorcons as toys, or Abominus itself, but the giftset for this combiner is really stunning and something I imagine one would display proudly.  Not an easy set to get by any means though, and definitely not cheap. 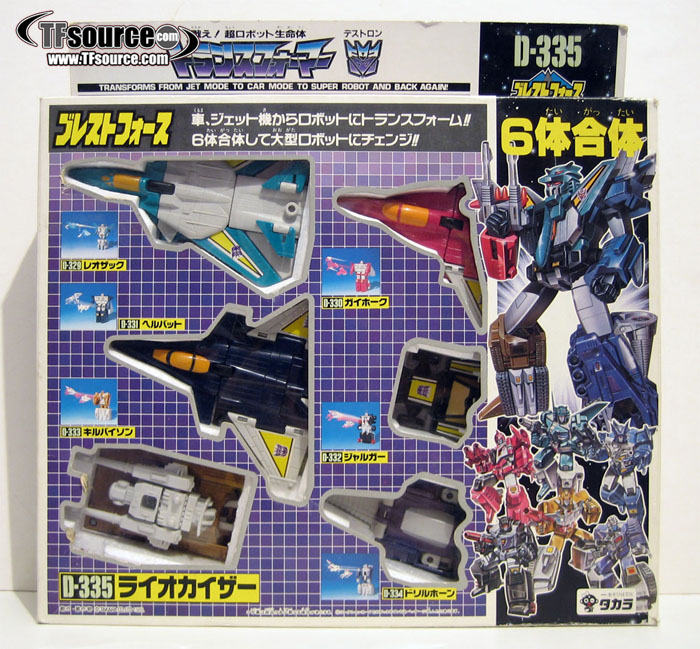 No introduction needed here, the Japanese exclusive and hideously expensive D-335 Liokaiser giftset that has almost become a symbol of collection status, such is the demand and rocketing price for a nice set. Hailing from 1989’s Japanese Transformers Victory anime, they were certainly not always as popular or expensive as they are now, not by a long shot. I sold the one pictured here on eBay a few years ago for not much more than $400, now they are in the 4-figure bracket. It’s not that easy to find a perfect one however, there are gold plastic crumbling issues after all. 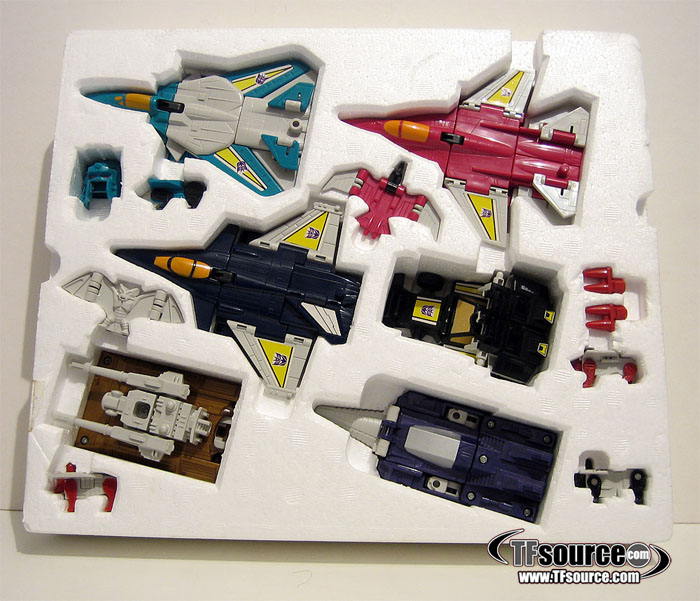 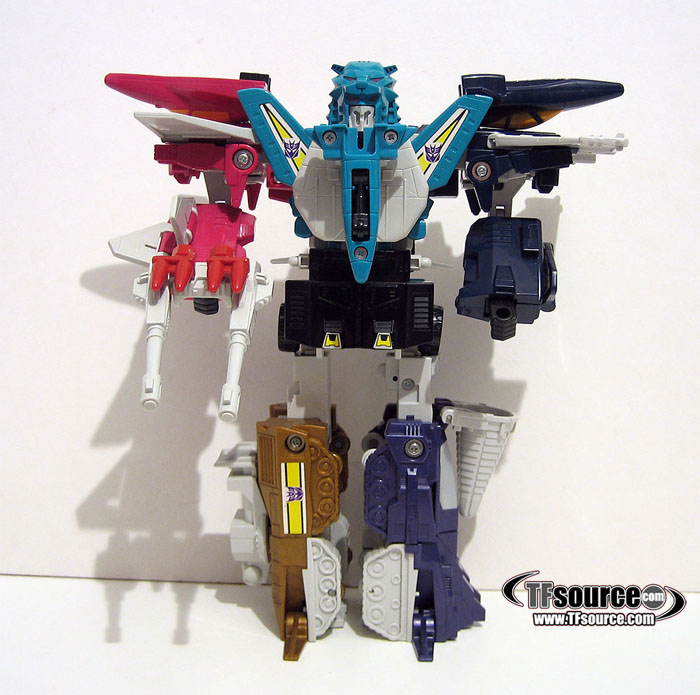 Weird to see a combiner without footplates

The Breastforce combiner is related to the European Rescue Force figures but features 2 extra members and a Decepticon (Destron) colour scheme. Leozack, Drillhorn, Gaihawk (Guyhawk), Killbison, Hellbat and Jargua (Jallguar) combine to form Liokaiser, who is actually a very well-proportioned and nice-looking combiner with a terrific head sculpt, not always a given with these giftset giants. He’s also not a giant by any means. The toys all have the Breastmaster gimmick. 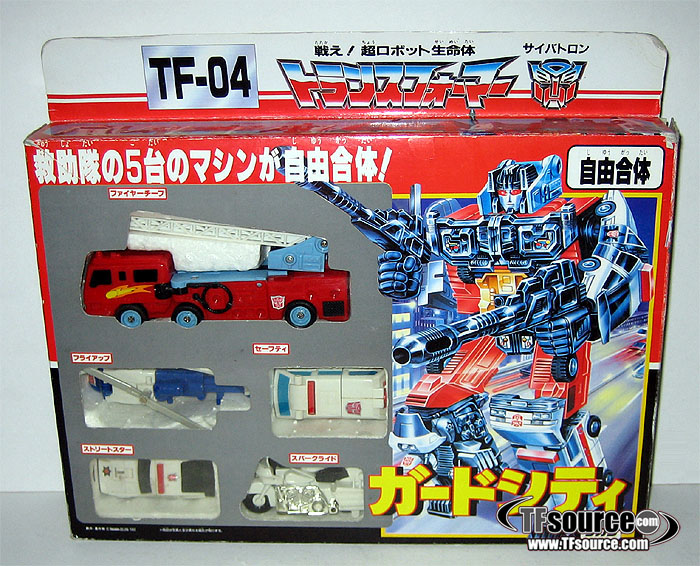 Last stop on our Japanese tour is actually one of the last combiner giftsets released in G1, the exclusive Operation Combination repaint of Defensor known as Guard City. This is another item that has rocketed in value and popularity, and again it’s a very attractive set which I used to own myself, and was really very impressed with. Some colours are not that different from Defensor, but Fly-Up (Blades) and Fire Chief (Hot Spot) really are lovely. Those who have been around a long time swear blind that this giftset is nowhere near as rare as modern day Japanese TF collectors make out, but that hasn’t stopped it becoming one of the 4-figure clan. My personal feeling is that I’ve seen enough of these for sale each year to dispel the mega-rare myth, instead I would say Battle Gaea is the rarer set.

To wrap up, let’s go back to where we started our giftset gallery, in the US with Hasbro’s G1 Transformers giftsets. It always surprises me how such popular, well-known and easy-to-find toys can be so rare in giftset form…and not just slightly rare, but holy grail rare to those who collect only MISB or beautiful unused specimens. 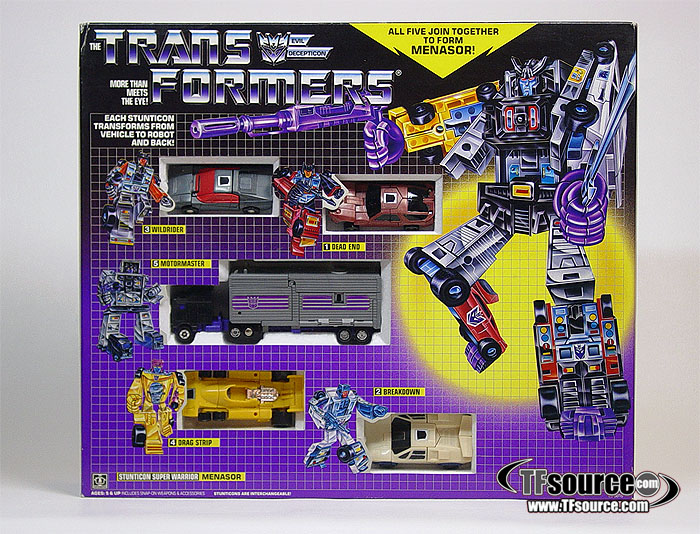 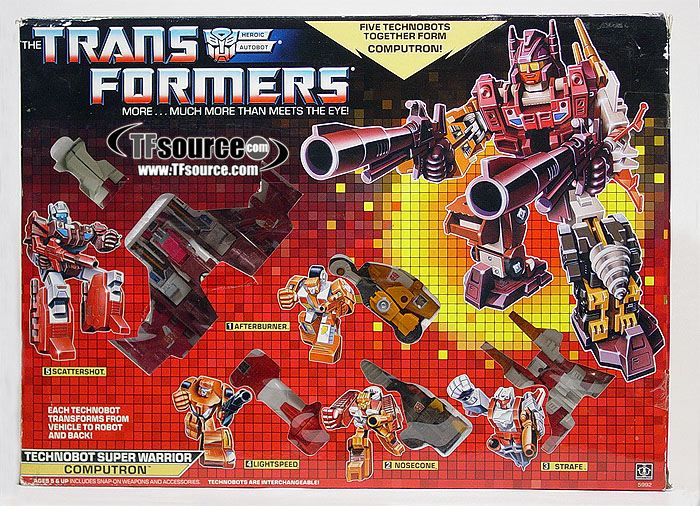 The US Defensor may have laid a strong claim to the rarity crown, but US (non-KO) Computron, Menasor and Piranacon giftsets are, in their own right, significantly difficult items to find in high grade condition. It shouldn’t be that much of a surprise seeing as how parents would much rather have bought individual special team bots for their kids due to space and cost…but for special occasions like Christmas or birthdays, would a giftset not have fulfilled its ultimate purpose and become truly deserving of its name? 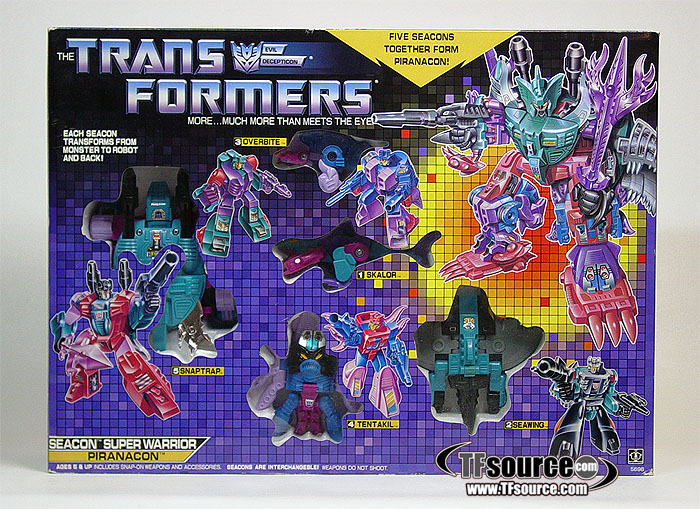 Many kind thanks to Curt from TFSource, Marco Salerno and Matteo Pigliucci for excellent photographic contributions.