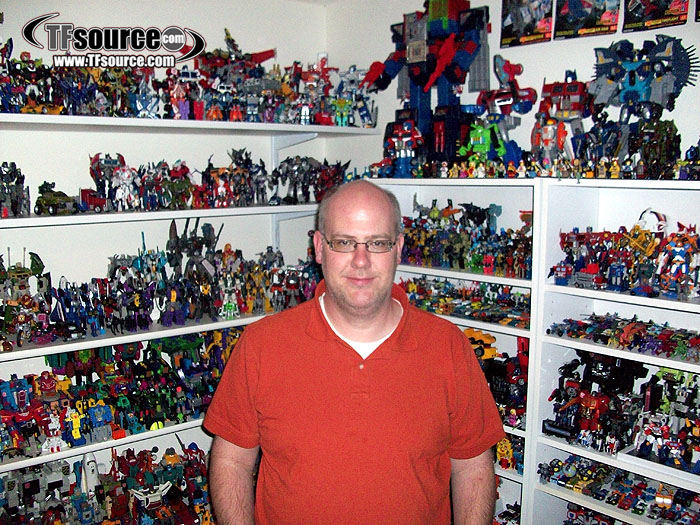 We’ve occasionally interviewed collectors with very extreme views and collecting habits, but individuals such as those can sometimes represent the minority. This month we spotlight a proud family man with strong faith who is a self-confessed sports fan, gamer, and blogger. He also has a healthy obsession with Transformers which has led to him being interviewed by a local television channel and featured online. Other than that and his mega collection, he’s not that different to you and I, and that gives his insight and views on the Transformers collecting community a very relevant spin. 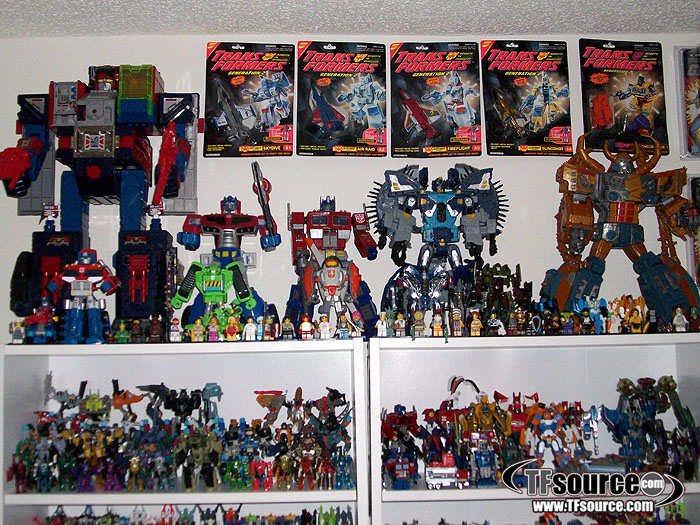 A city, 2 planets and a load of Primes. Nice shelf!

My name is Colbey Hopper, but I’m known simply as “Flywheels” online.  I collect G1, G2, Machine Wars, Classics/Generations and Transformers Prime.  I’m also an avid Mini-Con/Micron and Spychanger collector.  Outside of Transformers I also have a small interest in other transforming mech like Machine Robo and some of Takara’s other robot lines. 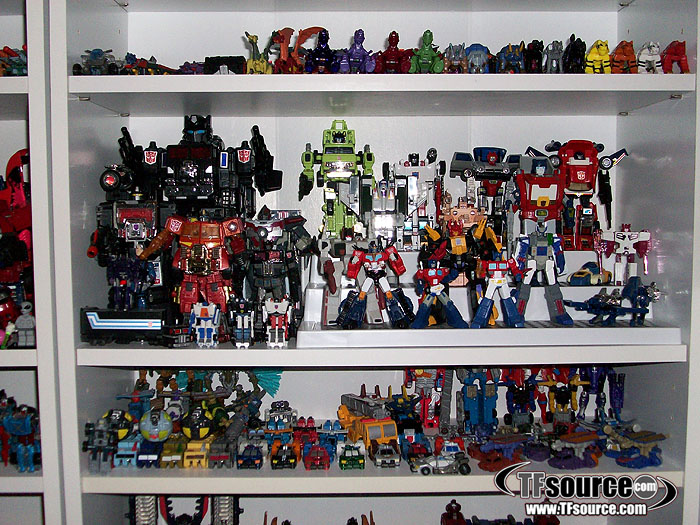 10 years ago I was making my 2nd trip to Fort Wayne, Indiana for the annual Transformers convention (OTFCC at the time).  The Robots in Disguise line was in full force and so many fans were happy that vehicle based Transformers had returned to store shelves.  At the time I never would have guessed that the brand would be as popular now as it is.  All the sudden it’s cool to slap an Autobot or Decepticon symbol on your car or go out to dinner wearing your favorite Transformers t-shirt.  This is due in large part to the commercial success of the live action movies.  Say what you will about the movies, they have put the brand in the mainstream spotlight.  From a collecting perspective this increased attention has brought in “new” collectors which most of us see as competition.  Prices on the secondary market of just about anything Transformers have gone up making it a little bit harder to reach some of my personal collecting goals. 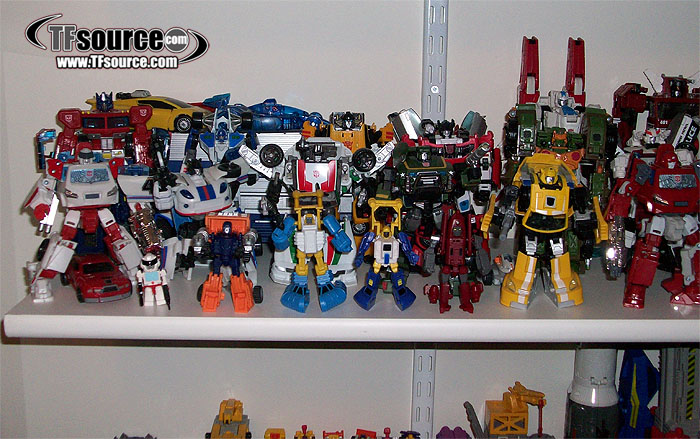 I wish I was wrong, but I don’t see prices on the secondary market coming down anytime soon…especially on the vintage G1 stuff.  The funny thing about this collecting community is that you can take a quick look at completed Transformer auctions on eBay and one would never know we are still in the middle of a recession!  G1 Reissues don’t seem to be slowing down so hopefully this will make it a little easier to find (and on the wallet!) those pieces I need to round out my collection.  Like with any other hobby there continues to be an introduction of new blood that will continue to fuel the collecting fire.  BotCon has grown by huge proportions since its inception and appears to be continuing to grow.  The official Transformers Collector’s Club is growing in numbers and this allows them to do more with the club and offer new things to its members.  I don’t think the live action movies are anywhere close to being done either so I don’t see Transformers slowing down anytime soon.  With the fanbase that has been installed from the beginning I see Transformers going strong no matter what. 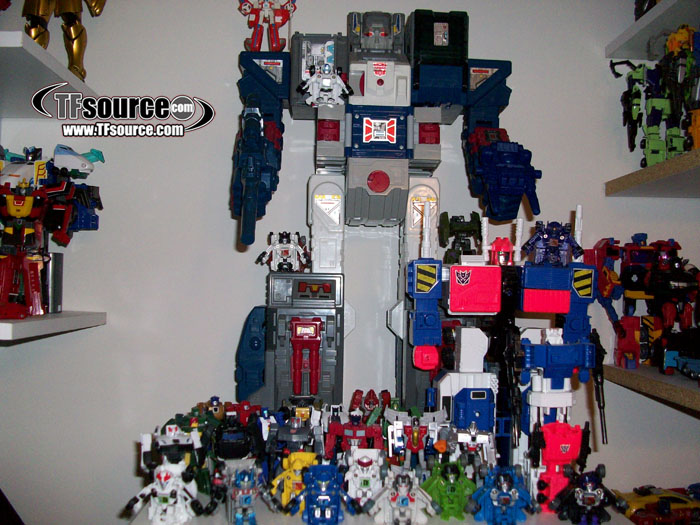 The big and the small

Shortly after getting online for the first time and discovering eBay I was immediately overwhelmed by the sheer amount of Transformers being sold online.  Growing up I didn’t really stick with the entire G1 line until the end as at some point I became “too cool” to play with toys.  I missed out on the last 2-3 years of the original G1 figures so when I was brought back into the collecting community there was a lot I needed to learn about and brush up the knowledge of the toys I did have.  I started a very crude (by today’s standards) G1 database for the toys – both U.S. and European & Japanese releases.  After its completion I think I submitted it to several search engines, but I never really thought much about it.  Some time after the database had been online I was contacted by a guy in Malaysia asking me for help IDing a certain Transformers figure he had come across.  Keep in mind that this was before digital cameras were so prevalent so he didn’t have a picture for me.  He described the figure as being a blue and silver helicopter.  At first I thought of Cop-Tur from Gobots! 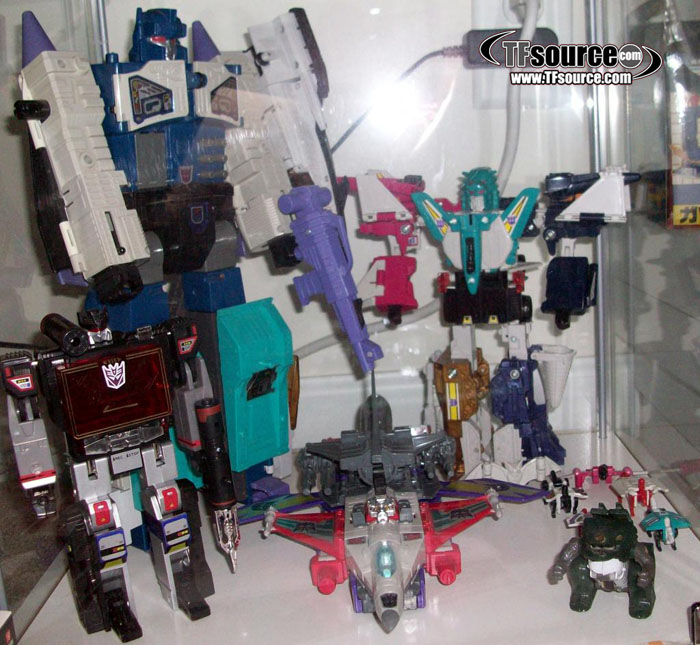 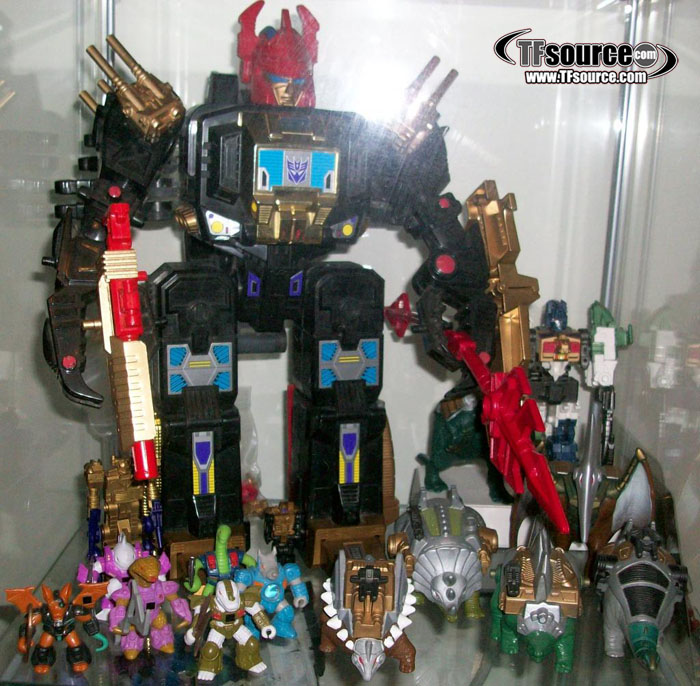 Then he went on to say the helicopter opened up and a small blue figure was inside.  Now at this time I was very much into buying anything and everything Pretenders since I originally missed out on those toys (plus they were cheap at the time because nobody else seemed to collect them!).  This toy he was describing sounded very much like the G1 Ultra Pretender Crossblades, but the colors were off.  I asked him if the helicopter transformed into a bulky human and he said that it had a silver robot looking head/face.  That’s when I put two and two together and realized he had the Japanese exclusive Crossformer, Blue Bacchus.  To make things better he also had the box and a snow white styrofoam insert.  Stickers were unapplied and still sealed in the little baggie w/ the instructions and catalog.  I had only seen this toy pictured in catalog scans online, but I knew I wanted it.  After helping ID the toy for this guy he asked me if I was interested in buying.  Of course I said yes.  He was asking $35.  Yes, $35.  You read that right.  Well of course I said yes and quickly made my way to the post office to buy an international money order (remember those?).  After about 2 weeks of waiting the parcel finally arrived and I was the proud new owner of a cherry MIB Blue Bacchus.  To this day I’m really not sure how the guy found me online or why he even asked me for help.  A few years later when I saw what Blue Bacchus was selling on eBay for I sold mine for a pretty nice profit…although I kick myself now for doing so! 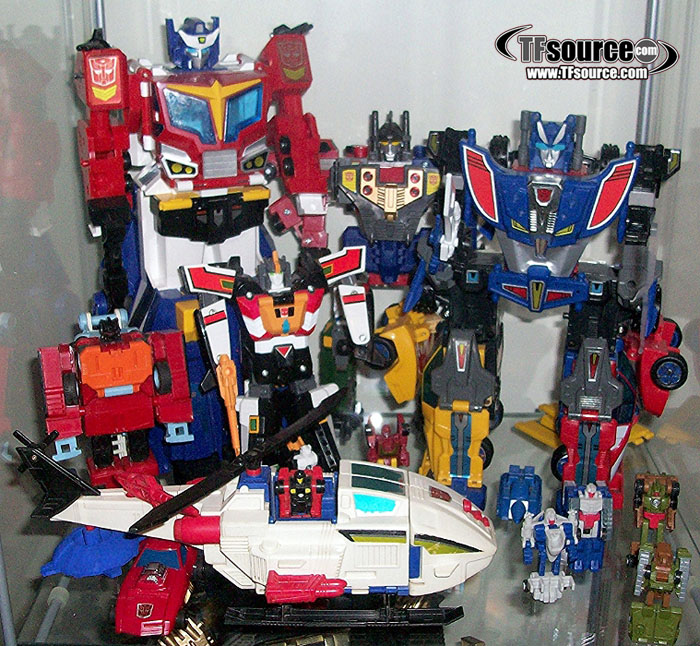 In these days and times nothing really surprises me anymore, but in the summer of 2000 I attended my first BotCon and I was blown away by some of the people I met that weekend.  I had only been collecting again for maybe 4 years and while I had amassed quite a bit I never knew there were other people out there as crazy and passionate about Transformers as me.  The icing on the cake that weekend though was walking into one of the side rooms at the Grand Wayne Center in Fort Wayne, IN and seeing in person the complete collection of the Hartman brothers.  To see that many packaged Transformers from all over the world in one place was truly a sight to behold.  Six years later I was surprised to see this same collection being pieced out and sold at BotCon. 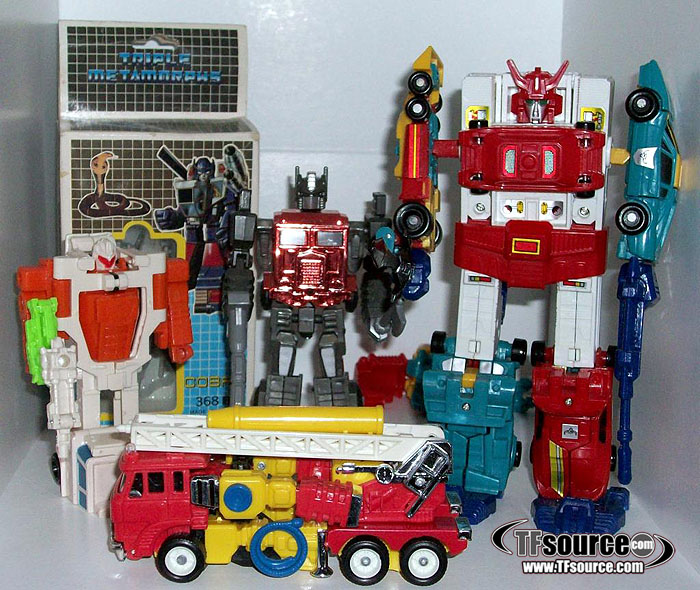 I should’ve known a question like this would be asked!  Only one?  Hmmm.  G1 Grimlock.  Sometime in 1985 my older brother and I were dragged car shopping with our parents.  In the lobby of the Chevrolet dealership was a entry box with forms to win several different prizes.  At the time I didn’t know my brother had filled out a card and placed it inside the box…with my name.  A few days later my dad got a call from the dealership informing him that I had won a $100 cash prize!  Now I don’t need to tell you how excited I felt as an 8 year old kid winning the “lottery”.  After picking up the prize money my dad took us to a store called Service Merchandise where I quickly sought out the toy department.  My dad made me split the money with brother since he entered me in the contest, but it was still OK as I walked away with my first Dinobot, Grimlock.  I also purchased Perceptor with what I had left over, but Grimlock was the prized purchase.  Flash forward 28 years and I still have my original Grimlock proudly on display in my collection. 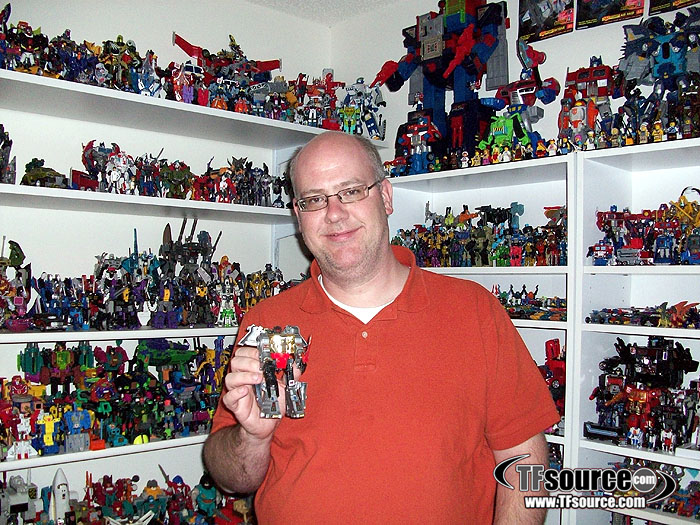 Childhood toys are the holiest of the holy

I try really hard not covet other people’s stuff, but if I could pluck one item out of somebody else’s collection I think that toy would have to be the Pretender Lander from Heroic Decepticon’s collection!  I know the toy is identical to the American Landmine version, but I love the Japanese packaging for the Pretenders and being a mail-away exclusive makes him that much more attractive.  Plus he’d look great on display with my other Japanese Pretenders.  Did I mention there were only 3,000 made? 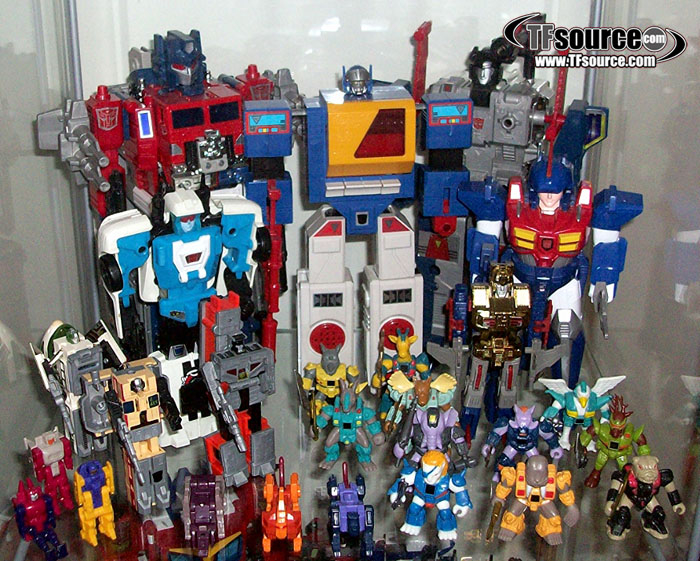 I would first advise new collectors to set a budget and a goal.  Times have changed a lot since I started collecting again – prices for vintage toys and even new toys are so much higher.  If you don’t give yourself some limits you can easily get in over your head.  Figure out what you like best and start there.  If you have a clear and defined goal and budget set for yourself I believe you’ll find the collecting journey will be more fun.  Another aspect I’d suggest to new collectors is to interact with the community.  Not all of us are so lucky to have fellow friends and collectors that live nearby, but find an online community and be active.  I’m sure that you’ll find some great people there and learn that there is so much more to Transformers than meets the eye! 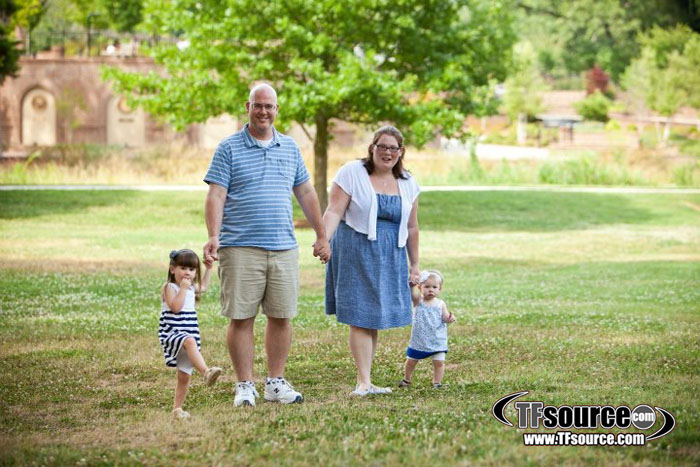 A grown-up collector...with 2 little ones to corrupt!

Many kind and gracious thanks to Colbey Hopper for words and photographs. You may wish to see more of Colbey’s writing at Random Toy Reviews.