Is It Conceivable? – Part 2 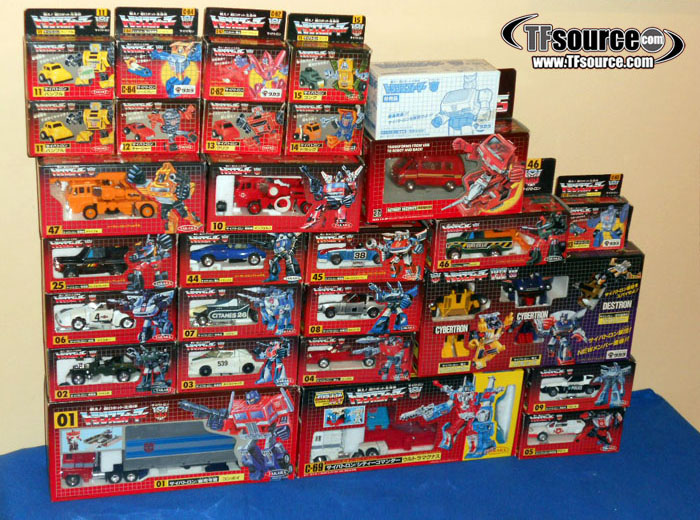 Japanese Transformers are not just an exotic flavour to be sampled by collectors who fancy adding a touch of spice to a normal G1 collection. Some Transformers enthusiasts actively try to complete the whole run of Takara G1 Transformers from start to finish. In addition, a few hardy souls even take up the challenge of finding all of these foreign figures in pristine condition. But how likely is it that someone could have the entire selection of early G1, Headmasters, Masterforce, Victory, Zone, Battlestars and Operation Combination in perfect condition?

I asked a number of well-known experts in their field of Transformers collecting how conceivable they felt certain lofty goals were to achieve in order to gauge just how much of a task it would be to complete a specific type of collection. This week, Brandon Yap, Marco Salerno, Eric Hall and HighPrime were quizzed on goals within Japanese G1 Transformers. We’ve already looked at AFA MISB G1 Transformers, and we will also be looking at minibots, pre-Transformers and prototypes. Our experts’ answers are as fascinating and insightful as you would expect from such esteemed gentlemen. 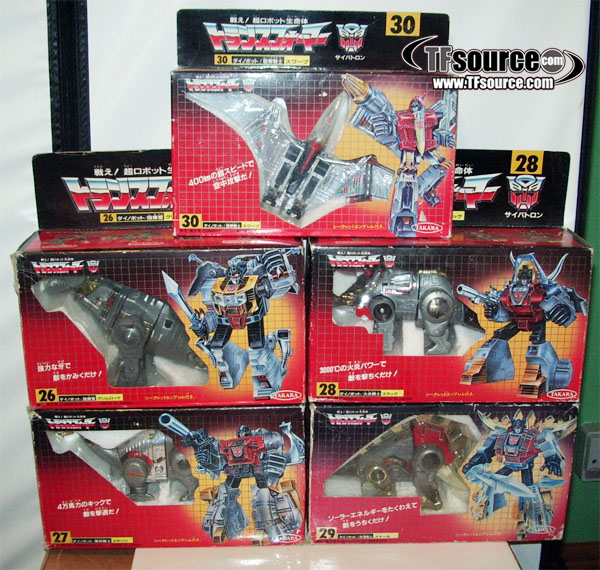 “Is it conceivable that someone could have a full run of every single G1 Japanese Transformer MISB?”

The answers are surprisingly positive. Brandon “Heroic Decepticon” Yap says “Since not many things in this life can (or should) be spoken of in absolutes (except death and taxes), I’d say ‘yes, it’s conceivable that someone could have a full run of every single G1 Japanese Transformer MISB'”. Marco Salerno supports this attitude, saying “Of course it is conceivable, it is possible to purchase anything that has a price attached to it, all you need is money! For a ‘normal’ collector, the high selling price of certain items is often the main obstacle to get close to the completion of his own collection. Who would not like to have a full collection of rare and factory sealed items? Obviously every collector would like to have one!”.

It’s not taken long to raise the issue of money again when it comes to discussing the feasibility of amassing a complete collection of desirable toys in great condition. Marco adds weight to the significance of this seemingly obvious point by saying “If you are rich, everything becomes easier and nothing is impossible. Price is no more an obstacle, you need only to choose how you can find what you want; you can choose to find the items you want by yourself, travelling, touching with your hands or entering some big store in Japan before the opening-time, by paying in advance a quote just to have priority on purchasing fresh new and rare in-stock vintage items… or if you haven’t got time to travel, you can submit your wish list directly to some well-known and powerful dealer or seller; trust me, usually when you have your wallet full of money you don’t need to spend time to find good contacts, there will be lots of sellers that will contact you offering fantastic items that normally you will never see on mainstream internet channels. Some rich collectors are even supported directly by employees from intermediary sites specializing in e-commerce between Japan and the rest of the world, so you can understand there is virtually no obstacle between you and your goal when you have a good financial power”. 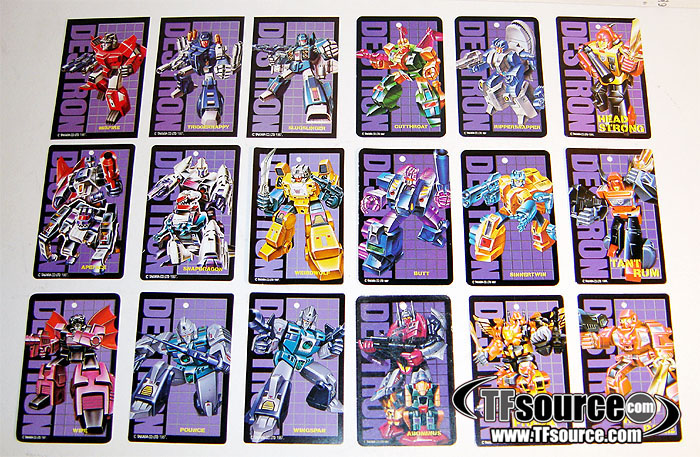 But if funds were the only obstacle, surely we’d have seen a few sealed Japanese G1 collections by now. There must be more to it than just cost, as Brandon explains the enormity of the task at hand: “I’d say that it is highly improbable for someone to have every single G1 Japanese Transformer MISB – I’m interpreting the words “every single” in the broadest sense, meaning I am thinking of all ‘numbered’ Japanese releases (i.e. 01 to 49; C-50 to C-376; and D-50 to D-341), all ‘un-numbered’ Japanese releases (i.e. Goodbye Convoy, Goodbye Megatron, VSX, VSY, VSZ etc) and mail-away exclusives (i.e. Ratchet in various box types, Omnibots, C-200, Gnaw, Repug, etc). Why?

“The first and most obvious reason is the general rarity of the majority of Japanese pieces, likely due to relatively smaller production runs compared with US releases. Second-hand pieces are often more likely than not opened by their original (childhood) owner. Over the years, I realised that it is only fortuitous ‘factory finds’ or ‘case finds’ that result in an injection of MISB Japanese TFs into the market – factory finds, are of course few and far between and typically of 1-3 different characters, but (to my knowledge) never has there been a find of the entire range of characters spanning the Japanese TF line.” 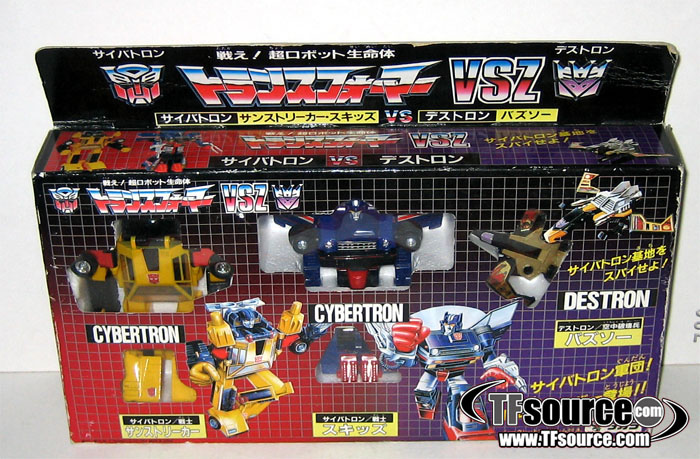 Eric Hall echoes Brandon’s thoughts: “I know that personally I have all but 37 or so MISB/boxed/carded Japanese G1 Transformers.  Out of over 200 boxed that I have, only 20 or so are sealed. Given the rarity of most of the Japanese Transformers it is a difficult task to just find the toys in any good condition. When you put the Japanese exclusives such as Artifre, Stepper, the Heads (i.e. Shuffler) and the rest, your task gets astronomically harder. Add in the  sets such as the VS sets (VSX, VSY, VSZ)…in the 17 years I have been collecting I may have seen a few that are MIB, but NONE that have been sealed.” 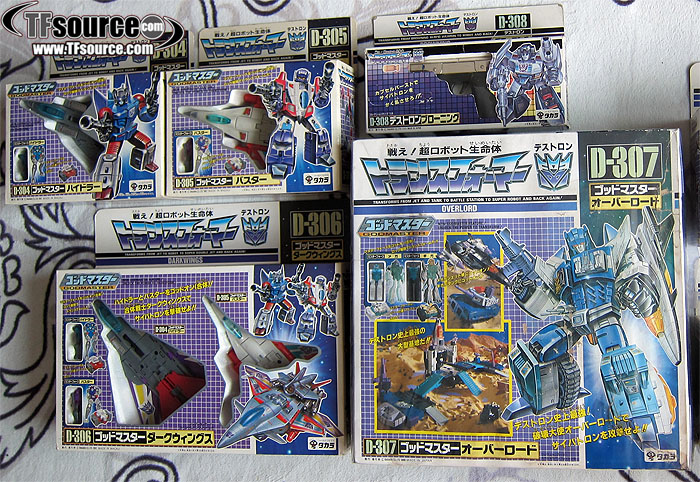 Apparently finding a sealed toy is no guarantee of preserved condition as Brandon highlights: “Even if a piece was bought MISB, there is a high likelihood that a collector will open it to inspect its contents making it no longer MISB. I say this because a good number of Japanese TFs do not have clear plastic windows where a collector can view the toy, for example Fortress Maximus, Grand Maximus, Victory Saber, Greatshot, Big Powered, Sky Hyper, Rabbicrater, Overlord, Black Zarak or Metrotitan. Few collectors would drop large chunks of money for the above pieces on the faith of the seller saying it’s MISB, without opening the box to inspect that the contents and paperwork are all there, complete and unbroken. My personal anecdote back in 1999 is this: I bought a MISB C-328: Victory Saber giftset for US$400 and sliced open the tape on the spot to inspect its contents (don’t want to be buying a box of bricks). Ta-da, one less MISB Japanese TF. Today C-328 is a circa US$1000 TF, all the more reason to inspect it if bought ‘MISB’.”

HighPrime also makes reference to the dubious nature of Japanese MISB items when answering our question this week: “I’m of the mind that anything is possible – Short answer is ‘yes it is completely attainable’.  It gets tricky from there,  however.  Japanese store owners were notorious for opening up boxes for customers. Double-taping is rampant in the market, to boot. I’ve never seen this anywhere else but in Japan (I have limited visibility into other markets, so please take that with a grain of salt).  Other components of the equation you are all fully versed on (eBay, trade shows, scalpers etc)”. 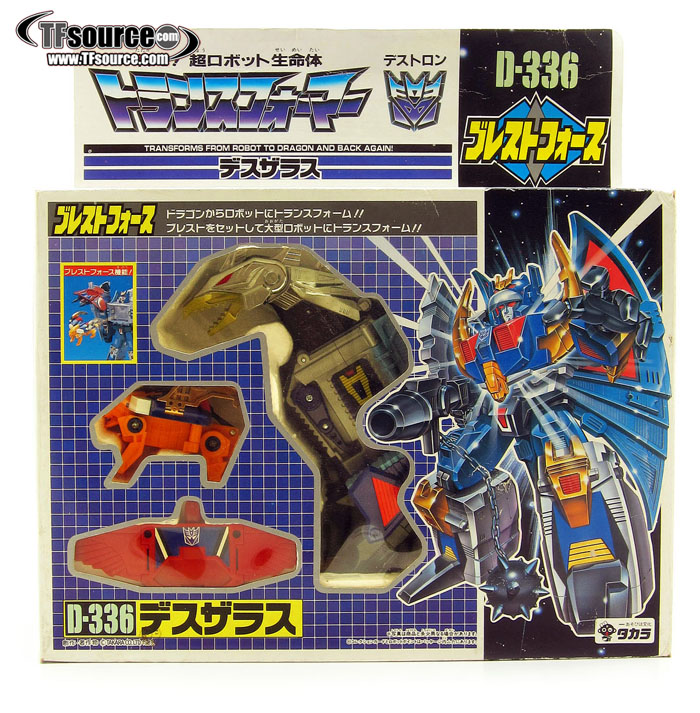 Interestingly, Marco feels that it is not quite as insurmountable a task as the others have suggested, but once again mentions the obstacle of cost: “Although some Japanese Transformers are not at all easy to find in factory sealed condition (it is easier to find opened specimens in unused condition), I think there are many wealthy collectors that have achieved this goal. Japanese transformers are not rare to find in Japanese or Hong Kong stores. If you have a high salary or you are from a wealthy family, you can in a few months find every Japanese Transformer ever made in MISB condition, including exclusive giftsets and rare items like Reflector, Trailbreaker or Megatron.”

“Eric Lim is, without any doubt, the only collector I know close enough to have a 98% complete Japanese G1 collection in factory sealed/unused condition; his will and taste in this hobby is great and he is always hunting for upgrades. Actually I consider him the best G1 Japanese collector around for quantity and quality of pieces he owns. In ten years, I have seen on sale at least one sealed specimen for each Japanese G1 Transformer on various sites, including Yahoo Japan, Ebay, fan forums, private auction sites and private internet sites. Of course, prices are increasing year after year, it seems vintage Japanese G1 toys are getting popular especially in China, where some guy among the “new millionaires” wave is ready to pay whatever amount necessary to get the best specimen on market. Chinese collectors have become very active since 2005/2006, and they actually are the main customers for Japanese toy stores”. 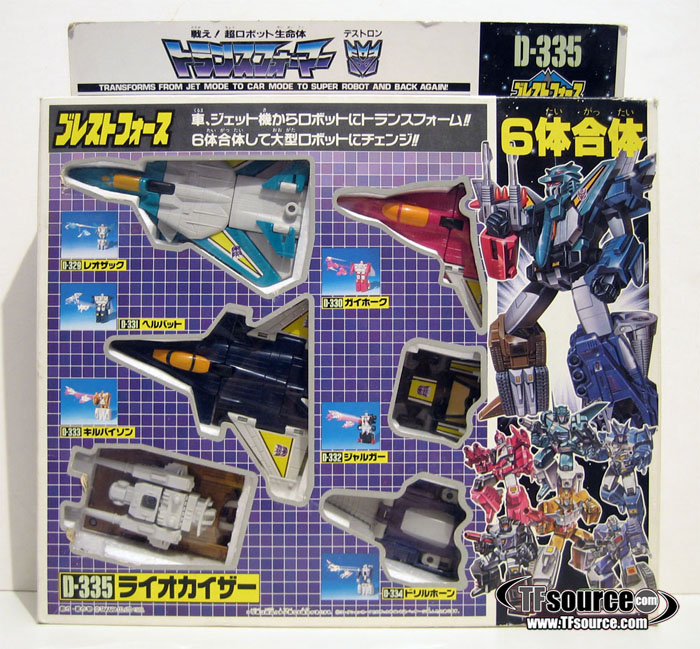 With any form of ‘serious’ or goal-driven collecting, there are sacrifices and priorities, significant changes to the way in which collectors approach their hobby, and the prominence of their hobby in their life in general. This is something that must be factored into any feasibility study. So putting aside for a moment the difficulty of the task, HighPrime looks deeper and considers the purpose and consequences of successfully achieving the goal: “Once one decides on the goal, they’ll need to flesh out the course of action. Here are some questions to consider, but by no means is this list all inclusive: 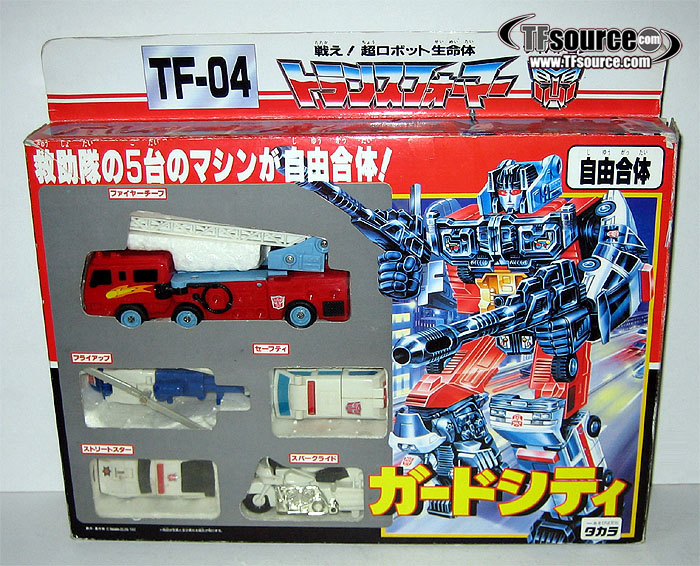 “The above is enough to discourage anyone lacking a steely mindset.  Here’s a few more that should give even the most ardent collector pause:

· Am I willing to live on ramen noodles for X number of years (Japan TFs are expensive.. crazy expensive..)?
· Will my significant other support me?
· Will I have accomplished something worthwhile in my life?

I think that last question is a gut check.  I have found over the years that collecting a full run, or even in general, has left me feeling ultimately empty. Like I didn’t really accomplish anything.  The hunt was exciting (mostly), but then once you have that hard to obtain figure or a complete collection, what else is left? I’ve come to the realization that my time would have been better spent learning a new language, or an instrument, etc.  Which is exactly what I’m doing with myself these days – learning to speak Polish, Chinese, playing the guitar, and continuing to expand my photography skills.  I think there’ll always be a place for Transformers in my life, but it’s mostly relegated to some photography and collecting a few odds and ends that still tickle me.  With age comes wisdom… and moderation”. 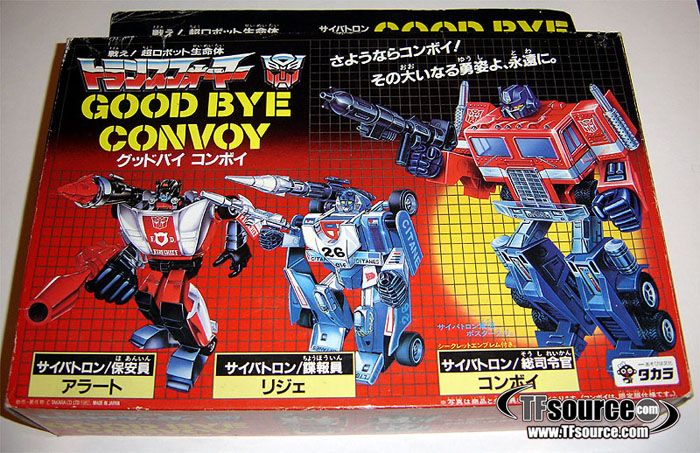 Taking all of the above into account; the rarity, the authenticity of sealed specimens, the purpose, the financial and personal cost, where does that leave us and the possibility of owning every single Japanese TF MISB? Is it conceivable? The final words go to Eric, and then Brandon: “The answer is ‘Yes’ anything is possible; HIGHLY improbable but possible, but the road to this goal is a very very tough one.  To get the MISB Japanese G1 holy grails as they have been called from the collectors that own them would be a fiscal nightmare. For example, a MIB Artfire has sold for $2000 plus.  If one adds in the MISB factor, the price would be $3000 plus.”

“In summary, while it is not absolutely inconceivable for someone out there to have every single G1 Japanese Transformer MISB, I’d be very surprised if such a collection existed – surprised, but also delighted. Can I shake this person’s hand?” 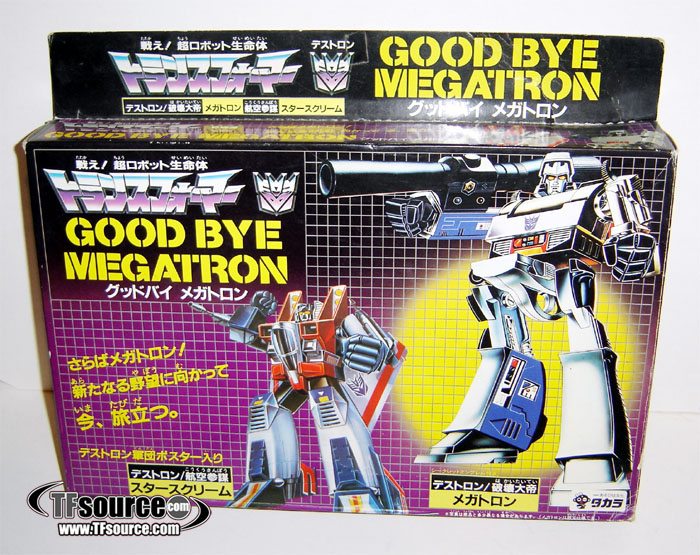 Immense thanks to Brandon Yap, Marco Salerno, HighPrime and Eric Hall for their time, insight & contributions and pictures.

Is It Conceivable? – Part 2