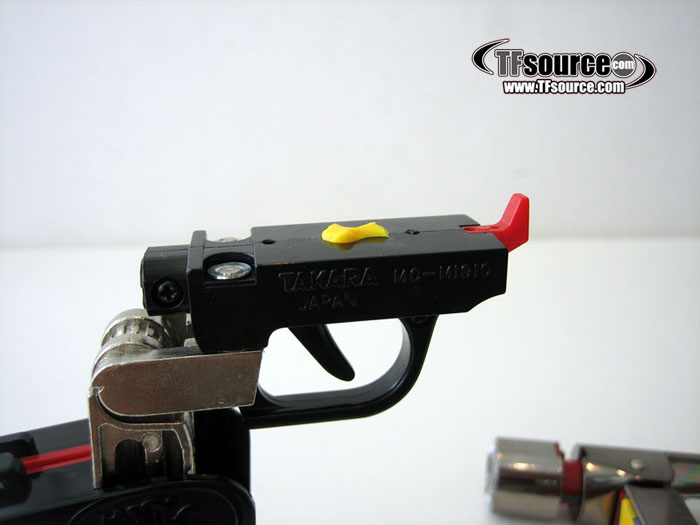 Collectors of vintage Transformers and pre-Transformers regularly deal with items that are nearly 30 years old, most of which are pre-owned, loved and abused, so they can be trusted to employ the required care and attention in order to preserve these collector’s items of value and beauty. That is, until very recently, when stories of broken vintage pre-TFs and rare G1 in the hands of long-time experienced collectors started to increase.

As plastic that was of questionable quality to begin with ages, the chances of damaging vintage G1 and pre-TFs increases with every year of life they endure in our collections. The brittleness of gold plastic used in toys like Black Zarak is well known, but a recent spate of blue plastic tragedies has inspired me to write about my own personal ham-fisted episodes with vintage rarities and even newer toys. The question is, was it the manufacturer’s fault, or mine? 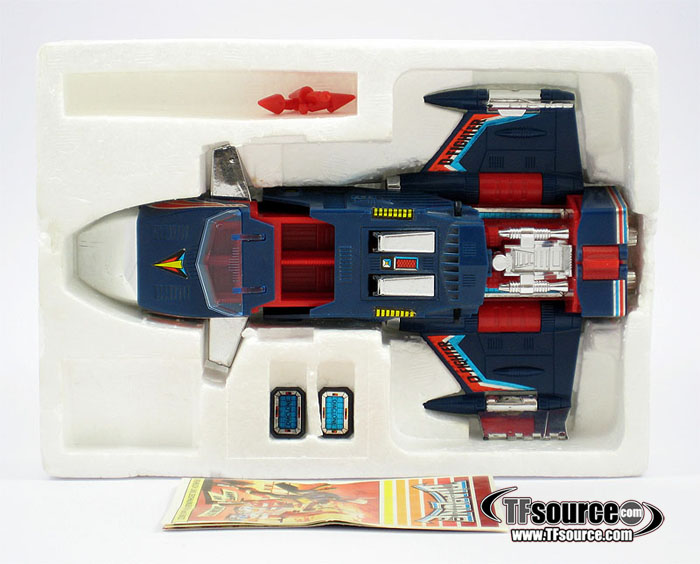 No small joints, no real rotating parts, what's to break?

The Joustra Diaclone Diatrain was one of the last pieces I needed for my year 1 collection and it took the better part of a year to track one down worth purchasing. It’s not a rare mould, the toy can be bought as part of the UK Grandstand Convertors line, the Italian GiG Diaclone line and the US Takara Kronoform line, but its rarest in Joustra packaging. The toy seems incredibly simple to work with, not a complex transformation, plus it looked sturdy and bulky too. 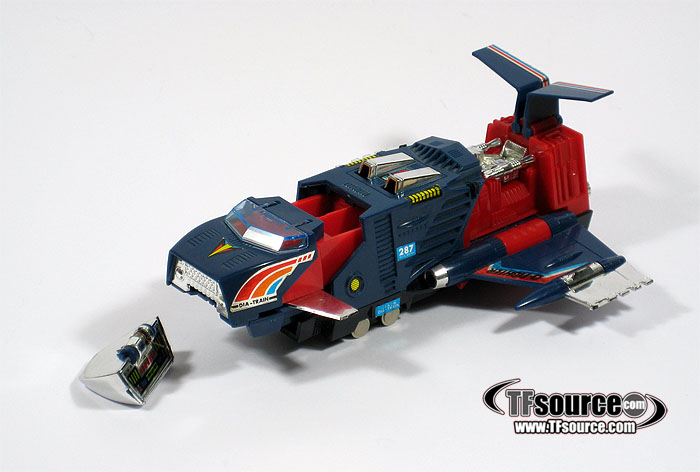 Moments after I had taken it out of the styro having opened the shipping box and tried to transform it, the chrome nosecone was in my hand displaying an angry blue plastic break. This was around the same time that one of my friends had broken his blue Browning, and another had seen to the blue innards of a pre-TF black Megatron and part of a Diaclone Thundercracker. It’s well known amongst pre-TF collectors too that Macau-manufactured items can be more incident-prone, but I may have mis-handled the nosecone section which is clearly spring-loaded. In this case I think the split in blame is equal, but due to notorious Macau and blue-plastic issues in this era of toy, I’m going with manufacturer’s fault.

Train mode hides the tragedy underneath

This is the incredibly rare Japanese Diaclone Trainrobo #7, a chromed version of Diaclone Trainrobo #1, the train transformer who would become leader of the Japanese Headmasters Raiden Trainbots. I have seen less than 5 of these for sale in all the time I’ve been collecting, and a few years ago while I was assembling this set of repainted Diaclone trainbots, I found this particular one in a collector’s store in Amsterdam while visiting a friend in Holland. To this day I cannot believe my luck, a Dutch collector had sold his collection locally and this cost me a mere 20 Euros. 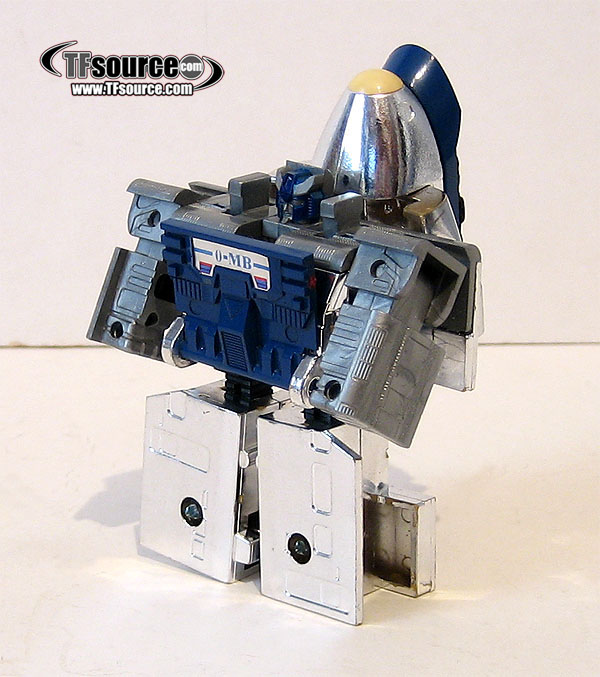 The Trainrobo #7 survived the journey back to London without issue and took up a treasured place in my collection amongst the 4 other repainted Trainrobos I had at the time. Then one day I decided to transform it for a friend and there was a great deal of resistance in the left leg, it wouldn’t extend. I thought about unscrewing it a little so as not to damage the extra chrome layer on top of the plastic but before I could engage my brain and do that, leg and robot were separated. Cue pillow-muffled screams and profanity. Diaclones are not known for their good quality, and the trains are especially fragile, but the extra layer of chrome on top of the plastic for this release just makes everything tighter, and I should have been more careful with such a scarce piece. 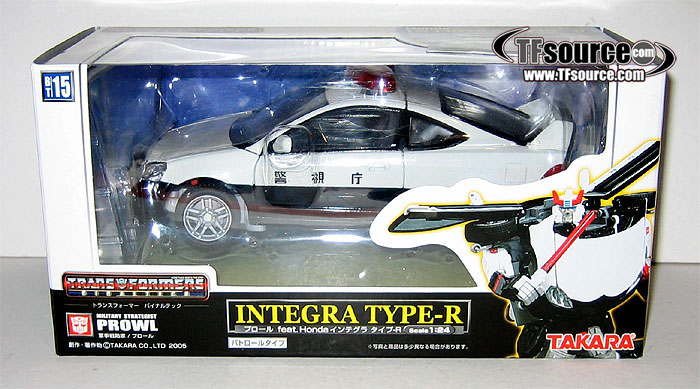 Quite a shocker of a QC issue

2005’s BT-15 Binaltech Prowl was such a nice release, a brand new mould for a wonderful line that was beginning to stagnate under the weight of repaints, an iconic Transformers character in Prowl and the (subjective) beauty of the Honda Integra Type-R. I bought this release and its vivid blue pearl edition immediately, and as with all my Binaltechs, it did not stay in the packaging for long. 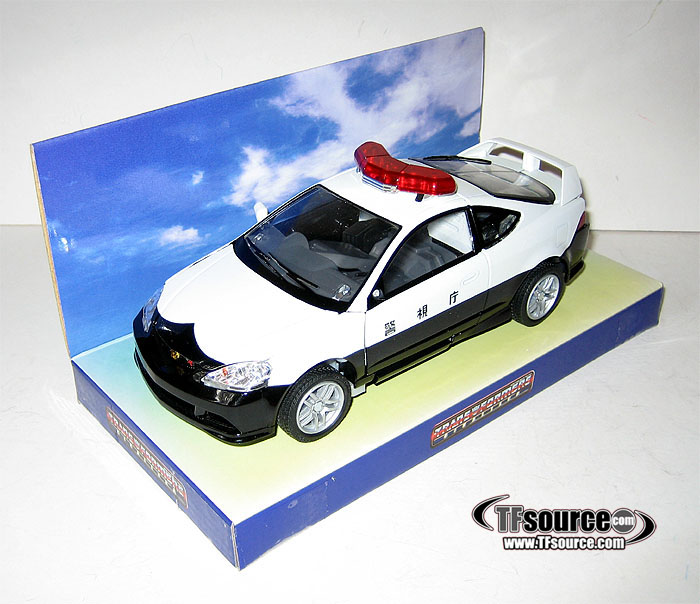 Objects in the side view mirror don't appear. At all.

Not only did Takara do away with the attractive grid pattern display stands, replacing them with a blue sky scene more akin to Care Bears packaging, but the quality of the toy’s manufacture had also been compromised. It is quite difficult to find an opened BT-15 Prowl that has not lost one of its wing mirrors. I don’t even remember it being that firmly attached in the first place, it almost peeled off instead of a solid break or as a result of an accident or mishandling. Strangely, I’ve not seen many vivid blue pearl edition BT-15s with similar issues. 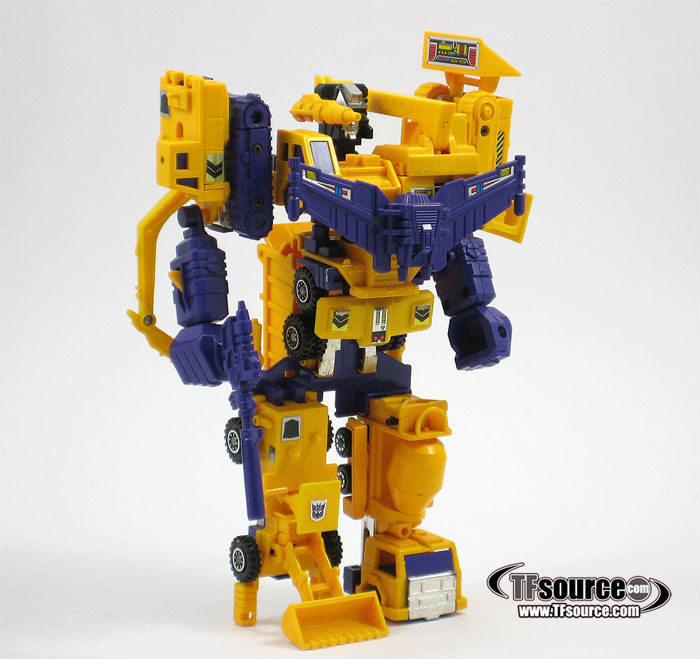 OK I know this toy seems to turn up in an article every month, but hear me out. The Ceji Europe yellow G1 Constructicons are not as unfathomably rare as some may suggest, individual Constructicons appear for sale now and then, but what really makes this a challenging set to assemble is the finding of accessories and especially combiner parts. I bought the above set near-complete and 100% able to make the full Devastator figure. 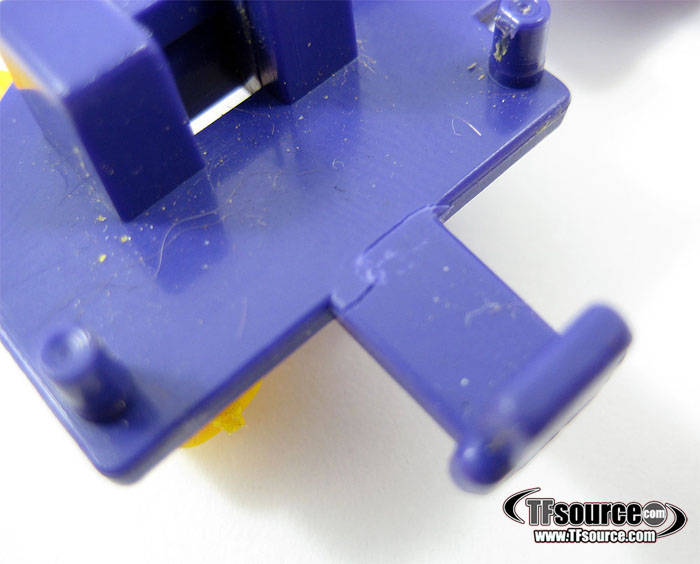 While photographing it for sale, having owned it for the better part of a whole year, I was separating the toys into individual bots and felt a hearty snap as I tried to disconnect one of the figures from the waist piece. This is clearly not an uncommon occurrence as a friend had a replacement he traded me having snapped his own. However, upon further study we realised that the waist piece I broke was actually a Hasbro mould piece, not a Ceji mould. The previous owner had forgotten to inform me about a swap he’d carried out a few years ago.  After I attached the Ceji mould waist to the Devastator I never had any fitting issues again, and he even stopped his perpetual forward leaning stance. So while this one rests solely on the collector,  I won’t be taking full blame! 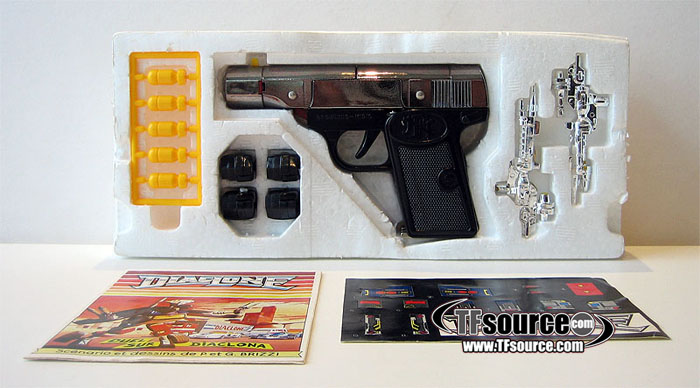 So perfect it was...

Now for my greatest shame. Years I waited to finally add this to my collection. A Joustra Diaclone “Robocolt” Browning in unused condition with comic, stickersheet and pristine chrome & missiles. One of the handguns had a broken scope but that was replaced with ease. I used to own a Japanese Micro Change Series Browning, same toy, exactly the same, just in a different box. I photographed this toy in gun mode extensively for my TF-1 article, it’s a very photogenic toy, but also a very fragile one if handled incorrectly… 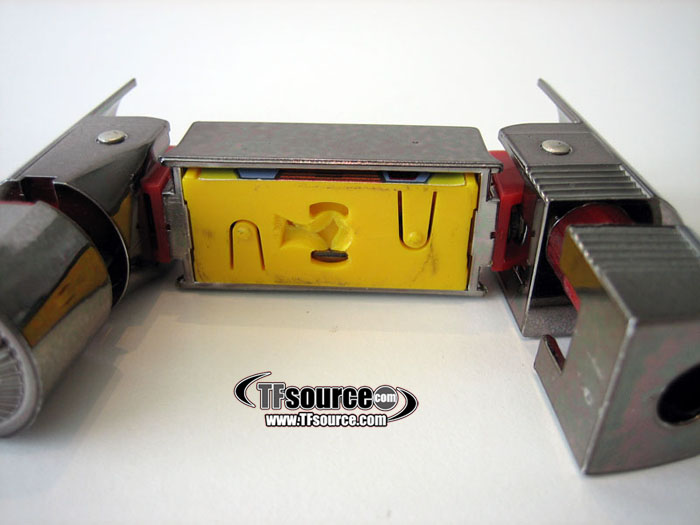 The epitome of fail

I, like many collectors, pride myself on never having needed instructions to transform anything vintage or modern (Masterpiece Megatron aside), and I had even owned this mould before! I made the terrible mistake halfway through the photo-shoot of trying to pull the chest/barrel section up without extending the end of the gun out first, thereby creating great pressure and stress on the peg around which the chest pivots. The horrific results can be seen in the above picture and the first picture of this article. Unused vintage Diaclone treasure, ruined. 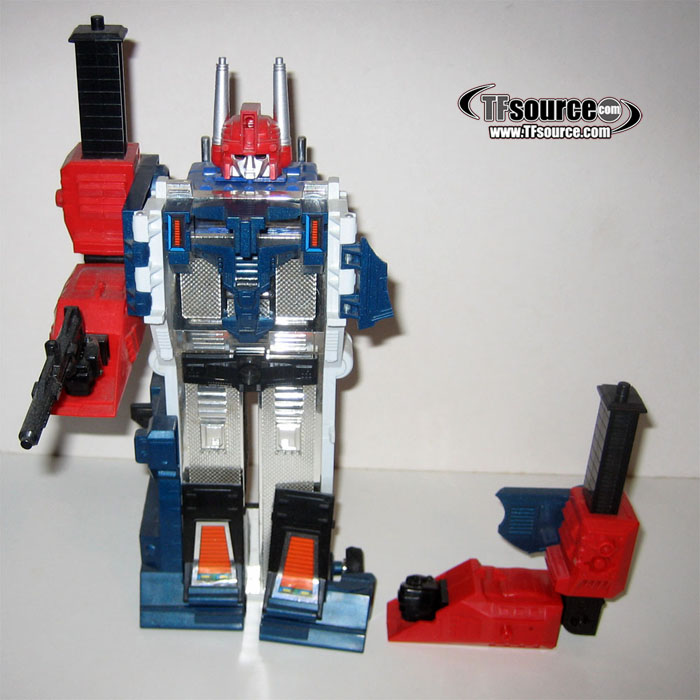 It didn’t matter how old my valuable toys were, or how much I had paid for them, I was never the type of collector who was able to leave them well alone. I needed to explore their features, history, moulding and appeal. No point writing articles if people can’t appreciate the toy in the review fully. I have been the first to transform many of the unused vintage toys I’ve ever bought, and because I have significant knowledge of the product I always got away with it having treated things with due care. As time creeps by, these precious artifacts are becoming more and more prone to wear, damage and as seen above, tragedy. Sadly, even I now refrain from transforming the most expensive and mint items added to my collection recently.

However, thanks to the kindest members of the community, this story has a happy ending… 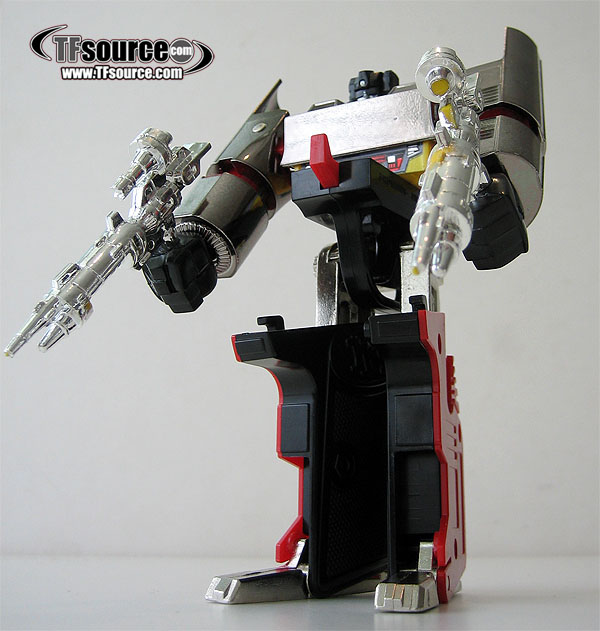