More News To Me 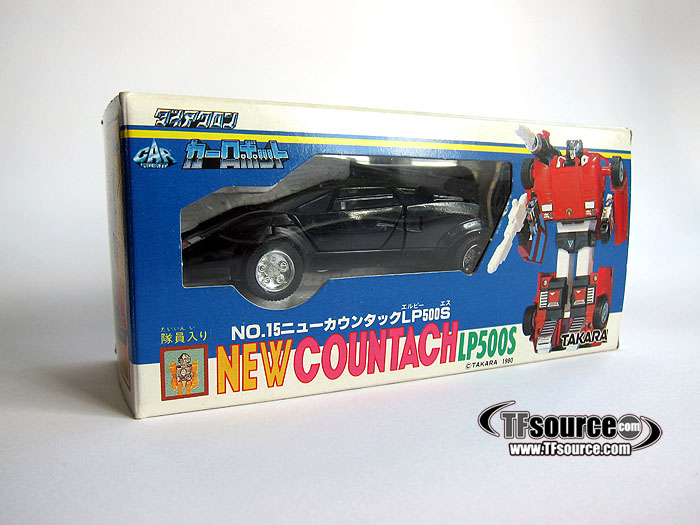 It’s still happening. The better part of 30 years after the fact, and not 6 months after our last article on ‘new’ vintage pre-Transformers and Transformers discoveries, we’ve managed to cobble together another bunch of items which may or may not have been commonly documented or known about in the past. Thanks to the ever growing knowledge-base and resourcefulness of vintage pre-TF and TF collectors, this hobby continues to serve up surprises and challenge established beliefs.

In June, our ‘News To Me’ article covered such new discoveries as a white Mexican Cliffjumper with red face, a red-cabbed Japanese Diaclone Powered Convoy with chrome trailer and Venezuelan minibots. This time out, apart from the major Diaclone discovery we’re going to look at, most of the items featured are more a case of small details which collectors may have ignored or missed for years as opposed to ground-breaking new finds. So, despite the enthusiastic opening paragraph, it may all end up rather anti-climactic, but we hope not! 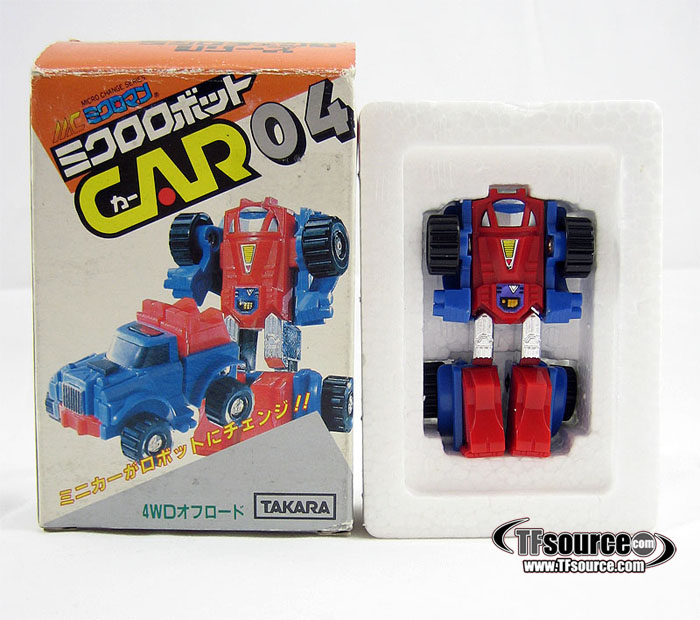 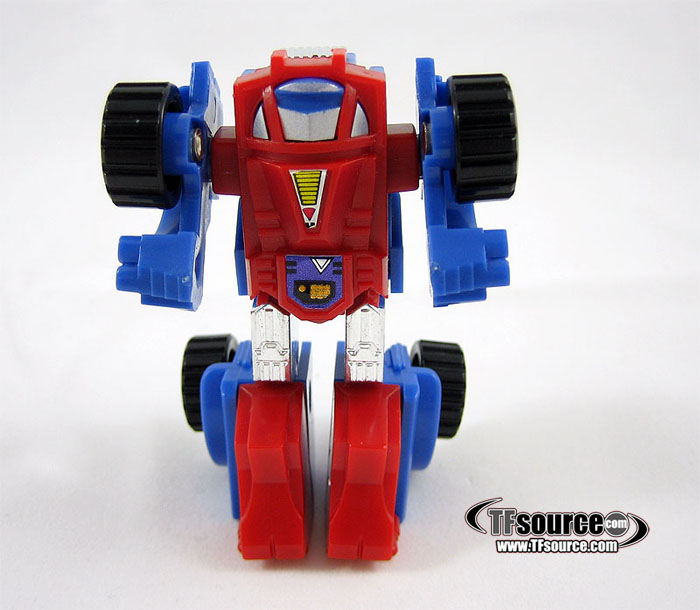 On the surface this just looks like a minibot Gears in some mildly interesting Japanese Pre-Transformers packaging. It’s actually not too far away from being just that, and were I to have only seen the above pictures of it even in such high resolution, I still wouldn’t think this was particularly special in any way. The toy that would eventually become the Transformers minibot Gears was originally released as a Micro Change Series Mini Car 04 – 4WD Truck, first in a larger box where the toy was packaged in robot mode housed in styro, and then in a much smaller box where the toy was in vehicle mode, wrapped in a foam strip.

So what’s different? Well, until I actually saw the above pictured pre-Gears in the flesh I never knew that the first release of the toy in the larger Micro Change Series box was not just the standard blue and red, but a very alluring purple-ish blue and red. It doesn’t come out particularly well in photography but you have to see it to believe it, the colour is instantly noticeable and not at all the same as a Transformers baby blue Gears. With this being such a hugely common Transformer, reissued and even available in a multitude of countries with minor variations, the large box Micro Change version’s purple-like colour was really very striking to me, and instantly made this toy a hundred times more desirable and interesting. 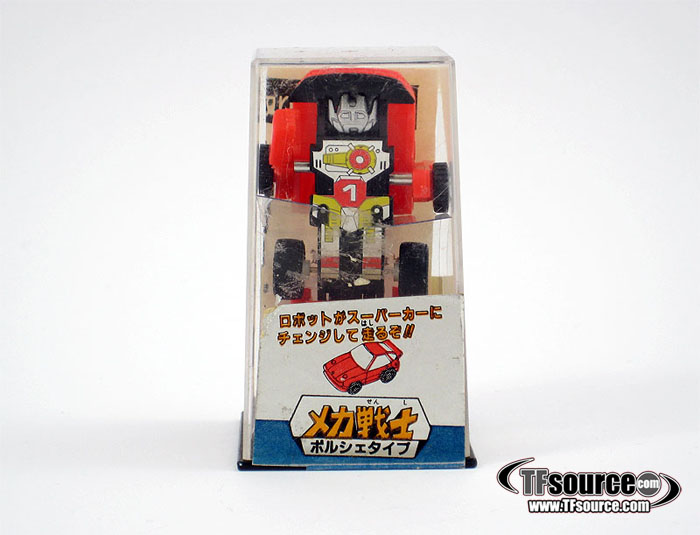 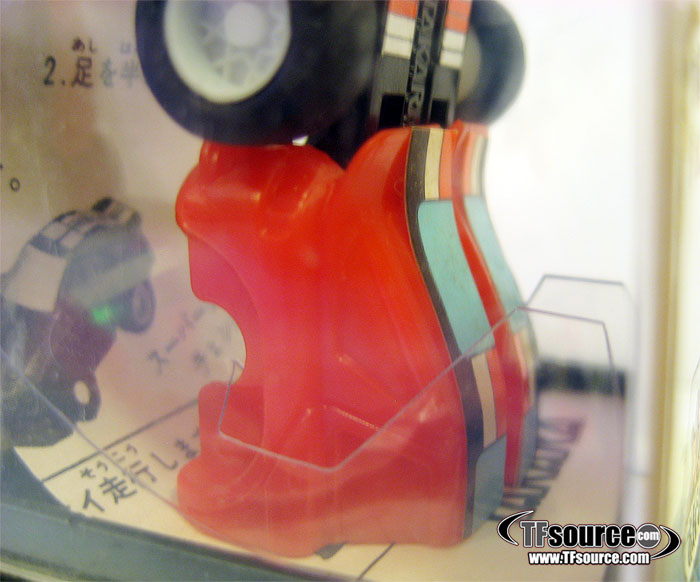 Staying with the small guys, here we have a Takara Mecha Warrior #1 in red, the Porsche 928 variety. These pull-back-and-go Takara midgets were released in delightful little plastic cases and would of course go on to become known as Transformers Mini-Spies. The Mini-Spies were used by Hasbro to debut the rubsign concept where vigorous rubbing or a particularly warm day would reveal a toy’s Autobot or Decepticon allegiance. The TF versions were packaged alongside carded minibots.

What I was unaware of is that the Takara pre-TF versions of the Mini-Spies not only came in a unique red colour which Hasbro never used, but also that they were covered in stickers never seen on Mini-Spies. This Porsche 928 Mecha Warrior not only has a fetching central leg and chest sticker, it also has Martini-reminiscent racing stripes on the rear of vehicle body and front & rear windscreen decals. For those that care about such things, you can see the wheels are the complex hub-cap variant. The amount of effort put into the presentation of such a tiny vehicle was a really nice surprise. 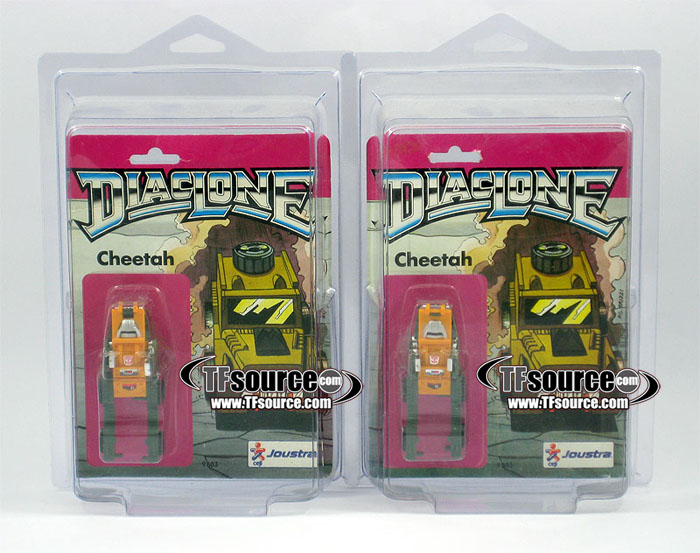 A couple of dirty Cheetahs

This was nothing short of soul-destroying for me, personally. It took me an incredibly long time to not only track down a Joustra Diaclone “Cheetah” Brawn, but to actually find a way of separating it from its owner. So one Peruvian minibot trade later, I finally had a Joustra Diaclone Brawn, showing off his bizarre Autobot logo despite being a Micro Change toy packaged as a “Diaclone”. I happily assembled my complete set of 9 carded Joustra Diaclone smaller vehicles and moved onto bigger fish. This year, unfortunately, it came to light that even within common first-year Joustra Diaclone releases there are stamping and moulding variations, meaning I basically had to find and buy two of some toys to have the complete run.

The most surprising example was the Joustra Diaclone “Cheetah” Brawn, which came in both TAKARA JAPAN-stamped variety and late Takara + dates stamping variety. I could probably have lived with not owning the stamping variant (who am I kidding actually), but the two versions are visibly different. If you study the above picture, you’ll notice that the Joustra Brawn on the left has a 3-piece silver head mould and a big black square above his robot head, but the one on the right has a one-piece silver robot head mould and just a slim green tab above his head, and there are differences elsewhere also. This mould change exists in Transformers Brawns too. Having had the variation shown to me, I was mercifully lucky enough to track down a variant Joustra Diaclone Cheetah within a couple of months. It pays to have good friends. 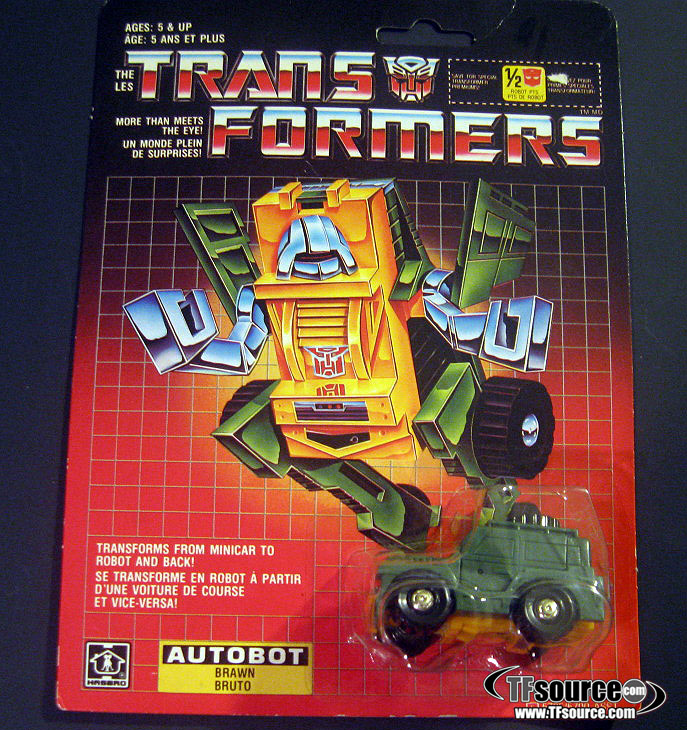 Imagine how crowded the rear of the card is

Still on the subject of Brawn and minibots, while writing the Canadian G1 Transformers article for TFSource Blog, I received a gorgeous pictorial contribution of a 1984 pre-rub Canadian Transformers “Bruto” Brawn. The bilingual nature of Canadian Hasbro Transformers was no mystery, but what really stood out and excited collectors (me) was the fact that pre-rub Canadian minbots had their robot points on the front of the card, something not seen anywhere else in the world of G1 Transformers! I have since seen a Canadian “Rapido” Windcharger with its points on the front too. How’s that for an obscure sub-category to keep you bored collectors busy? 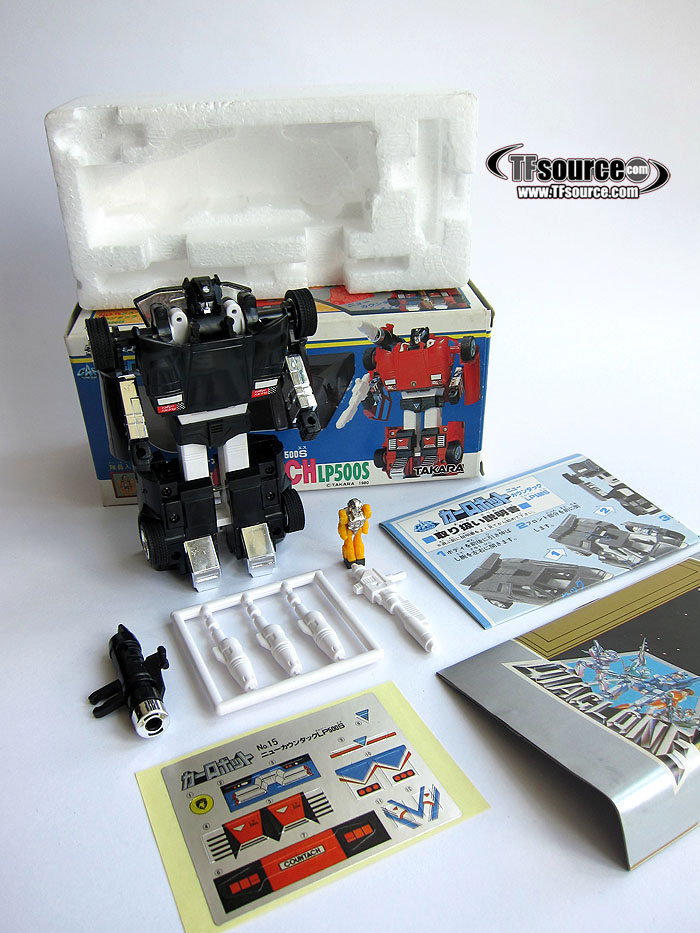 One could argue that all the items discussed so far this week are not really new discoveries, just known toys and releases with under-documented features and oddities. Our last item blows them all clean out of the water and is the definition of ‘new’ discovery. On a trip to Japan in the summer, well known blogger and collector Heroic Decepticon stopped off at famous vintage toy store Hero Gangu and purchased what appeared to be a black Diaclone Countach (pre-Sideswipe) in a single-pack Diaclone box.

This wasn’t just a custom parts-swap or a Diaclone ‘DeepCover’ PCDX giftset black Countach, this was a genuine all black Diaclone Sideswipe. This toy was previously thought to have been released only in red and yellow for the single boxes, but this black version had all the right moulding, sticker and stamping details to be a previously-undiscovered vintage Diaclone car variant. Whether it was a seriously low production run, a market sample or prototype we’ll probably not know for years, but it was so case fresh that there’s a chance there are more out there. You can read much more on the discovery and research conducted on this Diaclone Black Countach here and here.

And so it continues, the discovery of previously unearthed variants and features of toys considered to be common or uninteresting. Even now it’s hard to imagine a day when there is nothing else to discover or look forward to in the world of vintage Transformers and pre-Transformers. I already have two more revelations ready for the next chapter in the ‘News To Me’ series… 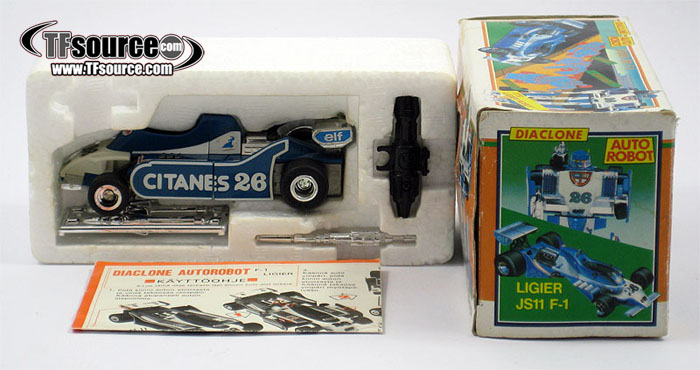 Finnish Diaclone Mirage - Not one of those aforementioned revelations.

Huge thanks to Heroic Decepticon and Whoamidri for Black Sideswipe and Canadian Brawn contributions respectively.

More News To Me