iGear’s Mini-Warrior UFO (available now at TFSource) is another great entry in what is turning out to be fantastic series of transforming robot toys. Released at the same time as Hench (who I already reviewed at battlegrip.com) my only complaint with both of these toys is that they’re so very neat that I want the next releases in the series right now. I have to wait? That’s so unfair! 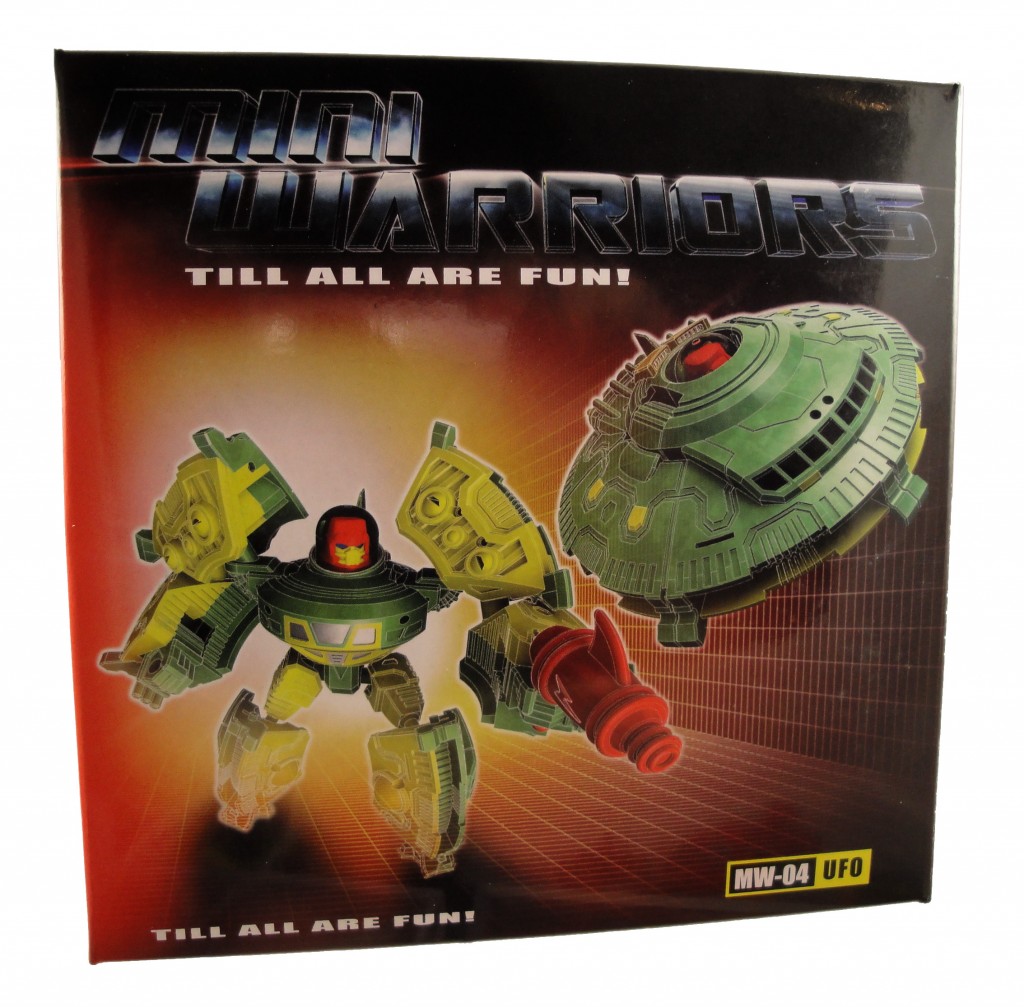 If you’ve seen any of the earlier toys in this series (like Black Rager reviewed here last month) then you know that iGear is giving us clean, functional boxes that are professionally-designed and make all of us anxious to get the box open and grab the toy inside. The cover text continues to be fun to read and it’s good to see iGear taking the time to craft backgrounds for their toy designs. 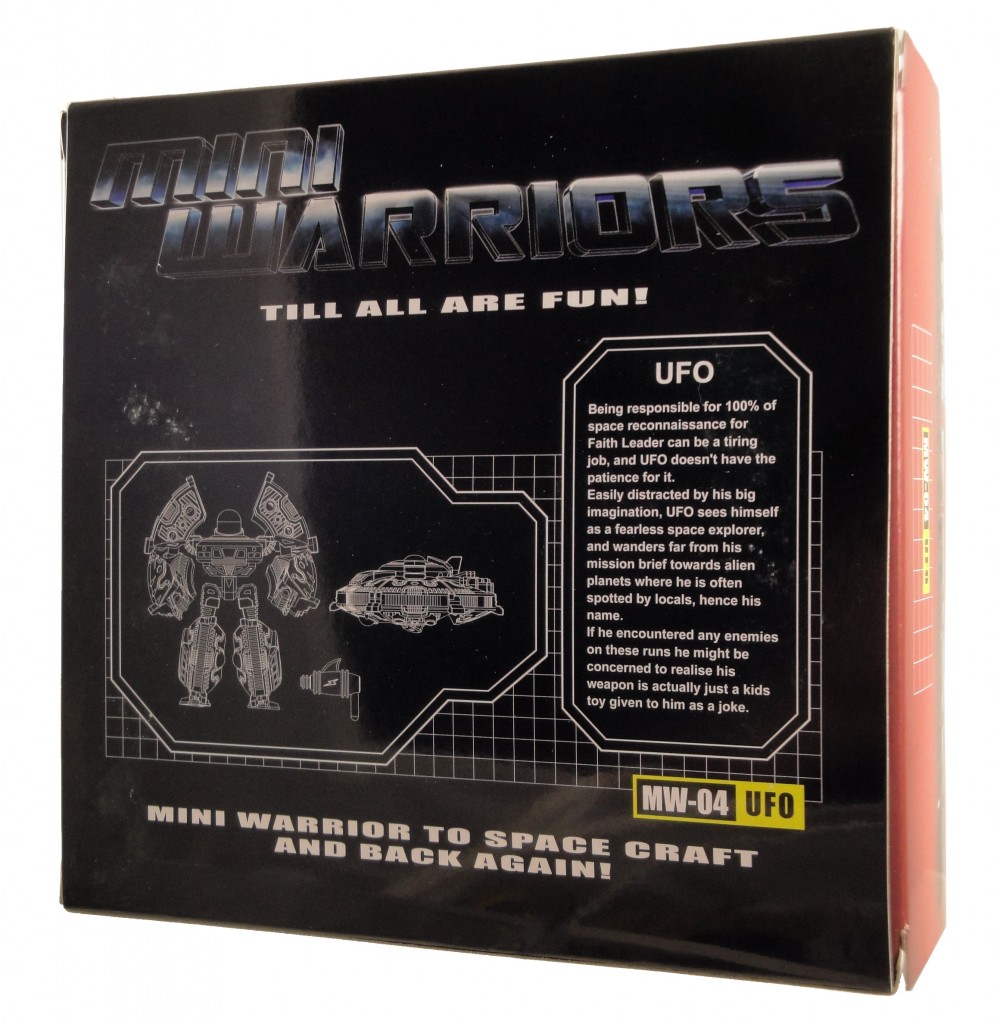 Inspired by the 1985 Transformers Cosmos toy, UFO transforms into a green and yellow flying saucer with a dome top and a bright red weapon that can plug into any one of a number of sockets ringing the bottom of the craft. Everything about the vehicle mode is well done and the final design feels like a mix of the classic toy design and the more recent Cosmos that was released by Hasbro a few years ago. 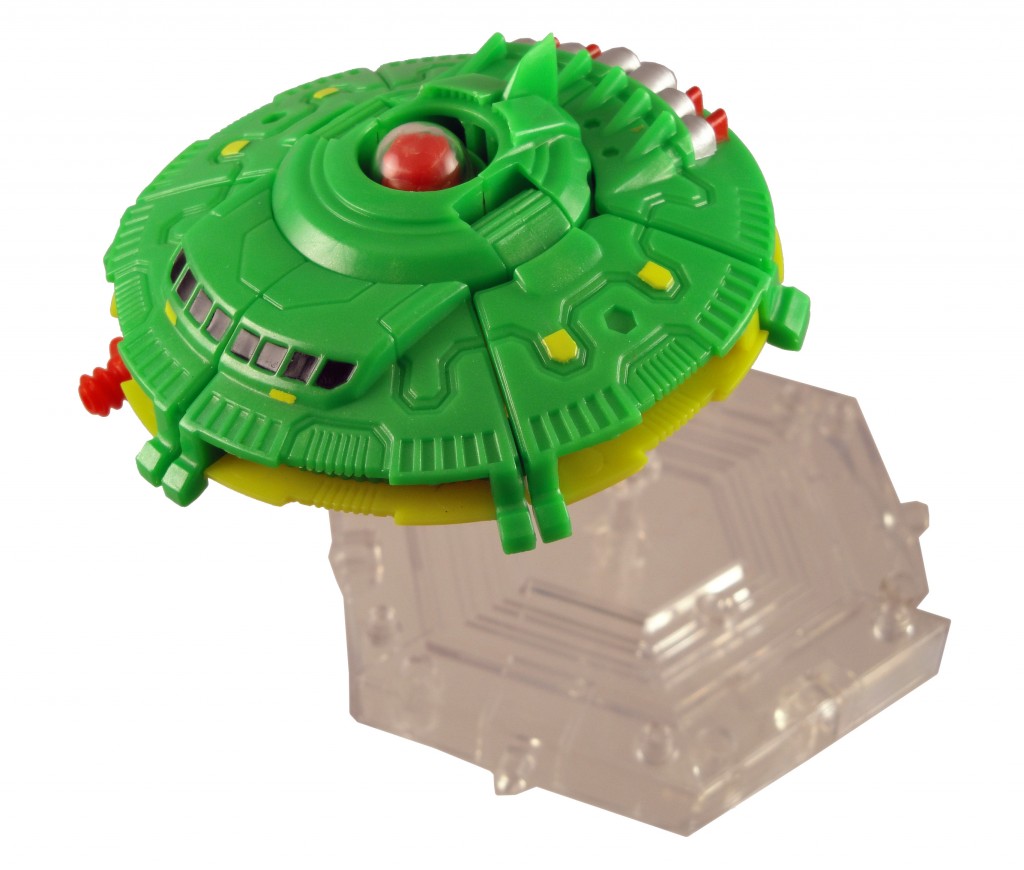 One really nice touch is the base iGear included with the toy which allows you to display UFO flying over your shelf or desk. The stand has three articulation points and the base is sturdy enough that I’ve managed to pose UFO safely at all sorts of weird angles . . . including in robot mode! The toy may be a little smaller than Hench (roughly half an inch shorter), but the stand more than makes up for the smaller size. 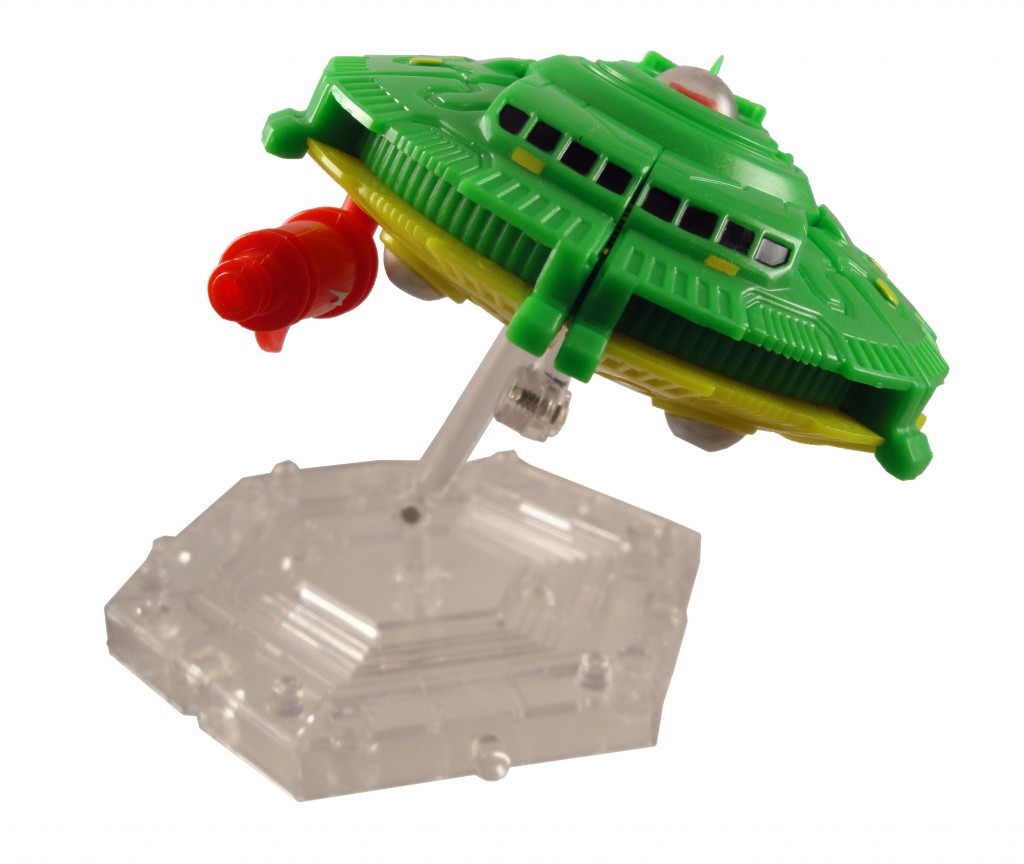 The vehicle mode is a great blend of old and new and I can say I’d happily buy this in other colors just for the chance to display an army of flying saucers.

As fun as the vehicle mode is, it’s UFO’s robot mode where the toy really gets exciting. With a clean and easy to follow transformation the toy changes quickly to robot mode where he has a squat, heavy look that greatly suits the feel of the original toy. Cosmos was never the most graceful-looking robot and UFO here is a fantastic update to the idea of the character. 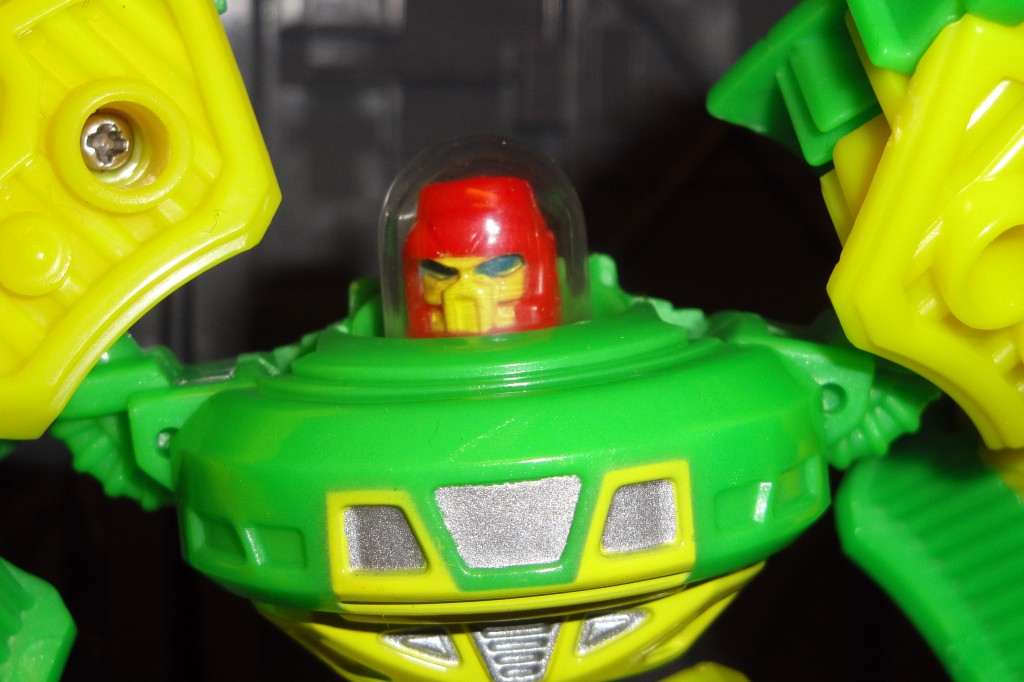 The addition of the domed helmet, inspired by the IDW comics, is what initially sold me on UFO. I was interested in the idea of a modernized Cosmos, but it was the domed helmet that had me pre-order the toy as soon as I could. I know it’s a little detail, but to me it’s a detail that really helps give the character a fun look and makes him really look like a deep space operative. Sure he’s a robot, but clear dome helmets can look awesome on anything. 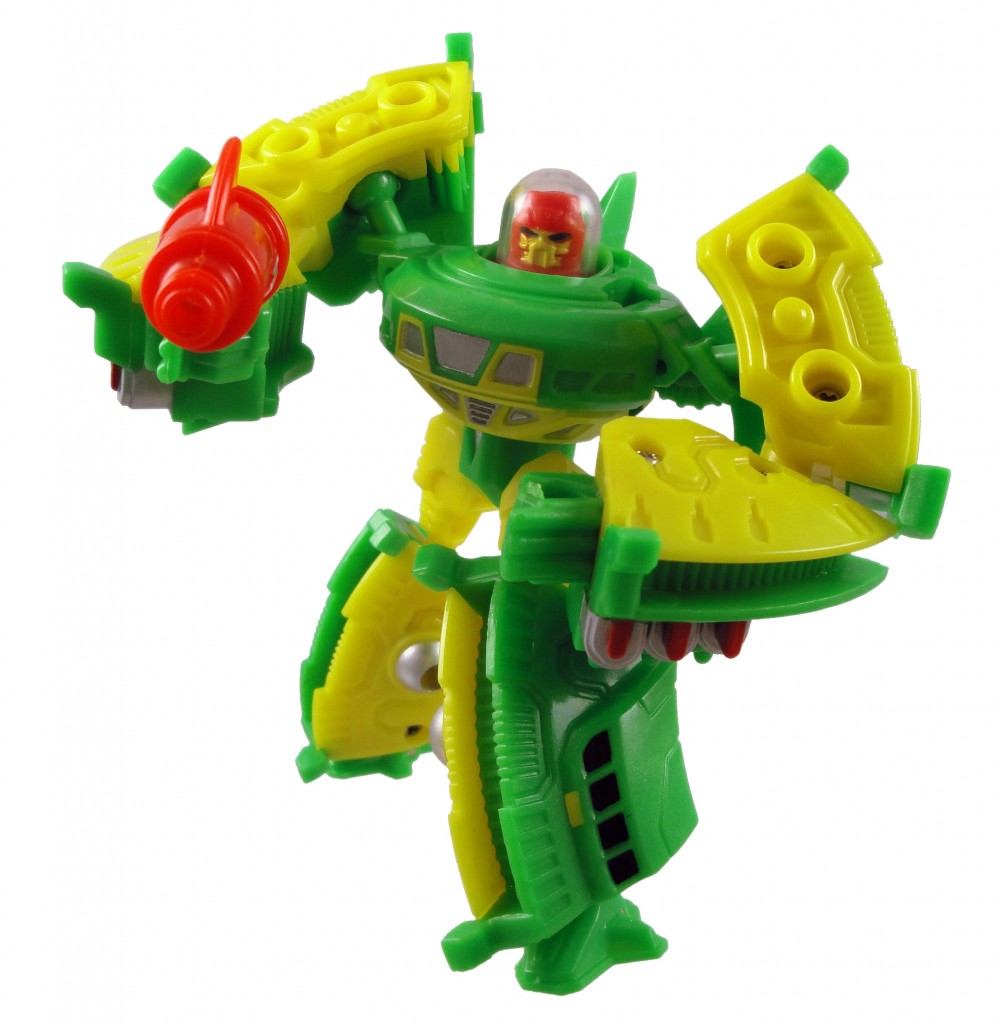 Like the other toys in the Mini-Warriors series UFO doesn’t have a lot of paint apps, but the paint that he does have is cleanly applied and looks good. Silver detailing, a few yellow spots on the green, and the black windows pretty much cover all of the paint and I think that if you look at the photos you’ll see that the paint is neat. An excellent job that just makes me even happier that I pre-ordered this toy . . . and I am ready to pre-order the next wave of Mini-Warriors as soon as I can. 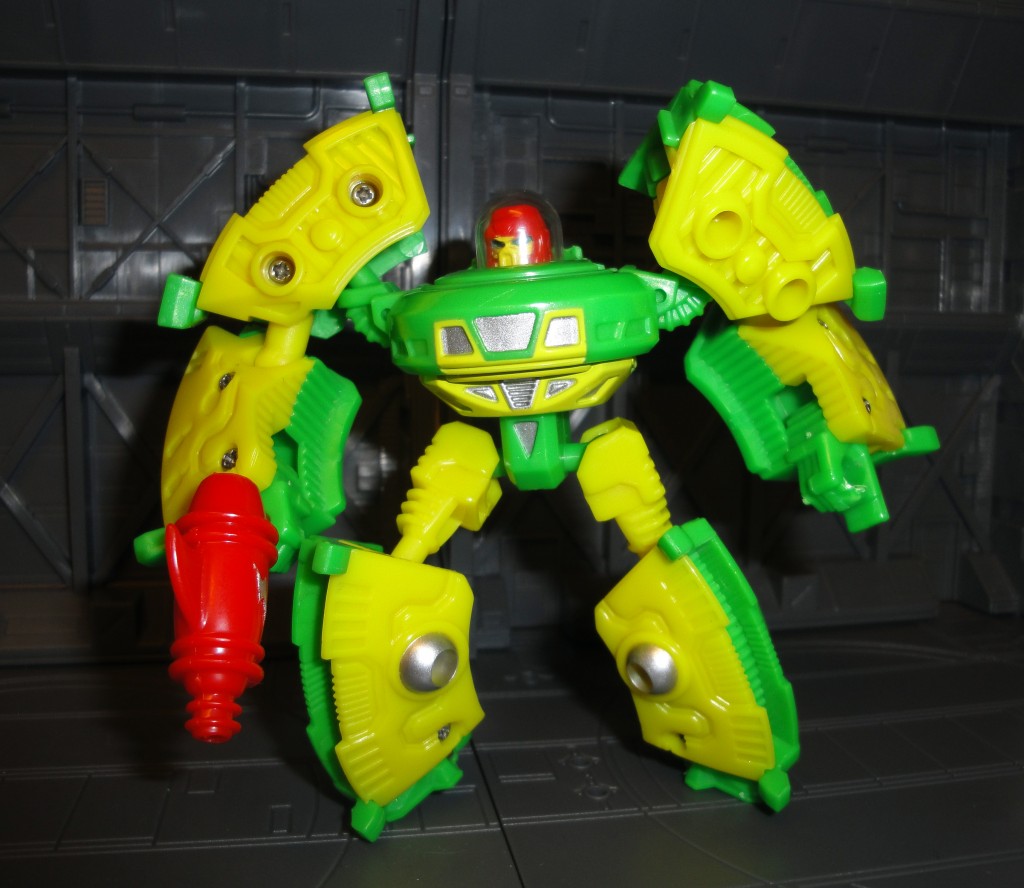 If iGear does nothing more than focus on their Mini-Warriors series — maybe with a mix of smaller toys like the first two in the line and slightly larger toys like UFO and Hench — then I’ll be buying these toys as long as they keep making them. iGear also makes some other fun toys, but the size and transformation design of their Mini-Warriors series has made me a huge iGear fan and I am hoping they’ll tackle more classic character concepts. 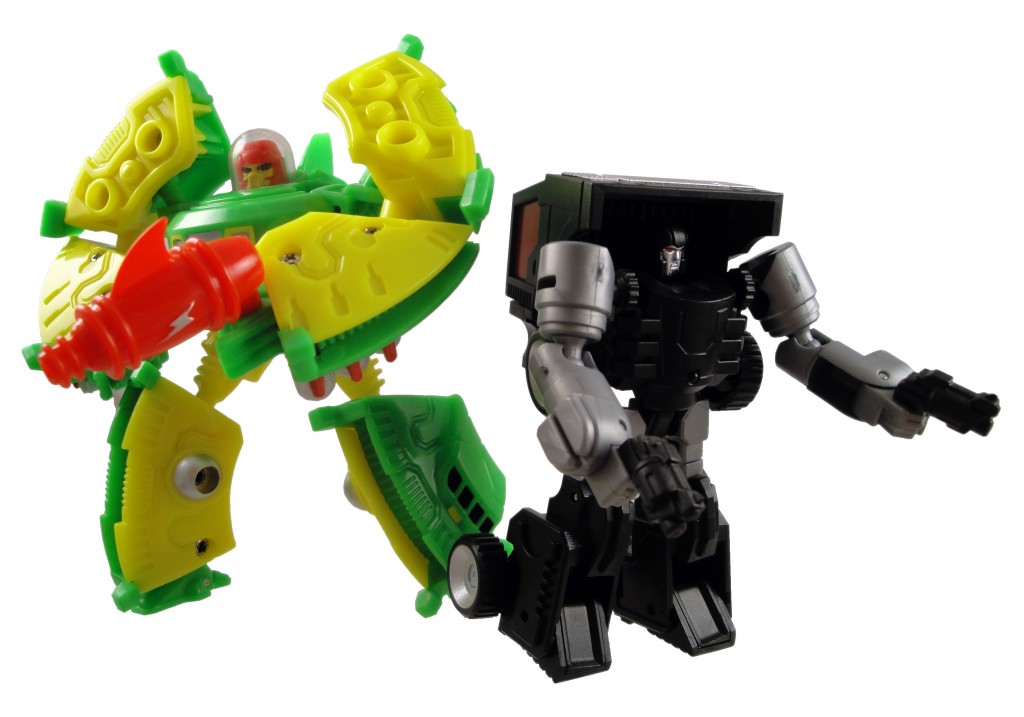 Both UFO and Hench are highly recommended if you like the photos of the toys. Very nice plastic, incredible designs, and just pure fun are all reasons that I’m telling everyone to buy at least one toy in the series and give iGear a shot. I think you’ll love what you get and soon find yourself chasing down the earlier Mini-Warriors toys. 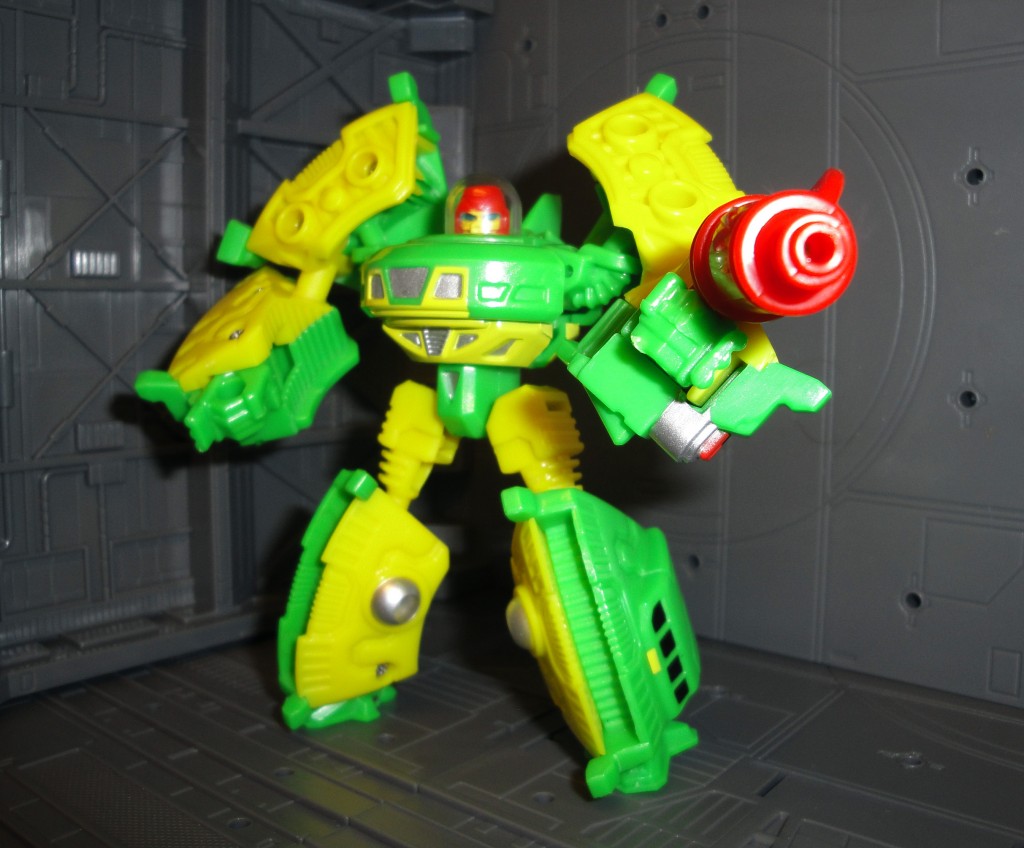 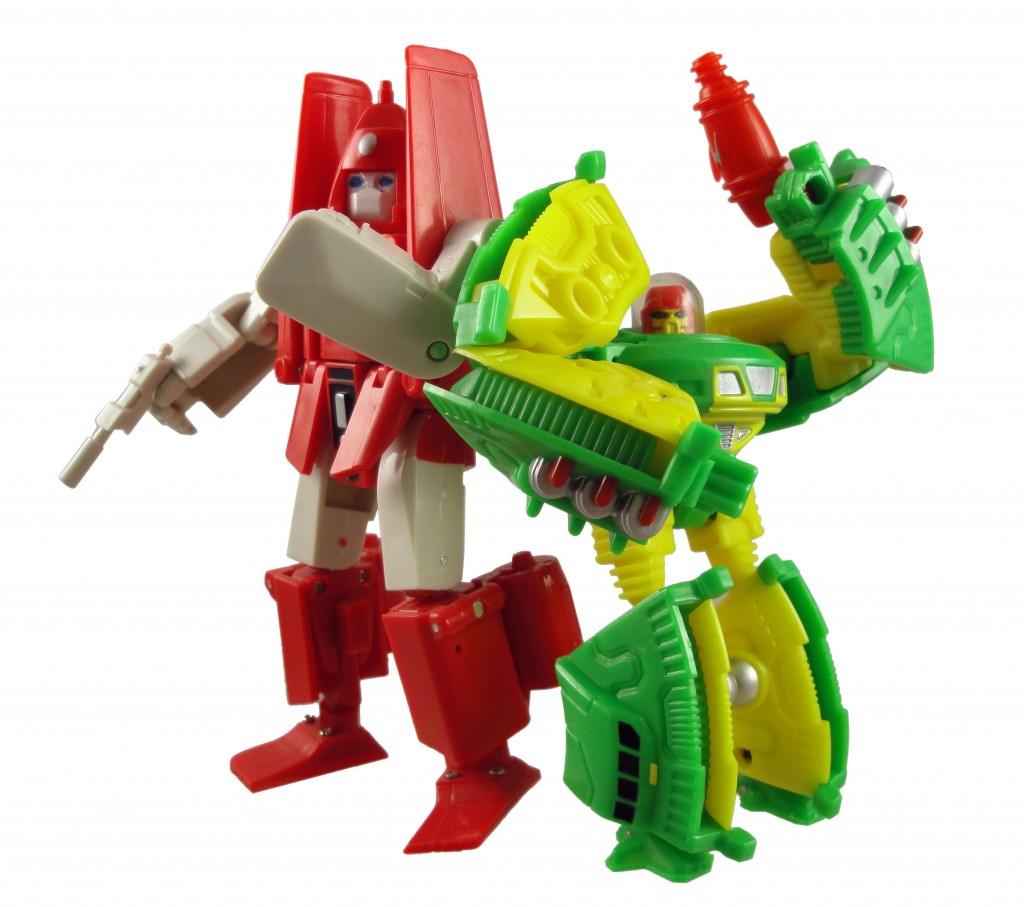 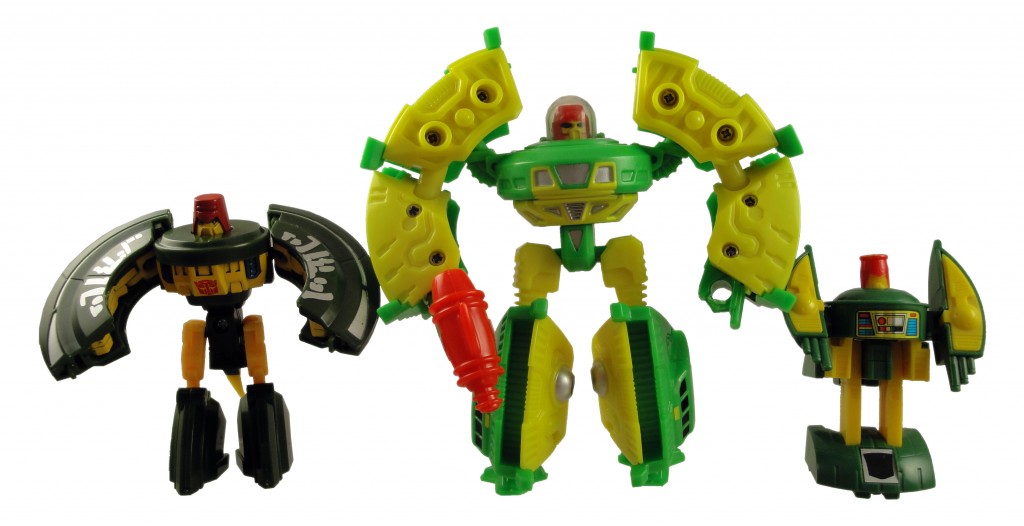 Philip Reed works in the game industry and then plays in the toy industry. His entire life is about entertaining himself and those around him!

View all posts by Philip Reed ››

This entry was posted in Source Reviews Tagged with 2012, iGear