The Shows Must Go On 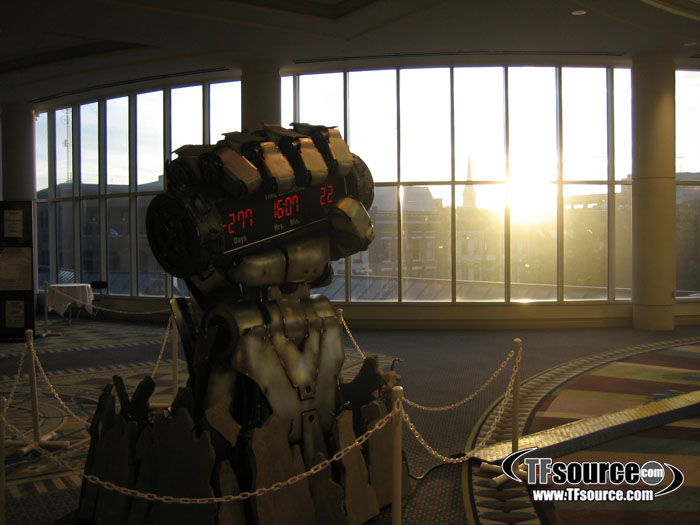 The Big Bang Theory, Comic Book Guy from The Simpsons, Trekkies, all of these popular culture landmarks have given the toy show and convention scene quite a lot of work to do when it comes to credibility among the general populace. But who cares what conformists think? Toy shows are great! And they don’t come much better than BotCon.

Regardless of what long-time attendees say about how the show has declined from what it once was, a gathering of like-minded lovers of Transformers in its purest form, my experiences of BotCon in 2006 and 2007 have left me with nothing but treasured memories. Of course I have nothing to compare them to besides a few UK shows like Transforce, Memorabilia, Decepti-con, Collectormania and Auto Assembly pre-2005, but I personally look forward to one day being able to make it to the US for another BotCon. This week I look back at some of the reasons why. 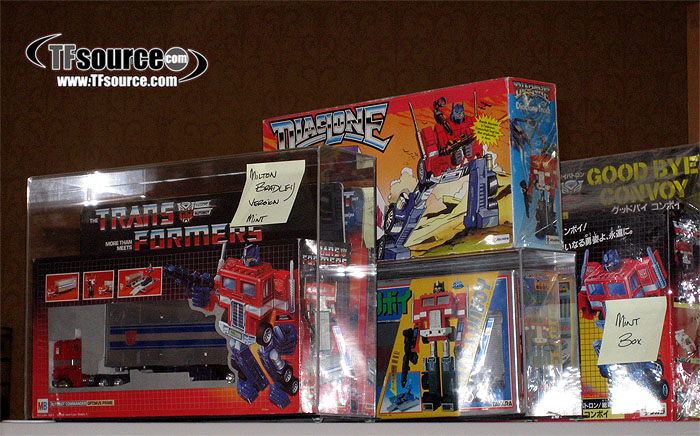 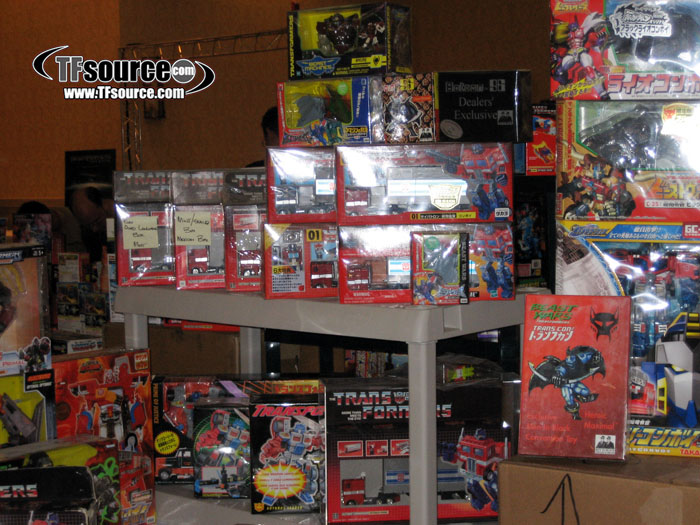 For a start, back in 2006 and 2007, there was no shortage of G1 stock on display at the dealer tables. Everyone knows the Japanese dealers who come with all sorts of exclusive goodies and occasionally prototypes, Elvin Pena’s legendary Optimus Prime collection for sale, The Spacebridge’s UK or Euro-centric stock and merchandise oddities and in 2006, BotCon founders Karl and Jon Hartman sold their entire collection at the show: 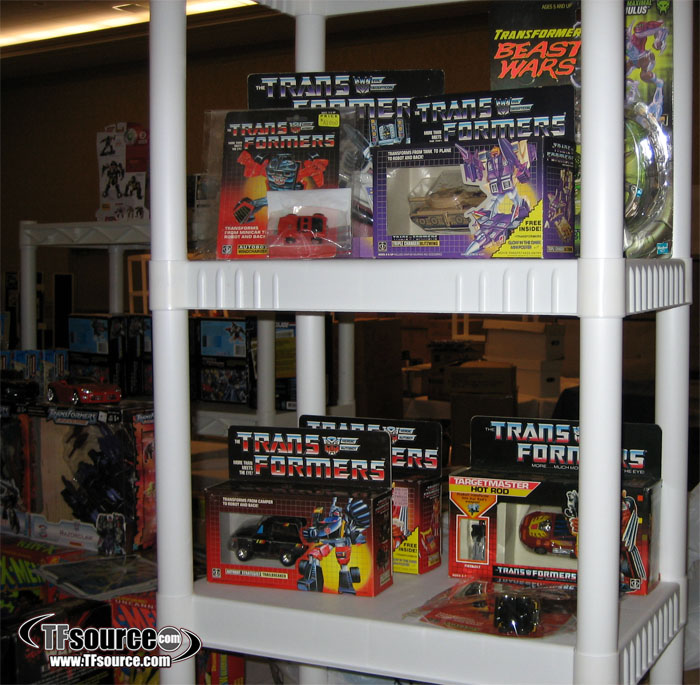 In addition to the items beings sold at their table, the Hartmans reserved a few special Transformers rarities for auction. These included a sealed Targetmaster Hot Rod, a pre rub Trailbreaker in a no-grey-border box (never seen one since), poster box Blitzwing and Astrotrain and the orange-canopied Ramjet production sample that came from an ex-Hasbro exec. Quite often, items can be sold at BotCon that never find their way online or into the public domain. Examples of this include the prototype Hasbro Unicron and Diaclone campaign prize gold Fairlady Z pre-Bluestreak. With attendees usually staying at the convention centre hotel or nearby, plenty of deals are conducted in hotel rooms. One such deal was for a gold chromed Lucky Draw MP-1 Masterpiece Convoy: 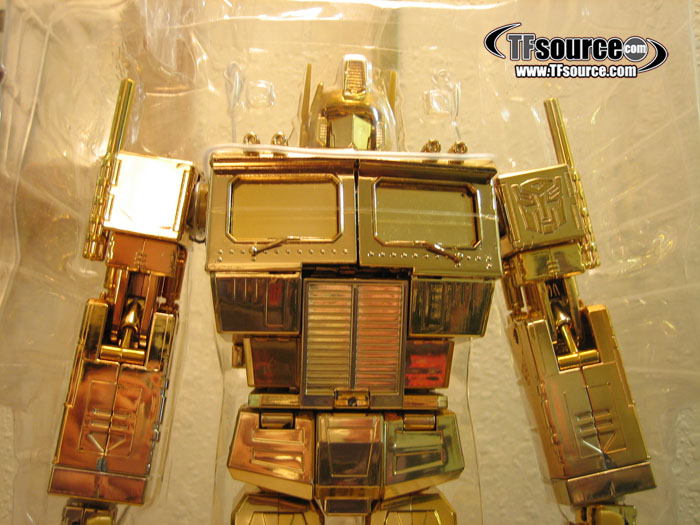 Speaking of hotel rooms, on both occasions I’ve been there as a dealer’s helper and so I’ve gotten to see the other side of BotCon, one filled with gigantic shipping crates, cardboard boxes for bed-partners and the very interesting pre-show exchanges between long-time dealers who have been doing this event for over a decade. Their anecdotes about how it used to be, and what they used to find at the show are always entertaining. 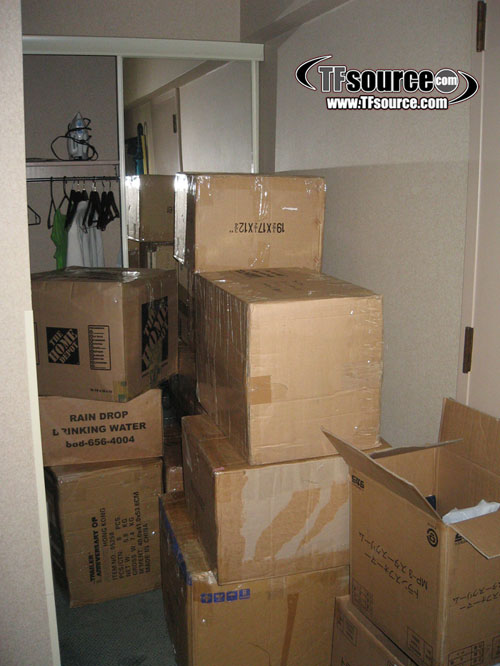 BotCon also offers a collector the opportunity to meet all the people they may have conducted deals with over the years, spoken to, debated with and met online. A first-time attendee will never fail to be shocked at the sheer scale of the event. As well as fellow fans, one might have the privilege of meeting voice actors from the original cartoon or even current series,  Transformers comic and box artists, those responsible for mainstream Transformers games, Hasbro staff and even actors from the 2007 Movie. 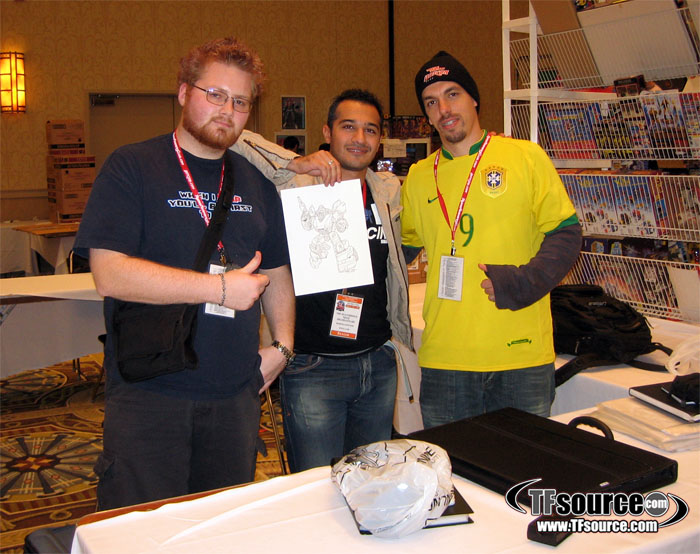 As I mentioned in the Alternators Artwork Gallery articles, I was able to meet and purchase original box art from official Hasbro artists Marcelo Matere and Alex Milne at BotCon 2006 and 2007 as well, an opportunity that simply could never have come to pass without attending this event. Others had the chance to meet Stan Bush and have their Transformers: The Movie soundtrack LPs signed, or have the legendary Peter Cullen sign their Optimus Prime toys. 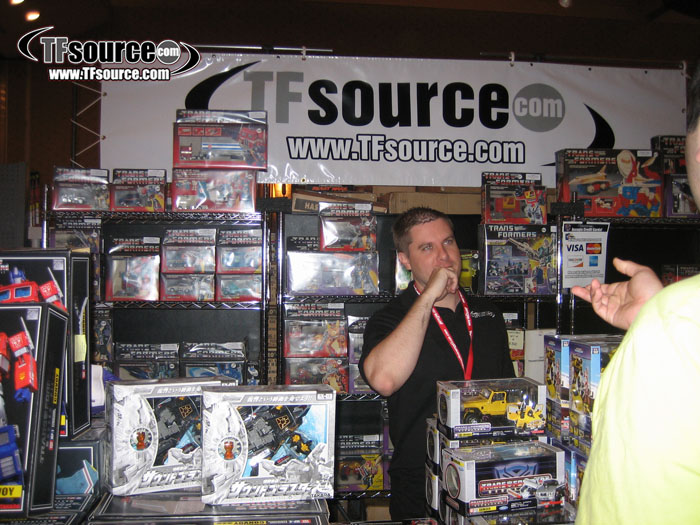 Does this really need a watermark?

Being able to meet those responsible for your monthly plastic crack fix can also be an enjoyable and educational experience. Meeting the crew from TFsource in person was a highlight for me on both occasions that I attended BotCon, and just one more step in the process that eventually led me to write these weekly columns for Curt and his empire. I also spotted, from his name-tag, an eBay user who had tried to pull a fast one on me a couple of years before, that was an interesting experience…although one never behaves in person how one behaves online, that was clear from very early on. 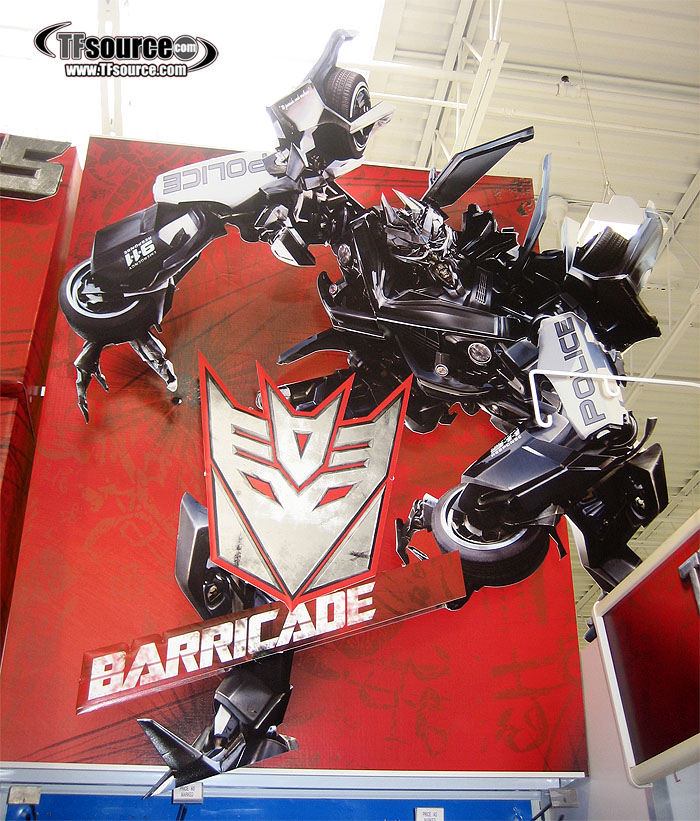 Barricade, summer in the city! 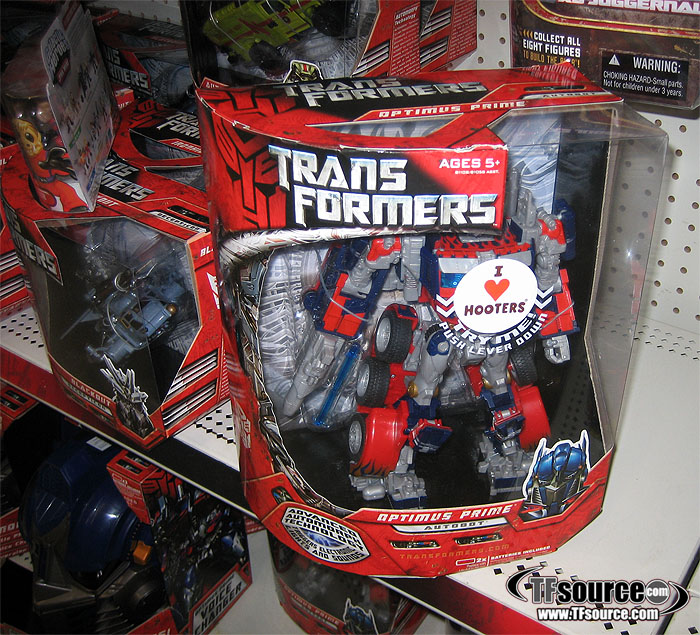 In 2007 when I attended BotCon in Rhode Island, the live action Michael Bay movie was big news and stores were just starting to stock the initial runs of figures. It was interesting to see swathes of fans explore and plunder local Toys ‘R’ Us stores. We had to go all the way to Manchester, Connecticut to find the above stock at a Walmart. Being the US, toys were almost half the UK retail price so we bought a complete run of Movie figures and shipped them home.

Now, what else is in Rhode Island? That’s right, Hasbro! 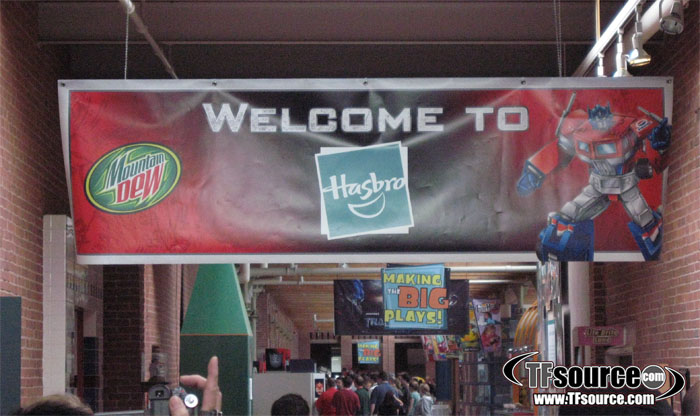 The special events and tours that were put on by the organisers in 2007 made BotCon unmissable. There was the Movie premiere and the Hasbro tour, which accounted for about 80% of my photographs on the trip. Collectors and fans were treated with the utmost respect, patience and good will, truly an unforgettable occasion and one that was appreciated by all concerned. To think I almost skipped it due to chronic jet lag… 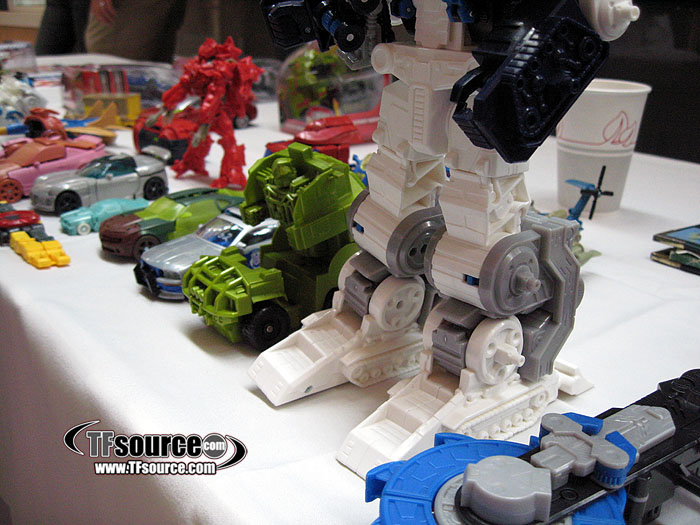 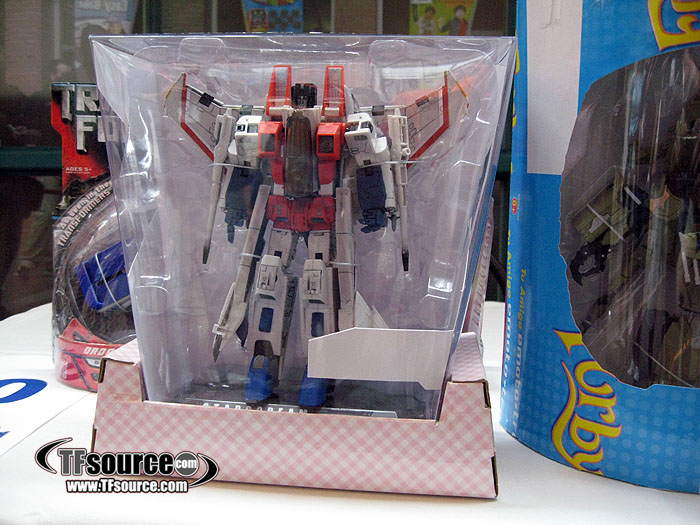 Attendees were treated to waves of prototypes, test shots, production samples and packaging mock-ups of current and upcoming toys from the Movie, Legends and Masterpiece lines amongst others. A presentation by Greg Lombardo and various other Hasbro staff along the way made it a very interactive and immersive experience. 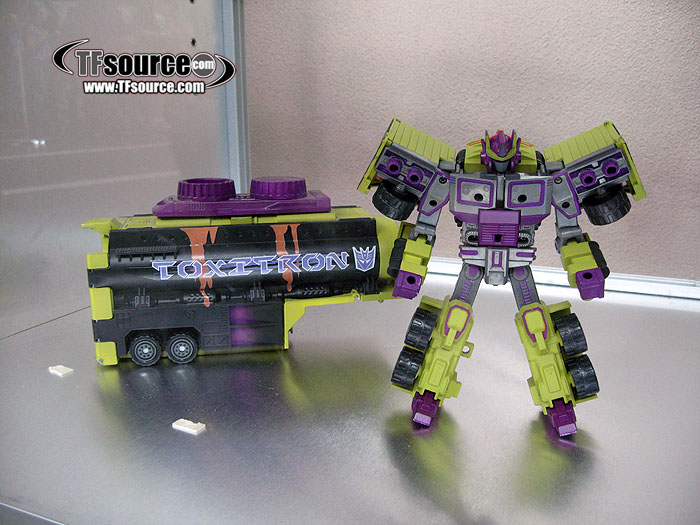 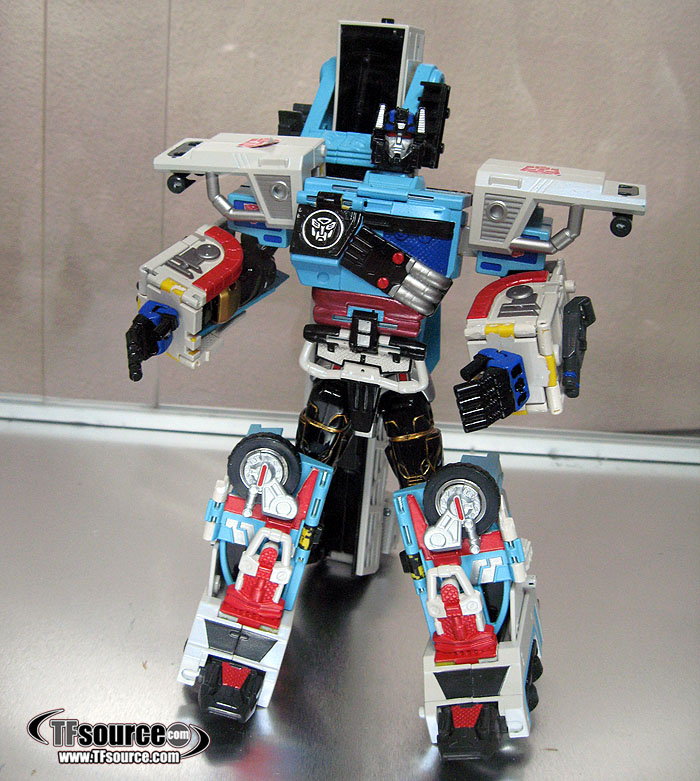 One particular set of cabinets housed some truly breathtaking prototypes and samples, including the Toxitron and Super-Fire-Convoy-cum-Defensor above. There were also examples of hardcopy Alternator/Binaltech Jazz as a Porsche, a smaller scale Binaltech/Alternators Smokescreen, Classics Cosmos, Shockwave, Arcee and Bumblebee. A few of those can be seen in our Appeal of Pre-Production articles. 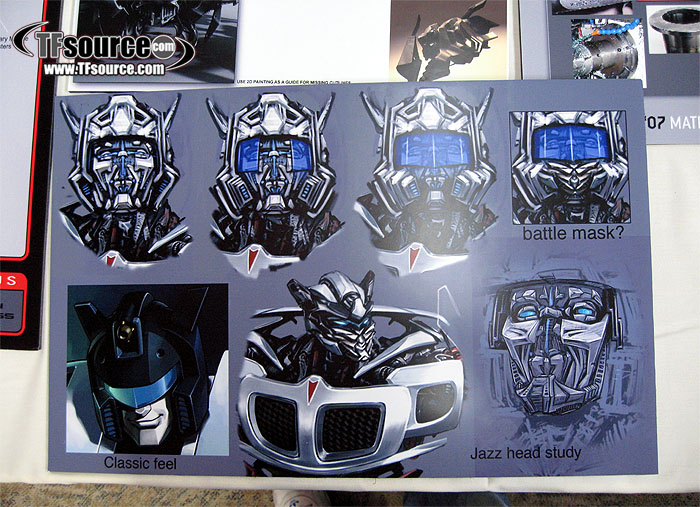 Character studies for the Movie 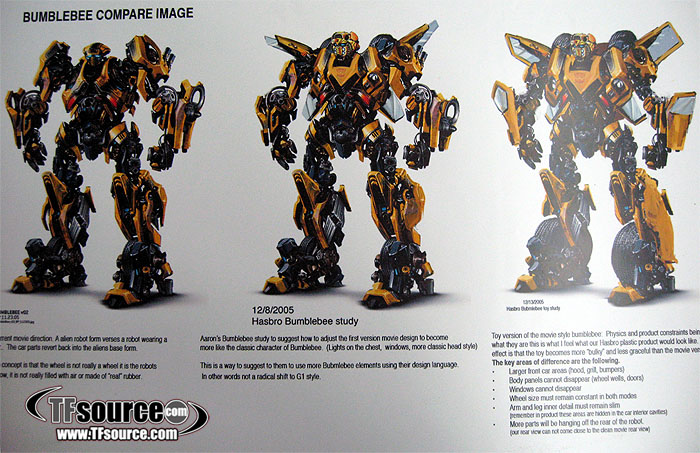 Evolution of a hero

Since the live action movies were the flavour of the month, much of Hasbro’s display material was centered around character studies and prototype toys related to the first live action feature film. These huge character boards showing concept images and drawings were something of a highlight. I had already seen the movie a few weeks before in London at an advanced screening so it was all incredibly revealing and fascinating. 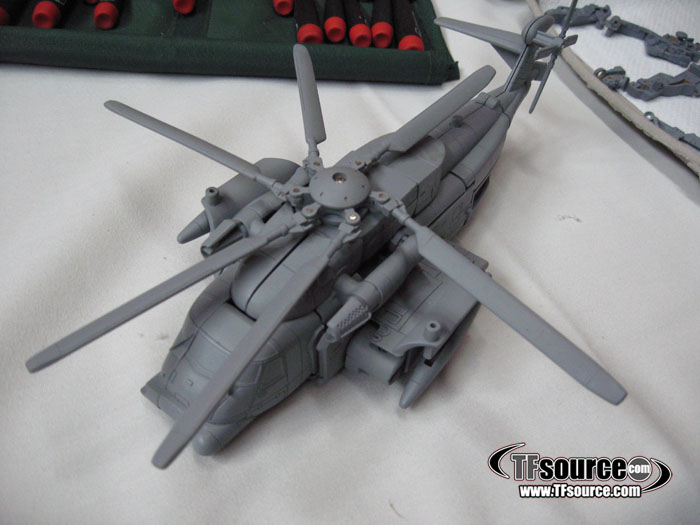 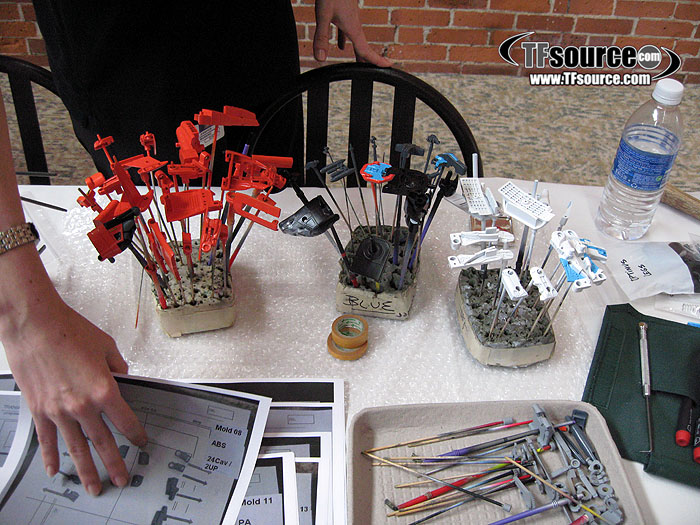 Being at a time when pre-production test shots and prototypes would sell illegally on eBay for hundreds of dollars, to be surrounded by all those hand-painted hardcopy prototypes of upcoming movie toys seemed surreal, but that was soon replaced by the wonder of having each and every stage of the toy’s production explained by the able and friendly Hasbro staff who were on hand throughout the tour. The above pictures are of the pre-production voyager Blackout repaint “Evac” being mocked up by the staff.

An undeniably rare and unique occasion, the Hasbro tour topped off a wonderful weekend that overseas collectors like myself just cannot compare to local toy shows and conventions. Auto Assembly and B.O.T.S. are excellent events, but the scale of BotCon and the chance to come together and spend so much time with like-minded enthusiasts, seeing long-time online acquaintances from North America become genuine and real friends is a once-in-a-lifetime opportunity for some of us who now have many other priorities. Yes, there were geeks, odd-looking stereotypical weirdos, people dressed as robots and folks with questionable personal hygiene, but it’s BotCon, and I’d give anything to go again. 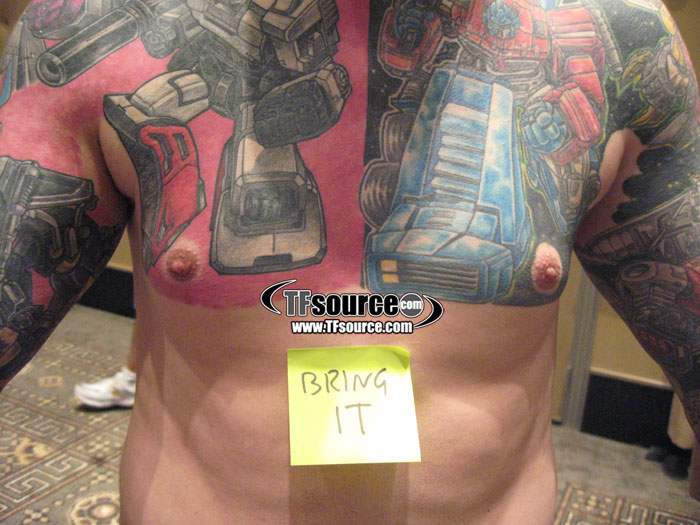 Do as the man says

The Shows Must Go On