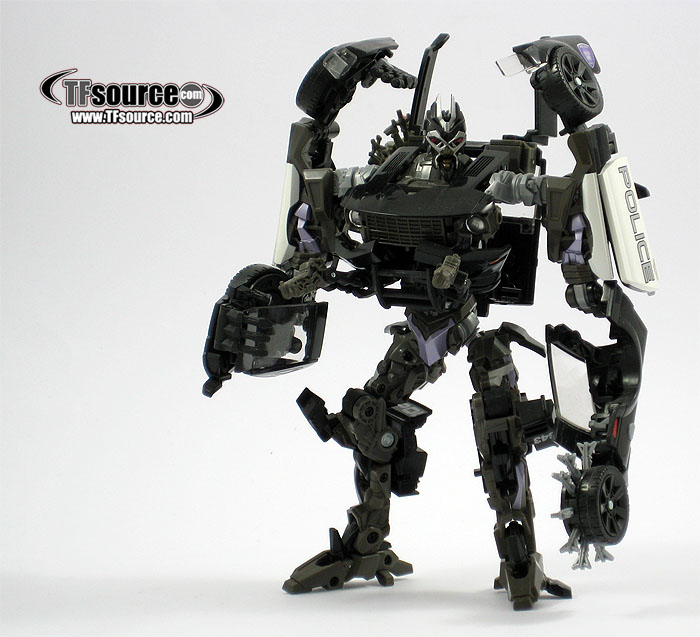 Take some desirable performance cars, add three blockbuster movies and a slew of “Big F***ing Robots”, toss in a healthy amount of character and screen accuracy topped off with a sprinkle of functional poseability, a few drops of the world’s attention and soak in the nostalgia of a G1 Transformers collector’s love for Autobot cars. What have you got? An instant hit, and my undivided attention.

One look at our Source Interviews with the knowledgeable and perceptive collectors we’ve had the pleasure of talking to, and you’ll be left in no doubt as to the impact on the collector’s market of Michael Bay’s live action Transformers features. A host of new fans have been added to the community, the waning interest of some long-time collectors may also have been re-ignited (certainly my own in 2007 to some degree). With more movies on the way, it seems as good a time as any to pay tribute to a small portion of the best figures to come out of the Movie-verse line of Transformers. 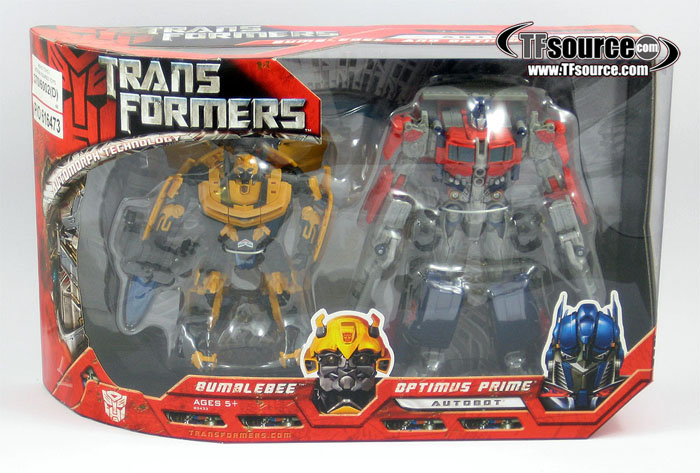 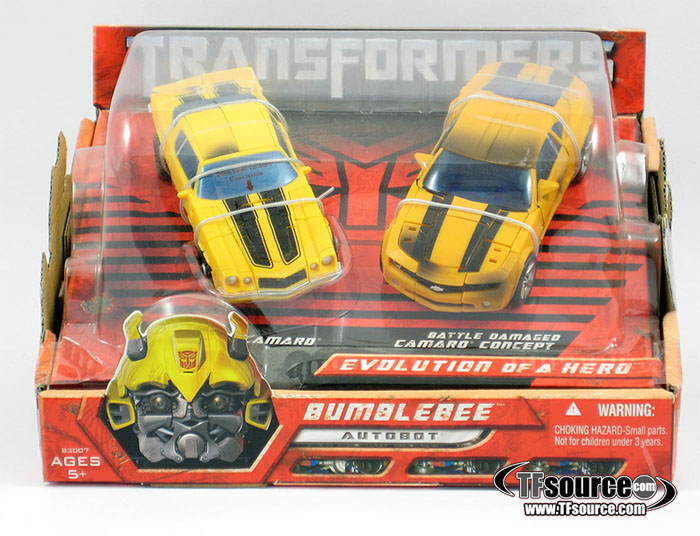 Evolution of a Hero Deluxe Bumblebee set - with battle damage

Now it hasn’t all been plain sailing for Hasbro and their endless stream of Movie product, parts of the fandom have been quite vocal about their distaste for the Movie designs, never mind the Movies themselves. I am not at all ashamed to admit that I thoroughly enjoyed seeing all three films at the cinema, and have seen each multiple times. I won’t vouch for their plot or script, but I enjoyed the robot action, the soundtrack and the thrills. I also approved of the robot designs and had a Movie collection of my own. 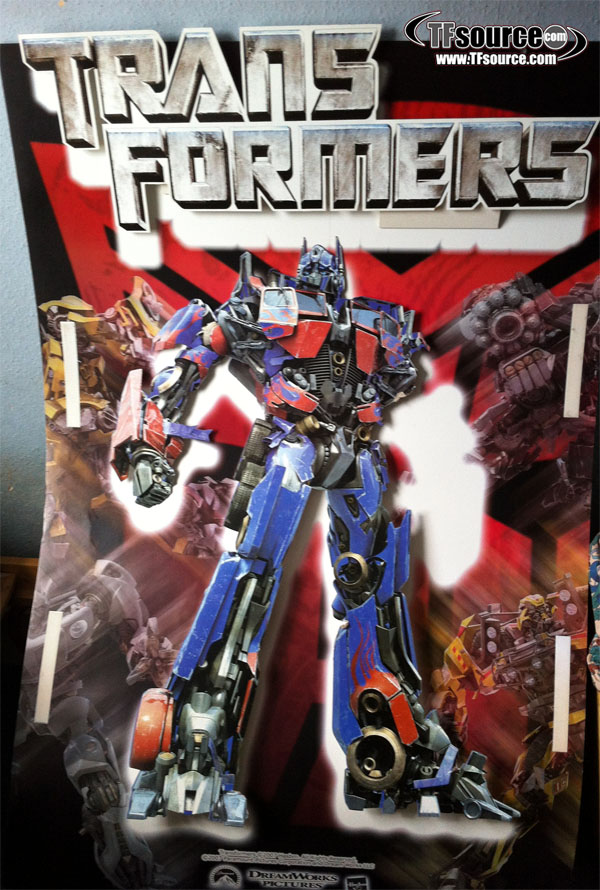 I certainly tried my best to keep up with everything that came out in 2007, including the US store exclusive giftsets above which made their way to UK chains, a number of repaints like leader class Nightwatch Optimus Prime, Thundercracker, Rescue Ratchet and Final Battle Jazz, stacks of Legends figures, absolutely anything Barricade-related, some Premium figures when I visited Iceland the following year and even gigantic store displays. 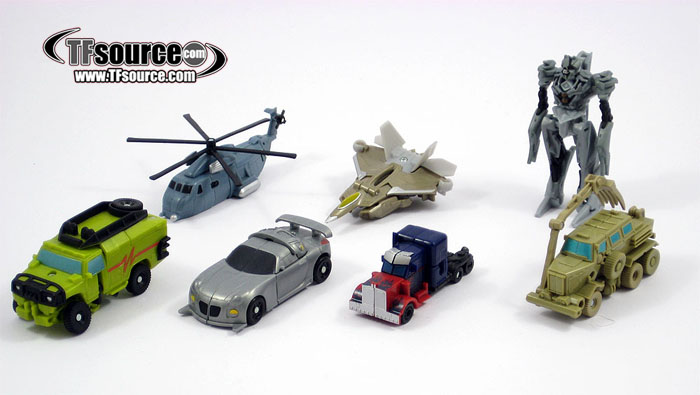 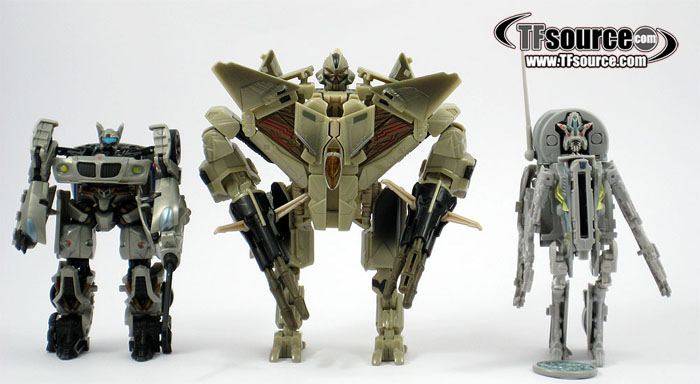 The deluxe renditions of Jazz, Barricade and Bumblebee were nice enough for display and had good play value, but they were never highly show accurate enough for me nor were they particularly complex, but the voyager toys and leader toys showed a higher degree of ingenuity and made for some quality toys, leaders Prime and Brawl being rather good examples. While I missed the boat on most of the Revenge of the Fallen toys, I couldn’t resist the opportunity to pick up a deluxe Sideswipe and more Legends toys for a future Movie display that never really happened.

Despite a tour of the Hasbro facilities during BotCon 2007 demonstrating just how much love and intricacy was going into the toys being produced and how ambitious some of the prototypes were, there was always a feeling that more should be done with Movie toys, something along the lines of Takara’s magnificent Masterpiece line and not a million miles away from the successful Binaltech/Alternators toys. Hasbro’s Human Alliance range first offered during the Revenge of the Fallen waves, and later Dark of the Moon, were the toys I was waiting for…

Boasting beautiful and accurate vehicle modes of a size comparable with Binaltech’s 1:24 scale toys, popular Movie characters, suitably complex (but not soul destroying) transformations and even human companions from the films, this range of Movie figures started to elicit the same kind of excitement in me for new toys that Binaltech had done.

And I cannot lie

Attractive road cars were such a huge part of the movies, so to have them portrayed so well in these relatively expensive items made them very appealing. But, even Movie deluxes had great vehicle modes, what figures like Human Alliance Bumblebee and Sideswipe had were more Movie-accurate robot modes with fewer compromises. I didn’t care greatly for the human action figures, but their addition doesn’t detract from the toys at all. 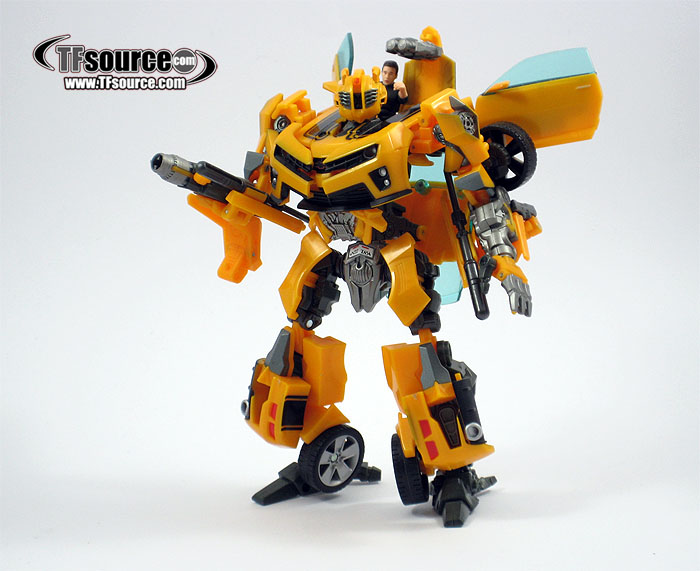 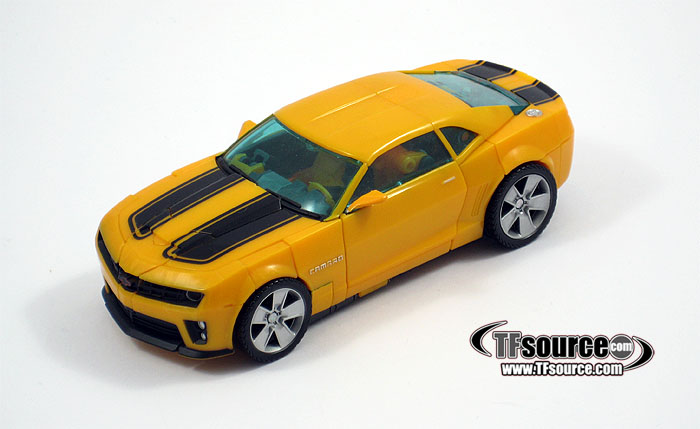 And how nice it was to be able to pose Movie Bumblebee how I wanted, with a battle mask that did not require the purchase of a separate figure! I would have preferred it if Bumblebee had his right hand included as an exchangeable accessory  instead of the fixed launcher weapon he comes with, but it was far from a deal-breaker. The feet are probably the least Movie-accurate part, but this was without a doubt the most enjoyable and impressive Hasbro toy I had bought in recent years, matched only by Alternators Smokescreen and Mirage. 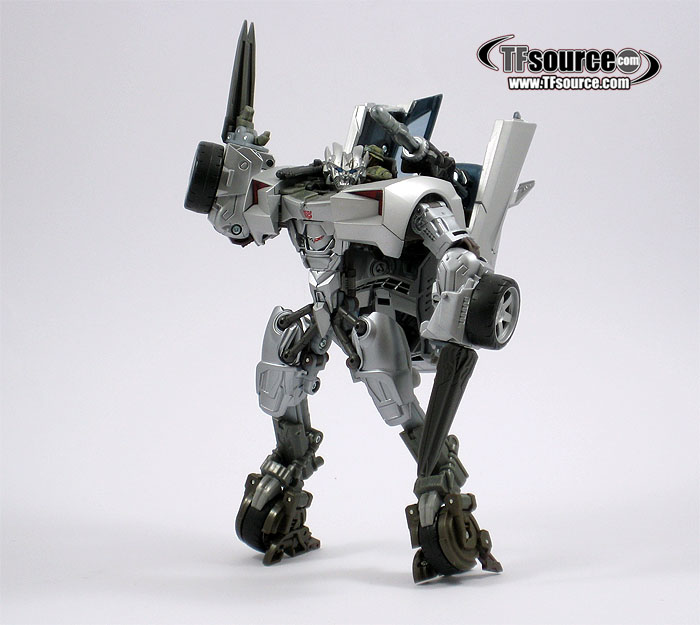 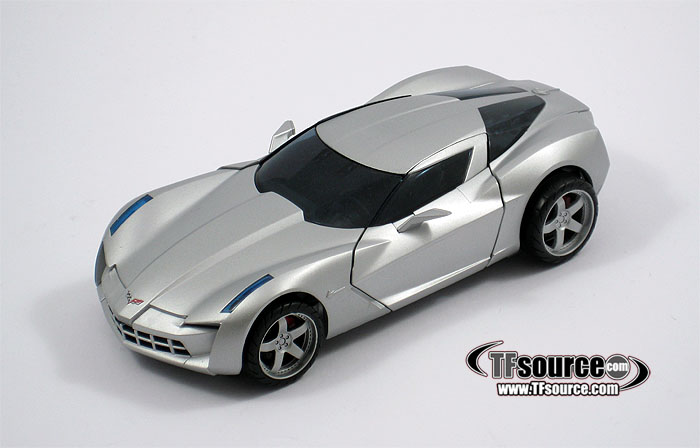 It didn’t take me long to find space for the gorgeous Human Alliance Sideswipe in my collection having enjoyed Bumblebee so much. I was initially put off , though, by the stock images used by Hasbro for this figure. It seemed stumpy, ill-proportioned and a waste of an opportunity to improve significantly on the already-excellent deluxe ROTF Sideswipe. As with Bumblebee, online galleries of in-hand production specimens soon convinced me that Hasbro’s photoshoot department needed more intense briefing on how to display and transform up-and-coming headline toys. When transformed correctly, HA Sideswipe is another roaring success, even with his mass of kibble. The Cybertronian tattoo on his face is a lovely touch too. 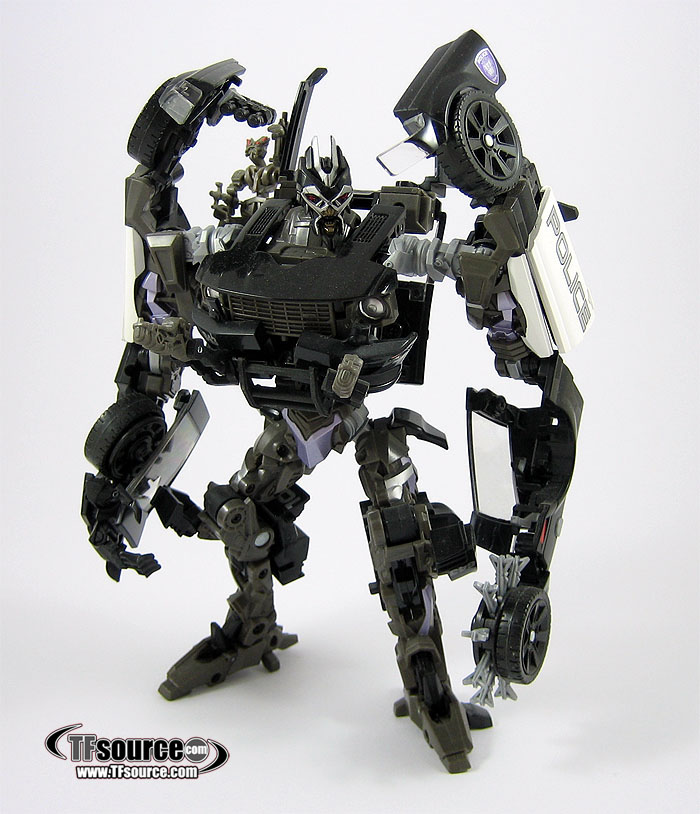 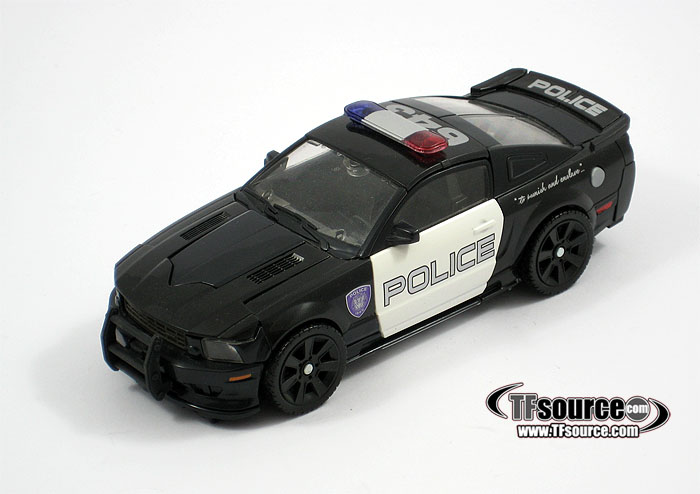 Any fleeting regrets about Hasbro introducing Human Alliance figures after the first movie were abandoned once Barricade and Jazz were announced. Two of the best-looking robots and cars from the first film were to be immortalised in Human Alliance style. Once more, with Barricade, the pre-release stock photography did him no justice at all. I almost missed the chance to pick this figure up, such is its rarity, but a friend’s trip to the US coincided nicely with my birthday and here he is in all his beefy evil glory. This toy has recently been bootlegged, but it won’t take you long to recognise the difference in quality between the authentic Hasbro figure and its KO, that was my impression anyway.  This is by quite a long way the very best incarnation of Movie Barricade ever released. 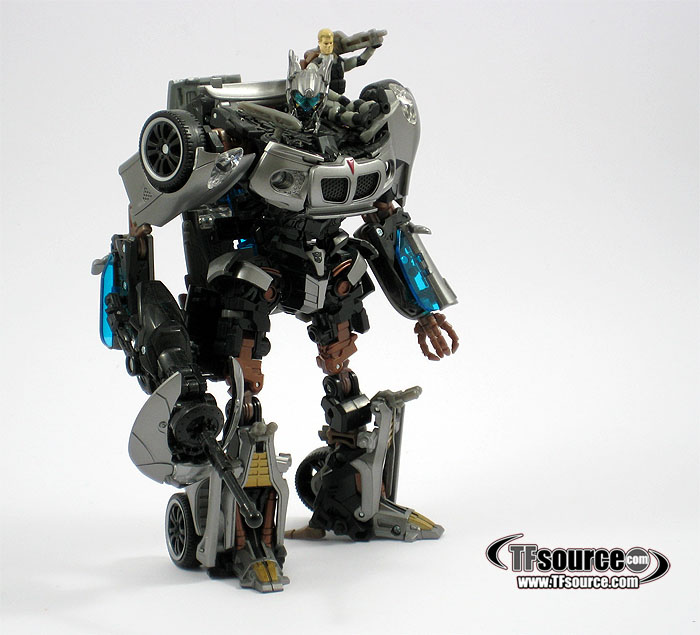 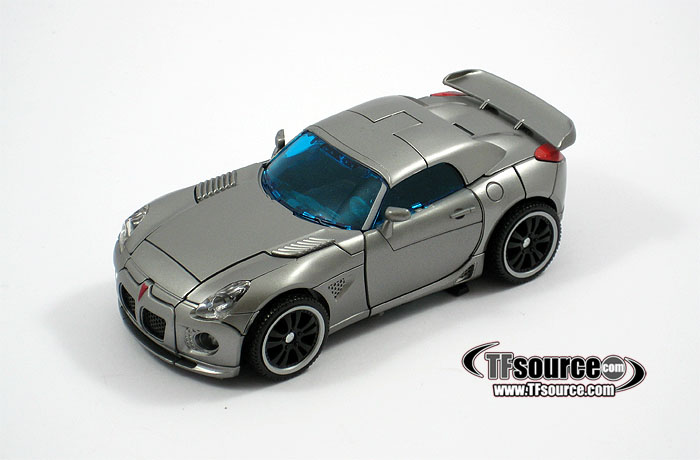 It is quite possible that Jazz was the pinnacle of what Hasbro achieved with Human Alliance. When you compare this toy’s vehicle and robot mode to the deluxe version from the first movie, it’s simply amazing what has been achieved. A stunning robot mode with a magnificent head sculpt and a lovely combination of silver, black and translucent blue. This is the kind of figure that non-collectors stop and admire when it’s on display. What an absolute and undeniable triumph.

I don’t care much for the transforming motorcycle that accompanies Jazz, but its inclusion is justified purely due to the display value it adds to the robot mode as a shield/weapon. 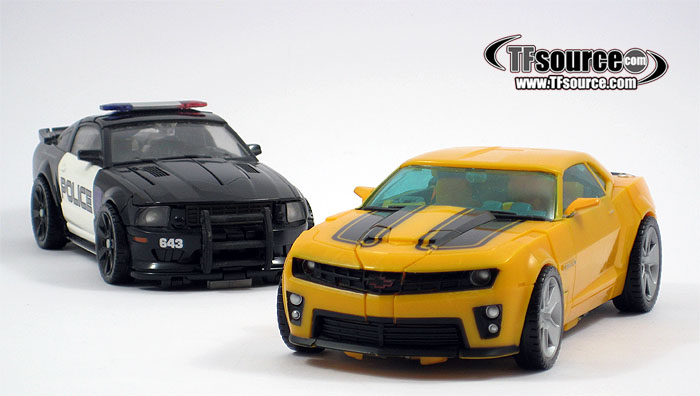 The common scale, small companions and improved poseability of the Human Alliance figures compared to their deluxe class predecessors made it much easier to recreate iconic scenes and sequences from the movies, or just to display your favourite movie characters dynamically and with a bit more style. I found that they weren’t that horribly out of scale with a leader class Movie Prime either. 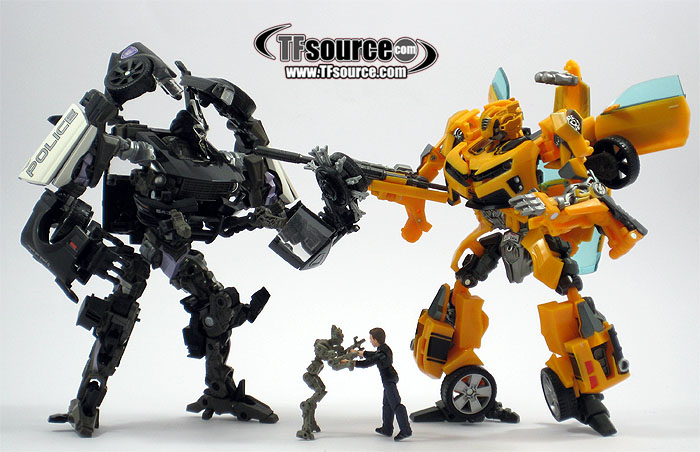 One of the absolute nicest things about collecting Movie toys for the few years that I did was the ability to get them locally, and this is quite a big deal for a non-US collector I can tell you! After years of buying from collectors or online auctions, walking into a very local toy shop and finding a shiny new toy I actually needed for my collection was a truly novel experience. 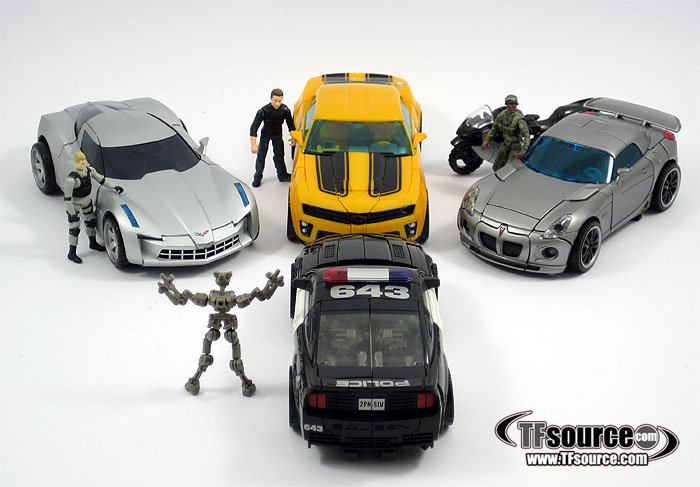 Not from the movie

It is for this reason that I become endlessly annoyed by the idea of having to ‘hunt’ for current and new toys due to poor distribution, exclusivity or scalping. I had enough experience of hunting and searching for things I needed/wanted through collecting G1 and Diaclone, that has never been part of the appeal of collecting for me. The appeal has always been the toys themselves, the privilege of enjoying them, displaying them, photographing them and transforming them. These mini-masterpieces tick all of those boxes, and it is for no small reason that these Human Alliance toys have survived every collection purge, re-focusing and ‘streamlining’ my collection has suffered over the years. They are just that good. 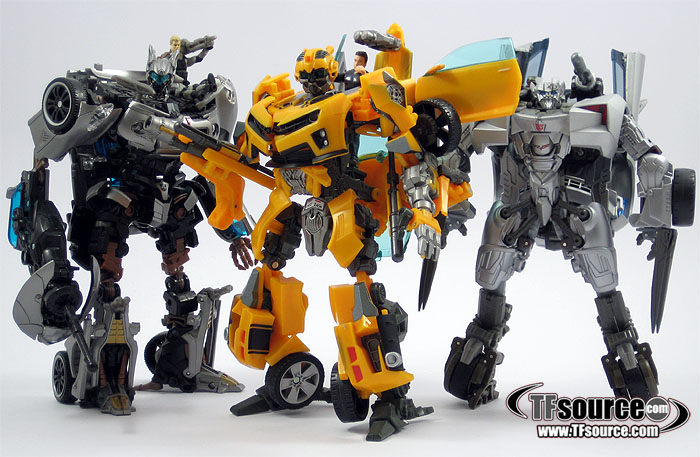 Sell us, we dare you.