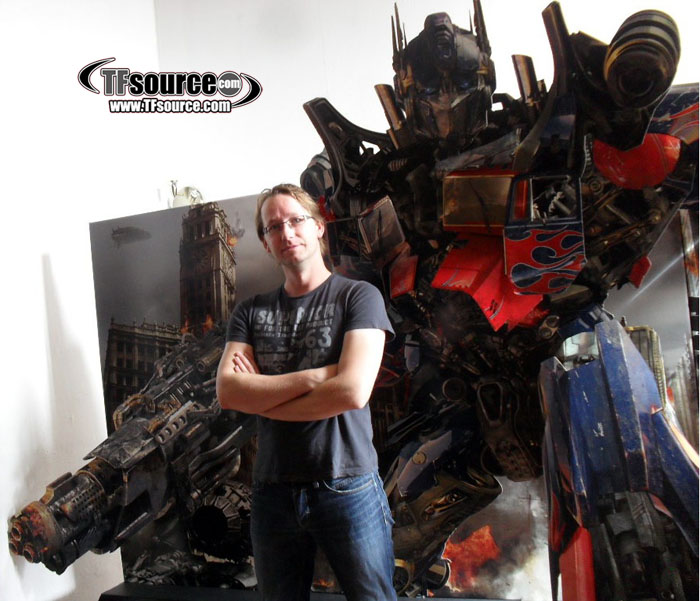 September sees us press on with our collector interview series, however this month we spotlight a Dutch Transformers and pre-Transformers collector who is slightly less active in the online community than our previous interviewees, but whose collection does all the talking for him. With a very significant selection of pre-production and prototype gems from the world of Transformers toys, comics and cartoons, we believe you’ll enjoy his perceptive observations and fascinating experiences in toy collecting. It’s time we all gave this incredible collector the recognition he deserves… 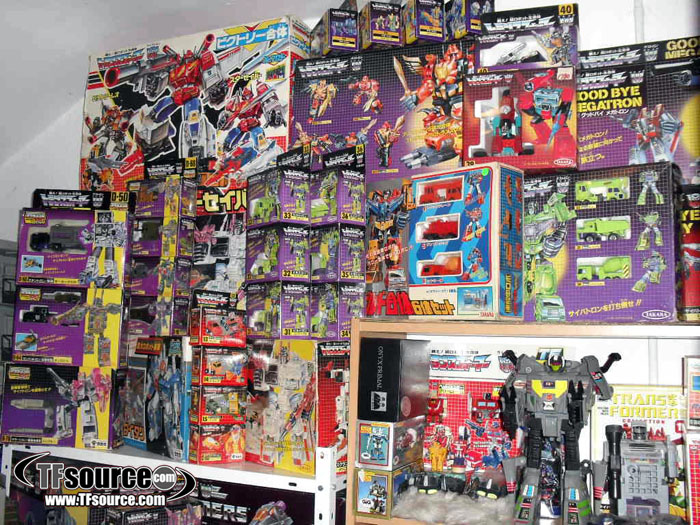 Straight into the Japanese exclusives, giftsets and Diaclones

Marco van Leeuwen, assistant professor at a university in The Netherlands. My main collection focus is G1, in particular the first few years worth of assortments in Japanese boxes and Japanese exclusives from the rest of G1. In addition, pre-production items like original comic art, animation cels, prototypes and other paperwork. I also have a few Lucky Draws and store and cinema displays. 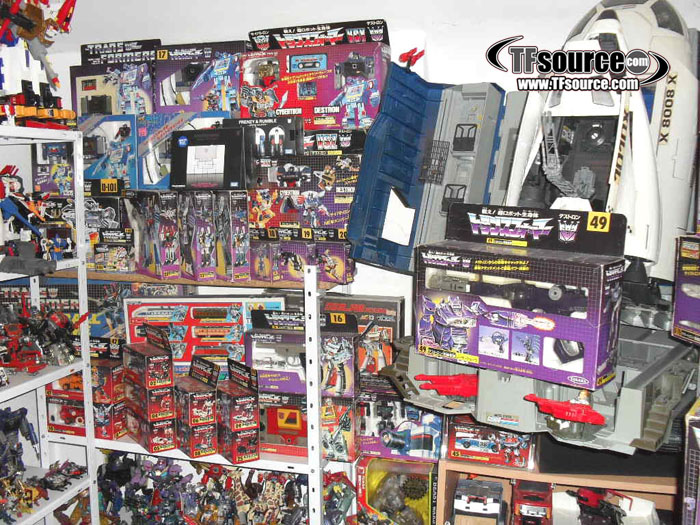 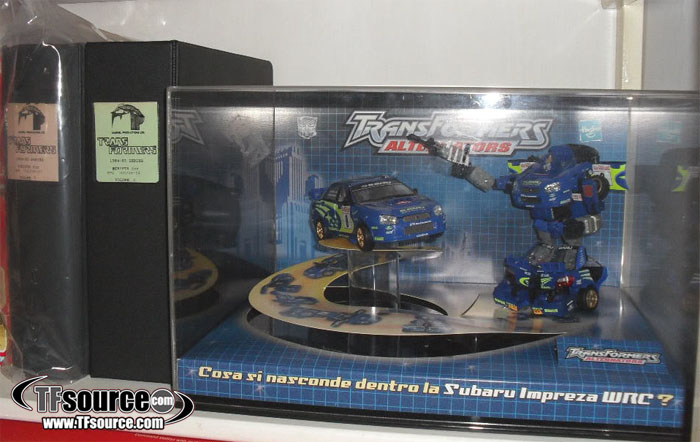 Alternators Smokescreen store display, and some special stuff next to it

The rapid expansion and globalization of eBay has increased access to difficult-to-obtain items, and the success of the live-action films has brought many new people into the hobby. That combination has caused a tremendous rise in prices, but also a much greater variety of sources to choose from. The best aspect is the improvement of interaction possibilities. When I first got online in 1994, the USENET group alt.toys.transformers was all there was. Fun, but mainly text-based, so when someone offered me a complete, mint Fortress Maximus for US$90, I refused. Yes, I can hear the entire Internet groaning, but you have to understand that Fort Max (like many other guys, including Omega Supreme, Predaking and Swoop) had never been available in Dutch stores. I knew the character from the ‘The Rebirth’ cartoon and the comic, but that there was even a toy was a big shock to me when I first learnt about it in 1994. So, in all my naiveté, never having seen one and only having text descriptions to base my decision on, I thought this was a Metroplex-sized toy, and paying twice Metroplex’s retail price for it sounded rather daft. That’s all different now, with spy images of new toys leaking out months before release, extensive reviews of the rarest of the rare available if you look hard enough, and ample opportunities to exchange info and war stories with other collectors. 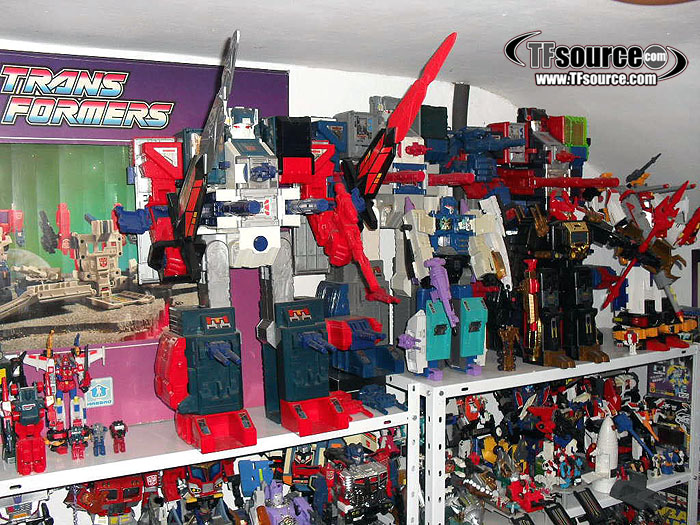 Marco's more than made up for that missed Maximus

I expect G1 to continue to be popular and expensive, but we’ll probably see the people who grew up with Optimus Primal rather than Optimus Prime and Sky-Byte rather than Starscream entering the marketplace with their first adult paychecks, influencing the dynamics of the marketplace accordingly. You can already see the choices in BotCon toy sets reflecting the increased interest in post-G1 series. As long as the movies and the supporting cartoon shows remain popular, we’ll continue seeing high prices for the older stuff. In terms of new series, I’m sure Hasbro/Takara will continue coming up with new lines for years, perhaps even decades to come – but I do hope at some point they’ll want to stop completely rebooting the mythos with every new series, and retelling ‘More than Meets the Eye’ in the first few episodes. 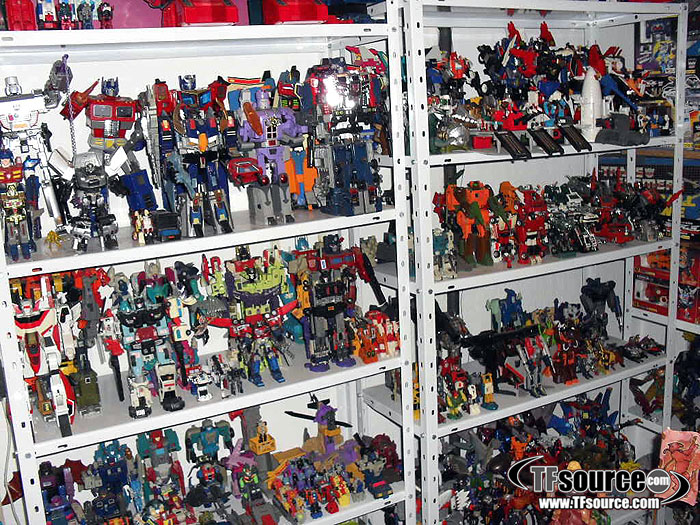 All the bases are covered in this collection, literally

I would say the set of hardcopy prototypes of the 1985 Minibots (Seaspray, Warpath, Cosmos, Powerglide and Beachcomber). I definitely paid a healthy price for them, but it was all worth it. They were used as intermediate stages in the toy design process. They are made from resin rather than plastic, are hand-painted and are significantly different than the final versions that ended up on store shelves. The idea that the toys that so many people bought and enjoyed back during the heyday of the brand (or at least the first of several heydays) were based on the very items I have in my collection is quite a special feeling. Furthermore, Seaspray was the first Transformers toy I ever bought and Warpath my second, so that makes it extra special to own their prototypes. Before I got Seaspray I already had two or three knock-off Go-Bots – not even authentic ones! – and I can still hear my mother, none too pleased with this senseless waste of plastic and allowance money, saying ‘This is the last one, right?’. I guess I must have crossed my fingers behind my back as I muttered ‘Yes, mom…’. Here we are, 27 years later, and I’m still afflicted with a serious case of nostalgic deformation. 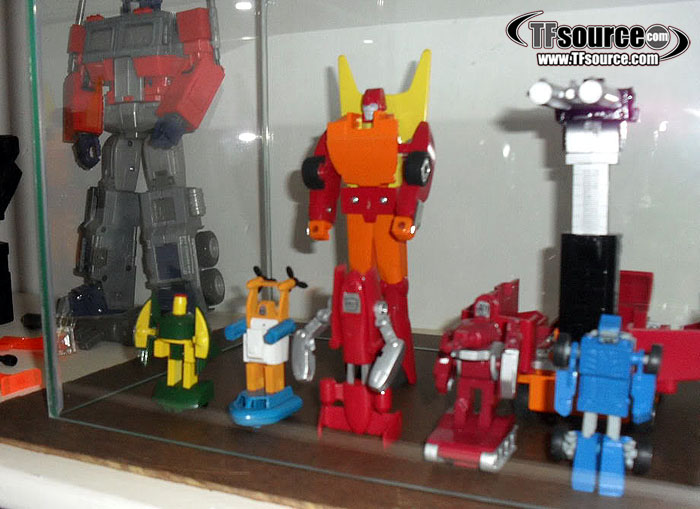 Well, the ‘million Dollar toy auction’ of a woman selling her deceased husband’s Transformers collection a few years back. I believe it ended up selling for around US$50,000, which is not quite a million, but still one heck of a lot of cash. 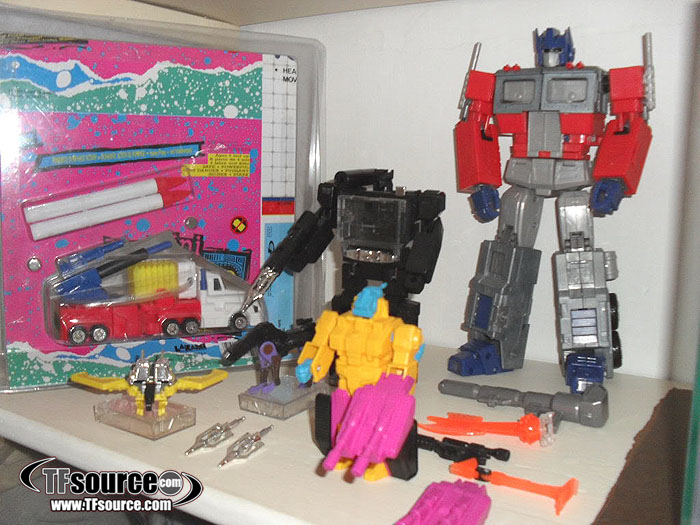 Can I pick five? In my head, they belong together as a set… I’m thinking of the hardcopy prototypes of the 1985 Minibots mentioned above. They’re so cute! 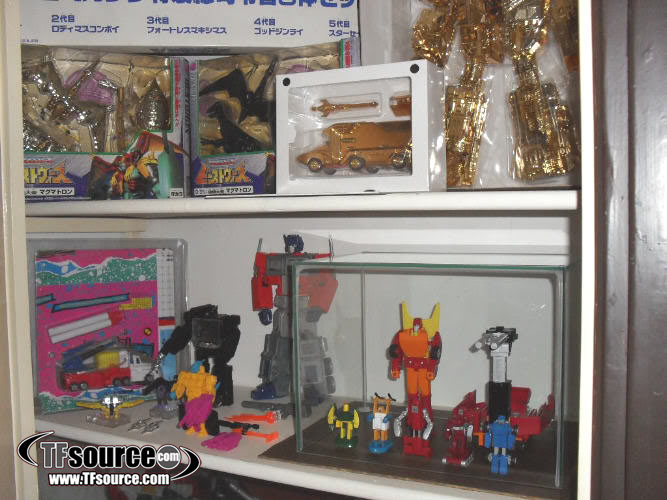 The Beast Wars Neo Unicron prototype, or one of the original 1986 Movie Unicron protos would be my picks – the former because it looked to be a an excellent toy, the latter because it represents a very important phase in The Transformers’ early history.

Or, also a true holy grail: the back-of-the-box art for (especially) 1985, or 1986, both of which were created by Jeffrey Mangiat. The ’86 painting was available briefly on eBay a few years back, offered by Mr Mangiat’s son, but apparently on second thought he found it difficult to part with the piece. I can definitely understand that: both the ’85 and ’86 paintings are truly beautiful, each an integral part of the mid-1980’s Transformers experience of many thousands of kids all over the world. You want something like that ending up at a good home… 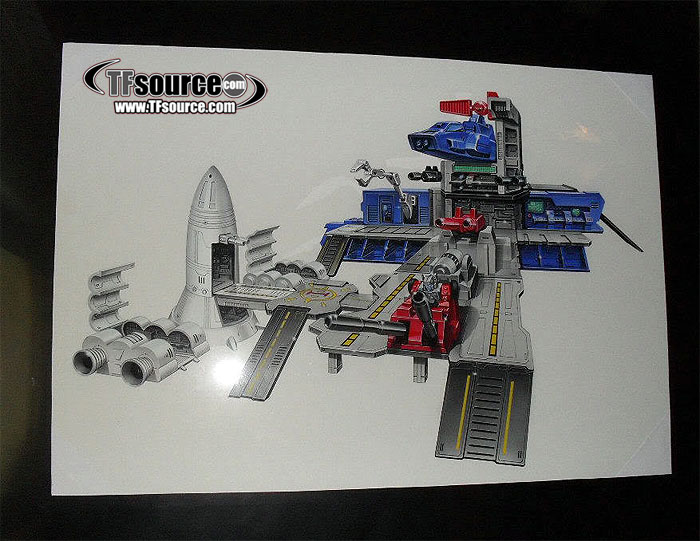 Buy what you like. Don’t try to be a completist, because with a 28-year history of the brand, different sub-lines all over the world, many of the prize items from that history being prohibitively expensive and so much new product coming out all the time, us mere mortals with normal paychecks can never hope to own everything. Also, buying toys as investments is a very tricky business, so unless you’re really in it for the long haul there’s no reason to bet the farm on something like that. Buy the characters or the sub-lines that get you excited *as a collector*. If what tickles your fancy is the 1984-1986 catalogue, or prototypes, or pre-production art (or all of the above), that could still turn out to be quite an expensive preference, but at least you’ll be hunting the items that make you happy (rather than the items that you *hope* will get you the money that might make you happy…). Oh, and in general: be nice to the people you deal with. Apart from making your transactions all the more pleasant, this could also help you improve your network, possibly helping you obtain that desirable item down the line. 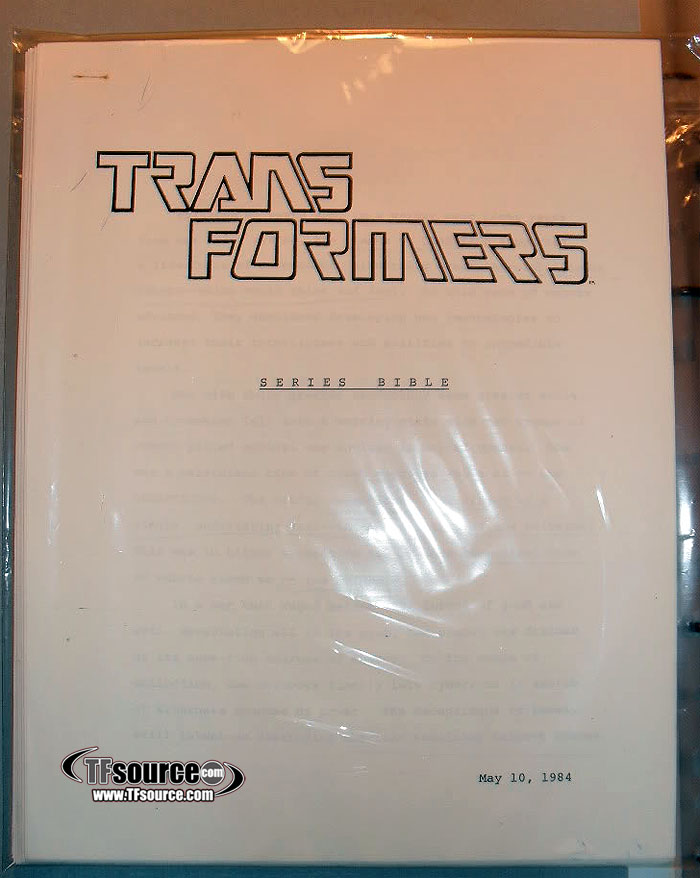 Wise words from the man who owns The Bible 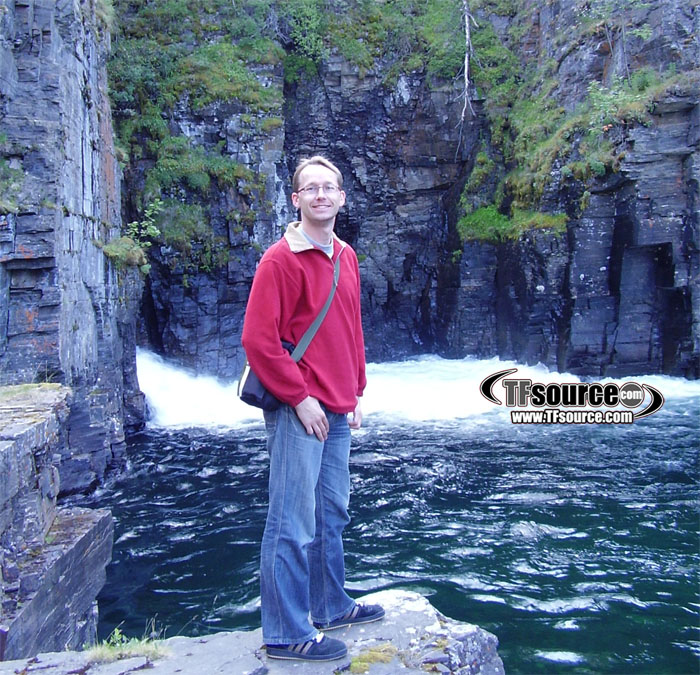 Some of us do leave our toy rooms occasionally

Many kind and gracious thanks to Marco van Leeuwen for words and photographs.