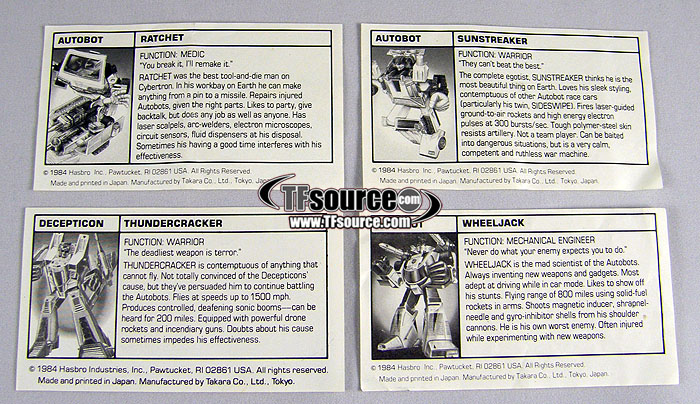 “I never had that one as a kid!” Many collectors will tell you that their first foray into adult toy buying was fuelled by a potent mixture of nostalgia and freshly discovered freedom or disposable income. Whatever came next can be blamed on obsessive behaviour and all manner of other excuses! It’s one thing to buy all the toys our parents denied us in the stores from the ’80s, it’s quite another to fill in the gaps left by mail-order exclusive characters available by clipping, saving and then redeeming Robot Points found on the backs of Transformers packaging.

Personally, joining the online collecting community was the first opportunity I ever had to see the mail-away toys from G1 having collected the promotional flyers or Robot Points as a child. I had never redeemed any of the Points I had clipped and I never knew anyone who had owned the toys offered. Seeing a G1 Reflector, a set of Omnibots or a Time Warrior watch for the first time was a momentous occasion. This 2-part series will highlight a few of the available mail-away G1 toys from the 80s in the US and Canada first of all, and then in Japan and Europe too, in no specific order. 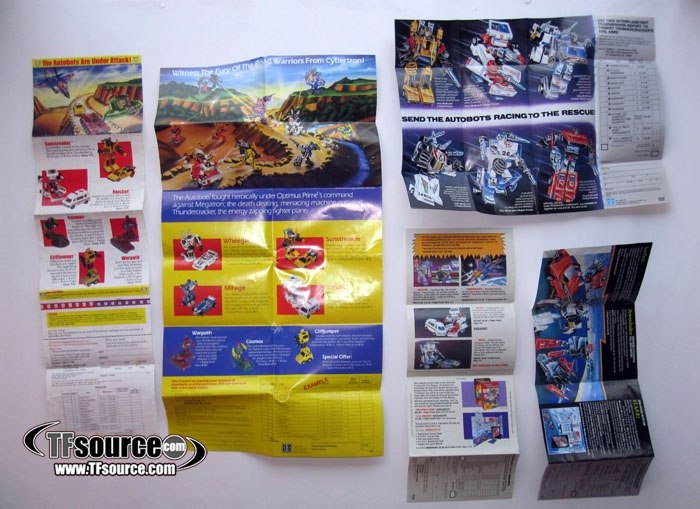 Not all G1 Transformers were available through mail-order, just a select few. So if you could not find a Bluestreak at retail in the 80s, you were somewhat out of luck. A small selection of Autobot cars like Mirage, Wheeljack, Sunstreaker and Ratchet were available though, as were Thundercracker, Cosmos, Warpath and Cliffjumper, as you can see from the flyers above. 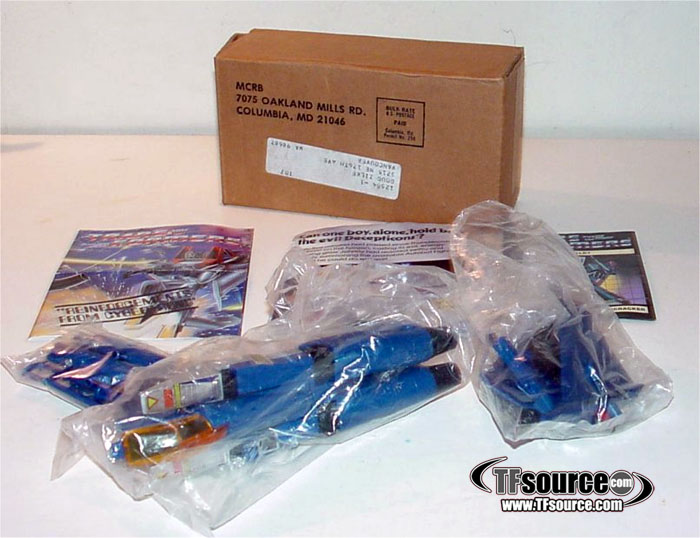 Mail-away Thundercracker and his mailer box and contents 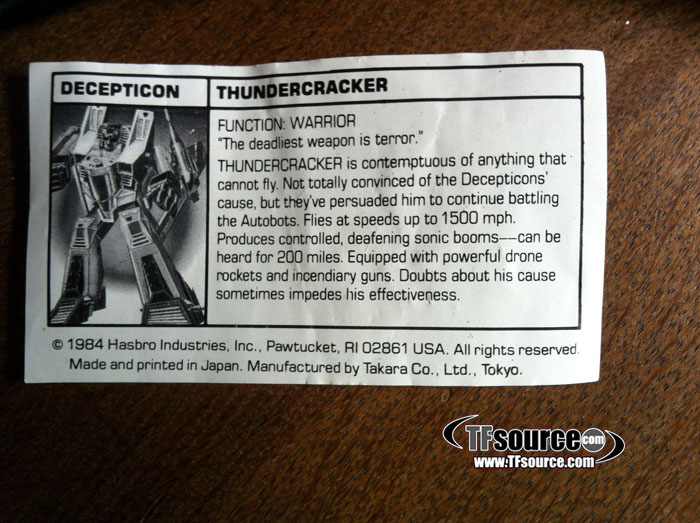 The larger G1 mail-away larger figures did not come with their traditional Hasbro outer packaging though, they were sent in non-descript brown Hasbro mailer boxes containing the toy, accessories, instructions, catalogue and most interestingly, a black and white paper tech spec. This tech spec did not feature an attribute graph (or translucent red tech spec decoder) since those were usually an integral part of the colourful outer packaging used at retail, but at least they sent something about the character, and when you consider the significance of nostalgia, the character may well have been 75% of the equation for the original recipient.

One G1 car not seen in the above paperwork is Jazz, who was offered as part of a Cookie Crisp promotion in what must have been mid-to-late 1985. 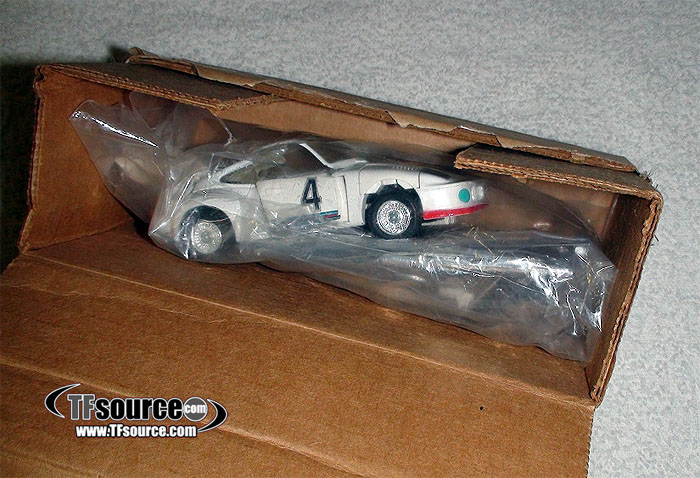 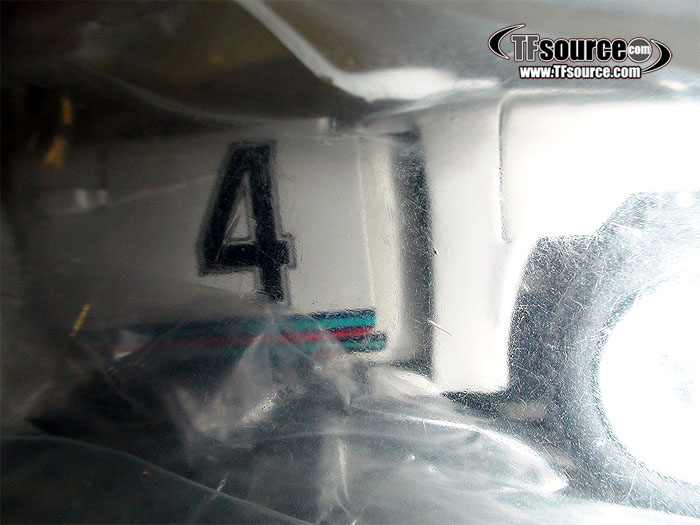 Now for a while any Jazz that showed up without the “Martinii” on the doors was thought to be part of the Cookie Crisp promotion, but the fact is that at some point in 1985, Hasbro stopped using the faux-Martini sponsor logos on the sides of the Porsche 935 Turbo-inspired Autobot Jazz toy, and all releases of this figure reflected that change. The above pictured Jazz, however, appears to be a genuine promotional mail-away Cookie Crisp Jazz due to its mailer box (and seeming lack of Jazz ever being offered as a standard Hasbro mail-away?), and its owner made a very astute observation: “One cool thing about this piece is that it is one of the very first Cookie Crisp Jazzes produced. On later pieces in the run they put on one set of no-logo stickers on the doors, but on the earliest ones you can tell that they covered the stickers on a regular production Jazz with an extra set of no-logo door stickers. You can see the doubled up stickers on the close-up shot.” 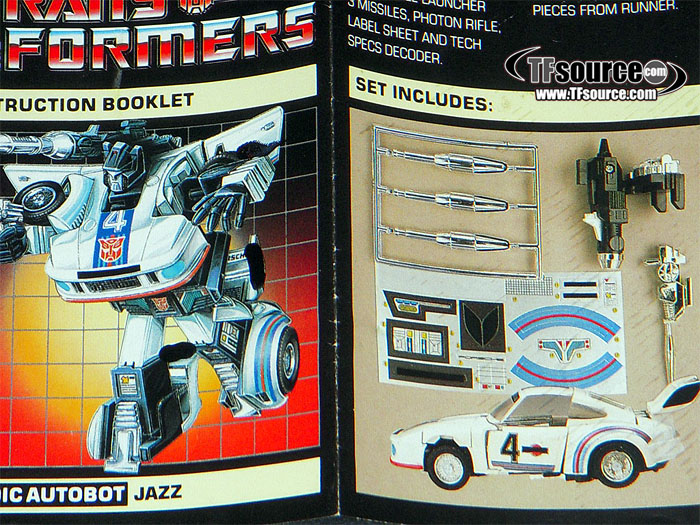 Backing up that early censoring of Martini and Porsche labels, the Cookie Crisp Jazz instruction booklet has manually blacked-out sections where those aforementioned decals would have been prominently displayed on the artwork and stock photography. It would be interesting to see if a later Cookie Crisp mail-away had a corrected instruction booklet, you would expect it to if the corrected single-layer stickers of later versions are any indication.

Sticking with standard-release toys that were also available as mail-aways, the aforementioned minibots Cliffjumper (looks a lot like it'[s a Hubcap, no?), Warpath and Cosmos were offered in Canada too but with instruction booklets. This is thought to be exclusive to Canada, but to be honest I’ve never seen a set of untouched US mail-away minibots to compare. The instruction booklets are the best feature here by far, and you can see that they are bilingual French/English as covered in the Canadian G1 Transformers article a couple of weeks back. 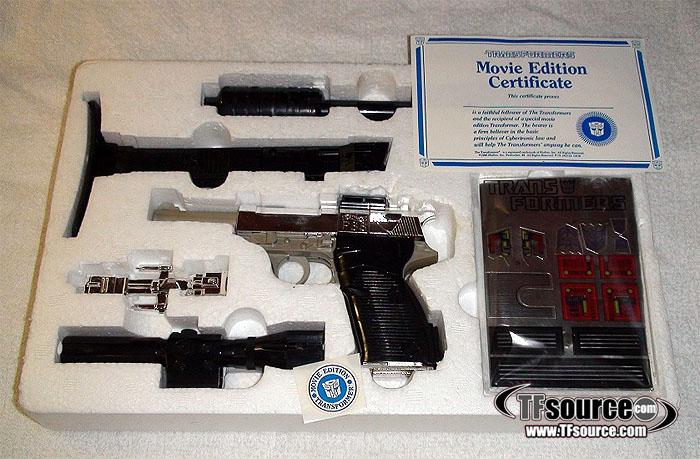 Optimus Prime and Megatron were also offered as mail-away Transformers in 1986 to commemorate the release of the animated Transformers movie. These figures were again sent in brown mailer boxes but featured the proper styrofoam insert and even a Movie Edition Certificate. Of all the mail-away G1 mentioned, these fetch the highest prices at auction in my experience, especially unused.

So far we’ve not seen anything previously unavailable in North American stores, but as we move onto the toys that were exclusive to the mail-away offers on that continent, things begin to get more interesting. 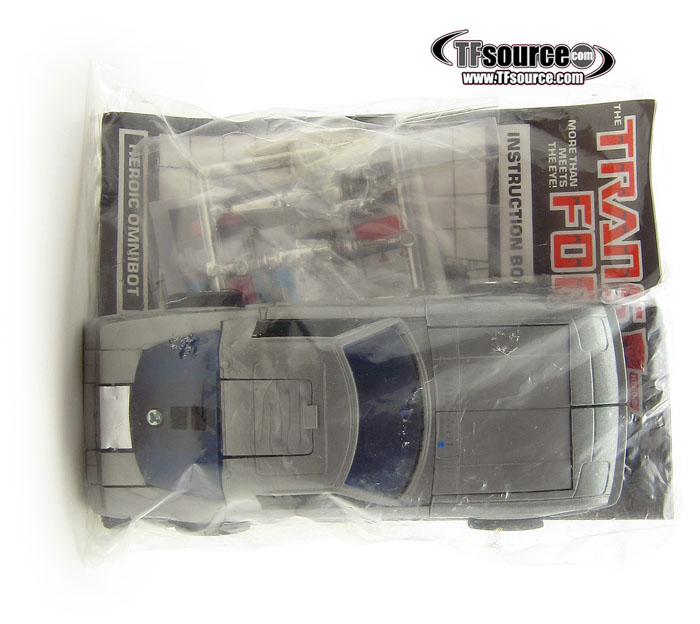 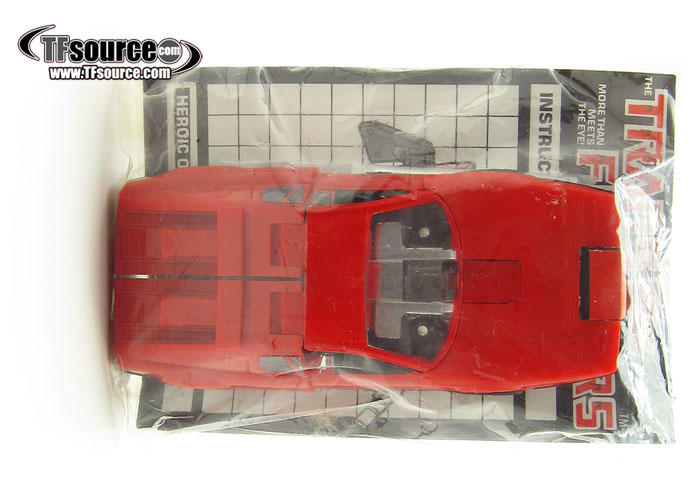 The Omnibots were basically Transformers versions of the Diaclone double changers Mazda Savanna RX-7 (Camshaft), Toyota Celica XX (Downshift) and Ferrari 512BB (Overdrive). These lovely figures were clearly popular with spec-clippers as they can regularly be found on the second-hand market, and were also available to Canadian customers too as evidenced by this sealed bilingual Downshift: 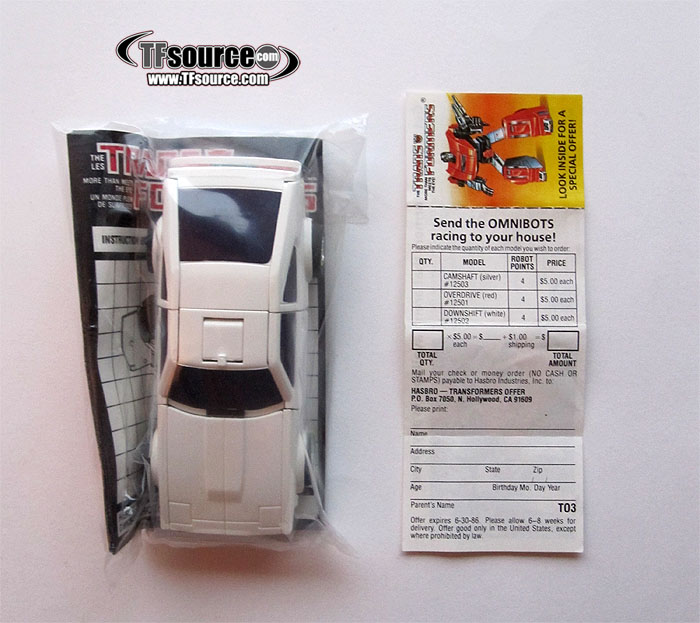 The order form is great to see as well, showing clearly that $5.00 was the price of each figure, as long as you had 4 Robot Points to spare. I remember clearly at BotCon 2006, legendary collectors and founders of BotCon the Hartman brothers, sold a set of 3 Omnibots in a brown mailer box to a friend of mine. I do wonder if Hasbro were sending them in a bespoke larger mailer box if someone ordered all 3 simultaneously. Anyway, here they are in all their glory:

Another fantastic item I remember seeing in promotional paperwork throughout my childhood was the Autobot Time Warrior watch, again, available through a Robot Points promotion in 1984/5 depending on location. 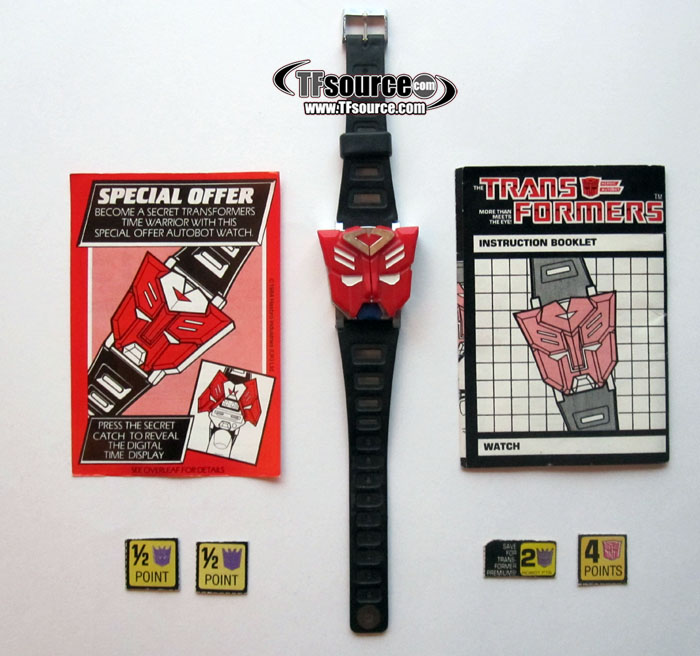 In the picture above you can see a UK promotional flyer for the Time Warrior, samples of Robot Points, the gorgeous watch itself featuring the split Autobot logo watch face and even an instruction booklet. What a brilliant collector’s item; attractive, functional, laced with style and desirability and even sporting appropriately displayable paperwork. We’ll look more at this item next week, but let me close with what I consider to be the crown jewel of mail-away G1…

$10.00 plus 2 Robot Points, what an absolute bargain for what was not only one of the very best Japanese Micro Change Series moulds, but also a superb G1 Transformer and character from the animated pilot, the Evil Decepticon camera “Reflector”. While this toy was available in stores in Japan as 21 Reflector with exclusive artwork, in North America he was exclusively a mail-away.

The now-mercilessly counterfeited Reflector was made of the three robots “Spectro”, “Viewfinder” and “Spyglass”. The mailer box (also counterfeited) was relatively unique and it came with a full-size paper tech spec and instruction booklet all in one, and the styro insert was straight out of Micro Change. It was almost cruel that Reflector, so heavily featured in the 3-part animated pilot “More Than Meets The Eye”, would be so difficult to get. Not only was it 3 separate figures and a mail-away, but a character that people would have formed an attachment to even though the animation model barely resembled the toy. And what a lovely toy it was, making it that much more painful to miss out on!

As difficult and rare these things might have been back in the day, growing up in the UK meant most of the nicer mail-away G1 exclusives were completely out of reach. Joining the online collecting community, there were many amazing surprises in those early years, things like Sharkticon Gnaw having its own release, Pepsi Optimus Prime etc, but the mailaway G1 Omnibots and Reflector were some of the most pleasant surprises of the lot, and picking up those toys was one of my first priorities. I may have missed out on the nostalgic childhood aspect of these mail-aways, but I more than made up for it when I finally bought those figures I could never have had “when I was a kid”. 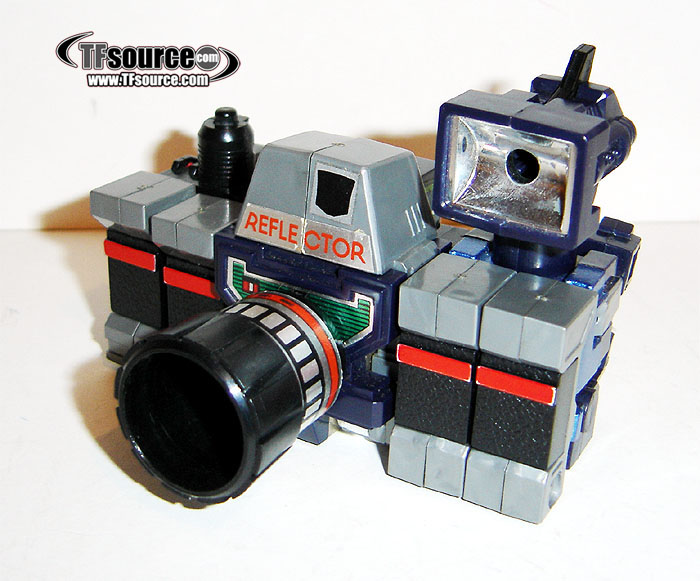