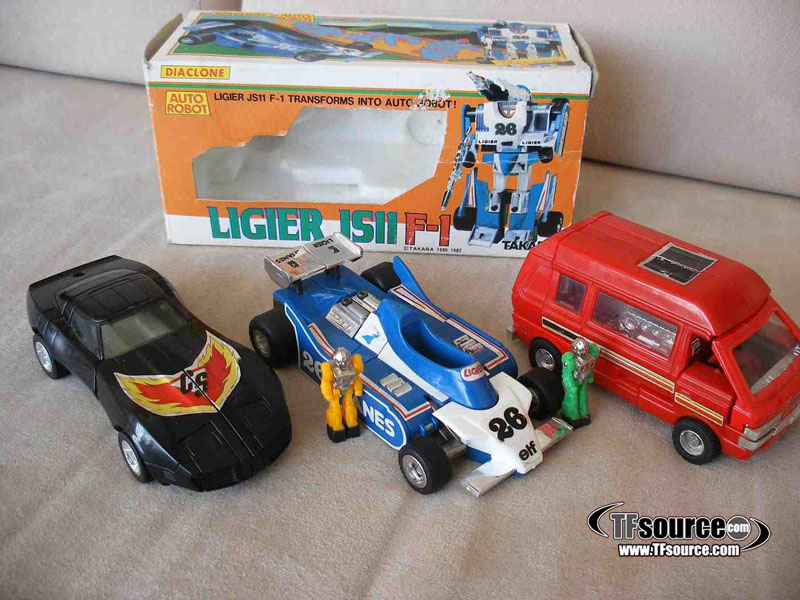 Finland, famous for arctic weather, Lapland, death metal, heavy drinking, Formula 1 World Champions and some of the greatest rally drivers the world has ever seen. Diaclone, famous for exotic colour variants, astronomical prices, unfathomable rarity and feverish collectors. Combine the two and you have probably the single hardest pre-Transformers and Transformers collecting arena to get a foothold in. Think about it, we could all probably score a prototype, Japanese G1 exclusive, Lucky Draw or a Joustra Diaclone at some point if we really tried, but with less than 20 confirmed Finnish Diaclones ever found, you could start and finish your collecting days and never catch a whiff of one of these.

We have already covered a few Finnish Diaclones in the Diaclone Abroad article last year, but this is our opportunity to look at Takara’s final fling with this toy line in one of the most unlikely locations imaginable. Available in 1984 and 1985, this short run of Diaclone Car Robots were exclusive to a Finnish kiosk chain called “R-Kioski” that still operates to this day. According to their website, in 1985 there would have been approximately 800 of these kiosks scattered about Finland. 1985 was the final year of Diaclone release in any country, including Japan, so what saw release through R-Kioski would have represented some of the last approved Takara Diaclone units. 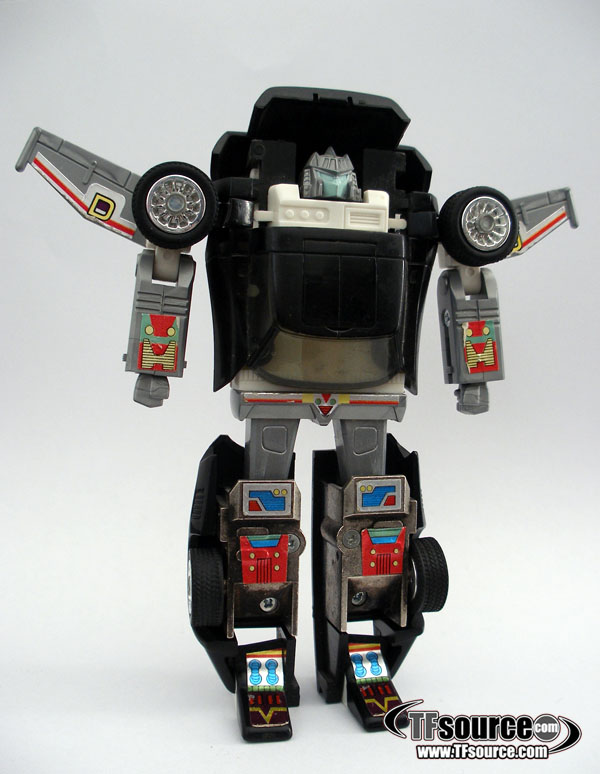 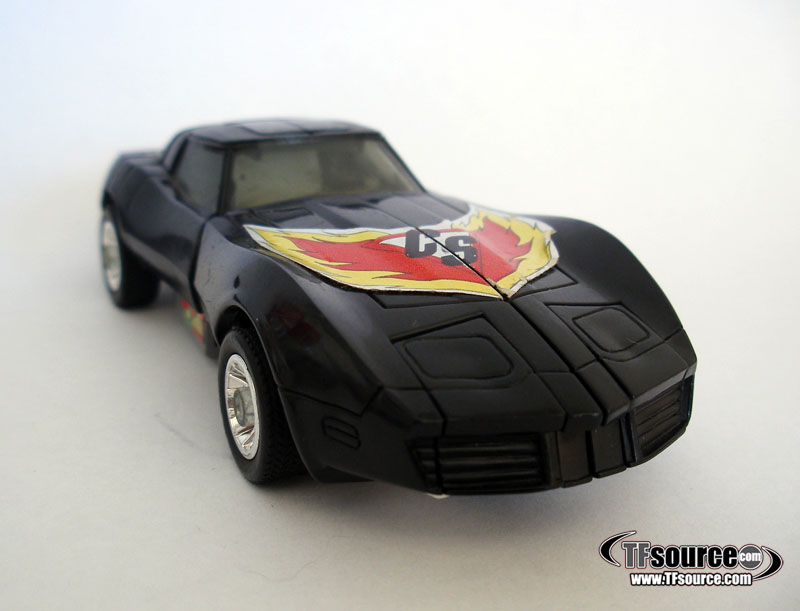 The poster boy for this group of legendary toys is the black Corvette Stingray, or ‘Black Tracks’. I’ve documented the history and legend of this particular variant a number of times both here and at TF-1, the bottom line being that Finland is the only country to have ever seen the original Corvette mould in black. The thing is, this toy is from such a late period in Diaclone history that it may even have been planned for Japan in these colours. No proof exists of that currently, but considering 2011 saw Japan’s first red-cabbed chrome Powered Convoy surface, anything remains possible. 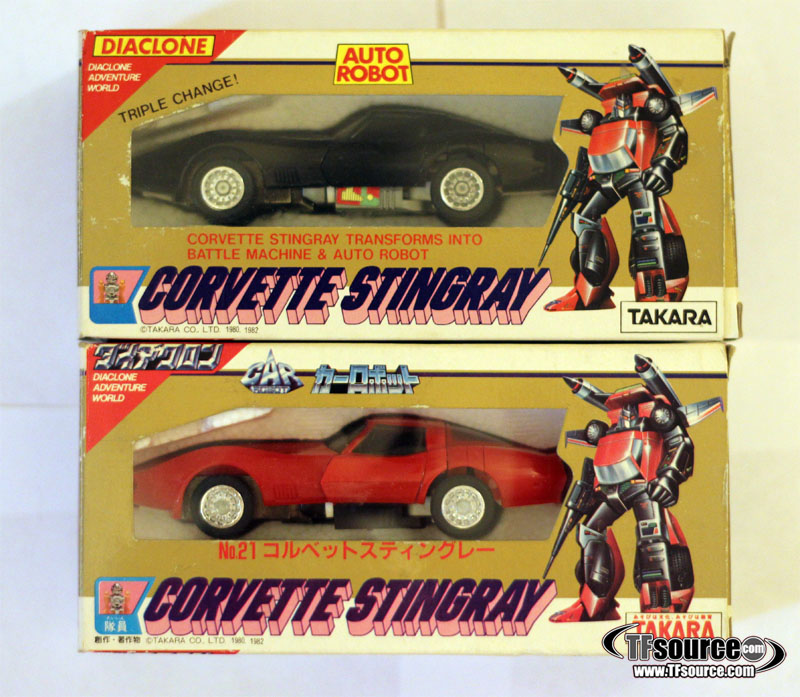 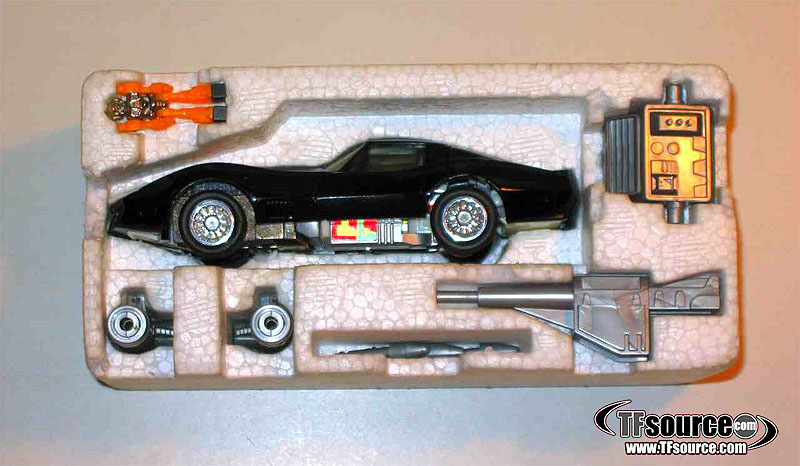 Finnish Diaclones - Japanese moulding and with Diaclone driver too

So far, the black Corvette has proved the most desirable and sought after of all Finnish Diaclones, not surprisingly as it’s the only one of the group that exhibits a unique variation. Ironically, it’s been the most commonly found of the lot too with 7 specimens known to be in collectors’ hands today. What makes these late releases so fascinating is that they are the same as the original Japanese moulds and come with Diaclone drivers, unlike most GiG Trasformer pre-TFs or Ceji Joustra Diaclones. All are Takara licensed, but these Finnish toys actually say “Diaclone” on the packaging. Notice how the handgun for the Corvette is the same long-stock variety seen only on the Japanese Corvette mould. 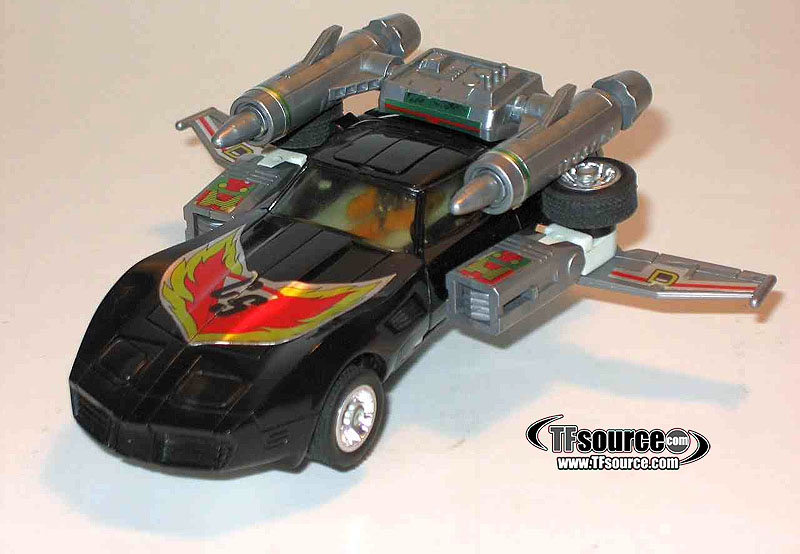 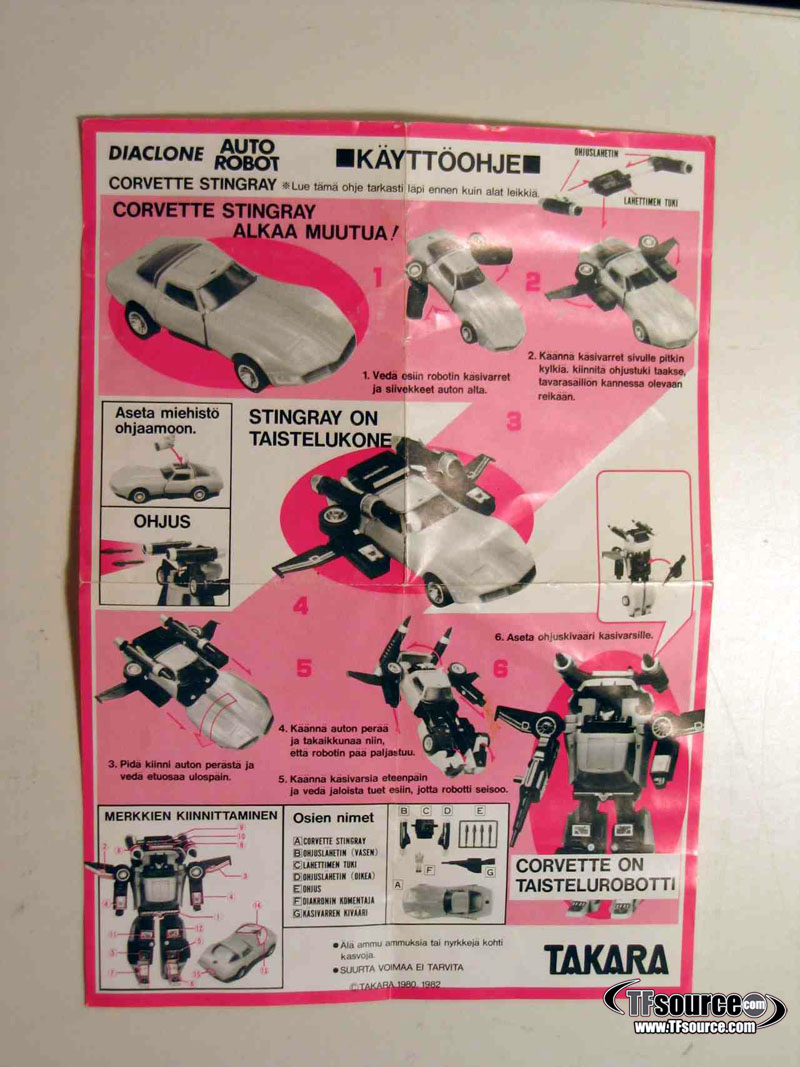 The instructions for the Finnish Diaclones featured the same graphics as the Japanese originals, but the text was now in Suomi. Stickersheets were identical to the Japanese Diaclone sheets, but there were no mini product catalogues included with the toys. Notice also the “Auto Robot” logo which is more commonly seen on Italian Diaclone GiG Car Robot packaging and paperwork. The reason for that will become clear as we move deeper into the sub-category.

Seeing as how the black Corvette commands the greatest interest, price tag and was the principal reason for collectors’ interests drifting towards Finland, is there nothing more of note to mention on the subject of Diaclone Finland? 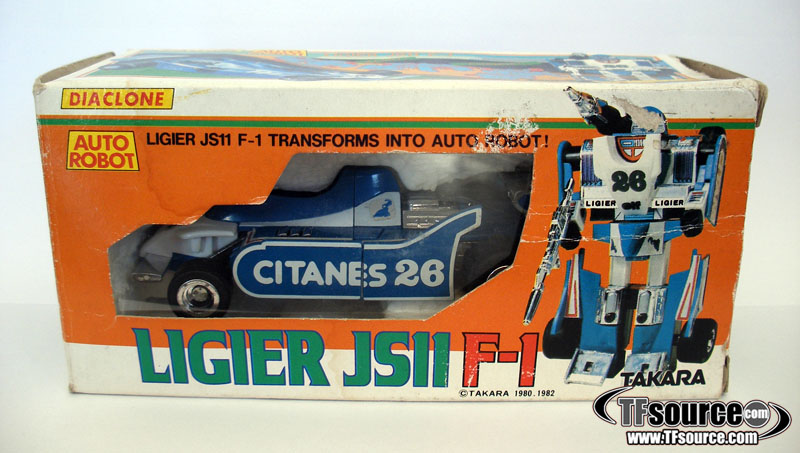 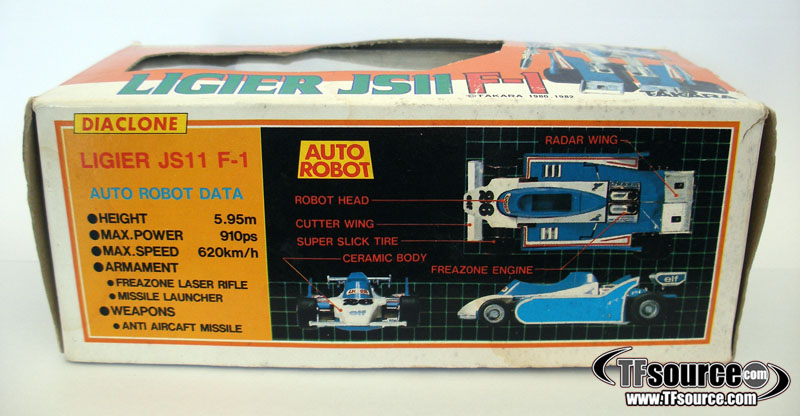 English text and an even further censored Ligier!

Of course there is! We’re not done deciphering the secrets of the packaging yet. For the first time, Diaclone packaging now featured an abundance of English text, especially on the technical specifications found on the bottom of the box. Careful analysis reveals that the side profile of the Ligier JS11 is completely blocked out in blue now; there is no “Citanes” (a deliberate misspelling of the French cigarette brand “Gitanes”) , and not even a “Ligier” (Italian GiG solution to the cigarette reference).

It appears that the packaging templates originate from Italy where modifications had already been made to the Japanese packaging, and since they could not undo the Citanes to Ligier change with no apparent access to original Japanese templates, they seemingly just blocked the whole thing out! This would also explain why the packaging resembles GiG Diaclone boxes so much, especially the red text in the yellow box for “Auto Robot” (unchanged) and “Diaclone” (formerly “Trasformer”). 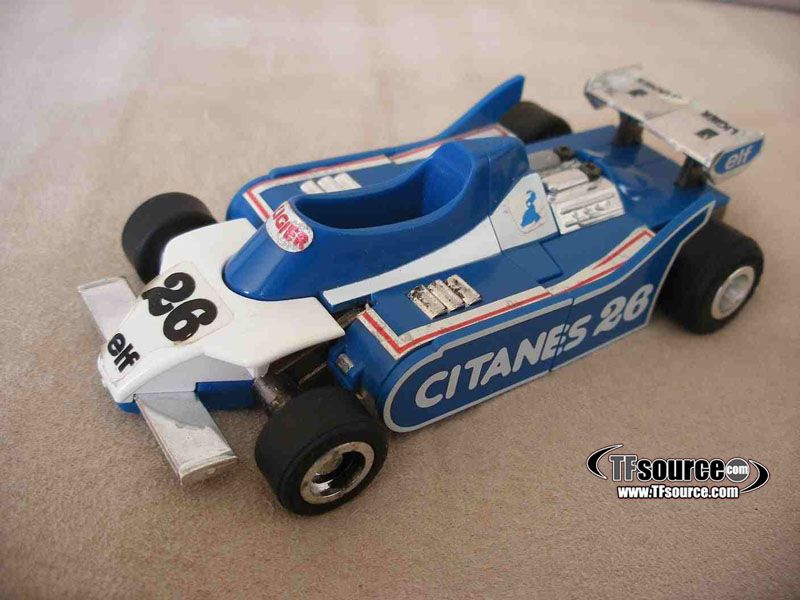 Unlike the packaging, the toy still says "Citanes"

In keeping with the trend so far, the Ligier toy is pretty much the same as the Japanese Diaclone. There is no censoring of the “Citanes” and the moulding is Japanese too. The Finnish Ligier release also included the driver, as did all the R-Kioski Diaclones.

So the moulding on Ligier and the handgun on Corvette Stingray give away their Japanese heritage, as do their copyrights. For a slightly more obvious sign of origin, we must look at the Finnish Diaclone Truck Crane:

Already one of the rarest Japanese or Italian Diaclones, only 1 Finnish Grapple has been found to date

More English writing on the specifications

The Finnish pre-Grapple is a very special piece, it was the first packaged Finnish Diaclone ever photographed and seen online, but curiously it showed up totally unused on Yahoo Japan Auctions of all places! Note the “Trausforms” misspelling on the front of the packaging. 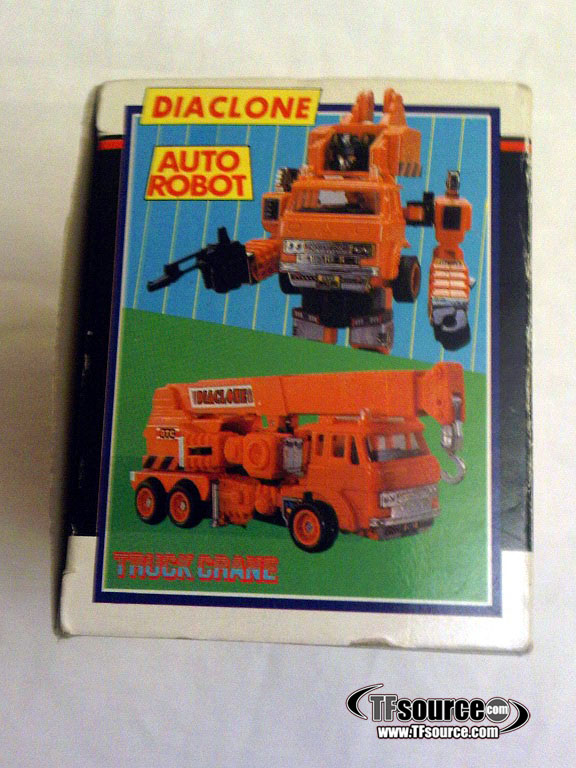 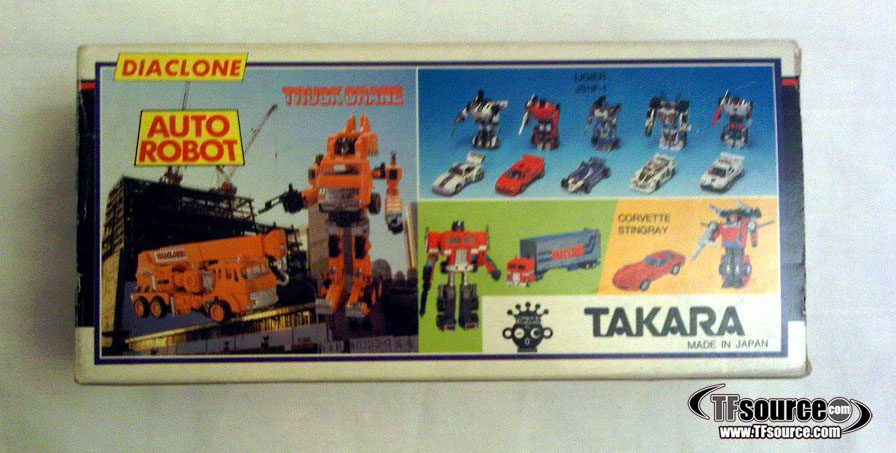 As time has gone on, the discoveries and connections that were waiting to be made from this Truck Crane’s packaging continue to reveal themselves. Look at the box back picture above, yes it shows a wide range of Diaclone toys but which are the only two items there which have actually been graced with designation text? “Ligier JS11 F1” and “Corvette Stingray”. Hmm, the plot thickens… 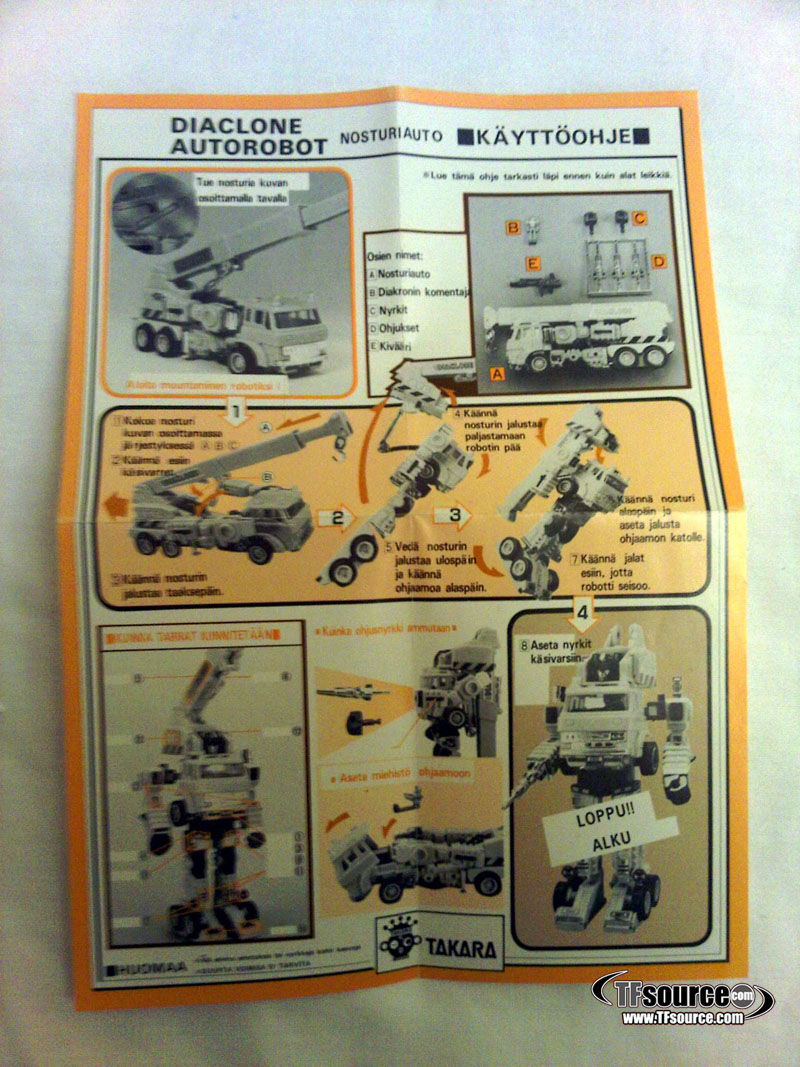 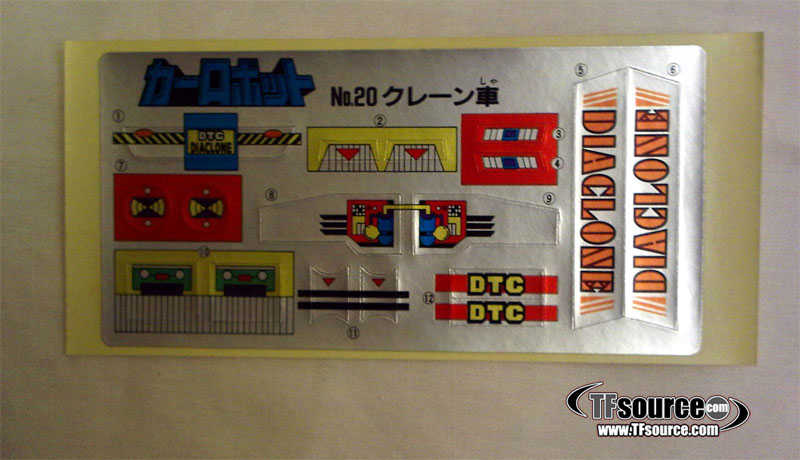 This Rosetta Stone relic of Diaclone, through its paperwork, allowed us to see for the first time that Takara’s finest had made their way as far as Finland. The language on the instruction sheet, the Japanese moulding and stickersheet, it was the appearance of this very Finnish Truck Crane that helped us start unraveling the previously unknown origins of Fumihiko Akiyama’s legendary black Corvette Stingray. And on the subject of moulding… 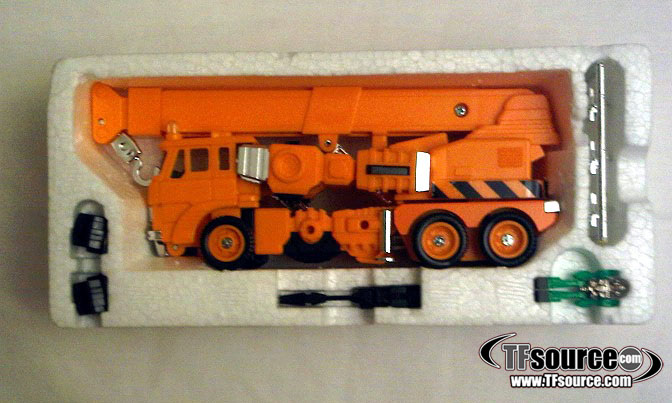 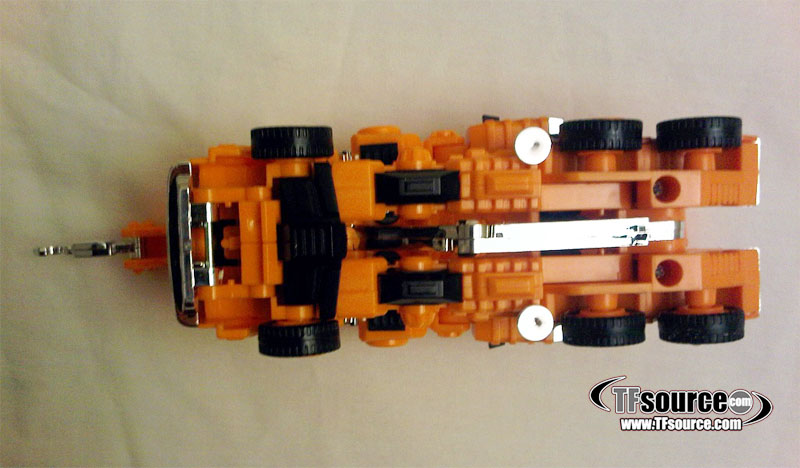 It's all about the stuff between his legs

The Truck Crane toy itself was revealed to be of Japanese moulding and feature, the chrome neck arm previously thought to have been a Japanese Diaclone-only addition. So it seems that the toys were shipped directly from Takara to Finland along with their stickersheets, and the packaging was altered for Finnish release based on GiG templates. These toys also have proper firing launchers and missiles, no safety modifications were made. Again, very Japanese Takara Diaclone-esque. 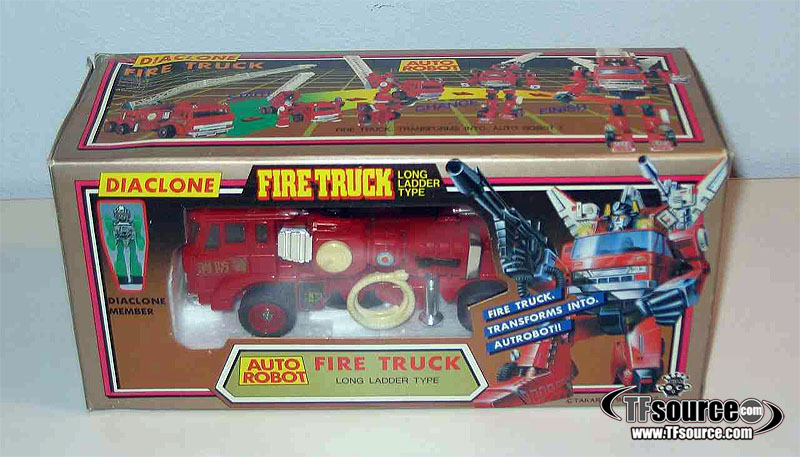 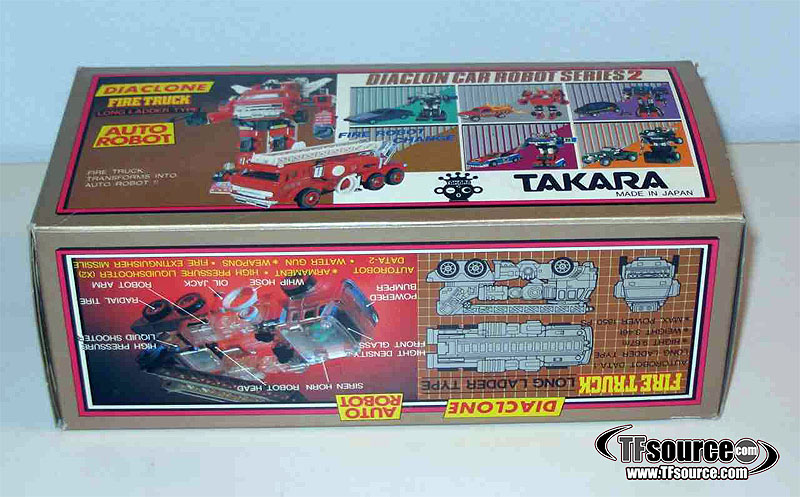 The Finnish Diaclone Fire Truck shares much of the same attributes as the Truck Crane, including the chromed neck arm, Japanese moulding which includes the Mitsubishi FUSO detailing on the front of the vehicle cab and Japanese stickersheet. Once again you can see the abundance of English text on the box. 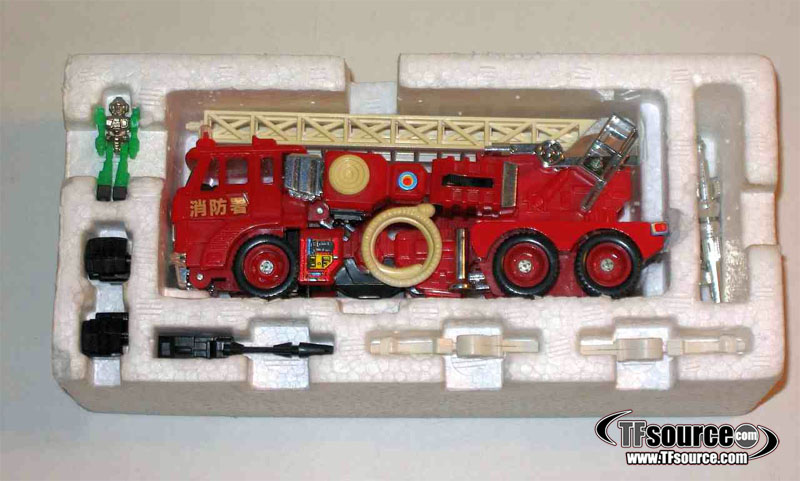 Even yellowed these are priceless 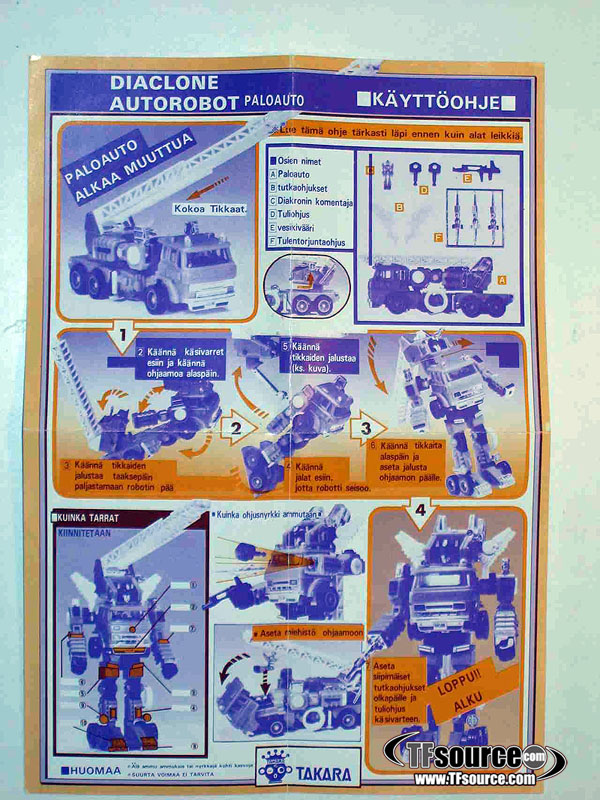 Not so much English text here

Quite a common Japanese Diaclone and Transformer, it can be hard to wrap your head around the fact that the Finnish Diaclone Fire Truck is as rare as they come, only one packaged sample having been found to date. Of course that is true of the Ligier and Truck Crane as well, so he’s in relatively good company. Considering their collective rarity, we’re actually incredibly fortunate to have seen at least one packaged specimen of each Finnish Diaclone known to exist, and all with paperwork too.

This unique packaging comparison between the Finnish, GiG and Japanese Diaclone Fire Trucks shows that the apparent usage of Italian box templates is a little too convenient a theory to lean on. The Finnish Fire Truck box may borrow the yellow and red text boxes from the GiG template, but the “Fire Truck Long Ladder Type” text at the top of the box is straight off the Japanese Takara box, as are the blue text boxes on the robot artwork. Since this toy contained the driver for Finnish release, the associated Diaclone driver graphics have been left intact. So maybe there was access to Japanese templates after all, and a hybrid format was decided upon. 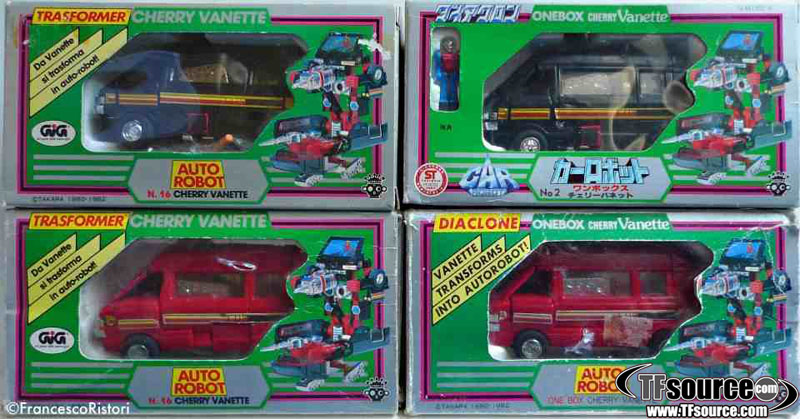 Our last stop on this Diaclone-inspired tour of Finland is the Onebox Cherry Vanette, thought to have been released in both red and black in Finland, although only a red packaged specimen has been unearthed thus far. The above comparison again demonstrates the hybrid-style packaging used in Finland, borrowing the “ONEBOX Cherry Vanette” text at the top from the Japanese release, but using the GiG template for much of the rest of the box front. 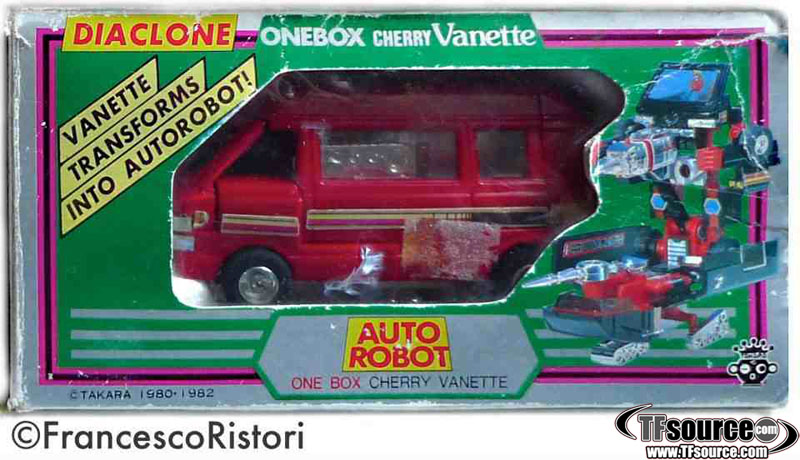 Again, not traditionally a desirable mould, but this is a different story 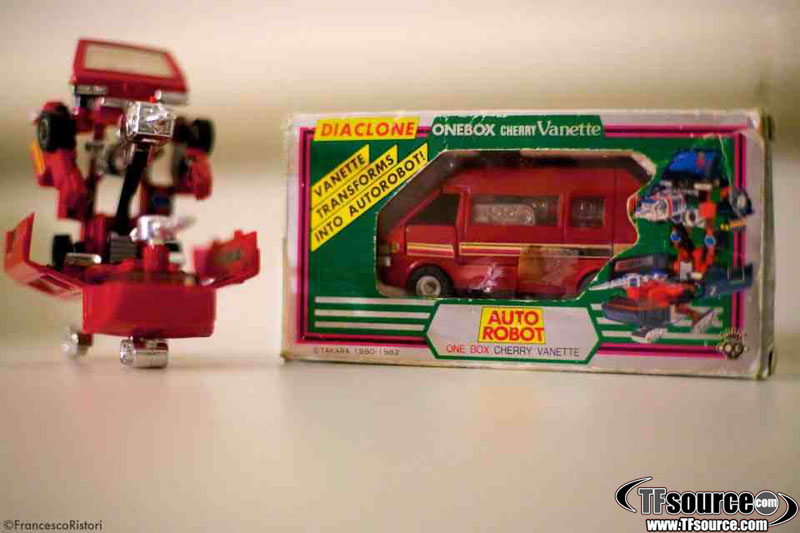 A strange one for sure, Finnish Diaclones like the red Vanette and the black Corvette create a degree of conflict in all available theories attempting to explain just what the rationale and method was behind the R-Kioski store exclusive gems. In the case of the Ligier, Truck Crane and Fire Truck they are clearly just Japanese toys and accessories placed into Finnish boxes with understandable modifications made upon existing packaging templates. But the red Vanette and black Corvette with Japanese moulding and “TAKARA JAPAN” Japanese stampings imply really late colour variants, but variants that have never been seen in Japanese packaging. Were they planned? Maybe, but then these started coming out in Finland in 1984, not the super-late 1985 stuff like chromed Powered Convoy or red Ligier etc. 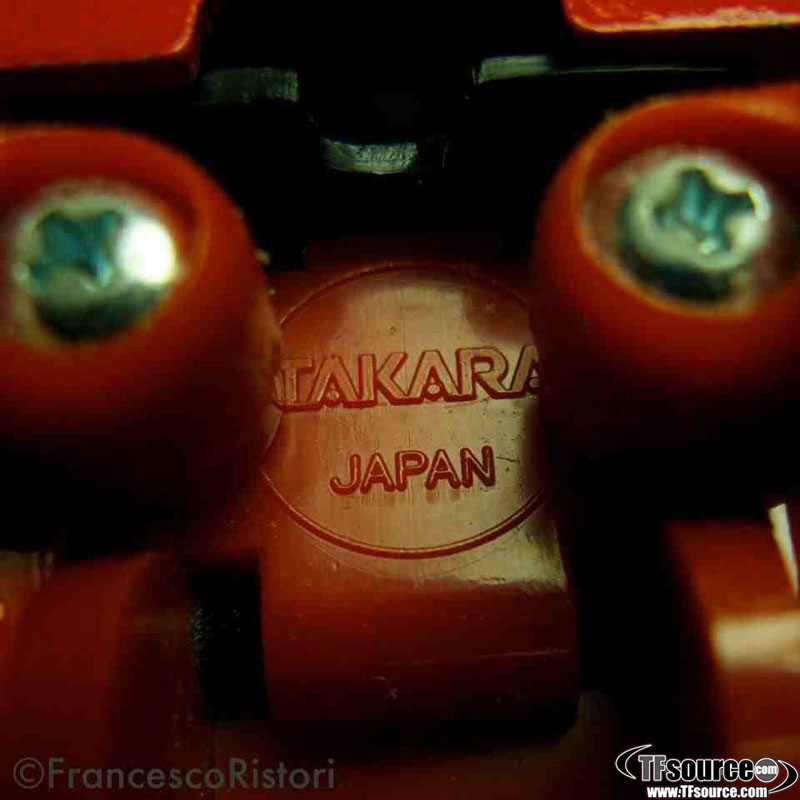 Since the Vanette was available in the standard Diaclone black, but also in the GiG Italian-like red as well (implying that TF Ironhide was not the primary reason for a red Vanette), could the Corvette Stingray have also seen release in the normal red Diaclone colour in Finland? Is it so far-fetched to think that when the deal was struck between Takara and R-Kioski, the Finnish retailer secured the rights to an exclusive colour variant like the black Corvette?

Whatever the answer to these questions, I feel that one thing is becoming more and more clear as the evidence mounts, and that is the Finnish Diaclone line was more than likely limited to just the above five moulds. The first clue was the box back on the Truck Crane only naming Corvette Stingray and Ligier as available toys, thereby implying that the other advertised items like Porsche 935, New Countach LP500S, Lancia Stratos Turbo, Battle Convoy and Fairlady Z did not get released in Finland. The second clue was this…

This truly magnificent short TV spot for R-Kioski shows a Micro Change Watch Robo and then all 5 of the Finnish Diaclone Car Robots we have seen in this article, and no more. A television advert for a Diaclone Black Tracks, who would believe it! Apparently these TV spots were pretty common for R-Kioski, especially in the evenings when they were cheaper to run.

So there you have it, what appears to be a complete run-down of the Takara Diaclones available in Finland between 1984 and 1985. The title of this article was based on the famous Finnish Rally event, known for years as the ‘1000 Lakes Rally’. Interestingly, that event has only 5 times been won by a non-Finn or non-Swede, victory often ending up in the hands of Finnish Rally legends like Marcus Gronholm, Tommi Makinen or Juha Kankkunen.  It should come as no surprise then that of the 6 non-Finns who are known to own a hugely exclusive Finnish Diaclone or two, 5 of them also own a Powered Convoy DX set. Those are the club rules, good luck gaining admittance… 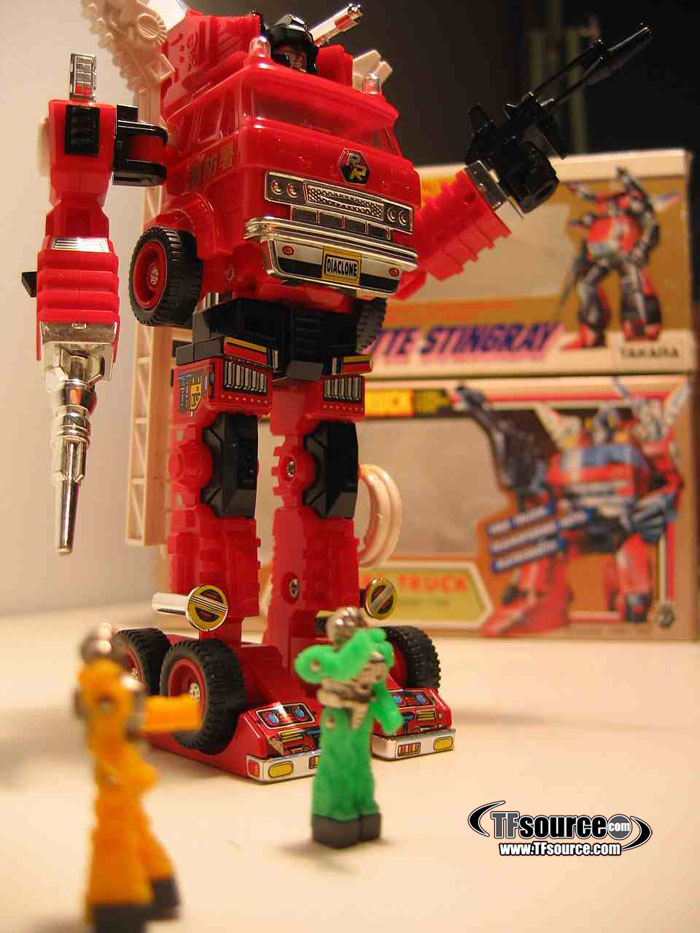 My gracious thanks to Francesco Ristori, Tomi Kivela, Martin Lund and Gordon Yip who made this article possible with their priceless contributions. I dream of one day joining the Finnish Diaclone card holders club!