Early Days of US G1 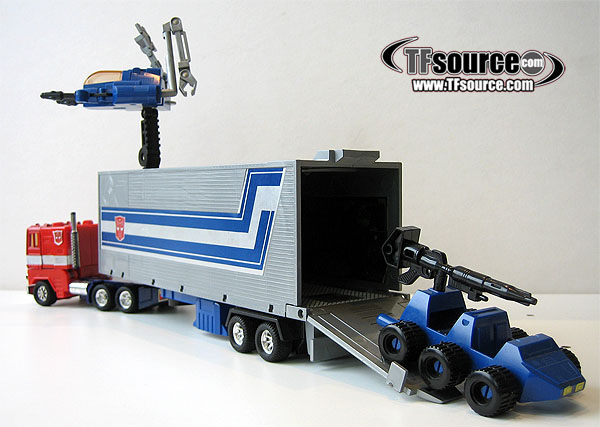 When trying to establish a respectable and interesting Transformers collection, it’s understandable that folks become lost in the world of foreign variants, exclusives and exotica, or obscure packaging oddities. It is easy to forget the venerable G1 toys of North America. With all the crazy inconsistencies in early Transformers paperwork, it should come as no surprise that some of these early G1 toys from North America were a touch different too.

One of the most vivid childhood recollections of people who used to own Transformers is the experience of activating the heat sensitive rub symbol, or ‘rubsign’. These faction identifiers were introduced as a way of verifying the authenticity of the Transformers being sold. However, in 1984, the first assortments of Transformers sold in North America did not feature these rubsigns, and so are referred to as ‘pre-rub’ Transformers by collectors and enthusiasts. 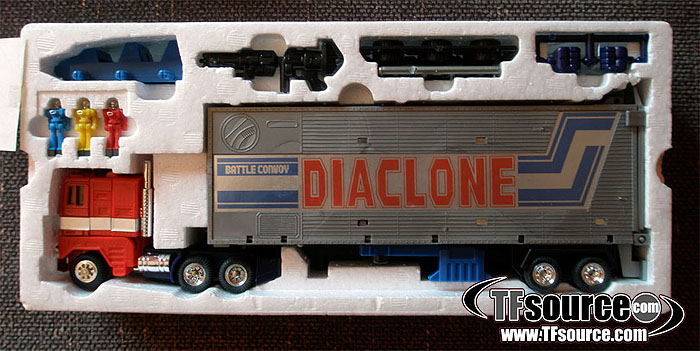 If you’ve been doing your homework and reading our Diaclone pieces recently (or, you know, if you can read period) you’ll know that the toy above is a Diaclone and not a Transformer. It is the original version of the toy we all know as “Optimus Prime”, the Diaclone Battle Convoy. The main noteworthy features of that Battle Convoy in the context of this article are the light blue colour of the Roller and trailer parts, the bloated accessories, metal plates in the trailer and grey missiles. The reason these features are important is that, understandably, the earliest Transformers promotional material featured Optimus Prime mock-ups, prototypes and samples which closely resembled the Battle Convoy….but not how you might imagine: 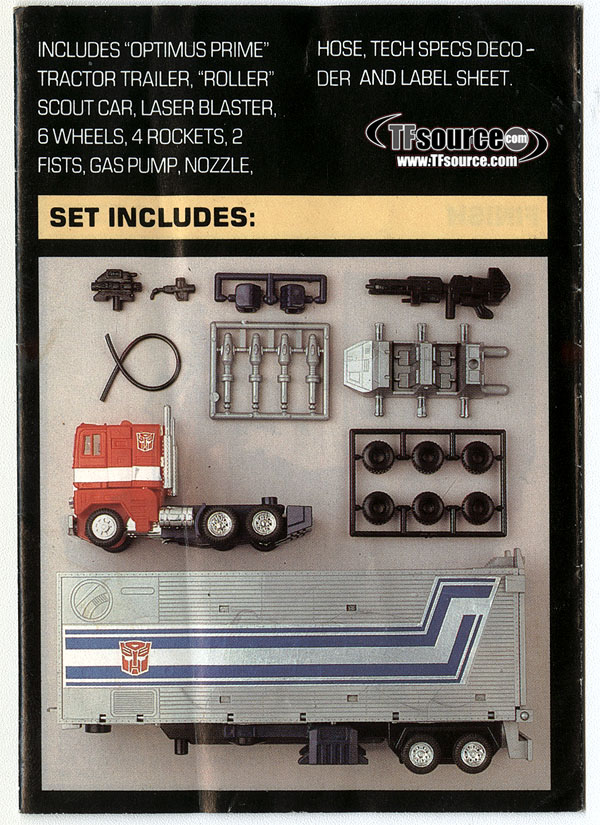 Mock-up Transformers Optimus, probably heavily based on a Diaclone

Here we have a scan of the Transformers Optimus Prime instruction booklet, showing one of the mock-ups used for early TF photography. With fresh Autobot stickers applied to the trailer probably covering up the “DIACLONE”, you can still see the metal plates, bloated accessories and grey missiles. Interestingly though, notice how the Roller is no longer light blue but grey, and also that the trailer parts are now dark blue instead of light blue. In fact the Roller looks a little like painted resin, the two long pegs were a new TF-only addition after all.

Quite often the grey-Roller bloated-parts metal-plates Optimus Prime is quoted as being the first true version of the Autobot Commander. But this is a statement that I challenge, and one of the reasons I challenge this is because too often collectors believe that the grey Roller Prime is just a rebadged Diaclone in Transformers packaging, but where are the light blue trailer parts and the light Blue Roller? Well, they ended up here: 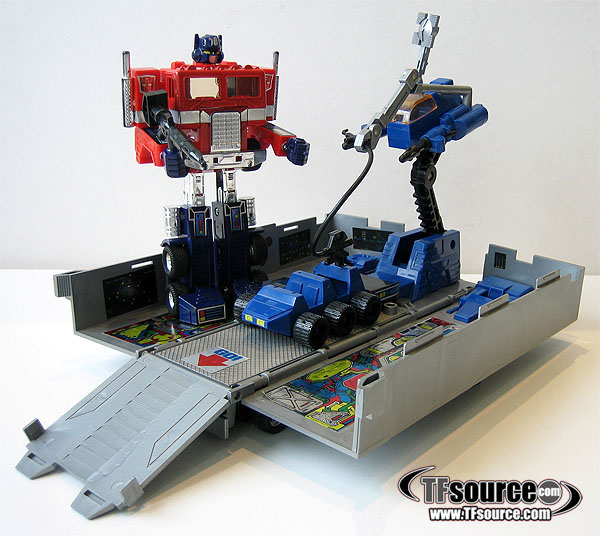 And even moreso from inside

Here we have another early pre-rub Optimus Prime version, with light blue Diaclone-coloured Roller and trailer parts. However, this Prime variant does not have metal plates or bloated weapons. It doesn’t even have the grey missiles. Quite often the moulding on the red cab is closer to later Optimus variants than the Diaclone moulding too, so it’s not a surprise that most believe this to be a later release. The thing that makes this hard for me to accept is its packaging: 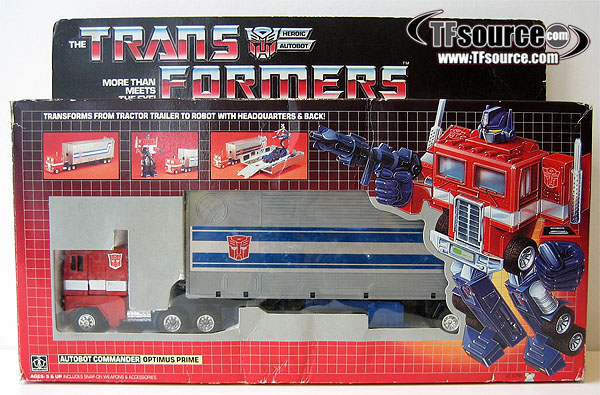 Notice anything out of the ordinary? No? Then let’s compare to a regular Optimus Prime: 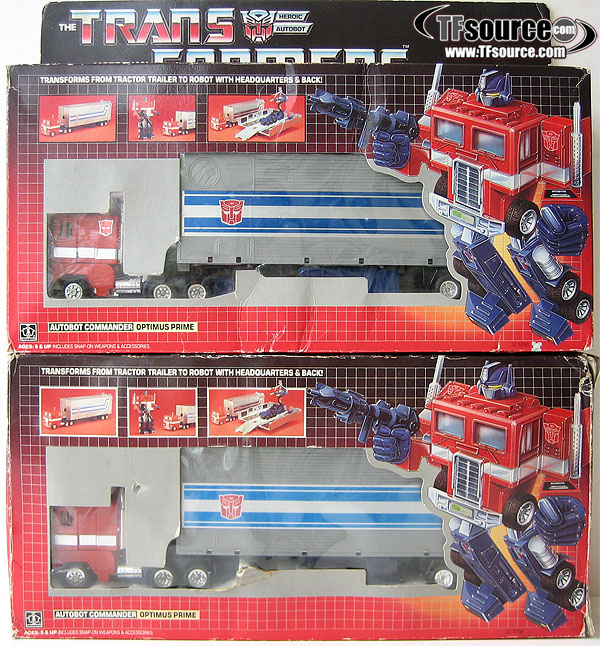 Still can’t see it? How about now… 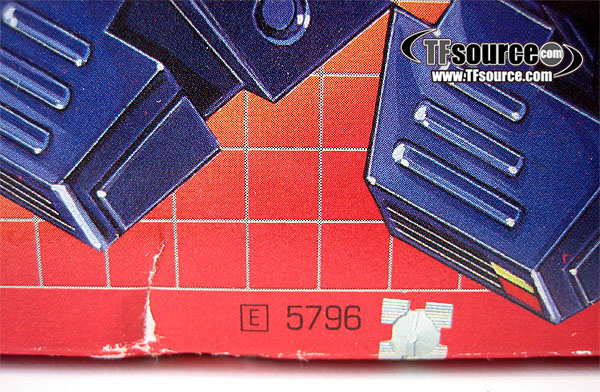 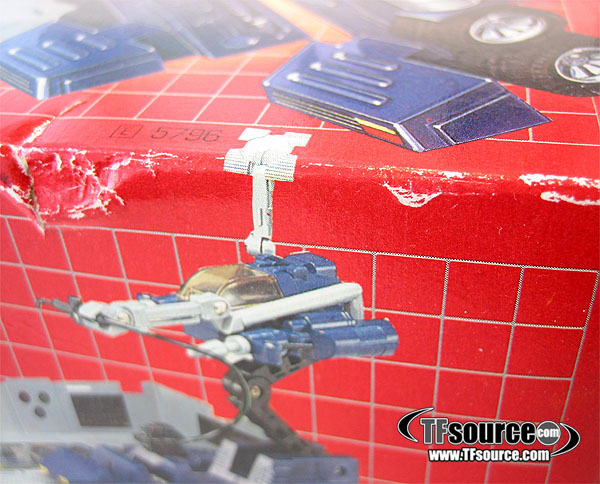 Time for a slice of 80's photoshopping

This very first version of Hasbro’s Optimus Prime packaging featured an error in printing whereby the radar from Prime’s command centre appeared on the box front, just under the artwork’s feet. That section of the stock photography should have been cropped and remained confined to the underside of the box. This is sometimes referred to as an ‘error box’ Prime.

Now this is not a hugely rare packaging variant, I tend to see one on eBay every week. Not surprising at all, can you imagine how widely and successfully the first release of the Autobot Commander Optimus Prime would have sold in North America considering the massive amount of hype and hysteria The Transformers were creating at the time?

No white borders, and all of a sudden Prime has dark blue Roller and trailer parts 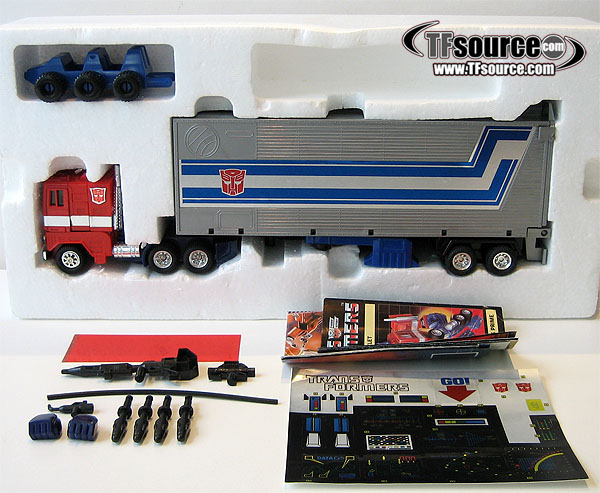 Oh so close to Battle Convoy

Another distinguishing feature of this early error box is that the stock images of Prime on the box front have no white border around them. There are other little differences too, but more importantly, this is not the only version of Prime to come in the error box…the grey Roller bloated metal plate Optimus also comes in this early error box packaging. So which came first? 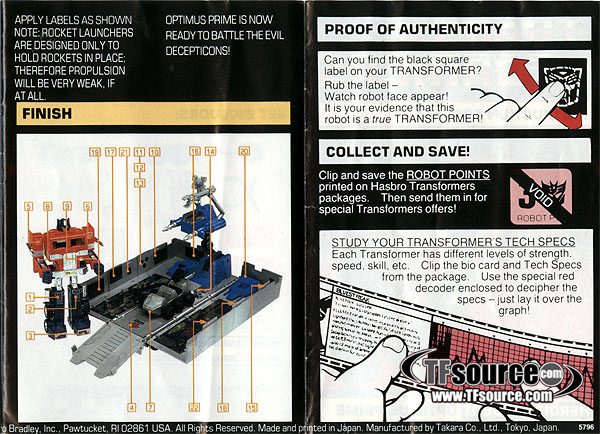 Considering the fact that the grey Roller version shares more characteristics mould-wise with the Diaclone, it’s easier to believe that version was the first, but the grey Roller version also came in later corrected packaging too, the light-blue parts Optimus is only available in the error box. The truth is, we may never know which was absolutely first because the sheer volume of Primes being put out in 1984 would have been so huge that different factories may have been doing different things simultaneously. It’s never as cut-and-dry as you would hope. It’s almost as if the Diaclone Battle Convoy was split in two, and these two variants of pre-rub Optimus Prime shared its genetics. 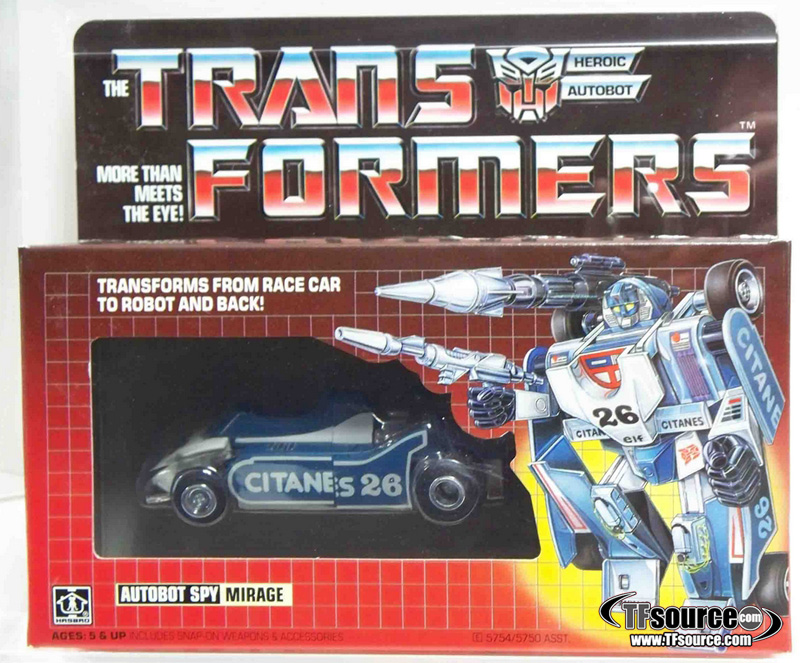 One of the more common 'no-grey' Transformers

We’ve talked about pre-rub, but there’s a sub-category of those toys that some collectors refer to as ‘early pre-rub’. Like the error-box Prime, these are considered to be the absolute first Transformers out of the factory doors back in 1984. However, that’s not to say that every factory was doing the exact same thing at the time, as mentioned above, nothing is ever that simple with Transformers. The sealed 1984 Mirage you see above is an interesting specimen; look at its artwork. Between the artwork and the cellophane window you can see the red-to-yellow grid pattern which covers the whole box. Why is this special? It’s special because a vast majority of 1984 to 1985 G1 TFs do not have the grid pattern between the art and the window, they have a section of grey cardboard! The following comparison of Sunstreaker boxes demonstrates this clearly: 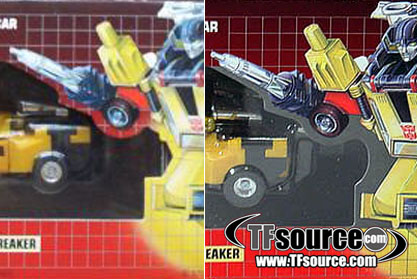 Now, not all 1984 Transformers have been found to exhibit this ‘No-grey’ packaging. So far I’ve seen Prowl, Bluestreak, Sunstreaker, Ironhide, Mirage, Trailbreaker, Starscream and Thundercracker in this fashion. Much to my frustration, these are usually rare and expensive (not to mention MISB and AFA degraded), so I have not had the chance to examine them closely for variations and leftover Diaclone features. I was lucky enough to get my hands on an early pre-rub Thundercracker though, and that was seriously interesting… 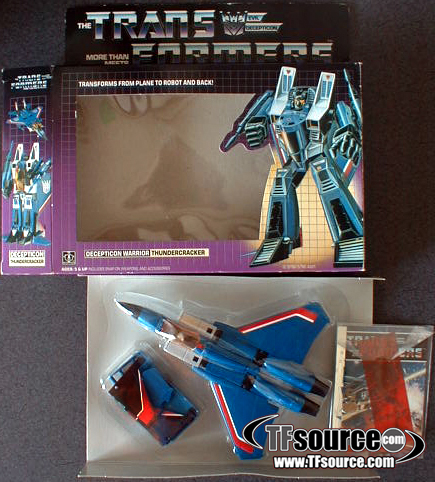 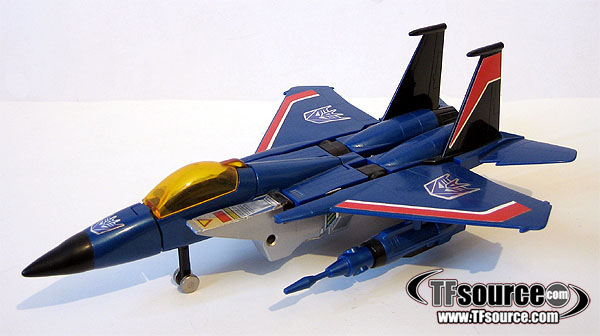 Don’t worry, I didn’t break open the sealed Thundercracker you see above, that’s just been included because it shows the no-grey packaging. This loose early pre-rub Thundercracker has mostly normal pre-rub jet characteristics like a smooth canopy. What’s remarkable about it though is the fact that it has absolutely no copyright stamping (just like the Diaclone Thundercracker), and the fact that its wing points have been MANUALLY sanded down at the factory, and so are really rough to the touch! 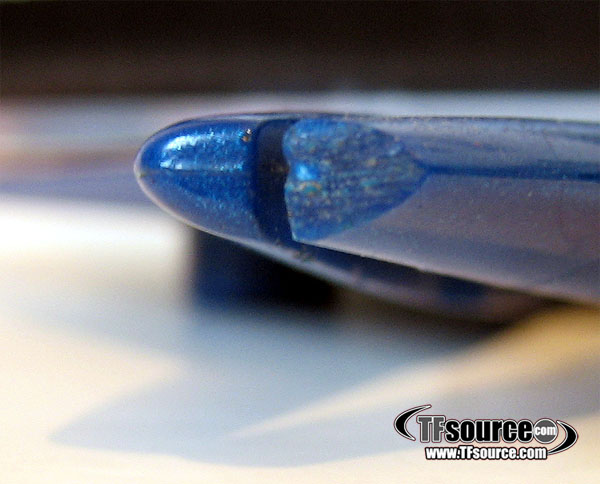 The wing point on the left is from a standard Thundercracker, and the one on the right is from the sanded-down version. These would have been hand-sanded because the Diaclone mould for the F15 Eagle had super-sharp wing points, and Hasbro were never going to let that through their safety filters. Subsequently, the wings were manually altered until the mould for Thundercracker was updated. This is clearly one of the absolute first Transformers Thundercrackers out the door, or just a release from a factory who received their updated jet mould later than the rest. It should be noted that I got this Thundercracker in exactly the same lot as my first light-blue error box Optimus Prime. 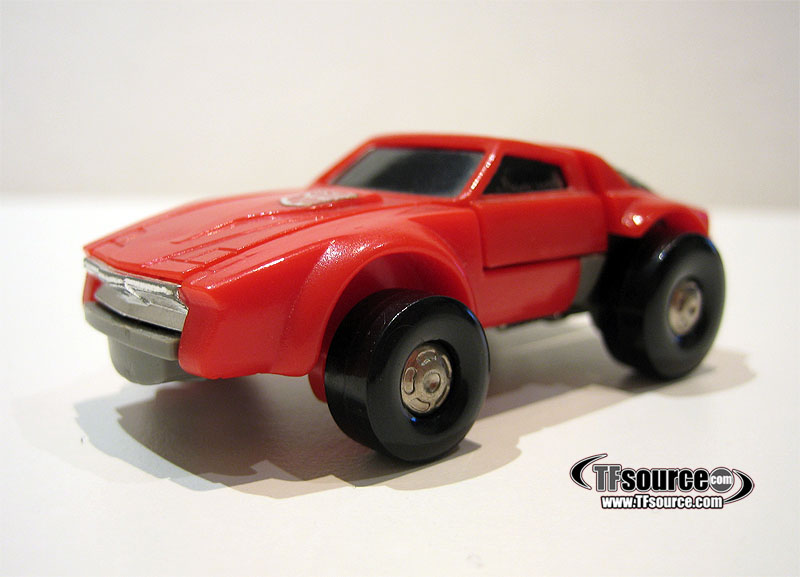 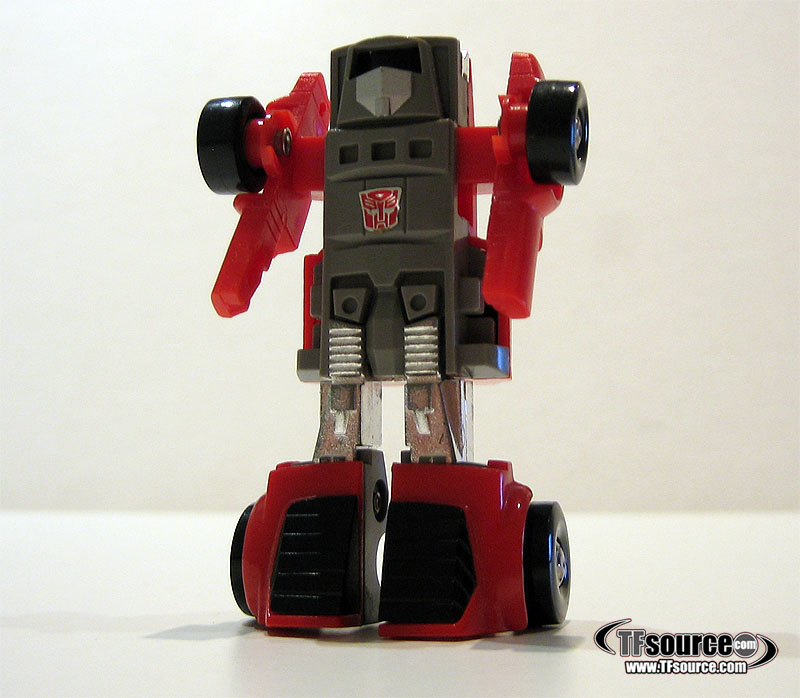 Notice the crisp borders on the Autobot symbol

As with a lot of these really early Transformers, it is not immediately apparent what makes this little guy so special. For that, we need to place him next to a later pre-rub Windcharger: 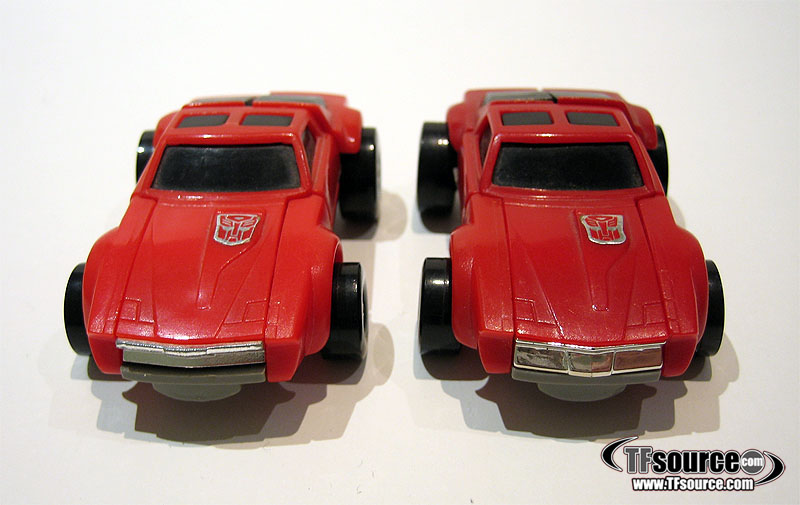 Try spotting that grill in an auction. Heck, try finding a MOSC '84 Windy at all...

Not only is the early pre-rub Windcharger a lighter shade of red, but his chrome grill at the front is assembled upside-down! The lighter colour can be easily explained since the pre-Transformers Micro Change version of the toy was a similar light red, but the upside-down grill must be a factory error or rush job. The factory Autobot stickers on the early pre-rub Windy are also slightly different. As with all of the early pre-rub toys featured, the Windcharger’s copyright is exactly the same as its Diaclone/Micro Change predecessor, simply “TAKARA JAPAN”. The Thundercracker of course has no copyright, just like the Diaclone F15. 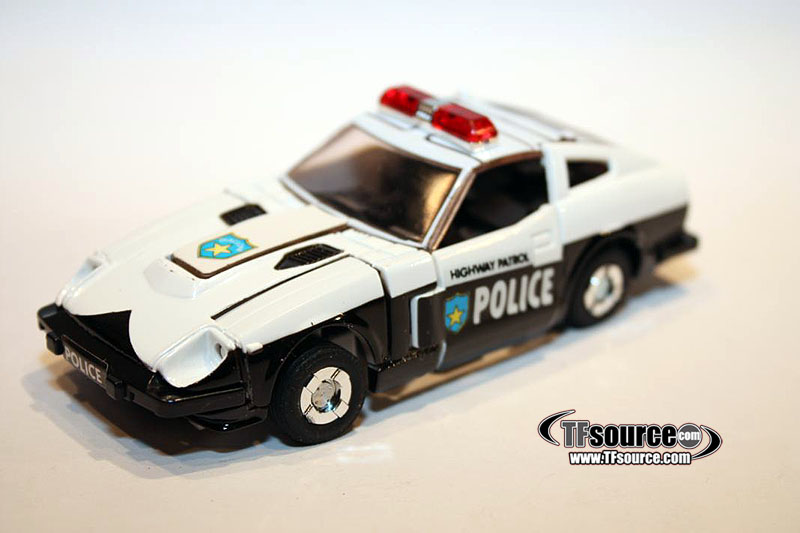 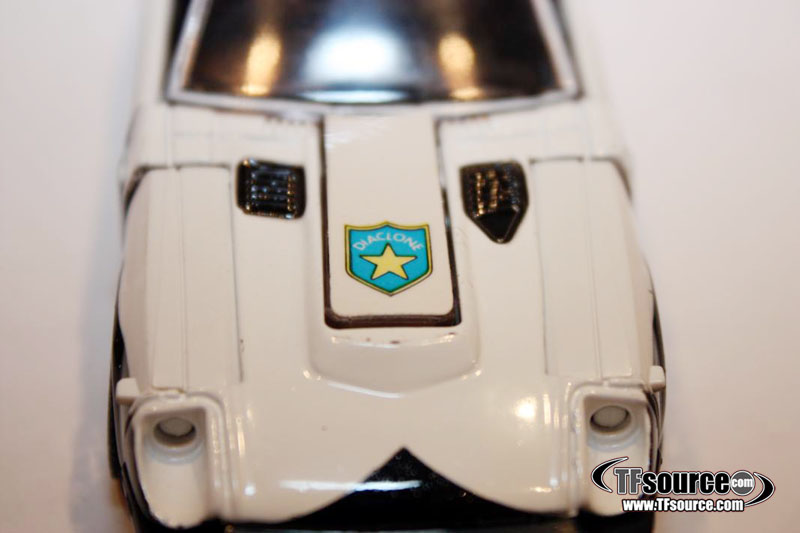 This previously MISB Prowl still says “Diaclone” on its hood sticker, even though the red shield has been removed from inside the yellow star. Similarly stamped “TAKARA JAPAN” like the other early G1 toys, this Prowl should not be confused with the 1989 European gold boxed ‘Classic Heroes’ Prowl that said “Diaclone” on its hood and door stickers too. So you would expect this Prowl to have come in an early pre-rub no-grey box too right? 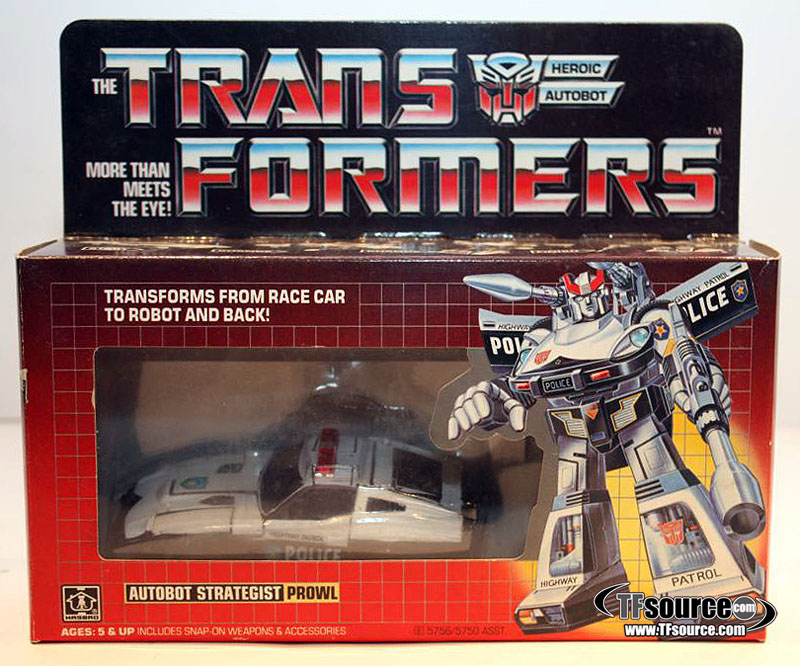 Wrong. Hasbro were never going to make this easy for us. But then again, since the grey-Roller Prime came in error and corrected boxes, it shouldn’t be surprising that variants exist for other popular and prominent G1 toys such as Prowl. Plus, you cannot ever forget that many factories producing these toys simultaneously would not have had the precise same output. You can often find light-blue parts Optimus Primes with Diaclone mould red cabs.

Picture a massive conveyer belt of these things in a factory with rapidly emptying parts bins being used to assemble them. There’s bound to be inconsistencies and variations. All we can hope for is the establishment of a general chronology, timeline and series of events, and with more and more evidence being uncovered as the years roll on, there are undoubtedly a few more surprises waiting. After all, a Hasbro employee once let slip that some blue Bluestreaks did leave the factory in Transformers packaging… 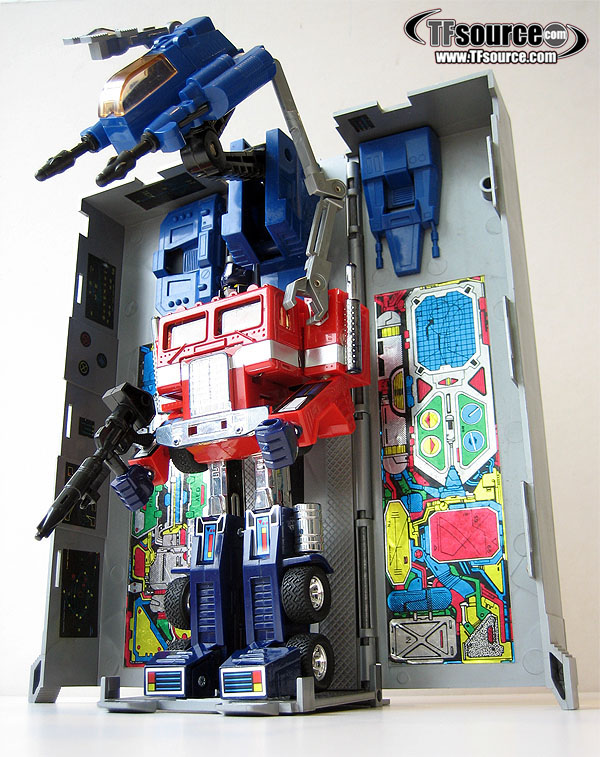 Not a Hasbro Blue Bluestreak

Many kind thanks to Paul Hitchens for the use of his pre-rub “Diaclone” Prowl pictures, to Alessandro Musconi for his Battle Convoy photo and to Himawari for his ‘no-grey’ Thundercracker image.

Early Days of US G1